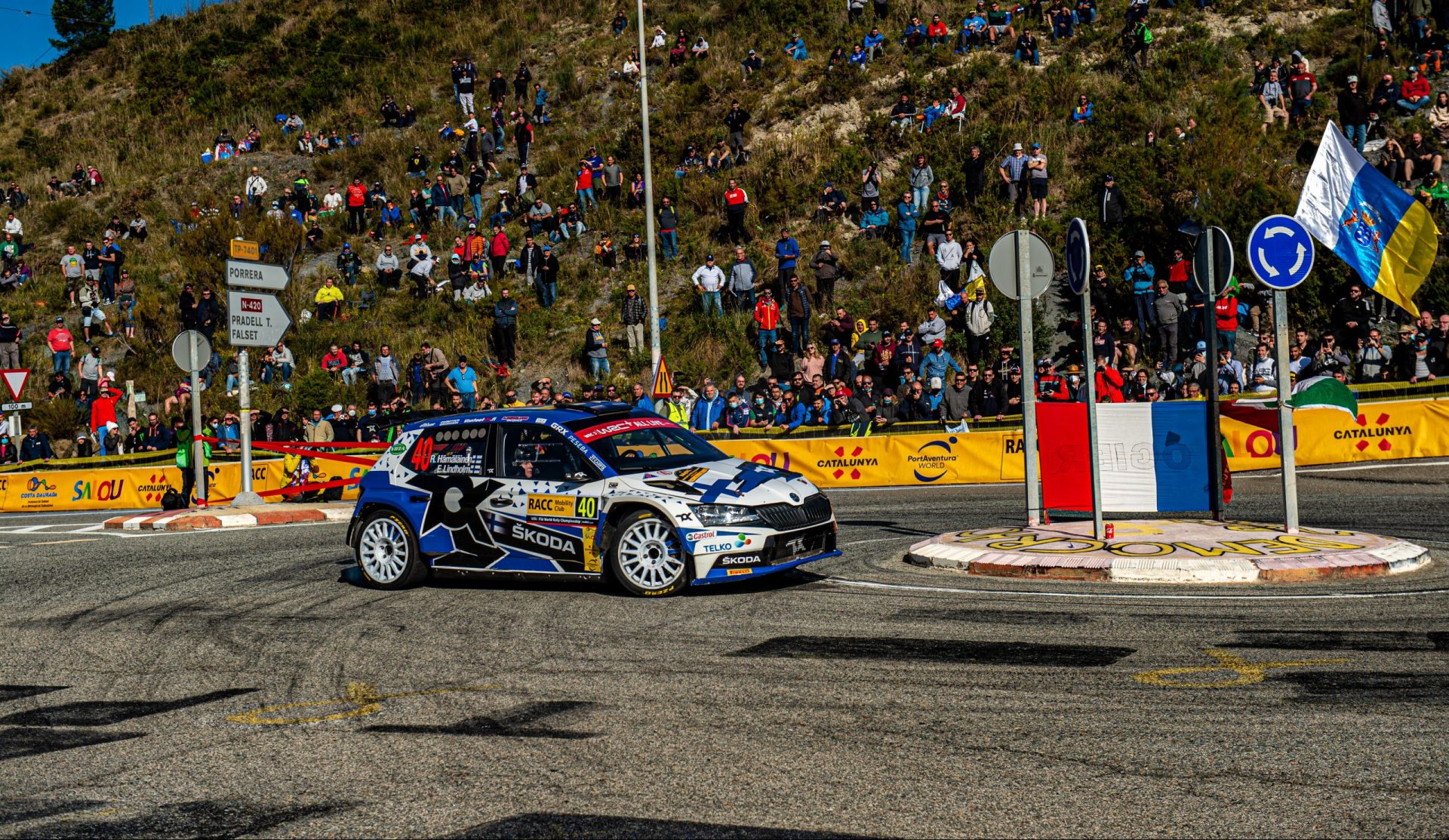 A classic in a new coat | RACC Rally de España

The penultimate round of the World Rally Championship (WRC) took the crews to a well-known, yet new this year, Spanish rally. The event, previously known for its unique combination of gravel and tarmac, has now switched to a pure asphalt format.

The RACC Rally de España is one of the constants of the WRC calendar. However, its form has changed over the years. Initially a pure asphalt event started its long history in 1957 and a few years later, in 1975 to be precise, it became part of the European Rally Championship (ERC). It entered the ranks of world-class events as a pure asphalt event in 1991. The centre of the action at that time was the Catalan town of Lloret der Mar on the Costa Brava, until 2002, when the competition moved south of Barcelona to Salou. But the biggest change came in 2010, when the still purely asphalt event was transformed into a single event that was run on both gravel and asphalt surfaces. Friday's 75-minute services therefore took on a whole new dimension, as it was no longer just the normal service tasks we had been used to. The mechanics were tasked with converting the car from gravel to asphalt specifications in such a really short time, which was appreciated by any keen rally fan. You just don't get that kind of spectacle anywhere. For the team, however, it was a thrill until the second day. Of course, the mechanics had the change of specifications in their grasp, but it was only during the first stage on Saturday that it became clear whether everything had gone well. So there was certainly no space and time for even the tiniest mistakes.

This year's RACC Rally de España has returned to its pure asphalt roots after 11 years. However, the event has certainly not lost any of its appeal. The smooth but abrasive asphalt does provide a good grip, but in warmer temperatures crews have to keep a close eye on tyre wear. What is also tricky is the dirt that gets on during "cutting" corners. This turns previously adhesive surfaces into slippery ones, and drivers have to keep an eye on how the spots look after cars passes in front of them. Another annoyance that crews may encounter when "cutting" corners is punctures. Drivers have to be very careful not to destroy a tyre on the exit of the cut just on the edge of the tarmac. At that point, the saving of precious tenths of seconds turns into a gain of several tens of seconds, during which the crews change the wheel. The completely new scheme of the first day of competition was also a big challenge for all participants. It consisted of one completely new special stage and two stages that had last been run before 2014.

This year, 30 Rally2 group cars were involved in the battle for victory on the Spanish tarmac, and exactly half of them were crews driving ŠKODA FABIA Rally2 and Rally2 evo cars. The WRC2 category, however, was once again held without its overall leader, Andreas Mikkelsen. He decided not to compete in Spain because, according to FIA rules, only six results from a maximum of seven races count towards the final ranking. Even his ŠKODA Motorsport-supported Toksport WRT teammates Marco Bulacia/Marcelo Der Ohannesian could no longer score points in the WRC2 category. However, he still decided to compete in this event, primarily to gain further valuable experience on asphalt. "After the gravel events, I am looking forward to the Spanish asphalt rally. Test drives on asphalt and the Rally Bohemia, which is part of the Czech Republic Championship, have given me a lot of confidence in my ŠKODA FABIA Rally2 evo. I will definitely be aiming for another good result," said Bulacia before the start of the rally. The WRC3 category was once again very competitive. Runner-ups Kajetan Kajetanowicz/Maciej Szczepaniak were both tasked with gaining the necessary points to move into the category lead. However, other crews with ŠKODA cars were also aiming for the top spots on Spanish roads namely 2019 European champions Chris Ingram/Ross Whittock, local heroes Pepe López/Borja Odriozola and newly crowned Finnish champions Emil Lindholm/Reeta Hämäläinen, who won the category at the previous Rally Finland. The RACC Rally de España was also the world premiere for Czech youngster Dominik Stříteský and his co-driver Jiří Hovorka. "I am delighted to be able to compete at the highest level for the first time thanks to ŠKODA Motorsport. For me, it's all about learning how rallying works in the WRC," said Stříteský.

The RACC Rally de España kicked off on Friday 14th October with two passes through a total of three stages covering 112km. As in Finland, Finnish driver Emil Lindholm and his co-driver Reeta Hämäläinen took the lead in the WRC3 right from the start and held their first place throughout the first day of the event. This duo was then followed by three other ŠKODA crews, who battled for 2nd to 4th place throughout the second day, during which the participants covered further 117 km. Unfortunately, the second day was the last for the newcomer Dominik Stříteský. "I want to thank the whole team. After my accident, the mechanics managed to fix the car very quickly, but on Saturday evening I still had a bit of a headache, so we agreed on a further proceeding with the doctor and the team that we would rather not continue," said the young Czech talent.

Unfortunately, luck was not on the side of the Marco Bulacia/Marcelo Der Ohannesian crew, who crashed in the last stage. On the other hand, Emil Lindholm/Reeta Hämäläinen enjoyed yet another success, and not even the last 50 sharp kilometres had prevented them from repeating their great result from the Finnish rally. They won the start-finish category and proved that they can be fast not only on gravel but also on asphalt. However, a thrilling battle was fought between the crews Kajetan Kajetanowicz/Maciej Szczepaniak and Pepe López/Borja Odriozola, who were in a tug-of-war for the second place until the last day. On Sunday, however, a technical problem with the car of the latter crew came into play and Kajetan Kajetanowicz went on to take the second place in his category, which put him in the overall lead in the WRC3 standings. The other ŠKODA FABIA Rally2 and Rally2 evo cars took seven places in the top 10 in this category.

The WRC2 category result was also crucial, despite the absence of the Toksport WRT crews. Norwegian driver Mads Østberg finished fourth in Spain, helping Andreas Mikkelsen to the WRC2 championship title for 2021*, despite Andreas only watching the action from the service area this time. "It's rather unusual to win the WRC2 Drivers' Championship when you're just sitting in the service area. Still, it's an incredible feeling to become the champion in such a strong competition. The season has been perfect, my ŠKODA FABIA Rally2 evo has been reliable throughout," commented Mikkelsen.

You can enjoy the winning atmosphere from the Spanish tarmac in the following photos. We have also prepared some of them to be used as wallpapers for your mobile phone.

* subject to confirmation by the FIA