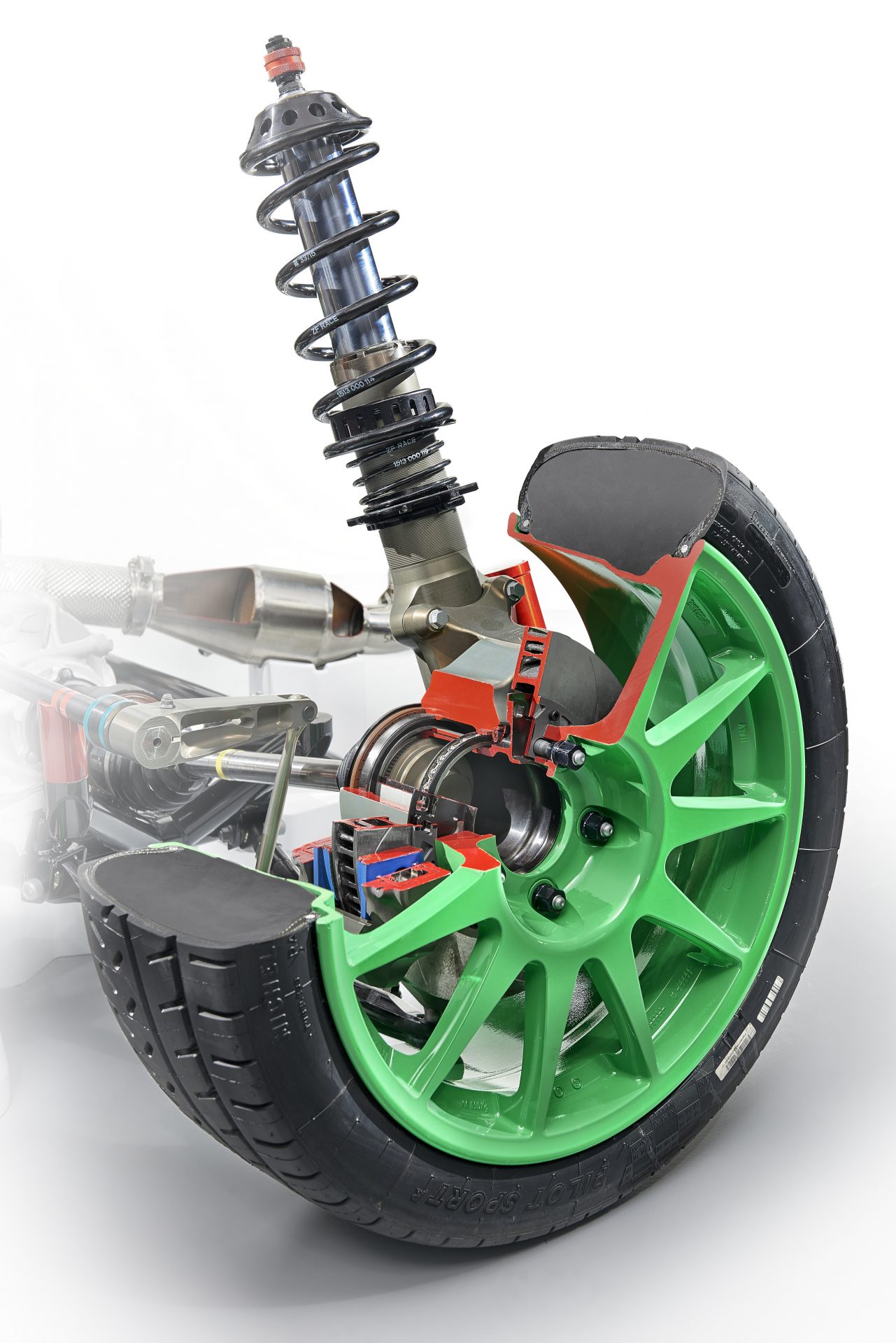 Brakes: When There’s Need to Shed the Speed | Rally Mechanical

This may sound, in today’s world of CAD modelling and 3D prototype printing, like something from the Middle Ages, but less than half a century ago any new technology was first tested in the real world. If the device seemed sound enough on a theoretical level, someone with more guts than brains would then take a risk and give it a try. The first motorists were considered fools by the “experts” of the day, as the general opinion was that the human body couldn’t survive at speeds of higher than 70 km/h or so. Still, these daring men did try it, and they considered a friction belt or a rubber block to be a perfectly reasonable way to stop a racing car – or else they left the brakes out altogether. It was probably then that the saying “Who brakes, doesn’t win” was born.

The complex problem of stopping the car appeared right after the first problem – how to get it moving – was solved. On a theoretical level, everything was plain and simple. All you needed to do was to exert enough force to stop the vehicle, using the friction of the brake segment against a rotating part fixed to the wheel. As the potential speed of travel increased, however, it became obvious that available braking technologies were basically a short cut to an early grave; the first cars relied on “proven” solutions from horse-drawn carriages, such as rubbing a wooden or rubber block against the iron rim of the wheel.

These methods of slowing down were very simple to engineer, but their efficiency was equivalent to their sophistication. After Mr. Dunlop invented the rubber tyre, it became obvious that these solutions had no future. Rubbing a piece of hard rubber against the tyre was more effective, but the tyres did not generally respond well to such treatment.

The first truly functional system, and one that’s still used today, was the drum brake, invented in 1900. These were first introduced by the German Maybach automobile factory, but their real beginning came in 1902, when Louis Renault brought his own invention to the patent office. Slightly different from the German system, Monsieur Renault’s drum brake was more like the one we still use. It was fully mechanical, and the system of levers and springs inside the drum was cable-actuated, but it used asbestos lining. Today, this is prohibited, but back then it was considered ideal because it was durable and able to effectively dissipate the heat created by friction.

The engineering principle of the drum brake has remained basically unchanged. The massive, rotating drum is fixed to the wheel hub and the braking effect is provided by static, rounded segments with brake linings that spread as the brake pedal is depressed. This exerts friction on the drum’s inner surface. The advantage of the drum brake is its relative mechanical simplicity –  including easy implementation of the parking brake – as well as its resistance against any build-up of dirt and debris. In those times, when most of the roads were gravel, it was the alpha and omega of efficient braking. That’s also the reason why drum brakes live on until today in some applications.

You find drum brakes in cheaper, smaller cars, where lowering production costs makes a big difference. They are only used for the lightly loaded rear axle, except in the very cheapest cars, like the Tata Nano, which uses drums even on the front axle. You can also find them in some off-road vehicles and ATVs. Here, their advantages include smaller dimensions in comparison with disc brakes – the drum brake has a significantly larger friction area than the brake pads of disc brakes, so it provides the same braking effect with a smaller diameter. That’s the reason why wide drums with relatively small diameters are still used on heavy vehicles such as trucks.

Years of development produced the first liquid operated drum brakes in the 1930s, followed by self-adjusting brake shoes in the 1950s. These compensated for the loss of material on the friction surfaces and solved the problem of having to constantly adjust the system as the lining was ground away. There was still, however, one problem to solve. Drum brakes are hard to cool. The heat created by friction during intense use leads to a decrease of the braking effect (so-called “brake fade”), and in extreme cases, even to brake failure. It also causes faster wear.

As cars got ever faster and heavier, it became obvious that it was necessary to find a new kind of brakes, ones that could cope with the heat better. The new solution, as often happens in the automotive industry, came from motorsport. In 1953, Jaguar proved the saying “who brakes, never wins” to be untrue. The British racing team taught its competitors not only that who brakes, wins, but that the one who brakes most effectively, wins more. On 13thJuly 1953, three works prototype C-types fitted with 3.4-litre engines, entered the 24h LeMans – and a day later, they finished in 1st, 2ndand 4thplaces. The only car that managed to defy their dominance was a Cunningham C5-R with a 5.5-litre V8 engine. This car could reach 249 km/h on straights compared to the 244 km/h of the less powerful Jaguars – and that was only enough for 3rdplace. How could that happen? The Jaguars were equipped with a new invention, the Dunlop disc brakes.

The design of the disc brake gives it several advantages over the drum brake. The disc, which rotates together with the wheel, is braked by the pads which are housed in a fixed or floating calliper. The hydraulic pressure of the brake system is applied through pistons – usually one, but in the case of high performance vehicles, more. The craziest racing callipers have as many as sixteen pistons. The discs are, on almost all production vehicles, made of grey alloy with small amounts of other materials added. The pads are more variable, but generally, they are fitted with a layer of highly heat-resistant composite material which has a high coefficient of friction.

There are usually two pads per wheel, one on each side of the disc. There can be more, though, up to six in the case of racing cars. The discs are naturally exposed to the airflow, which cools them more efficiently than the enclosed drums, and helps to shed water from their surfaces. The discs, together with their callipers and pistons, are heavy and can be susceptible to dirt getting inside, but their efficiency is such that they have dominated the industry since the mid-50s, and continue to do so.

It’s a matter of dispute as to which manufacturer was the first to use disc brakes on a production car. The first experiments with disc brakes began in 19thcentury England, where the principle was patented in 1902 by F. W. Lachester. The brakes used on Lachester cars were quite similar to the ones we used today, but at the time, there was no better alternative for the brake lining than copper. That wore out extremely quickly, making the whole system very impractical.

Disc brakes made by Girling were used on Daimler Armoured Car in 1939 and, during World War II, the brake disc made its way to many areas. For example, in Germany, both Arado airplanes and Tiger heavy tanks were fitted with Argus disc brakes. A small American car company called Crosley offered disc brakes for half a year in 1950, before discontinuing them as unreliable. Chrysler offered “disc brakes” between 1949 and 1953. Those, however, used a different design than the system that later became common. Another contender for the title  of “first” is the 1955 Austin-Healey 100 S (though that was a low-production racing model) and the Jensen 541. In 1955, the Triumph TR3 was fitted with four-wheel disc brakes – but that was in fact a prototype. Before 1956, Triumph tested three TR3 units to find which braking system was the best – one had drums, another had Girling discs in the front and drums in the rear, and the third was fitted with Dunlop discs front and back.

The Citroën DS probably has the strongest claim to being first. It was fitted with disc brakes when it premiered at the Paris Auto Show in 1955. Although just 70 examples, basically pre-production units, were built in 1955, Citroën used an innovative solution from the very beginning. The heavy brake discs were moved to the middle of the axle, right next to the differential, to lower the unsprung mass. This solution was later repeated in both in motorsport and production cars – the last such car was the Alfa Romeo 75. The disadvantage of this approach is that it makes service access very complicated, as well as making cooling more difficult. In the end, wheel-mounted disc brakes became standard and are used to this day, and their engineering, although principally unchanged, has developed further.

Cooling is of the utmost importance for braking efficiency and various ways to improve it have appeared over time. The most common are internally ventilated discs, with cooling canals between the two friction surfaces. Such brakes are now standard on the front axles of most production cars (smaller, solid discs are used in the rear ,or in the case of lighter cars, drums). For high-performance sports- or race-cars, drilled or slotted discs are often used. Contrary to popular opinion, the holes or slots are not used for cooling, although they do help with this, but for the release of gases.

During intensive braking, the material of both pads and discs heats up and starts to evaporate. This creates a thin layer of gas between the pad and the disc, preventing contact and causing the brakes to fade. A similar situation occurs during intensive use in the rain, when effectiveness can be limited by a layer of overheated steam.

The disadvantages of slotted or drilled discs are a tendency to crack and much faster wearing on the pads. The latter is a disadvantage for street use; for racing use, it’s perfect, as it removes layers of burned materials and ensures a stable performance.

The ŠKODA FABIA R5 uses discs from the renowned brand Brembo on all four wheels. Depending on the type of the track, they are 300 mm all around (gravel) or 355 mm in the front and 300 mm in the rear (tarmac). Specific discs and brakes are designed for individual setups, along with shocks settings, tyres, stiffness of the sway bars, ride height etc.

Even though disc brakes have been in use for more than 60 years, tuning them together with other components of the racing car for the best possible performance is still work for highly experienced experts.

Because he who brakes most effectively, wins!