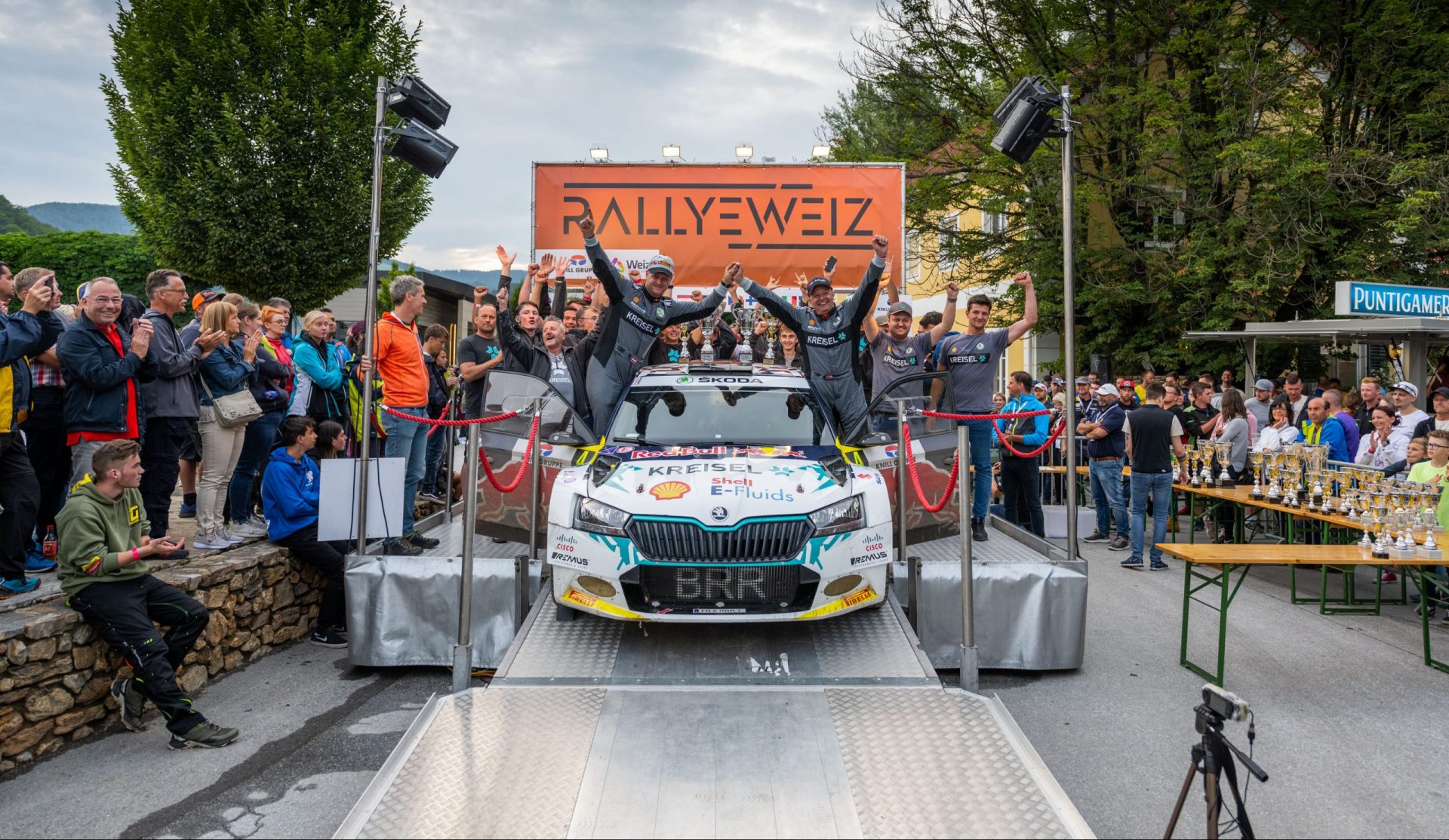 In mid-July, the world of motorsport passed a major milestone. For the first time in the history of rallying, the fully electric ŠKODA RE-X1 rally car completed the full length of a rally without any relief. In the successful debut at Rallye Weiz, the car succeeded speed-wise and finished third in the overall rally standings.

The ŠKODA RE-X1 Kreisel is an experimental prototype built in collaboration between the ŠKODA Motorsport team and the battery technology specialist Kreisel Electric. It is based on the successful ŠKODA FABIA Rally2 evo rally special.

The engineers of the Mladá Boleslav sports team, together with Kreisel's developers, modified the body floor to integrate a 52.5 kWh electric drive battery. For these reasons, the safety frame, which had to be homologated, and the interior of the car also required ceretain modifications. The main change inside the car is a different steering wheel with a number of controls and the absence of a sequential gear lever. This has been replaced by paddles placed under the steering wheel used to select the level of recuperation. 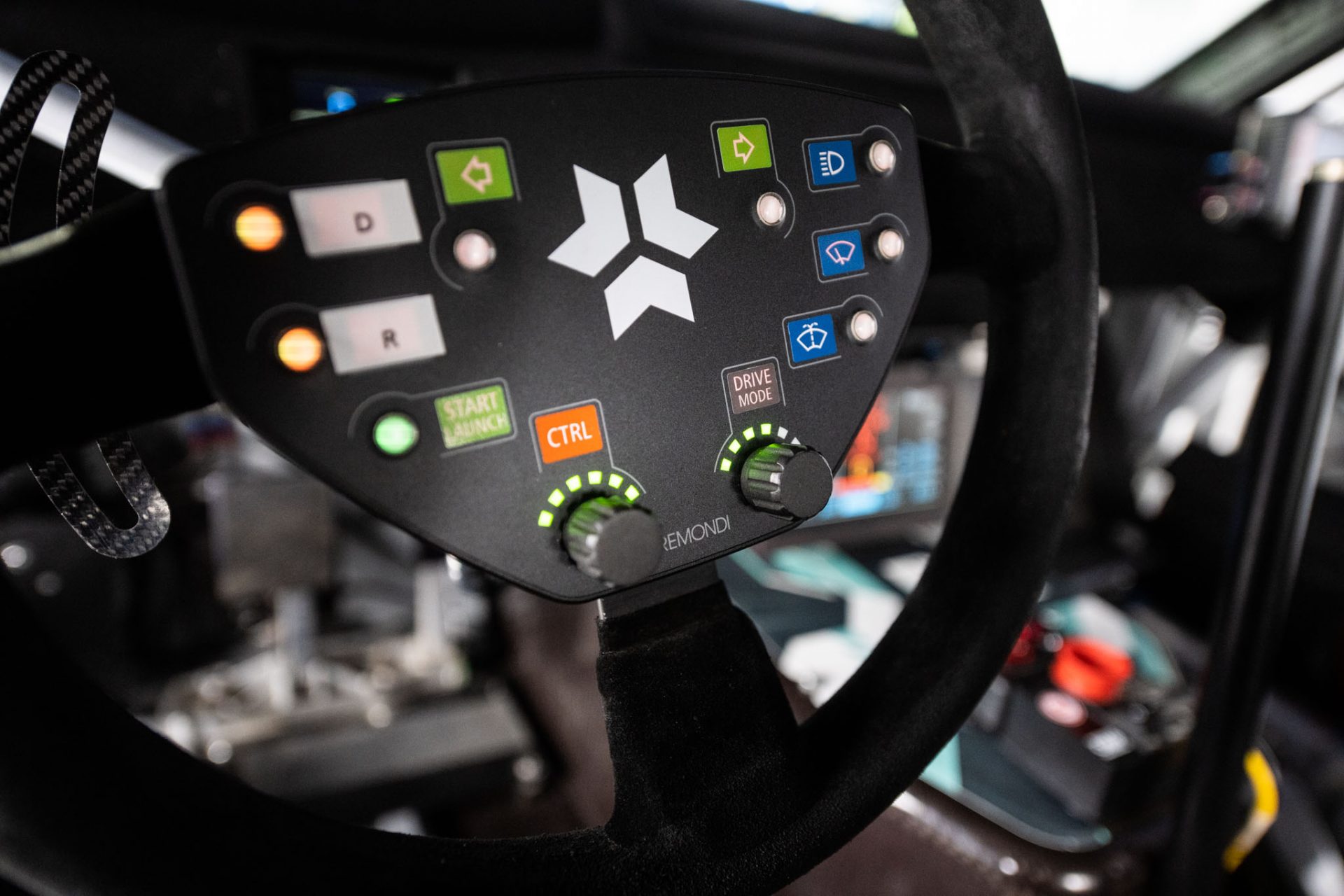 Necessary setting changes
"The ŠKODA RE-X1 works with two electric motors. One is located on the front axle and the other on the rear axle without a mechanical connection. The biggest challenge in development was to get the two axles to work together so that the whole car functions like a true Rally2 class rally special. For the purposes of a correct drive control special software based on a detailed survey of drivers ‘requirements has been developed. It was clear from the attractive cornering that we did this quite well," says Daniel Foissner of Kreisel Electric.

Although the ŠKODA RE-X1 Kreisel has the same dampers, wheel hubs, suspension and brakes as the ŠKODA FABIA Rally2 evo, these components had to be re-adjusted due to the higher weight. The experienced BRR Baumslager Rallye & Racing team, led by seasoned racer Raimund Baumslager, whose experience in rally car racing goes back to the 1980s, helped with the final chassis tuning.

"We specialize in the electric drive of the ŠKODA RE-X1 Kreisel. We are very happy to have partnered with BRR Baumslager Rallye & Racing, otherwise we wouldn't be here today. Their many years of competition experience allow us to put the car into competition with the right chassis set-up, on the right tyres and with the right service facilities. In addition to the excellent support from ŠKODA Motorsport and indeed ŠKODA AUTO as a whole, this is another key partner for our electric rally car project," said Foissner.

Competitive speed
After six special stages on Friday, the ŠKODA RE-X1 Kreisel of Raimund Baumslager/Jürgen Heigl was in fifth place in the standings. "For a car that we drove for the first time in February, this is very good. I have to change my driving style a little bit, because there is no clutch or gearbox, so it's completely different to judge the speed on the corner entries. The big unusual thing is also the higher weight. The car is about 140 kilograms heavier than the classic FABIA Rally2 evo, so when braking you feel the weight pushing you forward all the time with its inertia. The higher weight also makes a difference during quick changes of direction, when the electric car takes its time. Otherwise, however, the RE-X1's steering is becoming more and more like that of a petrol Rally2," Raimund Baumslager summed up his feelings about driving the ŠKODA RE-X1 Kreisel.

It started to rain heavily on Saturday morning in the vicinity of Weiz, so most of the timed tests of the second stage took place on wet asphalt, which played into the hands of the experienced Austrians. They moved up to third place on the first stage on Saturday. In the lunchtime service, Baumslager's smile showed that he was feeling good in the car. "I seem to be quite good in the wet with the ŠKODA RE-X1 Kreisel. I made a great tyre choice and we gradually increased our pace. Everything is working great, now it's just a matter of getting the car to the finish without any damage," said the multiple Austrian rally champion on Saturday morning. However, apart from the flawless performance of the crew, the key to successfully completing the race was to ensure that the car's batteries had enough power.

Sufficient amount of energy throughout the race
In agreement with the organizers, specially designed mobile charging stations called CHIMERO were located at carefully selected crossings between the stages. The Kreisel Electric team designed it to be mobile and easy to operate, while providing a high charging capacity of up to 200 kW. CHIMERO can fully recharge the ŠKODA RE-X1 Kreisel in 15 minutes, which does not compromise the race schedule in any way and does not risk any time penalties before the start of the next timed insert. A fully charged ŠKODA RE-X1 Kreisel can travel up to 35 kilometres at full race pace. During the Rallye Weiz, it was proven that this purely electrically powered prototype can complete the full length of the race with the Rally2 specials without any problems at all with continuous charging. 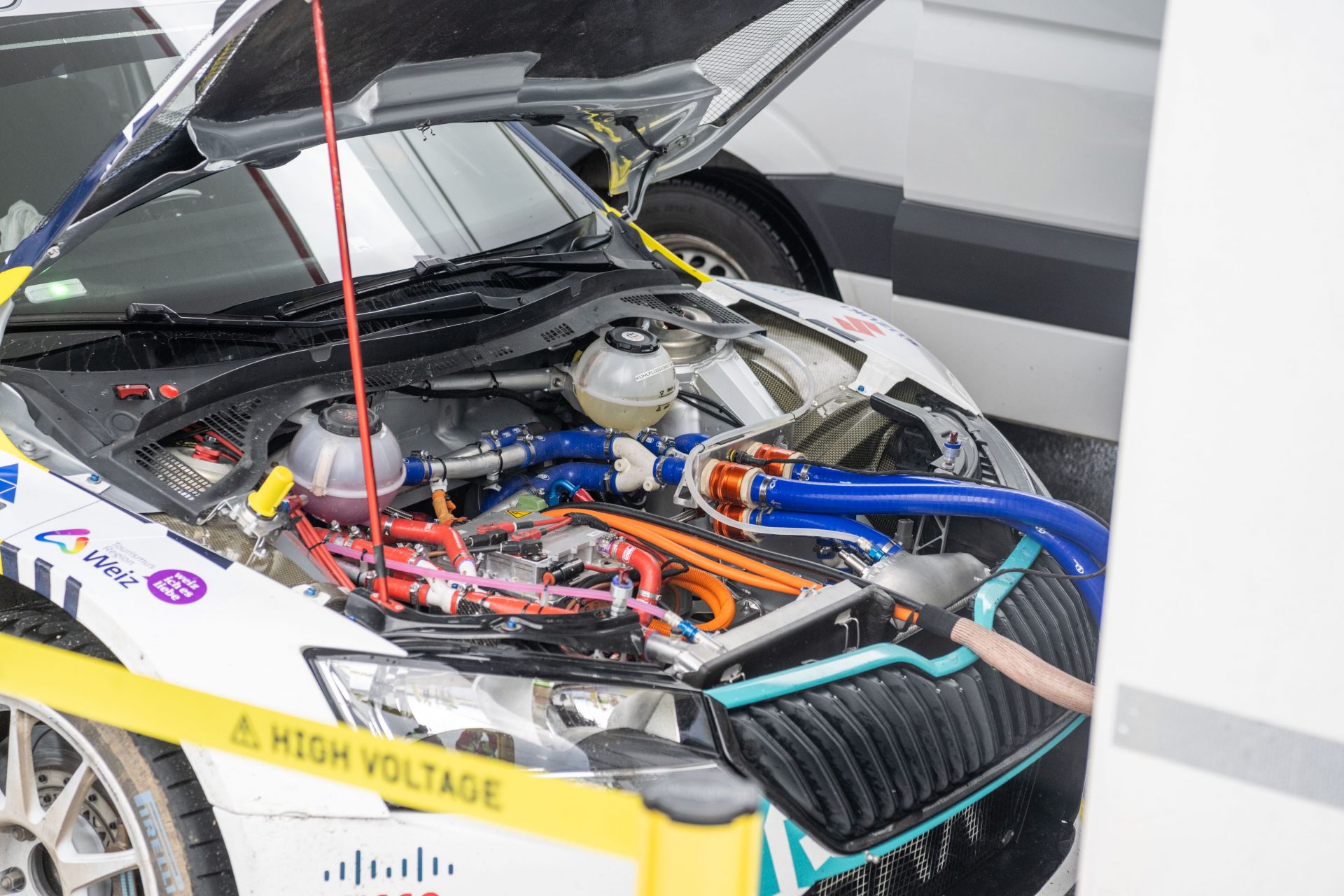 A special feature of the battery, and the key to repeatedly delivering high performance, is the special cooling system. Looking under the car's front bonnet, two cooling circuits can be seen. The one with red hoses cools the engines and transmission, the one with blue hoses the battery. The circuit uses a special intact fluid developed by Shell that does not carry any electrical charge. The uniqueness of the battery cooling is that each single cylinder cell is wrapped by a tube of the cooling system and is therefore cooled separately and over its entire surface. In addition, quick couplers are located in the engine compartment and the cooling circuit can also be connected to an external unit that maintains a stable battery temperature and speeds up the charging process when charging with DC current and high power (up to 200 kW). Conversely, in cold conditions, such as those experienced during the Arctic Rally in Finland this year, the battery can be kept warm in this way to prevent it losing capacity due to the cold. Interestingly, for both cooling circuits, radiators the size of the standard competition FABIA Rally2 evo are sufficient.

Joy at the finish
The Baumslager/Heigl crew maintained their lead throughout the afternoon and finished in 3rd place in the middle of the Rally2 class group. Foissner was not hiding his excitement at the finish. "Third place is a great result for us. It was the world premiere of an electrically powered competition car that completed the full length of the race compared to the competition in similar rally cars with combustion engines. We didn't go the route that Formula E, for example, has taken, but we wanted to show the speed that fans are used to on the test tracks. Thanks to all our partners who have made this possible. We've got a lot of data for further development and we can't wait for the next race. ”

The ŠKODA RE-X1 Kreisel has confirmed that the experience of the ŠKODA Motorsport team in developing top competition cars, the innovative thinking of KREISEL Electric and the championship background of BRR Baumslager Rallye & Racing point to one possible future for rallying. 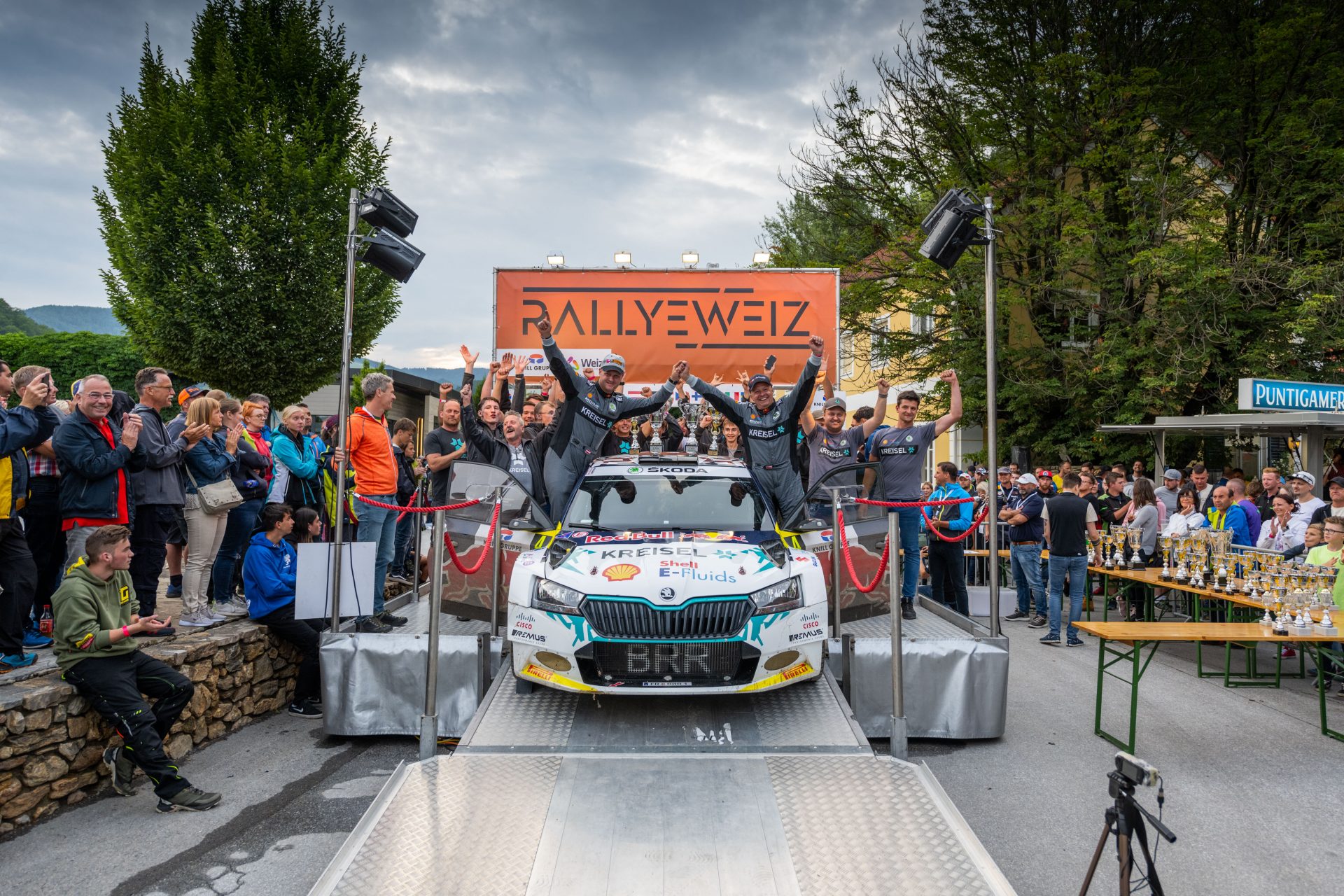