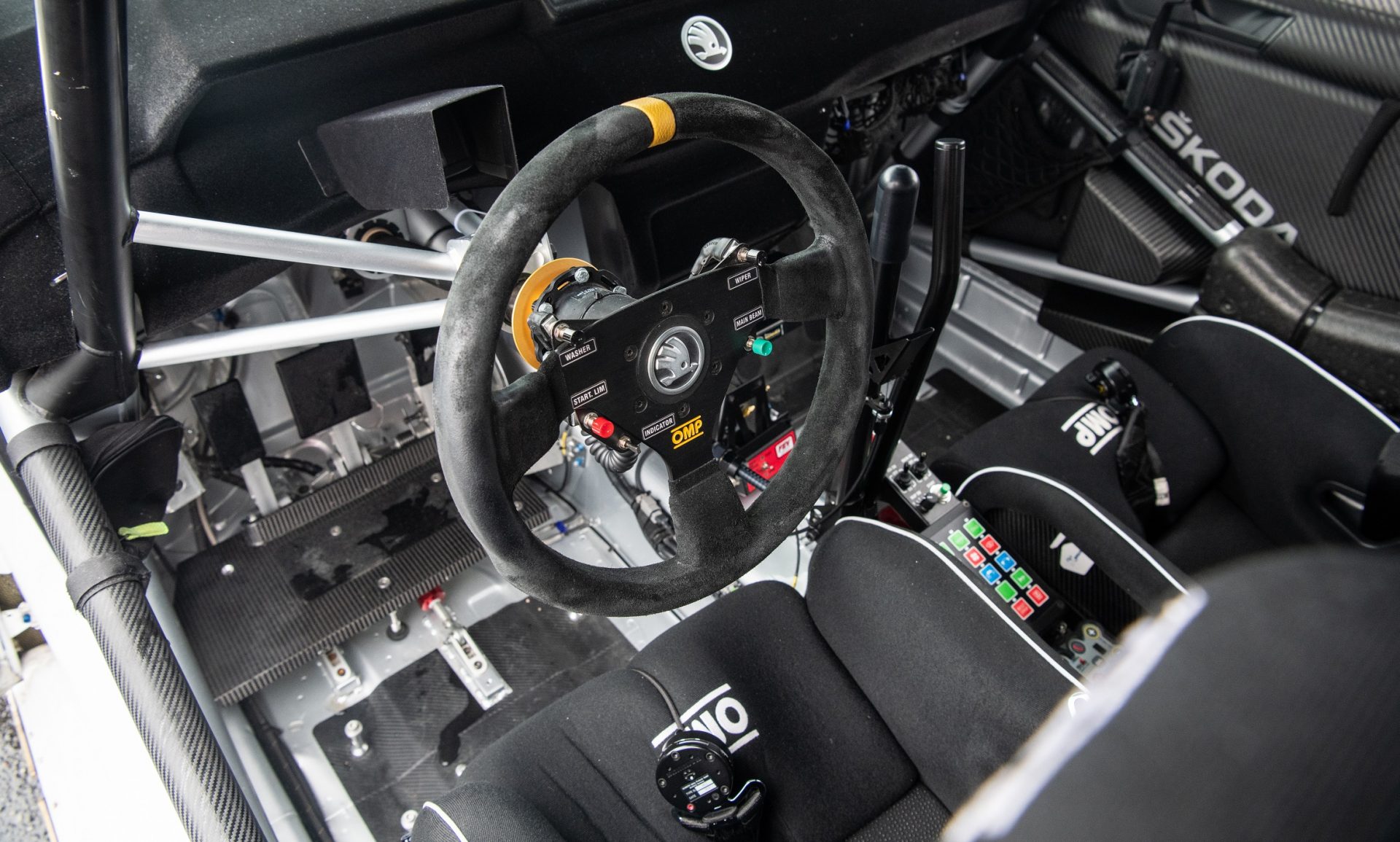 Guardian Angels. How the ŠKODA FABIA R5 Protects Its Crew

Besides the 4×4 drivetrain and powerful turbocharged engine, there is one more crucial thing that sets the ŠKODA FABIA R5 apart from the production model: the safety equipment. You won’t find six airbags or Front Assist in the rally car, but it offers an array of interesting safety features that serve to protect its crew on the tracks of rally stages. The construction of a rally car is governed by the stringent rules of the FIA (International Automobile Federation), which are based on decades of experience with driver safety. Let’s take a look at the ways that the ŠKODA FABIA R5 protects its crew.

The roll cage is the protective tubular frame inside the rally car. It plays a crucial role in the crew’s protection, which is why the FIA dictates its construction down to the tiniest of details in Appendix J – article 253 of the technical regulations for rally cars. The roll cage has to be made from seamless, cold-drawn unalloyed carbon steel with limited carbon and manganese content. The tubes have to be bent by a cold working process with the minimum possible change of diameter, to prevent changes to the tube’s rigidity in the bend. There are also tight rules for the quality and finish of the welds.

The properly formed and welded roll cage with diagonal members in the roof, in the front doors and in the boot, is attached to the bodyshell in several places, turning it into a fixed part of the car’s structure. Besides providing protection to the crew, it also serves to significantly increase the car’s torsion stiffness. It’s only a slight exaggeration to say that if the axles and engine were bolted to the roll cage, the body shell itself wouldn’t even be necessary. That, by the way, is how the famous Group B rallycars were built – all the components were mounted to the spaceframe, with the fiberglass or Kevlar body serving only to cover the innards. The roll cages of modern rallycars are designed so that in case of an accident or any kind of impact, the space for the crew stays intact.

If the spaceframe is damaged, the FIA marshals have to carefully assess whether there was any structural damage. If that is the case, the car is not allowed to continue, due to the possibility of compromising the crew’s safety. In other words, the properly stiff, intact frame is the alpha and omega of the rallycar.

The seats of the driver and co-driver also receive a lot of attention. For cars in the R5 category, the FIA requires using seats conforming to the FIA 8862-2009 standard – a 39-page regulation which describes all the specifications of racing seats. It’s not just their mounting inside the vehicle, but also the precise shapes, the lifespan of individual parts or the ability of the materials to withstand fire.

The main difference between racing seats and “civilian” ones is the fixed driving position, as the shell of the seat is made in one piece. There is also the massive side bolstering, which keeps the bodies of the driver and co-driver from moving around sideways. The bolsters have to be at least 150 mm at the seat’s cushion, 195 mm at shoulder height and at the top point, where they support the driver’s helmet, 230 mm. Also included are certified six-point racing harnesses. They’re not very comfortable, but that’s not important in a rallycar. The most important thing is to keep the driver fixed inside the seat, because that helps him to better feel the movement of the car and the grip of the tyres.

Another interesting aspect is the price of the racing seats. Even though they’re not heated, not ventilated and have no massage functions, they can cost around 4,000 EUR each.

Deformation materials in the cockpit

In the case of a side impact, the ŠKODA FABIA R5 protects the crew with special energy-absorbing foam. Once again, the FIA prescribes exact material properties, including the list of approved manufacturers, which includes one Czech company. The whole space inside the door is filled with this foam, as is the space between the seat and the side sections of the roll cage.

A piece of foam is also used to fill the space between the B-pillar and the upper part of the seat, which provides the support for the helmet. It’s just a 10 cm thick piece, but in the case of impact, it is able to absorb a lot of energy and efficiently reduce the force inflicted on the driver’s head. In motorsport, every centimetre matters and when it comes to crew’s protection, it matters even more.