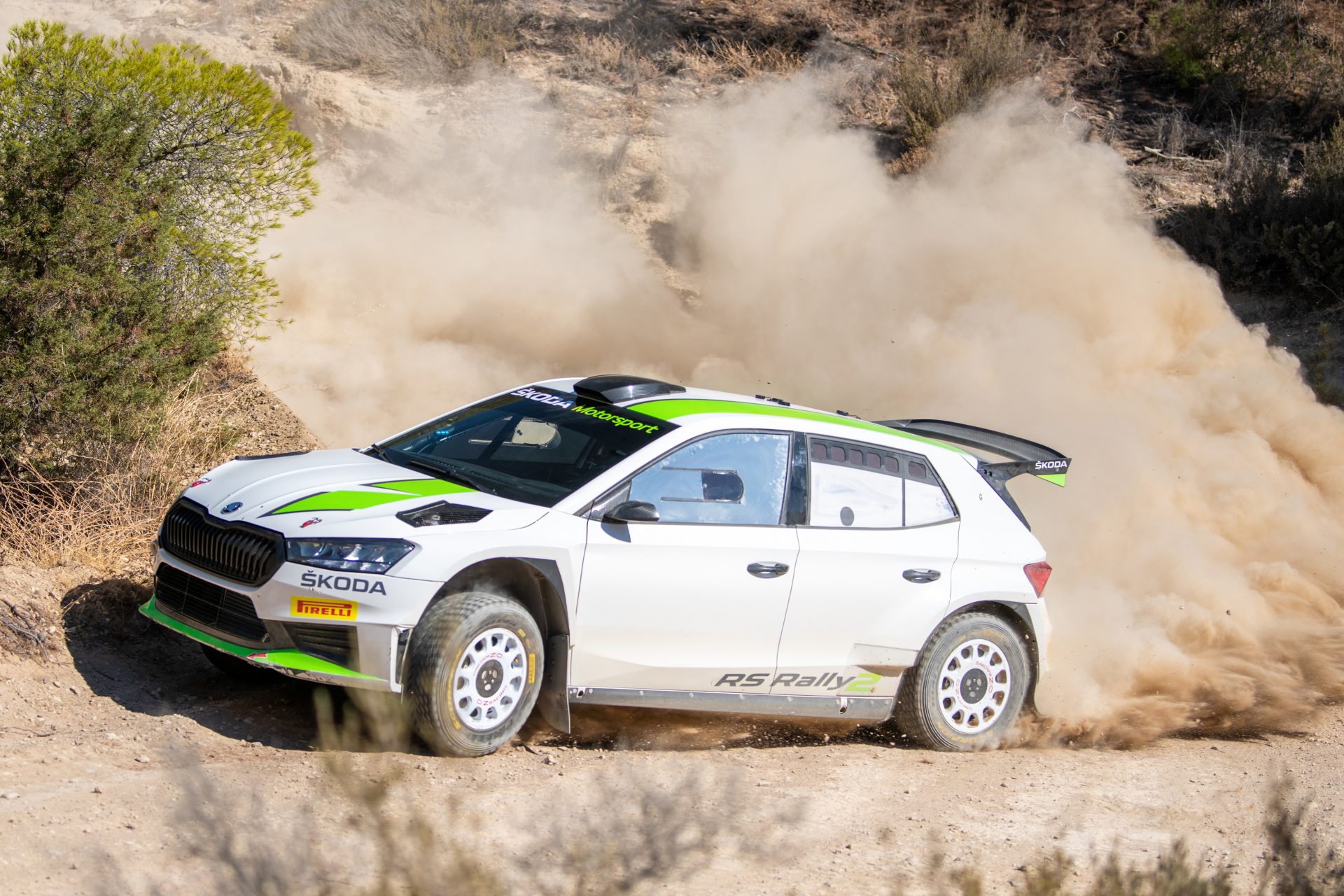 Mladá Boleslav, 25 November 2022 – Since the ŠKODA FABIA RS Rally2 has passed homologation, the technicians of ŠKODA Motorsport concentrate on adapting the all-new Rally2 car even more to the needs of the customer teams from around the world. Some of them have to face extremely rough gravel rallies in their national championships. The focus of the latest four-day test with the ŠKODA FABIA RS Rally2 in Greece was on finding a setup as durable and versatile as possible for these specific conditions.

Since 2015, ŠKODA Motorsport has sold more than 470 units of the SKODA FABIA Rally2 and the SKODA FABIA Rally2 evo to customer teams worldwide. During a season, they are facing rallies on tarmac from circuit-like flat to heavily broken and bumpy, on gravel from smooth to rocky, on snow and on ice. The target for ŠKODA Motorsport is always to provide a car, which can handle these different conditions perfectly. With the all-new ŠKODA FABIA RS Rally2 now homologated by the FIA, the focus of the technicians from Mladá Boleslav has shifted even more to the needs of the customer teams around the globe.

“Our task is to keep pushing to always have the best package for our customers,” emphasizes Chief Engineer Eric Mommey. In the quest to find the best setup solutions for rough gravel events, Mommey and his team travelled to Greece. The gravel tracks of the country are notoriously for being real car breakers. “The combination of challenging surfaces and high temperatures are extremely demanding for a rally car. In Greece you need a durable and reliable car more than anywhere else,“ explains Mommey. In other words: the perfect environment to prepare the ŠKODA FABIA RS Rally2 for whatever gravel rally the customer teams might encounter.

Briton Kris Meeke, winner of five world championship rounds, and Emil Lindholm from Finland, newly crowned champion of the WRC2 Junior class, took over driving duties for two days each. They put the ŠKODA FABIA RS Rally2 through its paces on gravel tracks in the Loutraki and Corinthia region, both similar to the Acropolis Rally, the Greek round of the FIA World Rally Championship.

Not surprisingly, local ŠKODA Motorsport customer team representatives and drivers took the opportunity to have a closer look at the new rally car from Mladá Boleslav. Lavrentios Meletopoulos was one of them. “The tests ŠKODA Motorsport is running in our country are very important for Greek customers. They make sure, that we can buy a car, that performs properly,” he says. “What I saw of the new ŠKODA FABIA RS Rally2 on the stages here looked extremely promising. Every car, that is tested on Greek roads, ends up as a winner. I am convinced, that the ŠKODA FABIA RS Rally2 as well will be a class of its own.“

How will the recent test in Greece help ŠKODA Motorsport customer teams?
The Greek gravel stages are notorious for being extremely demanding for every rally car. The high temperatures during summer are critical for the cooling of the engine, of the transmission and also of the cockpit. Due to the relatively slow speeds, most of the time averaging around 80 kph, it’s essential to create the perfect air flow to cool down all systems. And finally, the rough surface asks for a very reliable and strong car. With development tests like the recent one in Greece we make sure, that the ŠKODA FABIA RS Rally2 survives even the toughest conditions.

What’s the trick to find the perfect setup right?
In general, setting up a rally car is always about finding the best compromise. For example on rough gravel stages like in Greece, we need to find the perfect balance between speed, reliability, a good suspension package for the rough parts and the correct differential settings for low speed to limit the tyre wear. The ŠKODA FABIA Rally2 and the ŠKODA FABIA Rally2 evo won many gravel rallies. Thanks to the experience and data we collected with these two models since 2015, the new ŠKODA FABIA RS Rally2 also is a very strong car.

What makes ŠKODA Motorsport's customer program so specific?
We try to be very close to all our customers. This counts not only for selected rallies, where we support our customers directly with a spare parts service and technical support. We also have an excellent sales team, which is available sometimes even 24/7. So far, we have already sold more than 470 ŠKODA FABIA Rally2 and ŠKODA FABIA Rally2 evo worldwide. Our customer base is very big, this brings a big responsibility for us. It is our goal to provide optimal support to every customer.

How has the technical and engineering support team grown over the years?
ŠKODA Motorsport’s support team grows with the number of customer cars on the market. On average, each given weekend around 100 private ŠKODA FABIA in Rally2 specification compete. Our engineers and technicians do their best to help them reach the finish and bring their crews to the podium.

Which improvements of the whole package arrived with the new ŠKODA FABIA RS Rally2?
We improved our spare parts catalogue even more. Exchange of technical information with teams will be easier as well. We continue to send our spare parts truck to selected rounds of the world and European championship. During the development of the new car, we implemented feedback and experience of our customers wherever possible. The ŠKODA FABIA RS Rally2 is meant to be even more customer friendly than its predecessors – not only for drivers and co-drivers, but for mechanics, engineers and all team members as well.