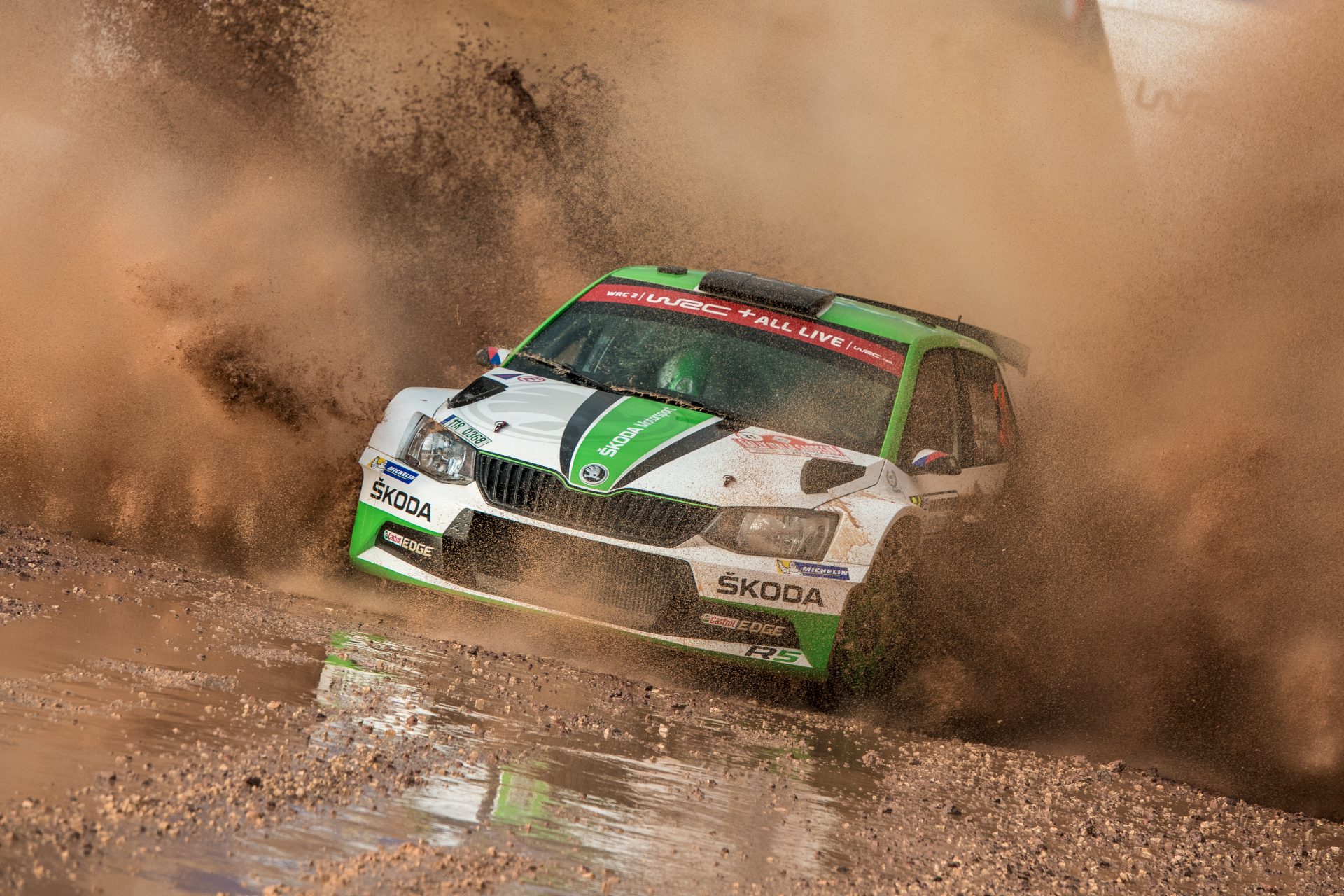 This article provides up-to-date information about the action in Sardinia: the latest results from the Special Stages, news from the team and anything else that may interest you. Keep watching us!

The Rally Italia Sardegna is behind us with a great success, but you can re-live the best moments of the weekend in our short recap video. Enjoy!

Jan Kopecký and Pavel Dresler in the leading FABIA R5 focused on bringing the car (and the victory) home safely – in Kopecký’s own words “almost driving around every stone on the track” – while Ole Christian Veiby and co-driver Stig Rune Skjaermœn were in maximum attack mode, trying to recover from their mishap from Friday.

Starting the day in third place, they had four stages and 42 kilometres in which to close the 28.2 second gap between them and second place. They launched hard, right from the beginning, beating Nicolas Ciamin’s Hyundai i20 R5 by a stunning 12 seconds in the first stage of the day and closing the gap to 16.2 seconds. On the 6.96 kilometres long 18th stage, they were 11.6 faster than their rivals, reducing the gap to 4.6 seconds. One stage later, Veiby finally managed to grab second place and hang on to it until the finish in Alghero. With this amazing result, he moves into third place in the interim WRC 2 championship standings.

ŠKODA Motorsport boss Michal Hrabánek summed up: ““Fantastic performances from Jan and O.C. alike – they’ve made me really proud and happy! Now that we’ve won six out of seven rounds of the 2018 WRC2 category we’re in a strong position to defend our titles. Pontus and Jan have the same number of races from now until the end of the season, so they’ve got an equal shot at the drivers’ championship – may the best driver win!”

After a rainy Thursday and Friday, the sun returned to Sardinia on Saturday morning, just in time for the longest leg of the Rally Italia Sardegna: seven special stages covering more than 146 kilometres. Thanks to heavy rainfalls on the previous days, some stages were still muddy and slippery. After SS10, which is around 15 kilometres in length, two classic stages were waiting for the crews – the Monti di Ala and the famous Monte Lerno, the longest stage of the rally at 28.89 kilometres.

The ŠKODA works crews started Saturday with different missions. Second placed Jan Kopecký and Pavel Dresler aimed to put the leading Citroën driver Lefebvre under pressure, while their young teammates Ole Christian “O.C.” Veiby and Stig Rune Skjaermœn needed to recover from their mishap on Friday. Leading in the WRC 2 category after five stages, they had been delayed by a suspension issue and had dropped down to eighth position. Both ŠKODA works crews had encouraging starts. While Kopecký was second quickest and cut his main rival Lefebvre’s lead down to 12.2 seconds, Veiby set the first fastest time of the Saturday morning. On the next stage Lefebvre damaged his suspension and the Czech champion moved into the lead. O.C. Veiby set another fastest time, continuing to climb the leaderboard.

By the midday service halt in the harbour of Alghero, O.C. Veiby was closing in on the drivers ahead of him and Jan Kopecky was maintaining a convincing lead. With three fastest times in a row from the morning stages, Veiby had moved up to fifth place in the WRC 2 interim category standings and the podium was now in his sights.

The afternoon proved what the morning had hinted at: the ŠKODA Fabia R5 is (with a bit of luck) the fastest car in WRC2 category. No other car won a stage today. Jan Kopecký, current overall leader, won one SS, and Ole Christian Veiby won the remaining 6!

There was no change at the top of the overall standings after the afternoon’s itinerary, with Jan Kopecký and Pavel Dresler sitting comfortably, 3:09.4 ahead Hyundai’s Nicolas Clamin in second place. Veiby, along with his teammate Stig Rune Skærmoen, are racing to the podium party, leaving the others breathing their dust as they move from overall 5th place to 3rd. They are now just 28 seconds behind Clamin in second place, so there’s a lot to look forward to in Sunday’s last four special stages.

The performance of the ŠKODA Fabias outside of the factory team just confirms the dominance of this amazing car during 2018’s Rally Italia Sardegna. Four of these cars are in the top 6, accompanied by two Hyundais (2nd and 4th). The Italian team of Fabio Andolfi and Simone Scattolin currently hold the 5th position while the Polish team Łukasz Pieniążek/Przemysław Mazur are in 6th place.

After a rainy night, the crews woke up to yet more rain, with slippery tracks and mud to contend with in the forest stages. Jan Kopecký and Pavel Dresler took a really cautious approach to the second stage, dropping to eightth position in their class, while their young teammates Ole Christian Veiby and Stig Rune Skjaermœn managed to cling on to third position, just one second behind the leader.

“It’s hard to read the road properly and to know when it’s better to attack or step back. It was raining during a lot of those stages. Under those conditions, you can easily lose control of the car”, admitted Jan Kopecký. His teammate O.C. Veiby added: “The grip level was changing all the time, making it really difficult, but I made it through the stages without any serious incidents.”

The afternoon leg saw a repetition of the morning stages. The loose gravel on the surface was gone and heavy rainfalls had made the tracks even muddier. In some places, rocks had been dragged around by the first passage of nearly one hundred competitors. On his second passage through the notorious “Pula” stage, Jan Kopecký regained his confidence in these difficult conditions and set the fastest time. Teammate O.C. Veiby dropped down from the lead to third position, after he damaged his front right suspension. In order to continue, he had to carry out improvised repairs, including the disconnection of the front right driveshaft. From there onwards, he had only a three-wheel-driven ŠKODA FABIA R5 in which to finish the three remaining stages. Wrestling with the handling of his car, he nevertheless managed to reach the end of the Friday leg in Alghero, finishing in eighth position in the WRC 2 category standings.

ŠKODA Motorsport boss Michal Hrabánek said: “I feel sorry for O.C.; he delivered a strong performance in the morning. Jan is now in a good position to win in the WRC 2 category.” Saturday is the longest leg of the rally, with seven special stages covering more than 146 kilometres. Sunday will decide the final outcome, with four stages close to the coast, north of the host town of Alghero.

The action kicked off on Thursday evening with the first special stage. While short, at just two kilometres, the Ittiri stage is extremely popular with fans – as it is run in the former autocross arena and is a great spectacle to behold. This time, the ŠKODA works crews gave the crowds a really stunning show. Ole Christian Veiby managed to finish in 2:08.2 and reach first position, closely followed by Jan Kopecký at 2:08.9 in second place. The rally is off to a great start for the ŠKODA Motorsport team!

The two factory crews were not the only heroes of this weekend’s action in Sardinia. Local rally fans cheered Fabio Andolfi with co-driver Simone Scattolin who were driving a FABIA R5 prepared by ACI Team Italia. Even though suspension problems caused by rough track surface cost them some valuable time and prevented them from achieving their goal – scoring a podium at home rally – they put on a great performance, just narrowly missing the bronze and ending up in 4th.

Right behind them, the Polish crew of Łukasz Pieniążek with co-driver Przemysław Mazur in another FABIA R5 fielded by Printsport Oy team, were fighting the conditions from the beginning to the end. Even after a mishap with a tree on Friday, they managed to keep in the running and climb back to the 5th place by Sunday.

The last FABIA R5, fielded by local team Motorsport Italia but driven by Benito Guerra jr. from Mexico with co-driver Borja Rozada from Spain, ended up right behind the Poles in the 6th place.

Congratulations to all the crews!