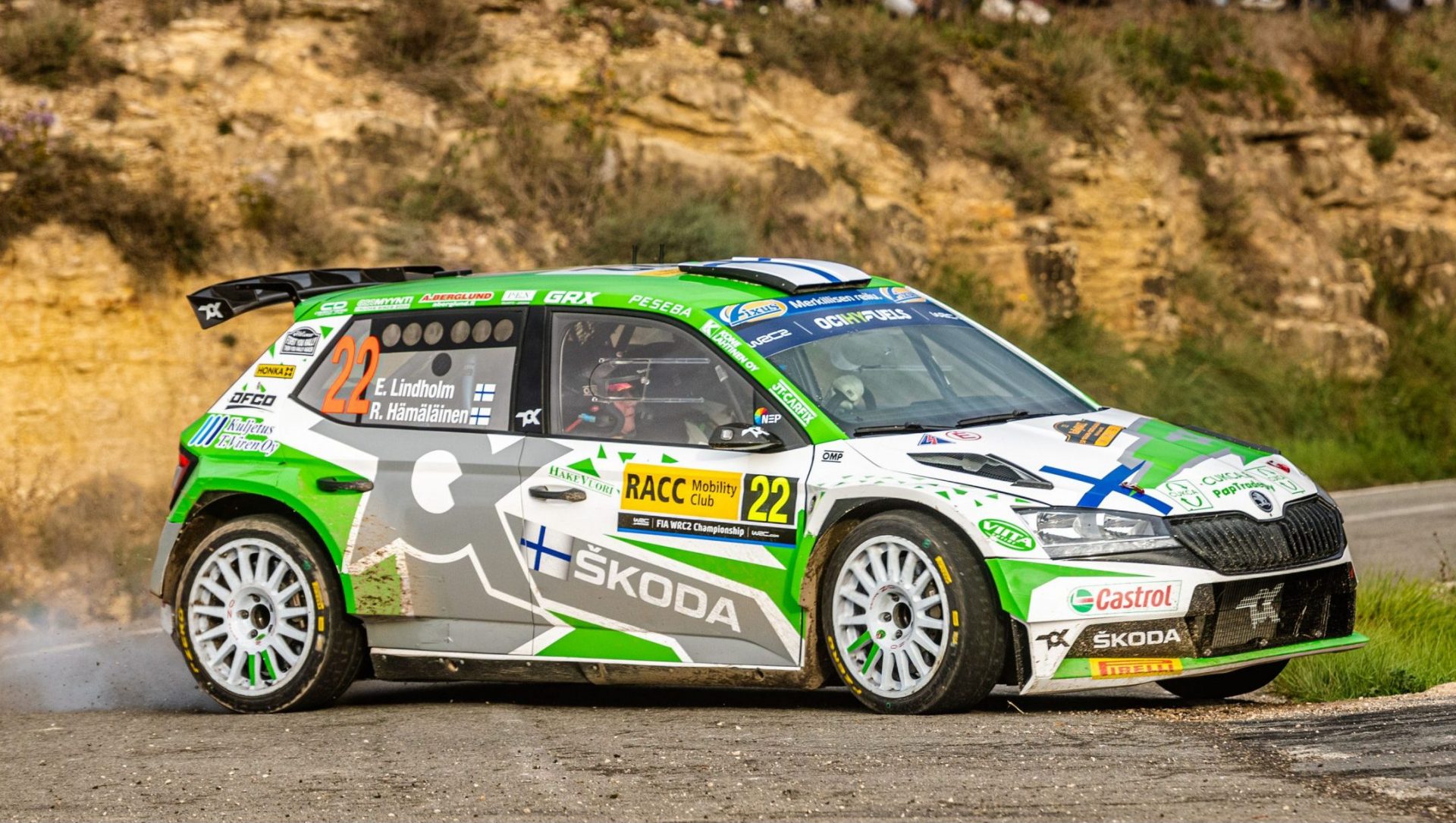 Salou (ESP), 23 October 2022 – RallyRACC Rally de España, the 2022 FIA World Rally Championship’s penultimate round, brought no decision in the fight for the WRC2 Drivers’ title. ŠKODA FABIA Rally2 evo drivers Emil Lindholm from Finland and Kajetan Kajetanowicz from Poland finished fourth and sixth respectively. After having done six rallies each, they are equal on points. Their gap to defending champion and overall leader Andreas Mikkelsen (ŠKODA FABIA Rally2 evo), who was not competing in Catalonia, is down to five points.

After two rounds on gravel, the world championship returned to asphalt. Rally Spain brought the competitors to the hills close to the Mediterranean tourist resort of Salou. Freshly crowned WRC2 Junior champion Emil Lindholm and co-driver Reeta Hämäläinen opened proceedings with a WRC2 fastest time on the first special stage (SS). When the Finns aboard the Toksport WRT run ŠKODA FABIA Rally2 evo lost nearly a minute due to a puncture caused by a spin in the next test, Kajetan Kajetanowicz and co-driver Maciej Szczepaniak moved ahead of their rivals. The situation turned around again, when “Kajto” took one corner a bit too optimistic (SS6). The team ORLEN ŠKODA FABIA Rally2 evo slid off the road, but fortunately could continue with only a couple of seconds lost. But from that point on, Lindholm/Hämäläinen had the upper hand in the intense duel with Kajetanowicz/Szczepaniak.

However, with their time losses from leg 1, both Lindholm and Kajetanowicz had no word in the fight for WRC2 victory. Eventually, they finished fourth and sixth respectively, bringing both to a total of 104 points. Lindholm climbs to second position overall, because he leads Kajetanowicz by 2:1 victories. Defending champion Andreas Mikkelsen still tops the WRC2 Drivers’ classification. But the Norwegian has already the maximum of seven rallies under his belt. Thus, he didn’t compete Rally Spain at the wheel of the Toksport WRT run ŠKODA FABIA Rally2 evo and will also not travel to the season’s finale in Japan. But Kajetanowicz and Lindholm will. For victory and the power stage win, a maximum of 28 points is up for grabs in Japan. Even taking into account, that both still have to drop their worst points score of the season, both Kajetanowicz and Lindholm can mathematically overtake current overall leader Mikkelsen.

The Spanish WRC round also saw the last direct encounter between WRC2 Masters title candidates Armin Kremer from Germany and Mauro Miele from Italy. Former European Rally Champion Kremer, sharing a Baumschlager Rallye&Racing run ŠKODA FABIA Rally2 evo with daughter Ella, suffered a puncture in Friday’s third stage, which cost him some 40 seconds. But the German fought back, eventually winning 13 of the 17 stages actually driven. It was the fifth victory of the season for Kremer.

Miele and co-driver Luca Beltrame drove Team Dream One Racing’s ŠKODA FABIA Rally2 evo to second place, postponing the title decision in the class for drivers 50 years and older to the season’s finale. Because Kremer has already reached his personal limit of seven rallies, he has to skip Rally Japan. To overtake Kremer and become the championship’s first ever WRC2 Masters champion, Miele has to win the class in Japan.

ŠKODA FABIA Rally2 evo driver Emil Lindholm has already secured the title in the WRC2 Junior class. But WRC2 Drivers’, WRC2 Teams’ and WRC2 Masters championships will be decided at Rally Japan (10-13 November). Although the country was part of the WRC calendar already from 2004 to 2010, this year’s event is completely new. The location has changed to central Japan and the surface from gravel to asphalt.

Number of the rally: 3
With only Rally Japan left, three drivers of ŠKODA FABIA Rally2 evo only have chances to become WRC2 Drivers’ champion: Andreas Mikkelsen from Norway (who will not compete), Emil Lindholm from Finland and Kajetan Kajetanowicz from Poland.