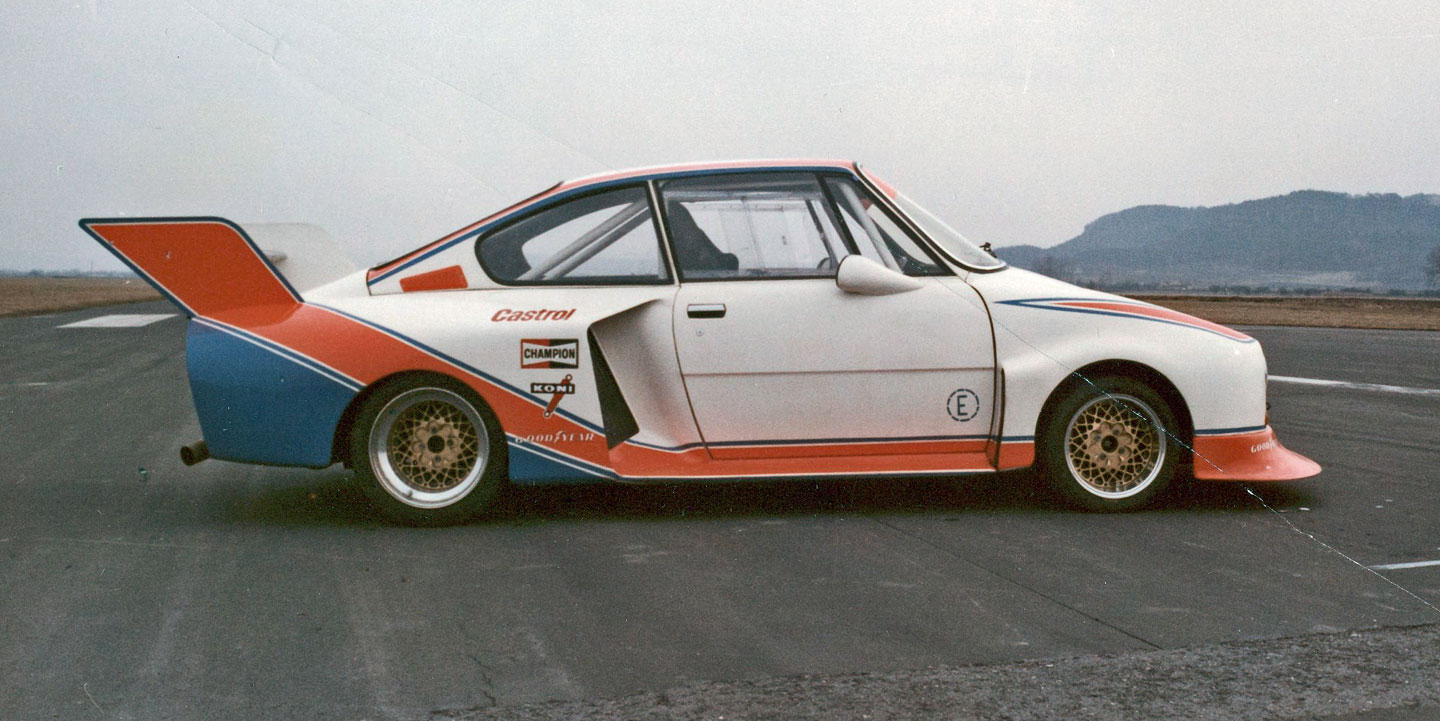 In the late 1970s, ŠKODA developed and built a “silhouette car” based on the well-known ŠKODA 130 RS. It was conceived as racer for both hillclimbs and circuits, and also as a testing ground for the new technologies. It was fitted with the new, advanced 1.6 DOHC engine, which was able to propel it to speeds of up to 250 km/h.

The ŠKODA 130 RS is, without a doubt, one of the greatest legends of Czechoslovakian motorsport. During its active career, this beautifully designed two-door coupe collected countless laurels on tracks at home as well as abroad. Obviously, the best known are the standard circuit and rally variants, but besides these, a number of remarkable and much less known versions were created. In the following paragraphs, we will tell you about one – probably the most extreme of them all.

In the late 1970s, ŠKODA developed and built a “silhouette car” based on the well-known ŠKODA 130 RS. It was conceived as racer for both hillclimbs and circuits, and also as a testing ground for the new technologies. It was fitted with the new, advanced 1.6 DOHC engine, which was able to propel it to speeds of up to 250 km/h. An extensively modified ŠKODA 130 RS, built to comply with the relatively loose category A, group 5 rules (which also included non-homologated prototypes), was first conceived in 1977. The car received internal designation Š 738.

The engineers set out to create a circuit-racing special that would also be able to participate in hillclimbs, if necessary. The primary goal, though, was something else. ŠKODA 130 RS A5 was meant to serve as a test platform for advanced aerodynamics and other new technology for future ŠKODA racecars. The design of the bodywork was focused on maximizing the downforce, but the front-mounted radiator proved to be an obstacle to lowering the front part of the car and creating a more wedge-like profile. In order to make the bonnet much more steeply sloped, the radiator was moved back. This had a profound effect on the overall shape of the car.

The whole front end was designed as a one-piece, removable clamshell with extended wheel wells and a pronounced front spoiler. To save on weight, it was made completely out of fibreglass. The front air-dam, which looked a bit like a snowplough, was obviously designed to serve as a downforce-increasing element, enhancing the grip of the front tyres. At the same time, it reduced the amount of the air flowing under the car, which, in turn, reduced the lift on the front axle and further increased stability. In the end, several versions of the spoiler were created, to be used as the quality of the tarmac demanded. All of them, though, had side vents for brake cooling.

The water and oil radiators were moved to the extended rear side panels with massive air intakes. The rear panels were also fitted with grille-covered vents to prevent the excess hot air from overheating the engine compartment, and also to allow the heat from the Girling disc brakes to escape. To enhance the downforce on the rear axle, the ŠKODA 130 RS A5 was fitted with a huge rear wing. It was adjustable to several positions to adapt to the driver’s preferences, racetrack profile, climatic conditions or the wear of the Goodyear rear tyres. Those were fitted to the lightweight, two-piece rims. For the suspension, engineers went with a modified 130 RS arms with Koni coilovers.

Speed from the future

In the beginning, the car was powered by a water-cooled four-cylinder OHC Š 720 engine, originally from the ŠKODA 180 RS. It was a naturally aspirated 1,771 cc engine with 11.0:1 compression ratio, offering the maximum output of 113 kW (154 PS) at 6,250 rpm. That may not be much by today’s standards, but as the car was mostly built out of fiberglass, aluminium and plexiglass and so weighed in at just 710 kg, and was fitted with a five-speed gearbox, it was enough to allow it to reach a top speed of 210 km/h.

The most powerful engine to appear under the rear deck of ŠKODA 130 RS A5 was the Š 737 prototype unit, designed in cooperation with the Motor Vehicle Research Institute in Prague. The all-aluminium four-cylinder had a bore of 85 mm and stroke of 70 mm, resulting in 1,589 cc of displacement. Besides other improvements, it received a 16-valve cylinder head with DOHC valvetrain. The small 1.6-litre with its 10.63:1 compression ratio offered a maximum output of 137 kW (186 PS) at 8,500 rpm and a maximum torque of 163 Nm at 7,500 rpm. In this version, the ŠKODA 130 RS A5 was able to reach a top speed of 250 km/h (with the right gear ratios). For a naturally aspirated 1.6-litre engine at the end of the 1970s, that was a fantastic achievement.