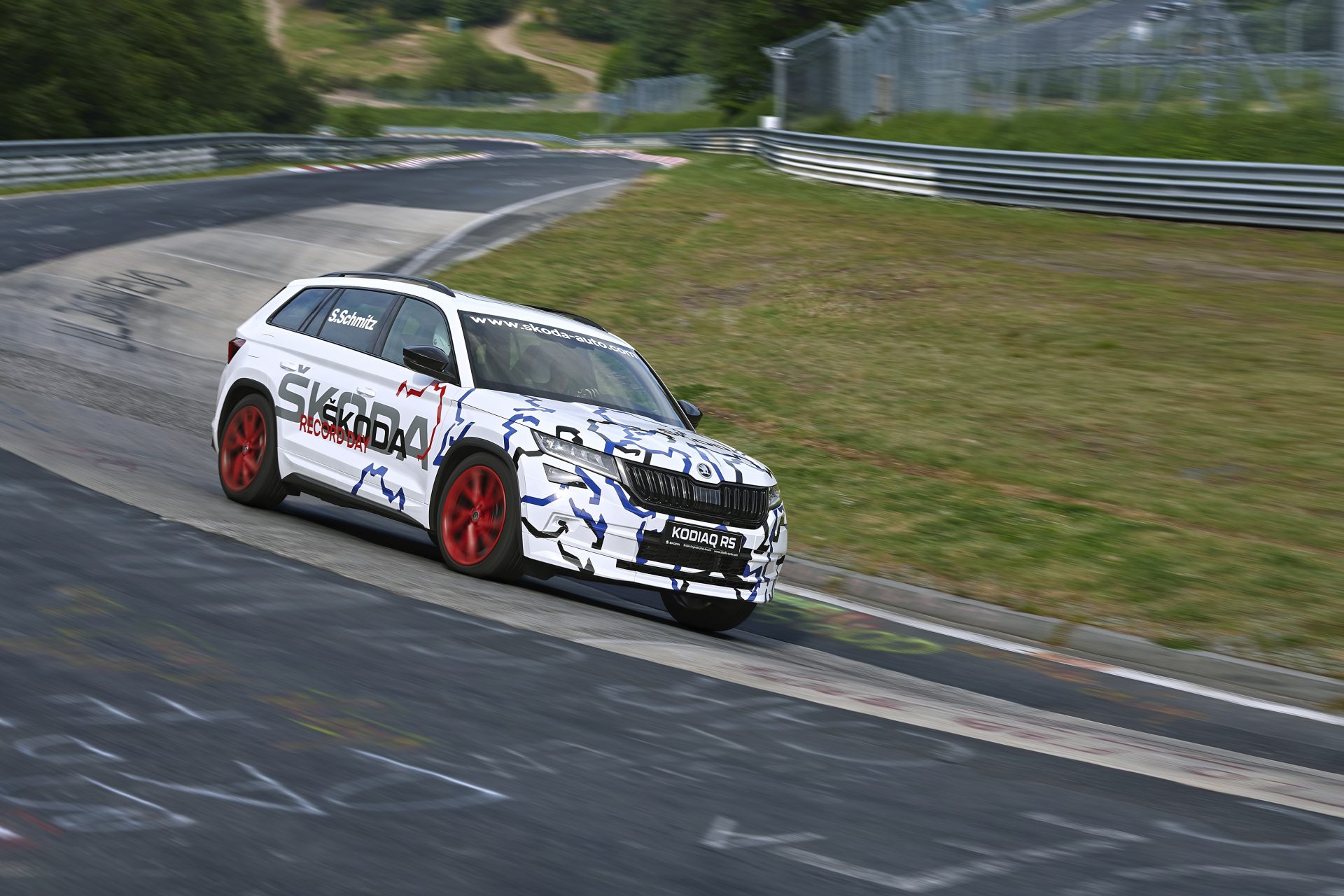 ŠKODA KODIAQ RS and Sabine Schmitz: Breaking the Record in the Green Hell

The first ŠKODA SUV to sport the RS badge, driven by a living legend on the notorious German Nürburgring track, has proved that even a family seven-seater can be fast and exciting.

Few places have such allure for motorsport fans as the Nordchleife – the northern loop of the Nürburgring racing circuit, in the Eifel mountains in Germany. Since it was built in late the 1920s, the track has gained a reputation as one of the most demanding race tracks in the world, and earned the nickname “the Green Hell”.

The Nordschleife is much longer than most modern racing circuits, at more than 21 kilometres, and much narrower. With its tight, winding turns and steep elevation changes, it looks and feels more like a twisty mountain road than a racetrack, and that’s why automakers from all over the world come here to test their cars. If a car is fast at the Nürburgring, it will be fast everywhere.

Achieving a great time – or even a record – on this killer of a track is not only a matter of prestige, but also proof of a car’s real-world capabilities. It shows that the car is not only able to achieve high speed and accelerate quickly, but that it can also cope with treacherous turns, scary crests and varying surfaces.

The biggest names in motoring come here to test their speed. The supercars, the sports cars, the hot hatchbacks and super saloons, even the muscle cars from America. But a seven-seater SUV? Doesn’t that sound a bit, well, crazy?

ŠKODA decided to give it a shot with its first SUV to carry an RS badge. The KODIAQ RS has a 2.0 BiTDI engine delivering 176 kW (239 PS)and is due to be unveiled to the public this autumn. It’s the perfect car to prove that even a large family ŠKODA  can post a great time on the toughest  track in the world.

It was time to hand it over to a tame racing driver. Some say that she’s done more than 30,000 laps in the Green Hell and that she’s the only woman to ever win the 24 Hours Nürburgring endurance race. All we know is, she’s called Sabine Schmitz and she’s also one of the Top Gear presenters.

With the Nürburgring legend behind the wheel and František Drábek, Head of Product Line Compact, riding shotgun, the big SUV set off on its record attempt on 18thMay 2018. The stock-configured KODIAQ RS, wrapped in camouflage so as not to show off any design details before its October premiere, flew around the circuit with surprising agility.

“The car looks sporty, and the drive is sporty. I didn’t think a seven-seater would be so easy to handle, especially on a demanding circuit like the Nordschleife, but I got a  great feeling from it. It drives well. I’m really impressed. This car is absolutely stock – we didn’t change anything. I think that if we’re going to break the lap record, it should be in a car that is actually available for sale, otherwise it doesn’t make any sense. I want to show people what a good car they can buy,” explained Sabine Schmitz, complimenting the KODIAQ RS.

When the big ŠKODA crossed the line at more than 200 km/h, it was clear that the attempt was successful. Thanks to the combination of the powerful engine, the progressive power steering, the dynamic chassis control (DCC) and, of course, Sabine’s skills behind the wheel, the KODIAQ RS became the fastest seven-seater SUV at the Nordschleife, finishing with a time of 9 minutes and 29.84 seconds.

“The RS denotes rally sport and reflects the ŠKODA brand’s motorsport history. People who pursue an active lifestyle will love the KODIAQ RS. A single car enables them to ferry their family around safely and yet also race on a circuit like this one,” said Drábek, as he described the SUV’s virtues.

By claiming this record, the ŠKODA’s new sporty SUV proves that you can have the family practicality, the space and the go-anywhere abilities and still enjoy the fun and the speed, all in one place.

Want to know more about the record run? Read our interviews with both the driver and co-driver at ŠKODA Storyboard, or wait until tomorrow for our profile of Sabine Schmitz. And of course, enjoy the video!