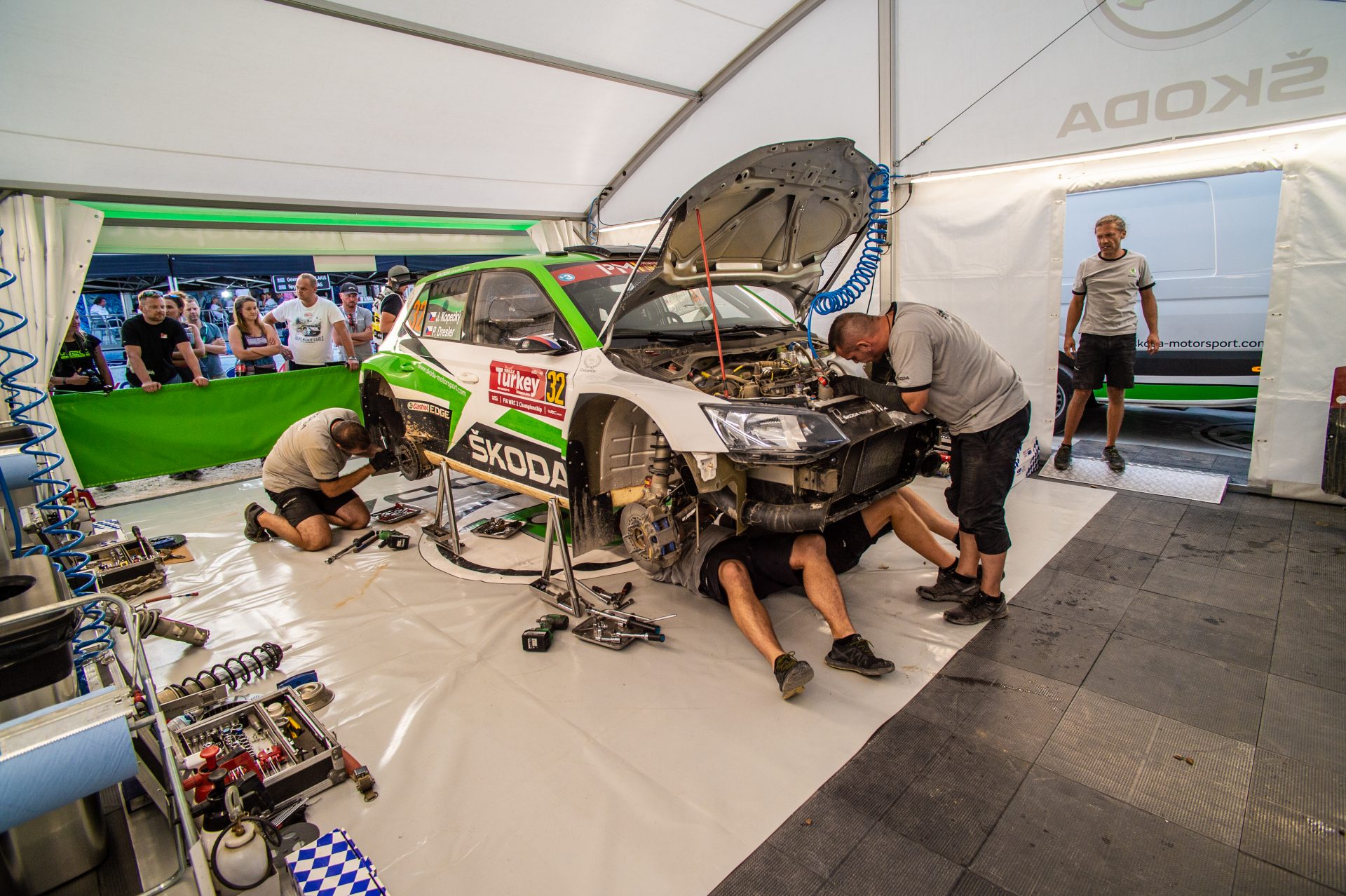 What Happens at Service Park | Beginner’s Guide to Rally

Rallying is hard on cars. Driving at high speeds over bumpy, rocky gravel roads, drifting on forest tracks, jumps, tight and twisty tarmac with lots handbrake turns, everything at full throttle, on the edge of the car’s abilities. It’s obvious that a car can’t survive several hundred kilometres of rally stages without proper care. The service park is the place where it gets what it needs. Let’s look closer at what happens there.

The time is tight

The first important thing to know is that once the cars come into service, it’s not up to team what happens and when. It would be easy to imagine that if something goes wrong on the car in the afternoon stages, mechanics have whole night to fix it.

In fact, the time is much tighter than you may thing. How tight? What about 15 minutes for the morning service, 30 minutes at lunchtime and 45 minutes when the days is done? Those are the typical numbers – sometimes, they change, like after the Friday’s leg of RallyRACC Catalunya. There, the teams have a whopping 75 minutes of time. Because they have to completely change the setup from gravel to tarmac – changing tyres, shocks, springs, brakes and lots of other stuff.

That’s the reason why rally mechanics have to be well-trained and perfectly synchronised. The minutes are running by and there’s a lot to do.

Outside the service park, you’re on your own

A car broke down en-route to the special stage? Had a puncture at the stage itself? Damaged a car after a jump? Well, let’s call the mechanics, let them fix the problem and continue. What can be easier?

Not so fast. At a rally, a crew is not allowed to accept any kind of technical help from the outside – spectators may help you push the car out of the ditch, but changing the wheel or finding a way to fix the damage is up to the driver and co-driver. That’s why, unlike track racing, rally requires you to be not only a good driver, but a decent mechanic as well. You broke the suspension? Be clever and fix it, else you’re out!

At rally, everything is under hardest scrutiny. The FIA marshals are present in the service tents and keep a keen eye on everything. There are limits on what you can and cannot repair – if your car suffers a structural damage, there’s no welding it back together and hoping. You have to retire. And there are also limits on number of supplies. For example, even if you wanted to bring a truckload of tyres, you are only allowed to use a certain number per rally (which differs for each event, typically something around 20 tyres per car).

Are you one of those people who think that cleaning a car is only for show and proper machine should be dirty and beaten? You wouldn’t fit in a rally team. Cleaning a car is actually very important, and it’s done at every service. And it’s not because the team wants their car to look pretty in pictures – the reason is that it’s easy to overlook damage on a dirty car.

The best part about rally service park for spectators? You can go there and watch. Of course, you won’t be allowed inside the service tent, but you can see everyting from the outside. And trust us that watching the team mechanics at works is fascinating!