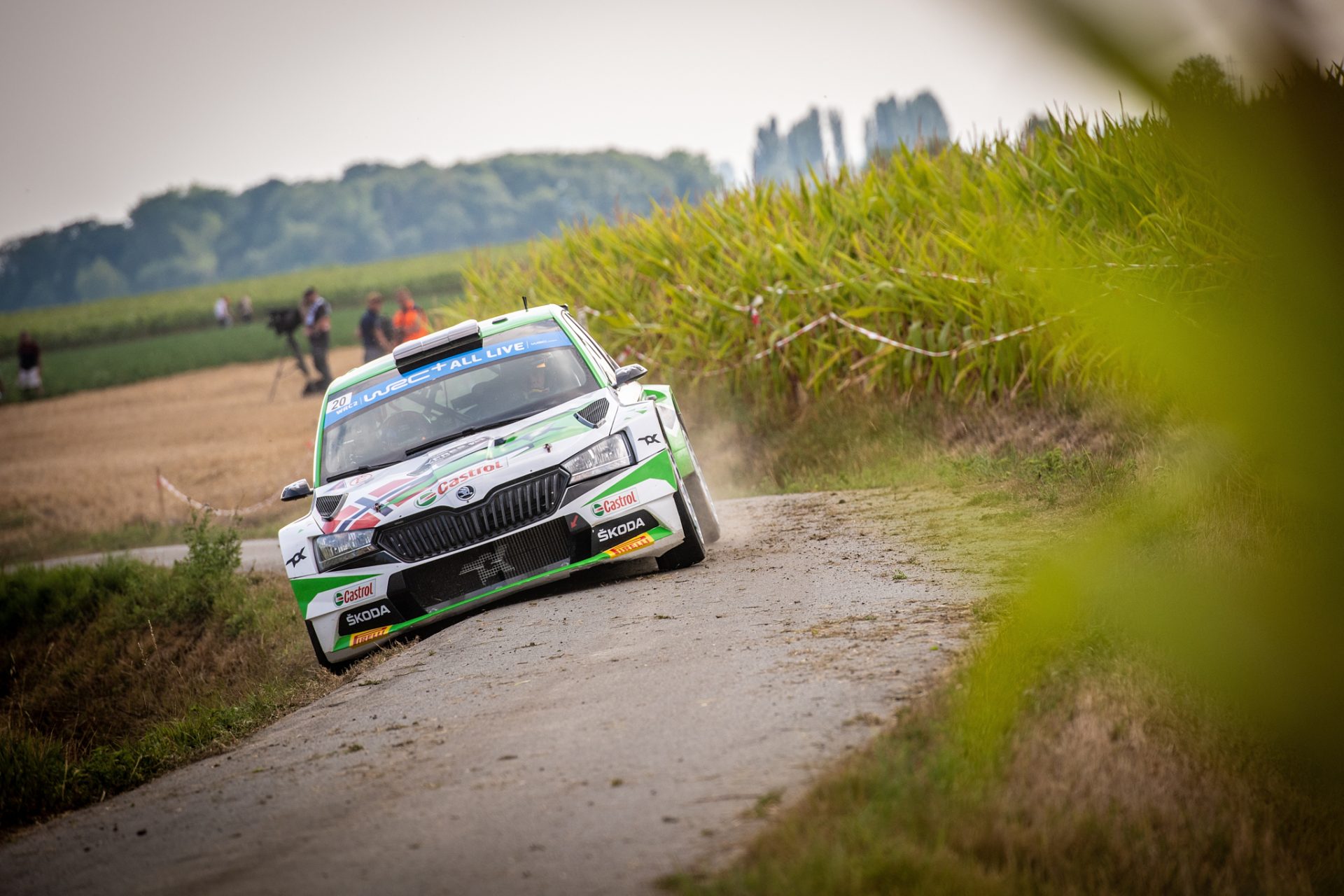 Andreas Mikkelsen came as WRC2 overall leader to Ypres, a picturesque town in the western part of Belgium. With runner-up Kajetan Kajetanowicz (POL) and third-placed Emil Lindholm (FIN) absent, the Norwegian ŠKODA driver’s main focus was on Yohan Rossel. Coming to the ninth of 13 WRC rounds, the Frenchman was listed fourth in the WRC2 overall rankings. “It is important to beat my direct title rivals,” said Mikkelsen at the start line, describing his strategy for the at that point remaining two rallies of his WRC2 campaign.

During the first leg, occasional rain in combination with extensive corner cutting, which dragged loose gravel and mud onto the roads, made conditions very treacherous. Unsurprisingly, the hopes of numerous crews ended in one of the countless ditches alongside the narrow and fast tarmac stages. Initially, WRC2 saw a three-way fight of Norwegians Andreas Mikkelsen/Torstein Eriksen versus the French crews Stéphane Lefebvre/Andy Malfoy and Yohan Rossel/Valentin Sarreaud. On Saturday afternoon, it was down to a duel between leader Lefebvre and second placed Mikkelsen. The defending WRC2 champion could have pushed harder to put pressure onto Lefebvre. But the French driver, a regular in the Belgian national championship, plays no role in the hunt for the WRC2 title. So, Mikkelsen decided to play it safe. “There is a lot of gravel on the road and a lot of risk to go for it. Also, Stéphane knows the roads better. If I go off, the championship is gone,“ the Norwegian described the process of finding the right balance between speed and cleverness.

In the end, Mikkelsen reached the finish second to Lefebvre, but more important one place up on Rossel. Also, the Norwegian ŠKODA driver won the rally closing Power Stage, worth an additional three points. With one more WRC2 round to go for Mikkelsen, his lead over French title rival Rossel has increased slightly from 16 to 20 points. ”I knew, I needed to score maximum points here and in Greece,” Mikkelsen said at the finish. Although the first part of this plan didn’t exactly work out, the WRC2 champion stays optimistic. “Second place in Belgium is still not so bad. Stéphane's pace was very difficult to match and he did a great rally.”

From Belgian asphalt the FIA World Rally Championship now switches to rough Greek gravel. Next on the menu is Acropolis Rally Greece (8-11 September).

Number of the rally: 2
For the first time during the 2022 season, ŠKODA driver Andreas Mikkelsen finished a rally in second position. So far, the defending WRC2 champion and co-driver Torstein Eriksen won the category on three events. On the other hand, they also had to book two retirements.