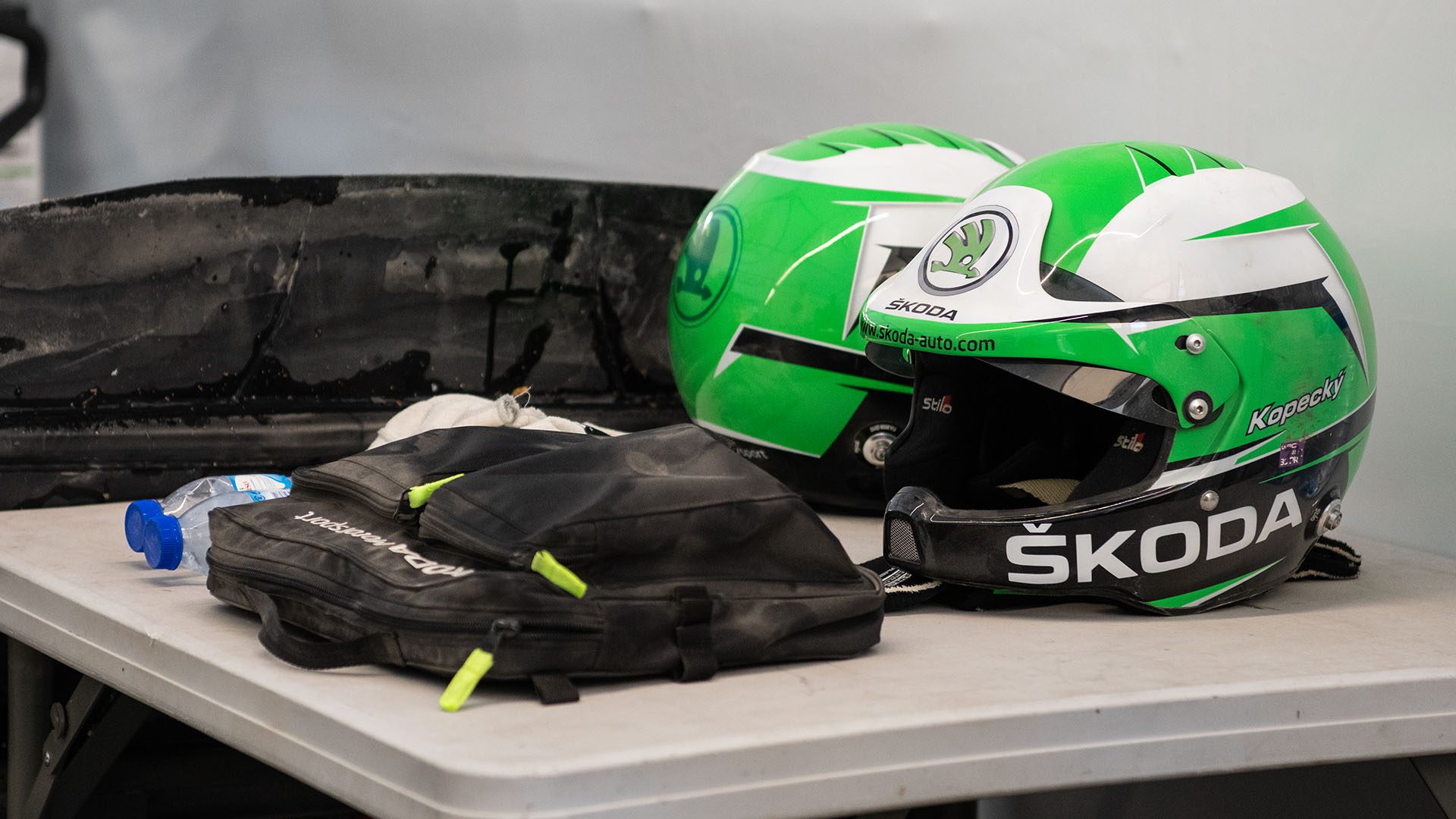 10 Essentials of a Rally Driver

When the ŠKODA FABIA Rally2 crew sets off, their equipment is very different from what ordinary people have in their cars. There are no keys for the rally car, no ABS or airbags; the AC is absent, as is the navigation and the inner rearview mirror. On the other hand, there are a lot of other things, without which the technical and sporting marshals would not let the car onto the stage - and even if they did, the crew’s life would be much harder. Let’s have a look at the essentials for every driver and co-driver.

The overalls are custom made for every driver and co-driver, and each team creates its own design. At the same time, the overalls have to conform to the stringent standards of the FIA (International Automobile Federation), for things like fire resistance. The same is true for shirts, trousers, balaclavas, gloves and helmet. Each piece of equipment is fitted with a homologation tag, which is checked during the technical inspection – without it, you can’t take part in the rally. The crew must wear the fire-resistant underwear for the whole duration of the rally. In ŠKODA Motorsport, each crew member has four sets of overalls for rallies and three more for testing. The helmet also includes the headphones and microphones, which transmit voices and eliminate other sounds, so the crew members can hear each other.

Not many motorists are able to do roadside repairs these days. In rally, provisional repairs are often necessary. That’s why the crews carry a lot of spare parts, especially for suspension. These are mounted on the rollcage in the rear part of the car, so they are not in the way when, for example, the crew need to remove the spare wheel. There are also replacement fluids – half a litre of engine oil and half a litre of brake fluid – a replacement belt, and other necessities such as duct tape, zip ties, glues, connectors, pieces of wiring and so on. Each crew uses different tools according to their preferences.

A tyre repair kit would not do you much good during the gruelling Rally Turkey, or similar events. For Rally2 cars, it’s mandatory to have at least one spare wheel, with a maximum of two being allowed by the rules. However, even two may not be enough sometimes. The spares don’t have to be of the same type, so the crew can carry one with a soft tyre compound and the other with a hard compound. The spare wheel itself is mounted with a quick-release strap, which allows the crew to get it out of the car quickly. The dual-action hydraulic jack is also special; it’s been custom developed by the ŠKODA Motorsport technicians. It’s very light and makes it possible to lift the car in a very short time. An impact wrench with a spare battery is used to tighten the wheel lugs, but there is also a normal wrench on board.

The cars have to be fitted with two types of fire extinguishing systems. The hand-held fire extinguisher is mounted in front of the co-drivers seat and is used to fight smaller fires. The automatic fire suppression system is electronically controlled, contains three kilograms of fire suppressant, and is placed behind the co-driver’s seat. When activated, the aluminium piping spreads the fire suppressant in the cockpit and the engine bay. The system is activated by a button inside the car, or a switch under the windscreen. Its purpose, however, is not to save the whole car from fire, but to give the crew time to escape. The homologation includes real tests, when a fire is simulated and the effectiveness of its suppression is evaluated.

The six-point safety harness is also subject to very stringent inspections. The FIA even defines the angles of mounting of individual safety belts and during every technical inspection, the marshals check for any damage. The correct setup of the lower belt, which is mounted to the car’s floor and goes through an opening in the seat, is very important. The shoulder belts have to be set up as well, with the position of the buckles on the chest being all-important. The side belts are easy to set up and everything has to fit into the safety buckle correctly. This buckle opens all six belts by a single twist of a lever, allowing for a quick exit from the car. In case the buckle fails, the crew has to have the safety cutter within reach, to allow them to cut the belts and escape the crashed car if necessary.

The safety rollcage weighs around 52 kilograms and uses 34 metres of chrome-molybdene tubes. There is also a limit to the maximum allowed deformation by a set force, which the rollcage has to be able to withstand. The FIA has requirements for the construction, various types of connections, their diameters and minimum thickness. It is also important to place the rollcage as close to the bodywork as possible, to create the required opening for the crew to enter through the side doors. The rollcage is one of the most important pieces of safety equipment and it can save the lives of the crew in the event of a crash. That’s why FIA marshals check it for damage after any crash. If the rollcage is damaged, the car is not allowed to continue.

It’s not a name of a German co-driver, but an essential part of the crew’s safety equipment. In the past, injuries to the cervical or thorax vertebrae often occurred in crashes. After extensive FIA-funded research, the HANS was introduced. It’s a device set on the racer’s shoulders and directly connected to his helmet. In a crash, it reduces head movement and eliminates damage to the neck. The whole system was continuously developed and today, the most preferred is the “Hybrid” type, which is also connected to the upper part of torso.

Side impact is extremely dangerous and safety experts pay a lot of attention to this area. Among the important parts of the crew protection systems are the safety foams, placed in the doors and between the seat and the door. These are able to absorb a huge amount of energy in a crash. Also, the door panels have to be made of special material. They consist of six layers of carbon and Kevlar of precisely defined compound and weight. Yes, that’s the same Kevlar that’s used to make bulletproof vests! The side windows are made of polycarbonate with a minimum thickness of 4 mm. It has to be possible for them to be removed without any tools.

Racing car seats can only be adjusted using safety memory foams; other than that, their parameters and dimensions are fixed. There is also a choice between several cushions, allowing the seat to be suited to the individual racer’s needs. The size of the seat and the seating position are very important – the rules say that the side bolsters protecting the head cannot be lower than the racer’s eyes. The head also cannot stick out from the seat, to prevent injury in a side impact. That’s why most top drivers have their seats custom-made. Seat height and lateral movement are adjusted using aluminium holders, which are mounted into the bodywork. Besides the seat, the placement of the pedal box can also be altered laterally, as can its angle. In the case of the ŠKODA FABIA Rally2, it can be set into four positions divided by 25 mm.

Not everything is so different from driving a normal car. The crew of the rally machine carry water, food, documents (green card, registration certificate) and a mobile phone; which they, unlike many drivers, don’t use while driving. If the rally takes place somewhere remote, without a good cell phone signal, a satellite phone is used. After each stage, the co-driver sends a message with information about the car’s condition and the driver’s report on the car’s settings and the condition of the tyres. The crew also sends information from the temperature and pressure sensors, shown on the main display. In the event of a crash, photos of the damage are all-important. The race engineer serves as a “friend on the phone” for the crew, helping them to solve any problems.