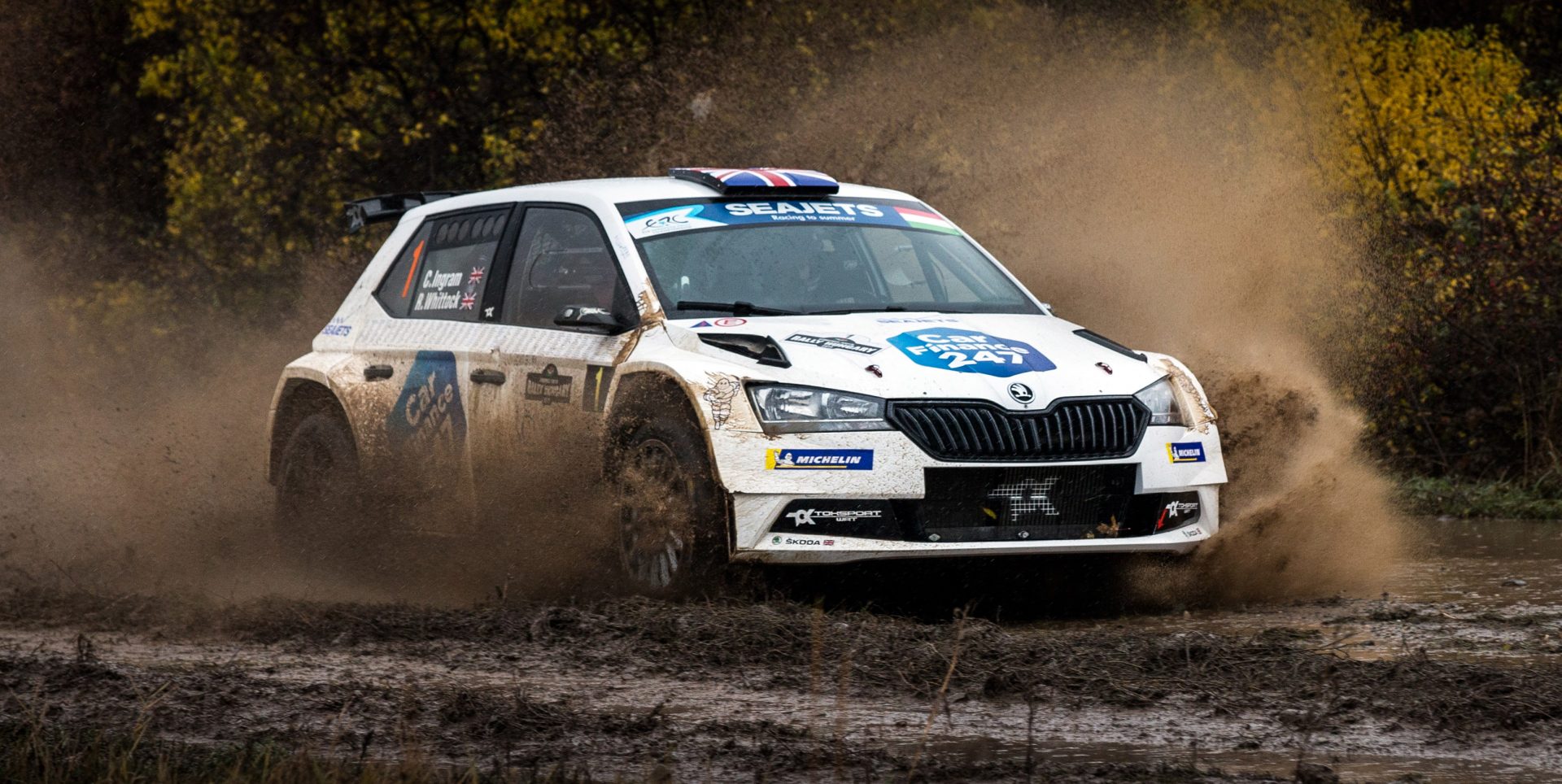 A Battle to the Very Last Kilometre. How Chris Ingram Conquered Europe

It took until the final round of the European Rally Championship in Hungary for British driver Chris Ingram to secure the 2019 title with his ŠKODA FABIA R5 evo. The eight rounds of this year’s 67th European Rally Championship saw a stunning fight for the title which continued until the very last round in Hungary. To make it even more interesting, this rally was a new addition to the calendar, which made the season’s climax even more exciting.

Three drivers went to Hungary with a chance at winning the title – the competition was between Alexey Lukyanyuk from Russia, who has replaced his Ford Fiesta with a Citroën C3, Lukasz Habaj from Poland and British driver Chris Ingram in a ŠKODA FABIA R5 evo. Habaj had his first accident in the shakedown and when he also crashed during the first day, it was obvious that the remaining two would be battling it out for the title. Lukyanyuk needed a victory (and he was leading the rally for some time), while for Ingram, it was enough to place third, and he stuck to this plan.

Decision on the last stage

The drama continued until the very end. First, Chris Ingram suffered a puncture, which dropped him down to 3rd place in the overall classification. That would still have been enough to secure the title, but then he had another puncture on the last stage, which resulted in the loss of two minutes and his podium position. However, Lukyanyuk suffered a puncture as well; he had to change his wheel on the track and lost three and a half minutes. He only dropped to second place, but that was enough for Chris Ingram and Ross Whittock to take the title.

“I can’t believe it! The support we received was great and I’m grateful for that. The title belongs to everyone who helped. Ross Whittock was unbelievable, the most reliable and focused man in the world. Our team, Tiksport WRT, was wonderful, and the car was wonderful as well,” said the new European champion.

A victory won by hard work

Chris Ingram is a great talent. He started rallying in the British championship when he was 15 years old. In his debut season, he won six out of seven rallies in the F1000 class and finished second overall. When he was 17, he switched to the Renault Twingo R.S. in the R2 class and claimed the Renault Sport R2 Twingo Trophy. In the same year, he also tried the Clio R3 in the Rallye du Var and managed to reach the final battle for the title of Britain’s young driver of the year. The jury included big names like Robert Reid (Richard Burns’ co-driver) and David Brabham. After a series of challenging tests, Chris managed to beat four competitors to become the MSA Young Driver of the Year.

In 2013, he first appeared in a World Rally Championship round – the British rally – and he won the R2 class straight away. His first title under the FIA came in 2016, when he became the European champion in the R3 category for front-wheel-drive cars.

This year, he narrowly missed the ERC junior title – by just three tenths of a second - at the Barum Rally in Zlín. This cost him the 100,000 EUR reward which he needed to successfully complete the season. However, thanks to the crowdfunding campaign led by his father Jo Ingram, the necessary funds were secured and Chris could go on to fight for victory in the overall classification. It’s also worth noting that he managed to claim the European title without winning a single rally. His outstanding reliability was enough, as he retired from just one out of the eight rounds.