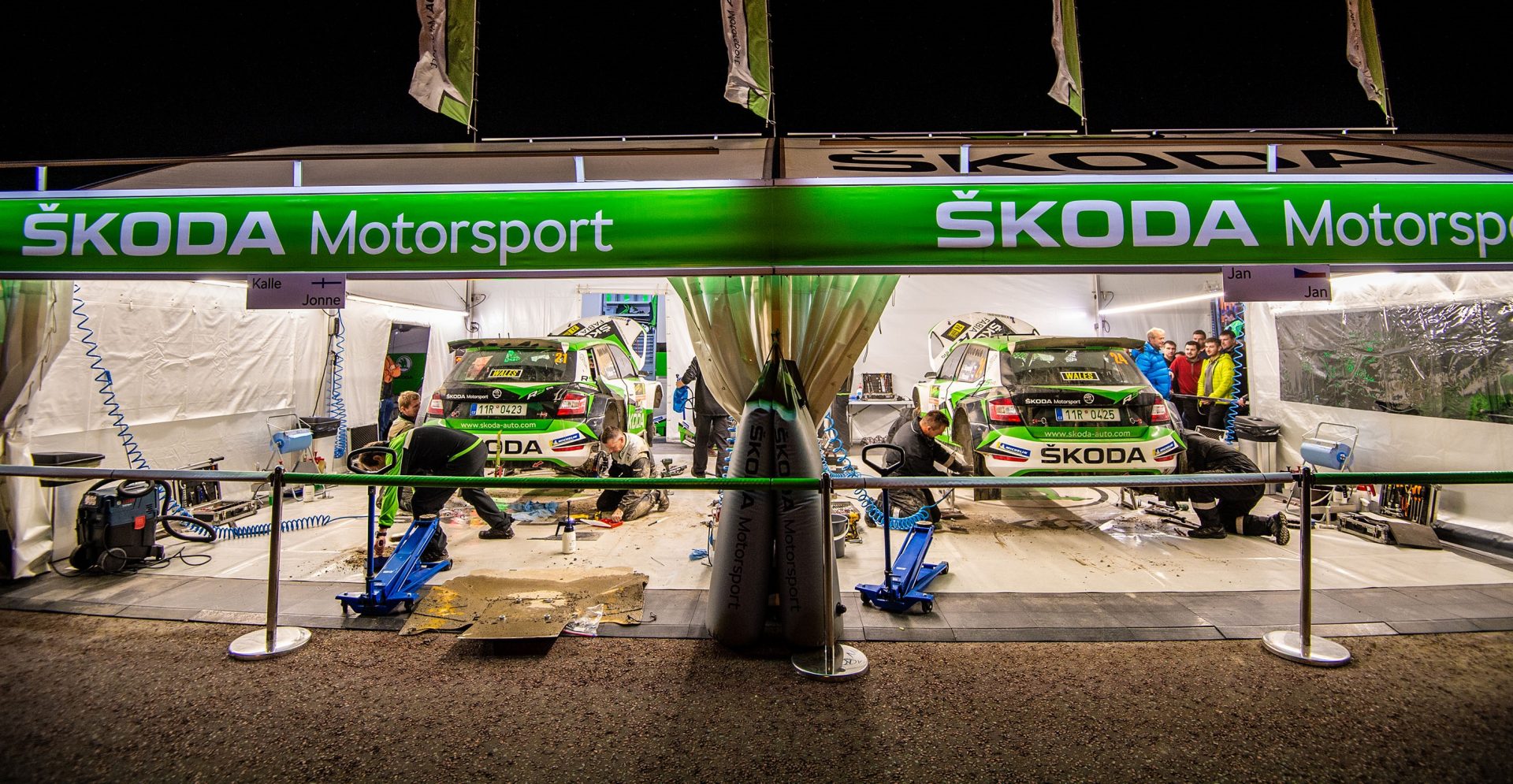 Do you know what fighter pilots and rally drivers have in common? Neither can survive without their mechanics. Open any fighter pilot’s memoirs and you always find a “thank you” dedicated to their mechanics. In the same way, every rally champion first gives thanks to their team for their perfectly prepared car. This symbiosis is the key to championship titles. The ŠKODA Motorsport works team already has five of these in the constructor’s championship. The devotion to victory runs through the whole team, transferring from the team to the drivers and vice versa. That’s why the whole team often goes to the podium, instead of just the winning crew.

Let’s recall three moments when the mechanics’ performance played a key role. Without their fantastic work, this year’s championship title for ŠKODA Motorsport would have been in jeopardy, to say the least.

This year’s Rally Turkey started promisingly. After the super special stage through the streets of Marmaris, Kalle Rovanperä was not only leading the WRC 2 Pro category, but he had even managed to beat three WRC cars. His speed was alright, but that’s not enough in Turkey. There, on the rough surface that’s more akin to Rally Dakar, you need a good bit of luck as well. The kind of luck that will help you to avoid wholly unpredictable punctures. And this year, Kalle and Jonne didn’t have that luck. They lost their first tyre right in the second stage, and before they had even changed the tyre, Kalle lost his focus in an innocent-looking right hander, when he went more sideways than was needed, his ŠKODA FABIA R5 evo ending up on its roof.

The spectators helped to turn the car back on its wheels and the crew could continue, but in the very next stage, the Finns had another two punctures. That caused a problem, as the car is only equipped with two spare tyres. They managed to finish the morning’s last test, but the Michelin tyres didn’t survive long enough for them to make it to service area. The FIA marshals stopped the crew roughly mid-way through the transport stage and forbade them from continuing. This meant that the car only got to the mechanics’ care in the late afternoon, with most of its body panels damaged – not only from the rolling, but also from the rear left tyre shredding and making a real mess out of the wheel well.

Around three o’clock, the team’s ballet of makeshift repairs begun. All kinds of tools were used, including large hammers, circular saws and welders, to help the ŠKODA FABIA R5 evo to regain its original shape. Among the body parts that needed repairs were the sills, the roof, the windshield frame including the replacement windshield, the rear door, the quarter panel and several other parts. Several hours of hard labour made it possible to continue under the SuperRally rules and the resulting third place meant gaining important points for the constructors’ championship. Afterwards, Kalle and Jonne personally thanked to each mechanic for their great work.

Another important moment of this season, where the team of mechanics played a crucial role, was on Saturday evening at Rally Wales GB. In the second run of the legendary Sweet Lamb special stage, the ŠKODA FABIA R5 evo driven by Jan Kopecký and Jan Hloušek hit a wooden pole on the inside of the left-hand corner, rolled over its roof and ended up by the side of the track on its left side. Fortunately, the accident happened at low speed, so the crew, after help from the fans, could continue. The complications, however, showed up during the evening’s service.

Anytime a car rolls over, the FIA marshals check the condition of the rollcage, which is a crucial safety feature in rally. Any damage significantly decreases the structural rigidity of the cars, jeopardizing the crew’s safety. For that reason, any damage to the rollcage usually means retiring from the rally. During the 45-minute-long service, it was first necessary to wait for the marshals to check the frame and confirm that the car was able to continue in the rally. Only in the remaining, very limited time, was it possible to do the standard, planned service tasks – which are even harder to do in Wales, due to the amount of mud collected by the speeding cars.

However, the team won their race against time and the car was able to leave for the parc fermé as planned. The points collected by Kopecký and Hloušek, for second place, were very important in the overall standings.

Changing the suspension in Spain

RallyRACC Catalunya is unique in that its surface changes from gravel to tarmac between the first and second day. You won’t encounter such a thing in any other round of the WRC. For the teams, this means it’s necessary to completely change the car from a gravel to a tarmac spec during the Friday evening service – in just 75 minutes. In order to imagine what that means, let’s look the tasks this this job involves.

Among other things, it’s necessary to replace all the shock absorbers, brakes, axles with both differentials and lots of other smaller parts. To make it even more difficult, Friday’s service starts long after 8 P.M. and the stressful environment of a challenging rally doesn’t help to keep the team calm. Then, there’s another important thing – finding the right tarmac setup. Putting it all together means nothing until the baptism of fire in the Saturday’s first stage. That’s why mechanics say, with just a slight exaggeration, that the change of setup doesn’t end for them until Saturday morning. Only then can they confidently say that they did a good job.

On this year’s RallyRACC Catalunya, the team managed to change the setup in a little over 45 minutes and the Saturday stages proved that it was, as usual, absolutely flawless.

Want more dramatic stories from the life of the ŠKODA Motorsport mechanics? Recall the most thrilling moments of the last season at ŠKODA Storyboard.