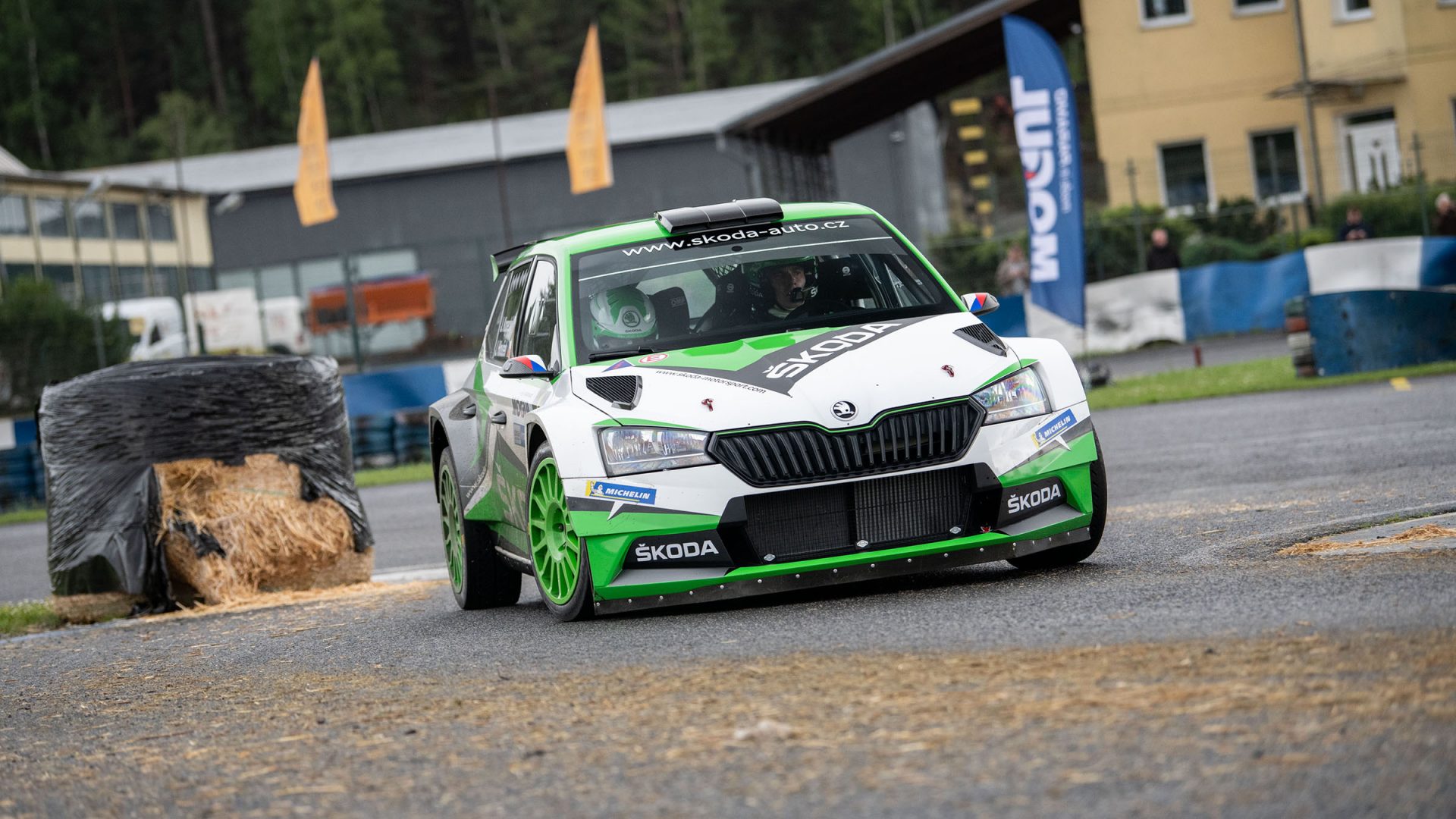 After three months of enforced pause, the ŠKODA Motorsport team have returned to real competition. Jan Kopecký and Jan Hloušek were the fastest Rally2 crew in two out of three stages of the Mogul Test Rally. A puncture in the second stage cost the works crew the first place, but even so, a ŠKODA car won in the end.

The organizers of the Mogul Test Rally, which takes place on the well-known kart track in Sosnová, Czech Republic, prepared 30 competitive kilometres, divided into three different stages. Each of them included five laps of the two-kilometre circuit. With the exception of the faster rear section, the tight track is really technical, and therefore a perfect opportunity for the crews to regain their grip on handling the rally car. To make it even more interesting, it rained for most of the day, so the surface was really slippery and the concrete block lining the track looked as unforgiving as those on the famous Panzerplatte.

The crew of two Jans started out well. In the first stage, the works crew was the fastest, 3.5 seconds ahead of Vojtěch Štajf in his Volkswagen Polo GTI Rally2. The 2018 WRC 2 champion felt really good about the new Michelin wet tyres. “The tyres worked great. Compared to the soft slicks, they have much more grip, so we could go really fast. Unfortunately, we couldn’t avoid a puncture in the second stage, where we sliced the sidewall of the tyre against the outer edge of the curb when we cut a corner. It’s unfortunate, but such things happen in rally. Hopefully, we’ve used up our share of bad luck before the Bohemia Rally, which takes place in three weeks,” explained Kopecký.

Even with a penalisation for a non-completed stage, the ŠKODA Motorsport team began the third stage with total determination and Kopecký and Hloušek once again managed to beat all the Rally2 cars. Only Václav Pech in his Ford Focus WRC was faster. Although he finished 16th, Jan Kopecký was satisfied with the event. “It was nice to be back in the rally car after such a long time. Sosnová is not a track where you can go as fast as in a rally, but still, it was a pleasant ride. The cars were fun on the wet track!” he concluded.

The overall winner of the Mogul Test Rally was Petr Semerád in a ŠKODA FABIA Rally2, prepared by the Topp-cars Rally Team. The young Czech driver complimented the car: “The car was working great. We made only little changes to the set-up, as the car was working as it should from the very beginning. It was up to me to push it to the limit. And when you reach the limits of the FABIA Rally2 evo, it’s an amazing experience. In the last stage, I felt the pressure from Vojta Štajf, but I was sure that we could keep the lead. I set the pace which I was sure was fine both for me and the car, and enough to reach the finish safely. Which we did,” explained Semerád.