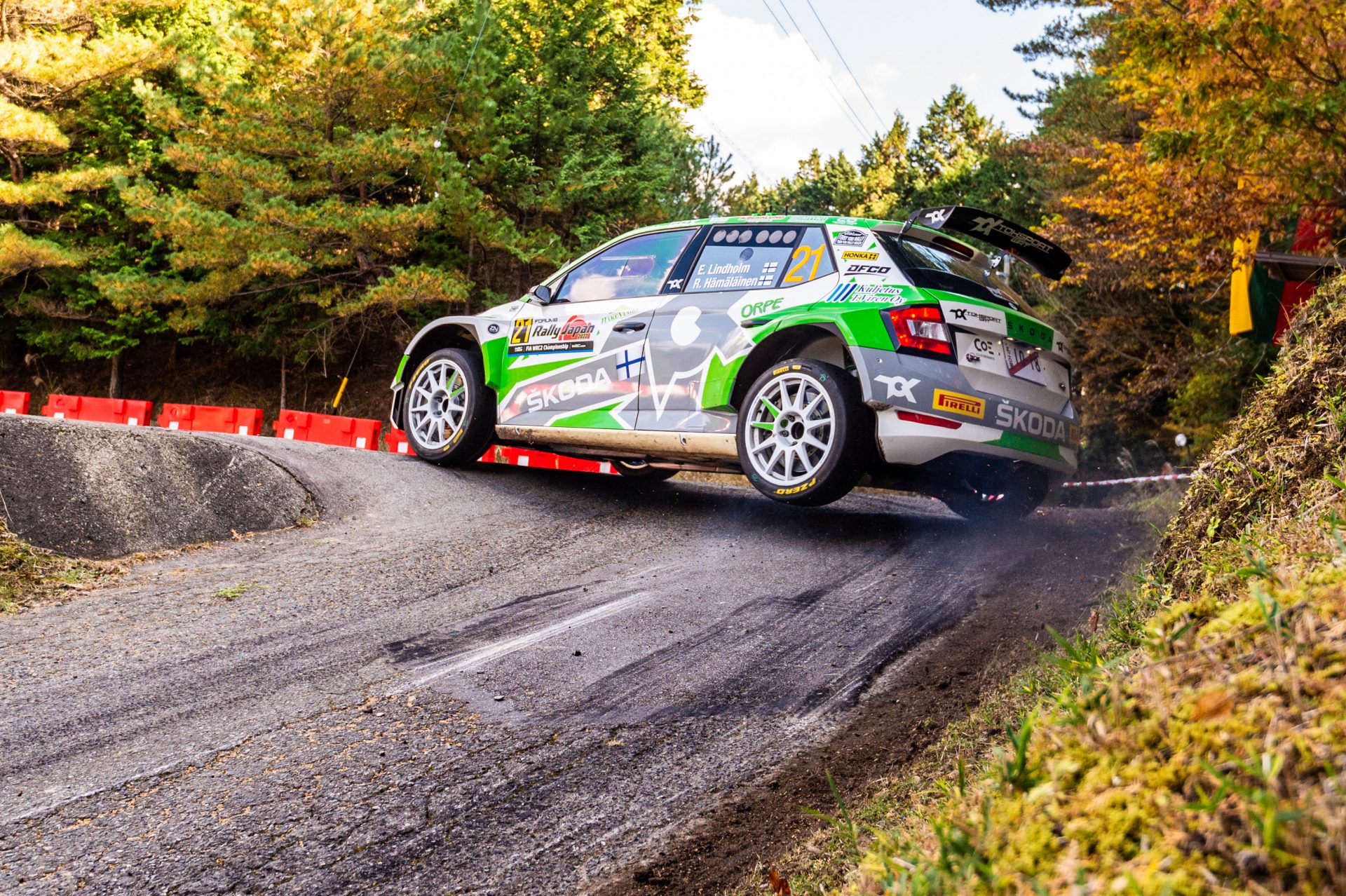 While in the WRC category the driver and team titles were already decided long before the Rally Japan, in the WRC2 category there were still three crews in play for the title before the start in the land of the rising sun. And it was drama right to the very end.

The title math was clear before the last race. The Andreas Mikkelsen/Torstein Eriksen crew had 109 points. The Norwegians were absent in Japan because they had completed the maximum seven rallies allowed by the regulations. Thus, it was clear that they would not add any more points in Japan. On the other hand, the Polish Kajetanowicz of the Polish ORLEN team and Finn Emil Lindholm of the ŠKODA Motorsport-supported Toksport WRT team arrived in Japan with an identical 104 points. After taking into account the rule of only counting the six best results of the season, the Polish crew was left with 96 points and the Finns with 101. Emil Lindholm and co-driver Reeta Hämäläinen therefore enjoyed a small points advantage, which could have given them a little more peace of mind on the narrow and slippery stages of the Japanese rally.

However, the Polish duo's hopes were extinguished on the second stage, where former FIA European Rally Championship champion Kajetan Kajetanowicz and his co-driver Maciej Szczepaniak crashed into a wall on the exit of the famous Isegami tunnel. The car was so damaged that it was impossible to continue the competition. The Finns, on the other hand, found the demanding stages to their taste. The Lindholm/Hämäläinen crew finished Friday's stage in third place, less than 9 seconds behind their leading teammates Sami Pajari/Enni Mälkönen. During Saturday's stage, Lindholm then took the lead by a respectable margin of more than 47 seconds. But Sunday's rain changed everything. After choosing the wrong tyres, the Pajari/Mälkönen crew lost a lot of time and eventually dropped to fifth in the WRC2 category. During the penultimate stage, Lindholm/Hämäläinen managed the clock without any damage to their ŠKODA FABIA Rally2 evo, but picked up a gap of more than a minute. With one final stage to go, it became the Finns' priority to survive. In the end, they reached the finish line in third place overall in the WRC2 category, securing the overall season title* by seven points over the Norwegian crew of MIkkelsen/Eriksen.

It was Lindholm's second title* this season, as he also won the WRC2 Junior* category. "To be honest, it will take a while to realise that. We've had some tough times, but I'm very grateful to the people who continue to support us. It seems to be finally paying off," said 26-year-old Lindholm. The points that Mikkelsen and Lindholm have accumulated throughout the season, as well as the points scored by Lindholm and Pajari during the Rally Japan, have secured the ŠKODA Motorsport supported Toksport WRT the WRC2 team title*.

The last round of the World Championship brought another win for the ŠKODA FABIA Rally2 evo team. In addition to the Japanese victory in the new WRC2 Masters category for drivers over 50 years of age, Italians Mauro Miele and Luca Beltrame also took the overall category title*. Mauro also secured the best finish for a ŠKODA FABIA Rally2 evo in the final Power Stage, finishing second overall. Only Craigh Breen, driving a FORD Puma Rally1, was ahead of him. The driving of former Formula 1 driver Heikki Kovalainen was also noteworthy. The 41-year-old Finn won the Japanese Championship and finished an outstanding fourth in the WRC2 category in his debut start in the FIA World Championship.