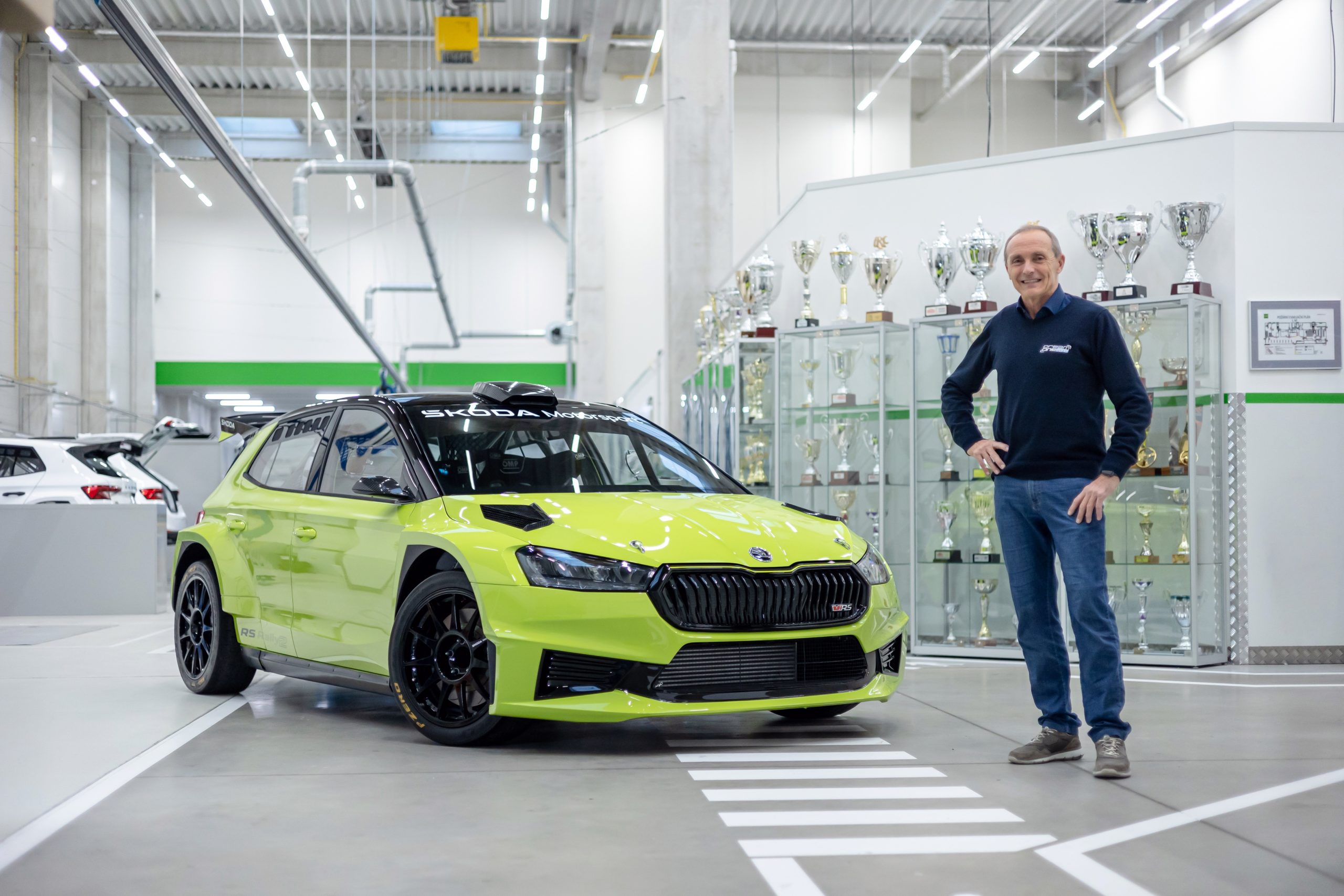 Mladá Boleslav, 18 January 2023 – 75 entries are accepted for Rallye Monte-Carlo (19-22 January), opening round of the 2023 FIA World Rally Championship (WRC). No less than 22 of them are Škoda Fabia in different specifications, including seven examples of the all-new Škoda Fabia RS Rally2. The latest version of the most successful car of the category makes it’s world championship debut during the most famous rally on the WRC calendar.

Following a tradition going back to the series inaugural season in 1973, Rallye Monte-Carlo again kicks off the FIA World Rally Championship. The 2023 edition also sees the world championship debut of the Škoda Fabia RS Rally2. The all-new car from the Czech brand follows in the footsteps of the Škoda Fabia Rally2 evo, which won the WRC2 category at last year’s ‘Monte’ and also carried Emil Lindholm to the 2022 titles of WRC2 Drivers’ Champion and WRC2 Junior Champion.

The Škoda Fabia RS Rally2 is the first Fabia competition variant, which shows the legendary letters RS in its name.

“RS – at Škoda, these two letters symbolise decades of motorsport tradition and countless victories on the international race tracks and rally circuits. As a new member of the RS family, the Škoda Fabia RS Rally2 has all the credentials to continue this success story.“

WRC2 title holder Emil Lindholm is not among the field of 41 Rally2 competitors entered into the season-opener. The Finn and co-driver Reeta Hämäläinen have voluntarily waived Rallye Monte-Carlo and start their title defence at the next WRC round in Sweden (9-12 February). “In WRC2, we are only allowed to score points from seven of the 13 WRC rounds. We prefer to kick off our season on the full-snow stages of Sweden,” Lindholm explains.

Still, with a total of 22 crews relying on the Škoda Fabia during Rallye Monte-Carlo, a handful of them are among the favourites for WRC2 victory. Two young drivers stand out in particular, both competing with the latest version Škoda Fabia RS Rally2: 22-year-old Marco Bulacia from Bolivia and Czech Eric Cais, who is only one year older.

Cais and co-driver Petr Těšínský finished the Rallye Monte-Carlo 2022 second in WRC2. With last year’s winners Andreas Mikkelsen/Torstein Eriksen (Škoda Fabia Rally2 evo) absent, the Czech crew of team Orsák Rally Sport carries the burden of being favourites. On the other hand, Bulacia delivered his WRC2 debut with the Rallye Monte-Carlo in 2021 at the wheel of a Toksport WRT run Škoda. Now, he is back for the reigning WRC2 Teams’ Champion, together with new co-driver Axel Coronado from Spain. “In 2021, I finished the Rallye Monte-Carlo fourth in WRC2. Of course I want to build on this result. The new Škoda Fabia RS Rally2 will certainly help me to do that. Still, I have a lot of respect for the legendary ‘Monte’ stages,” Bulacia emphasizes.

Two candidates for victory in the WRC Masters Cup, which is reserved for drivers over 50 years of age, also drive Škoda Fabia RS Rally2. Reigning WRC2 Masters Champion Mauro Miele (Dream One Racing) from Italy faces opposition from local hero François Delecour (Toksport WRT). The Frenchman is no newcomer to the podium of Rallye Monte-Carlo – he won the event overall back in 1994.

Although regulations allow drivers competing for WRC2 titles to score points in seven events only, nothing prevents them from entering additional rallies outside the championship classification. One of them is Swedish-Norwegian youngster Oliver Solberg. During Rallye Monte-Carlo, the 21 years old son of former world champion Petter Solberg shares a Toksport WRT run Škoda Fabia RS Rally2 with British co-driver Elliott Edmondson. Also driving for the Germany-based team is the Sami Pajari/Enni Mälkönen crew from Finland. Also 21 years of age, Pajari won the FIA Junior World rally Championship in 2021 and now steps up to a full WRC2 season. Both Pajari and Solberg use Rallye Monte-Carlo as a warm-up for their respective WRC2 championship campaigns to start at Rally Sweden.

The fight for the WRC2 title is set to enter full swing not before Rally Mexico (16-19 March), the third round of the 2023 season. Among the Škoda drivers expected to join at that point are last year’s WRC2 third overall Kajetan Kajetanowicz from Poland and Gus Greensmith from the United Kingdom, who after some years in Rally1 machinery steps back to a Rally2 car from Mladá Boleslav.

To sum it up, Rallye Monte-Carlo is about to start the probably most exciting WRC2 year ever. The season consists of 13 rounds. After a pandemic-enforced break, the gravel rallies in Mexico and Chile are back in the calendar. Completely new is the Central Europe Rally. The all-tarmac event starts in Prague, the capitol of the Czech Republic, runs stages in Austria as well and reaches the finish in Passau, a historic city in the very south of Germany.

Rallye Monte-Carlo kicks off on Thursday (19 January) at 6:30 p.m. in front of the Casino. Two special stages in the dark follow including the run-up to the legendary Col de Turini, this year finishing on top of the pass. Twelve stages make up Friday and Saturday, both legs without midday service. Sunday (22 January) will see a further four special stages. In total, the teams have to complete a competitive distance of around 325 kilometres.

Mr. Hrabánek, in 2022 the top three overall finishers of the WRC2 category as well as the WRC2 Junior and WRC2 Masters Champion drove a Škoda. Škoda Motorsport supported team Toksport WRT won the WRC2 Teams’ title. Can your customers repeat this success in 2023?

MH: We have tested the new Škoda Fabia RS Rally2 extensively. It is a completely new vehicle, that takes another step forward in all respects. However, the basic philosophy has not changed compared to its predecessor. Our aim was to once again design an absolutely reliable car, that also takes running costs into account. We have developed the Škoda Fabia RS Rally2 especially with the needs of private teams in mind.

The demand for the Škoda Fabia RS Rally2 is very high. Not all WRC2 teams could yet exchange their trusted Škoda Fabia Rally2 evo for the new car . . .

MH: We are working full-throttle to answer all orders as quickly as possible. We need to be also able to deliver all Škoda Fabia RS Rally2 together with a sufficient spare parts package.

...the “Monte” was first held in 1911, making it the oldest event on the current WRC calendar?

...the rally was originally invented to boost tourism in Monaco even in the less attractive winter months? Up to 1998, the competitors (although in that year the works teams were excluded) drove from starting points all over Europe and even North Africa to a common assembly point in the south of France before the actual rally started.

...the right choice of tyres is extremely difficult and at the same time decisive? Only four types are available: slicks in two different compounds plus snow tyres with and without studs. The crews have to complete up to four special stages without service. During this time they have to rely on the four tyres fitted to the car plus a maximum of two spare wheels. While one special stage may be covered in deep snow, the next may be icy, wet or even dry. As a result, the tyre choice is almost always a compromise.