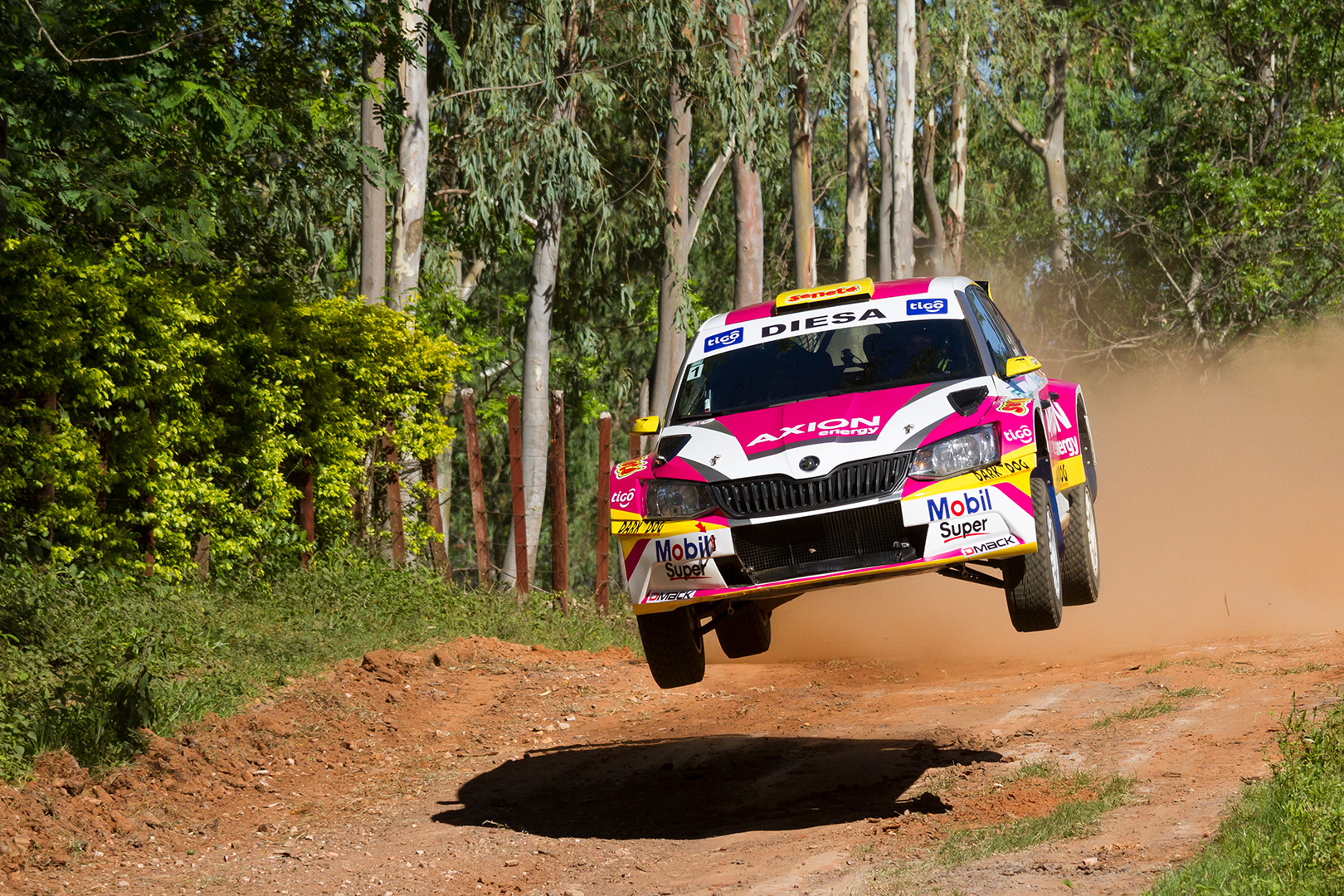 When you think about South American sport, Paraguay isn’t the first country that leaps to mind. But when it comes to rallying, it’s Paraguay that has been the dominant force in recent years, and that’s down in no small part to one driver: Gustavo Saba.

Saba, who is 39 years of age, has completely dominated South American rallying in recent years and most of his successes have come in ŠKODA FABIAs.

Since 2011 he has won the FIA CODASUR (South American) Rally Championship five times; four of which came in a FABIA S2000 or R5. And while Brazil and Argentina might dominate South American football, it is Paraguay which boasts the continent’s most competitive rally championship, and he has won that for the past three years too.

Saba entered both championships again this year, once more driving a FABIA R5 alongside regular co-driver Fernando Mussano. Given his recent form, he was inevitably the man to beat once more. Still, in his home championship, he didn’t have everything his own way.

Actually, his challenge for a fourth consecutive Paraguayan Rally Championship got off to the worst possible start at the Rally del Guairá, where, despite a strong start, he was forced to retire and missed out on vital early points. The victory instead went to rival Diego Dominguez Sr., with fellow FABIA R5 drivers Miguel Zaldivar Sr. and Tiago Weiler finishing second and third respectively.

Next up was the Rally Trans Itapúa, where once again things didn’t go to plan for Saba. A ten-second penalty didn’t help, and Saba finished as runner-up. It was Dominguez Sr. who took his second consecutive win to extend his lead at top of the standings.

It was still early days in the championship though, and Saba is experienced enough not to panic even when early results haven’t gone his way. His focus stayed firmly on the next round, the Rally de Santani, and he was rewarded with his first domestic victory of the season, finishing 35 seconds clear of the field. The result was made even better for Saba by the retirement of Dominguez Sr’s Hyundai i20 R5 – which meant that Saba suddenly found himself joint top of the standings.

It was the same story in the next round, the Rally de La Madera, as Dominguez Sr.’s Hyundai i20 R5 was forced to retire again, this time with a lost wheel, while Saba held off a stern challenge from Alejandro Galanti to take his second consecutive win. It elevated him back to a familiar position at the top of the Championship standings at the halfway point.

Onlookers would have suspected that Saba was well-placed to cruise to yet another Paraguayan title. They would have been underestimating the competitive nature of this Paraguayan championship, however. Dominguez is a multiple champion in his own right and he wasn’t about to give up without a fight.

That became apparent in the fifth round of the season, the Rally de la República Alto Paraná, where rally fans enjoyed a thrilling three-way battle between Dominguez Sr., Saba, and Galanti at the top of the standings. It was Dominguez Sr. who edged it, finishing just 10.2 seconds ahead of Saba with Galanti only 14.5 seconds further back in third place.

It was the same three drivers at the top of the next round, the Rally de Cordillera – Acosta Ñu too, but this time Saba showed all his class to take victory by a margin of 1 minute 47 seconds. Galanti took second place, more than a minute ahead of Dominguez Sr. as Saba’s championship lead increased once more.

The epic 25-stage Transchaco Rally was up next and it quickly became clear that Dominguez Sr. wasn’t giving up without a fight. He took the win, but Saba’s second place ensured that he remained top of the championship standings, with another FABIA R5 driver, Luis Ortega finishing third.

The last round of the championship was the Rally de Carapegua, where, in tough conditions, Dominguez Sr.’s determined challenge would finally come to an end. A third retirement of the season in his Hyundai i20 R5 would ultimately cost him, as Saba put in a composed drive to finish second behind Galanto and ensure a fourth consecutive Paraguayan Rally Championship title was his. Another FABIA R5, driven this time by Luis Maldonado Jr. finished in third place.

Four successive title wins in what is the most competitive domestic championships in the world is no coincidence – and he added yet another CODASUR title to the locker as well.

This is not the story of one driver competing in a car which is much better than all the others, however. There are lots of FABIA R5s being entered into both the Paraguayan and CODASUR championships. Still, it is Saba who is consistently finishing ahead of the pack and who is the undisputed king of rallying in South America right now.