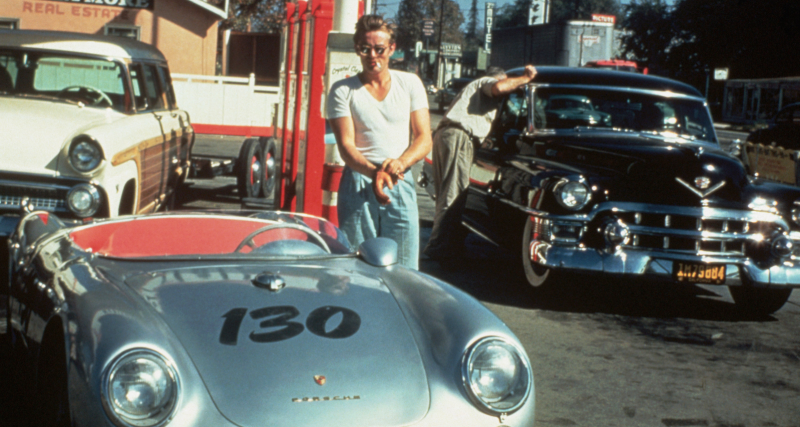 The young and rebellious actor was also a promising racing driver and with a bit more luck, he could become legend behind the wheel as well as in front of the camera.

Unlike Paul Newman, who got into racing quite late in his life, James Dean, the star of East of Eden, Rebel Without a Cause and Giant, had a need for speed since his early years. First money he got for small film roles, he spent on fast motorcycles – a ČZ 125 A from Czechoslovakia, a Royal Enfield and finally a Indian Warrior TT.

After he got to New York and signed a contract with Warner Brothers, his newfound affluence allowed him to move on to four wheels. His first car was a 1953 MG TF, a tiny British sportscar that still looked like a pre-war model. It wasn’t really fast, but it was nimble enough and Dean got his first taste of going fast behind its wheel

It was only after the big success of East of Eden in 1955 when Dean’s passion for speed started getting serious. Like many other sportscar enthusiasts at the time – young Steve McQueen among them – he went straight for the “new kid on the block”, the nimble and nippy Porsche 356.

Like McQueen, he chose the more powerful and lighter 356 Super Speedster, which was the perfect choice for club racing. The first time he took it racing, to Palm Springs in late March 1955, he finished third overall and won the production class.

Even with shooting of his next (and, as we now know, the last) big movie, Giant, Dean did spend a big part of summer of 1955 driving to races, either behind the wheel or his Porsche or towing it behind a Ford wagon he bought for this purpose.

In just a few months, he displayed a real racing talent and it was quite likely that if he went on, he could become one of those actors who have equally impressive racing career on the side. We’ll never know if it would materialize, though.

Soon after his first successes with the Super Speedster, he noticed another Porsche behind the window of Competition Motors, a sportscar dealership in Los Angeles where he now lived. The 550 Spyder was not a sportscar. It was a true, purebred racecar, with lightweight aluminium body over tubular spaceframe and a light but powerful 1,500 cc engine, providing 81 kW (110 hp) at 7,800 rpm. In fact, it was quite similar to ŠKODA 1100 OHC that was built around the same period.

Dean was blown away by the car and it didn’t take long before he traded his trusty 356 Super Speedster in for the new racer. He was going to put it to action at Salinas Road Race on 1stOctober 1955, just ten days after he bought it.

The car was so new that the engine wasn’t even broken in and his mechanic, Rolf Wütherich, suggested they drive the car to Salinas instead of towing it behind Dean’s Ford wagon. They set out on Friday, September 30thand early in the afternoon, both Dean and Bill Hickman, driving the support car, were ticketed for speeding.

Later that day, a Ford Tudor, driven by a college student, drove into an intersection in front of Dean, not noticing his low and fast car. Not having enough time to react, Dean died in the wreck of his Spyder, before his most famous movie, Rebel Without a Cause, was even released.