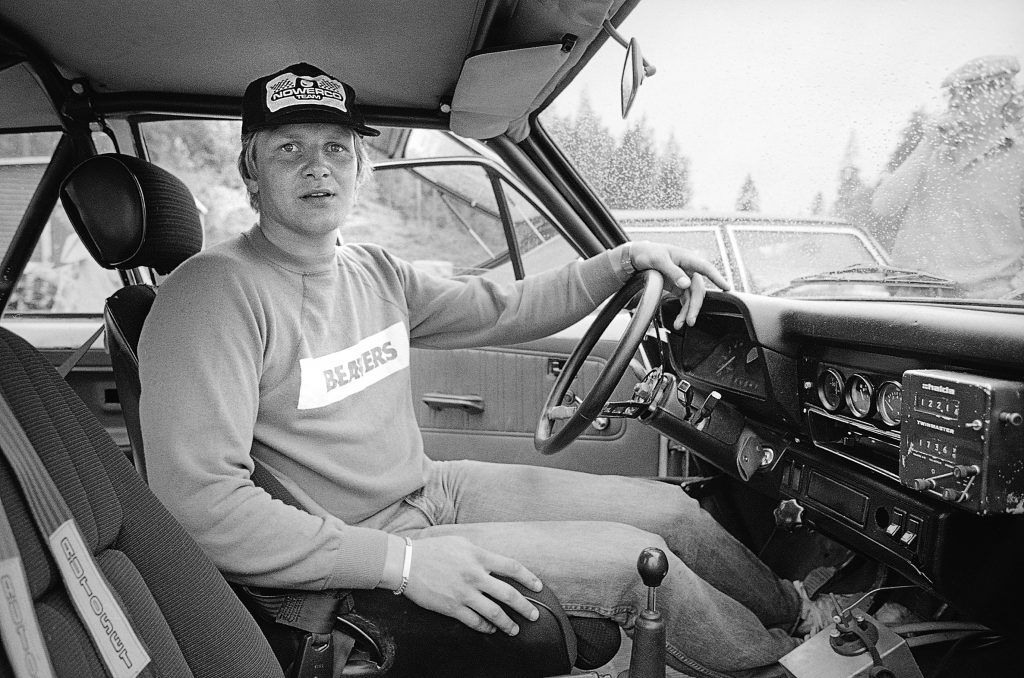 Juha Kankkunen: A Champion and a Record Holder | Legends of Rally

The generation of „fathers founders“ that brought the Finnish rallying the international attention and well-deserved place among the world’s elite, didn’t leave without successors. A younger generation took over after the “Flying Finns” and added innumerable more laurels to the initial Scandinavian successes. Among them, a four-time world champion and holder of many diverse records, Juha Kankkunen.

Juha Matti Pellervo Kankkunen was born on 2ndApril 1959 and, per the local custom on Scandinavian snowy plains, got behind the wheel while still a child. However, it took until his 19 years before he strapped himself into a rally car and started gathering his first successes. It was the year 1978. With the rear-wheel driven Ford Escort RS2000, he gained experience for two more years before switching to Opel Manta GT/E. The German car, though, brought more of technical troubles than anything else.

The very year he signed with Toyota. His fortunes improved and he managed to finish the World Championship season in 19thplace. He used the same car in seasons 1984 and 1985, when it started to be obvious that the young Finn is made of gold. It was the third year at the Toyota works team when he won the Safari Rally, the Kymenlaakson Ralli at his home country, dominated at the Ivory Coast rally and ended up in the fifth place overall, among such names as Stig Blomqvist, Walter Röhrl or Ari Vatanen. Right behind him in sixth place finished Henri Toivonen, whose deadly accident with Lancia Delta S4 at the 1986 Tour de Corse brought about not only a change of attitude towards motorsport, but also the end of the Group B.

It was the Group B where Kankkunen achieved his first world champion title. For the fateful 1986 season, he became a Peugeot works driver, taming a wicked 205 Turbo 16 Evo 2. This second generation was extensively reworked in comparison to the first – it received a tubular frame in the rear, replacing the modified stock (!) chassis of the original model, and the horsepower has risen to 550 hp. Driving this four-wheel drive, just over 900 kg car, he never finished worse than 5thin the 1986 season. He won three times, finished runner-up twice, third once and fith twice. Twice, he didn’t finish and once, he was disqualified. With 118 points, he became the world champion for the first time in his career, joining other Finns who dominated the last year of the Group B, with Markku Alén on Lancia Delta S4 finishing in 2nd, and Kankkunen’s teammate Timo Salonen in third.

Juha Kankkunen was one of the few drivers who masterfully managed the switch from the brutal Group B monsters to more civilized Group A cars. In 1987, he drove a Delta HF 4WD for the Lancia works team and once again, he never finished below the fifth place. He grabbed three wins and three second places. With a hundred points, he secured another World Champion title and helped Lancia to win the Constructor’s Championship far ahead of Audi with their heavy 200 Quattro.

The 1988 season meant a step away from the limelight for Kankkunen. Driving a works Toyota Celica GT-4, he suffered a string of technical problems and one crash, ending the season in 37thplace overall. However, while he wasn’t lucky in rally championship that year, he came to its own at one of the most popular and hardest rally raids in the world. Driving a Peugeot 205 T16, he dominated the Dakar Rally, giving no chance to anyone else. By the way, in the same year, another legend scored his first victory at the Dakar Rally – Karel Loprais from Czechoslovakia dominated the truck class with his Tatra 815.

In 1989, Kankkunen stayed with Toyota. This time, his results with Celica GT-4 were significantly better and he scored the overlal 3rdplace in the championship. The year 1990 meant return to Lancia and third place overall behind the wheel of Delta Integrale 16V.

The following year, both Kankkunen and Lancia could celebrate once again. The Finnish driver scored the 1991 World Champion title, seven points ahead of Carlos Sainz driving a Toyota, followed by another Lancia of Didier Auriol in the third. In 1992, the results looked almost the same, just with Kankkunen and Sainz switching places – Spaniard with Toyota became the champion, while Kankkunen took the silver, ahead of his Lancia teammate Auriol.

For 1993, Juha Kankkunen returned to Toyota to find out whether they could use their previous experiences to win a title after all. At the Rally Acropolis Kankkunen had to retire due to engine failure, but he finished all the other rallies, winning five of them, coming second one, third once and he was fifth at the New Zealand. Behind the wheel of his Celica Turbo 4WD, he drove to his fourth title and 135 points – more than 20 ahead of the Francois Delecour, who finished second with a Ford Escort RS Turbo, and 43 points ahead of Auriol, who switched to Toyota as well.

After this success, Kankkunen stayed with Toyota and its Celica GT-Four for another three seasons – 1994 (3rdplace in championship), 1995 (5thplace) and 1996 (7thplace overall).

Even with the advent of WRC class in rallying, Kankkunen wasn’t going to even think about retiring. Driving a Ford Escort WRC, he finished 4thoverall in the 1997 season, a feat he repeated the next year with the same car. The year 1999 brought once again a switching of factory colours, the Kankkunen’s new vehicle behing Subaru Impreza S5 WRC. At 40 years of age, he once again secured himself a 4thposition overall. In 2000, he took his Subaru to 8thplace overall in WRC.

Juha Kankkunen kept appearing at the world’s rallies through 2010 and always finished in the front. His first start at the WRC circuit was Rally Finland in 2010, where he took his Ford Focus WRC to the 8thplace.

Kankkunen was always among the world’s top rally drivers and in his long and fruitful career (he appeared as a works driver for 19 years non-stop – from 1983 to 2002), he collected 75 podium finishes and won a round number of 700 special stages. He also held, or still holds, several records, both in the world of rally and speed records. At the time, his four WRC championships were one of them, as were 23 won WRC events. And to this day, no one else managed to become a World Champion on three different makes of cars.

In the winter of 2011, Kankkunen became world record holder in ice driving. Driving a Bentley Continental Supersports, he drove through a timed section on the ice-covered Baltic sea in both direction, averaging 330.695 km/h. It should be added that the record Bentley was a convertible… because even on the frozen sea surface, the style is what matters! He never got to the record books, though, because a month later, he was beaten by an Audi RS6 by just one kilometre.

He held another record for a longer period of time, though. Until last year, he was officially the fastest tractor driver in the world. With a 250 hp, 1,000 Nm Veltra T234 tractor, he reached 130.165 km/h on 19thFebruary 2015. The record stood until March 2018, when “The Stig” sat behind the wheel of a tractor equipped with a modified Chevy Small Block V8 and accelerated the orange (a colour from Lamborghini catalogue, because “the colour makes the tractor”) monster to 147.92 km/h. The rules require driving both ways, though, and the silent racer wasn’t as successful driving in the opposite direction. Even so, with the average of 140.44 km/h, the new Guiness book record went to the BBC’s show. But maybe, it will stay with “Flying Finns” even this time – no one knows, yet, who is The Stig this time.