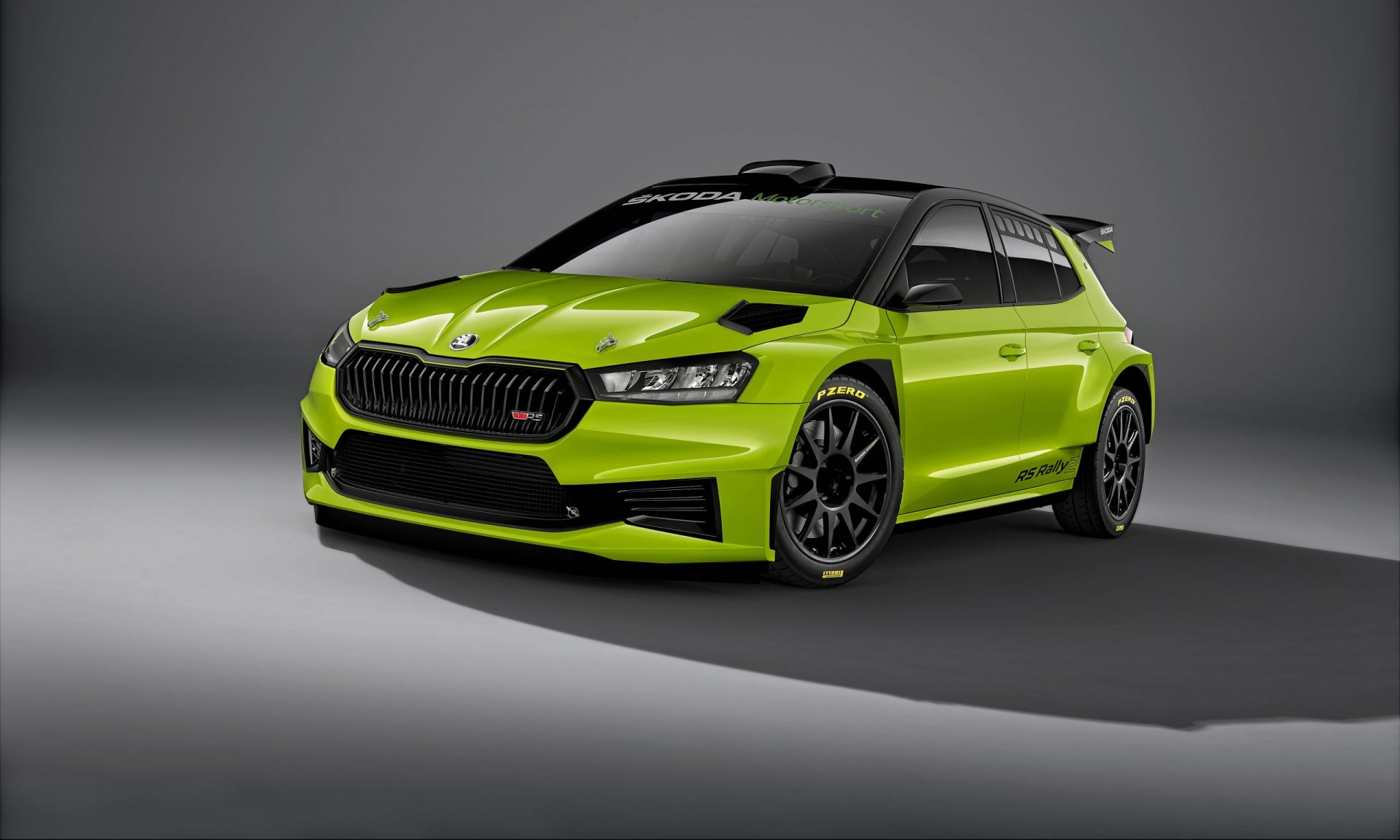 Škoda Motorsport has opened a new chapter in its successful presence in the world of rallying. After months of development and extensive testing has Škoda Motorsport introduced the all-new Škoda Fabia RS Rally2. Let's introduce this new car together.

“Standing still means going backwards, and this is especially true in motorsport. That’s why, in developing the new Fabia RS Rally2, we applied the experience we gained from the predecessor model and optimised every detail. The aim was to improve the most successful rally car in the world. I’m proud of the entire Škoda Motorsport team who have pursued this goal with great dedication. I would also like to thank our colleagues in Series Development; the fourth-generation Fabia provided us with a perfect basis for the Fabia RS Rally2,“ said Michal Hrabánek, Head of Škoda Motorsport.

The new car belongs to the Rally2 group and follows the extremely successful Škoda Fabia Rally2 and Rally2 evo, which have both become the best-selling rally specials over the past eight years with more than 450 sales; the best-selling and also the most successful. Thanks to an extensive customer program, Škoda Motorsport and private teams have managed to achieve an impressive 1,710 victories (by 30th April 2022) and 12 world championship titles in driver or team categories with these cars.

And what do we already know about the Škoda Fabia RS Rally2?

The new generation of the Škoda Fabia RS Rally2 is based on the new Škoda Fabia road car, which entered the market in 2021. As it is also a Rally2 car, the new rally special has to comply with the FIA regulations for this group just like its predecessor. This means that it is powered by a 1.6 litres turbo petrol engine connected to a five-speed sequential gearbox and four-wheel drive with mechanical self-locking differentials on both axles. The rally engine is based on the 2.0 TSI from the EA888 engine series with an output of around 214 kW (289 hp) and the maximum 430-Nm torque.

Škoda Motorsport involved engineers, technicians, mechanics and drivers with many years of experience in the test programme. Andreas Mikkelsen, Jan Kopecký, Kris Meeke and Emil Lindholm got behind the wheel of the test car. The entire team then tested the new car in as many different conditions as possible to ensure that it was truly ready for anything it might have to face. And that's what matters most to customer teams around the world; being able to rely on a car that can handle the freezing conditions of Finland, the fast and smooth asphalt of Spain or the extremely broken gravel of Fontjoncouse.

Testing in the land of snow and ice
During the winter test in Finland, crews were faced with snowy forest roads and temperatures dropping to -14 degrees Celsius. “The goal was not only to test the durability and performance of for example chassis parts and powertrain components under these harsh winter conditions. We also had to make sure, that the crew finds an acceptable comfort level inside the cockpit when it’s freezing outside. For example, the windscreen must not fog up and the onboard temperature must not fall below a certain level,” explained Jan Krasula, the project leader for the development of the Škoda Fabia RS Rally2.

Next level of safety
But Škoda Motorsport did not just focus on the comfort of the crew, but, above all, on their safety. The chassis of the new generation Fabia road car, based on the MQB-A0 platform from the Volkswagen Group, has made this possible. The main goal was to significantly increase side impact safety, which was achieved through the seat mountings, roll cage door cross and door panels. A total of six layers of carbon fibre and Kevlar seal the foam in the direction of the cockpit to protect the crew from sharp fragments. “The durability of the newly developed bodyshell is on a different level compared to our current rally car,” emphasised Tomáš Karniš, Safety Engineer at Škoda Motorsport.

Top aerodynamics
Another important area that the Škoda Motorsport technicians and engineers, together with their colleagues from Škoda Technical Development, focused on was the car's aerodynamics. “We gave aerodynamics even more attention than we had already done with the current rally car. The main development target was higher downforce, at the same time enhancing the overall aerodynamic efficiency of the car, “ said Lukáš Vojík from Škoda Auto Technical Development, Aerodynamics Department. Two key points were the completely new rear wing and the cleaned-up air flow over the roof area. Thanks to this, the Škoda Fabia RS Rally2 achieves twice the downforce of the current rally car.

Perfect balance
During development, attention was also focused on the balance of the car. The longer wheelbase and overall larger dimensions gave the engineers new options to position the car’s main components. “To make the most out of this layout, we have started from scratch compared to the previous Škoda Fabia Rally2. For example, we were able to re-position the fuel tank. In the engine compartment, we took advantage of the larger space between the chassis rails. We have redesigned the gearbox, clutch and flywheel as well in order to achieve less inertia and more efficiency. Also, the new generation Škoda Fabia Rally2 gets a bigger and more efficient intercooler, which would not have fit under the current car’s bonnet,” Jan Krasula summarized it for us, the project leader for the development of the Škoda Fabia RS Rally2.

Durability as a key factor
But what hasn't changed with the new car is its durability. That's what customers appreciate about the Škoda Fabia Rally2 evo, as they can rely on it even in the toughest conditions. “This is the golden rule: To finish first, you first have to finish at all. A reliable rally car gives drivers the confidence to push to the limit. The reliability of the cars is part of our DNA. With each new model, we put a lot of energy in securing a high level of reliability,” said Aleš Rada Head of Racing Car Development at Škoda Motorsport. Testing of the new car also took place on the tracks in Fontjoncouse, France, which are also used by the teams during their preparations for the Dakar Rally. “The tracks of Fontjoncouse are very, very rough. You have some big compressions, jumps, lots of stones on the road – it’s the best environment to test the reliability of a rally car. If a car survives Fontjoncouse, it can stand every proper rally,” test driver Andreas Mikkelsen summed it all up.

Did you miss the live broadcast of the Škoda Fabia RS Rally2 World Premiere? You can see the full footage in the video below or watch a short clip here.

To find out more about the Škoda Fabia RS Rally2, read the Press Kit on the Škoda Storyboard.