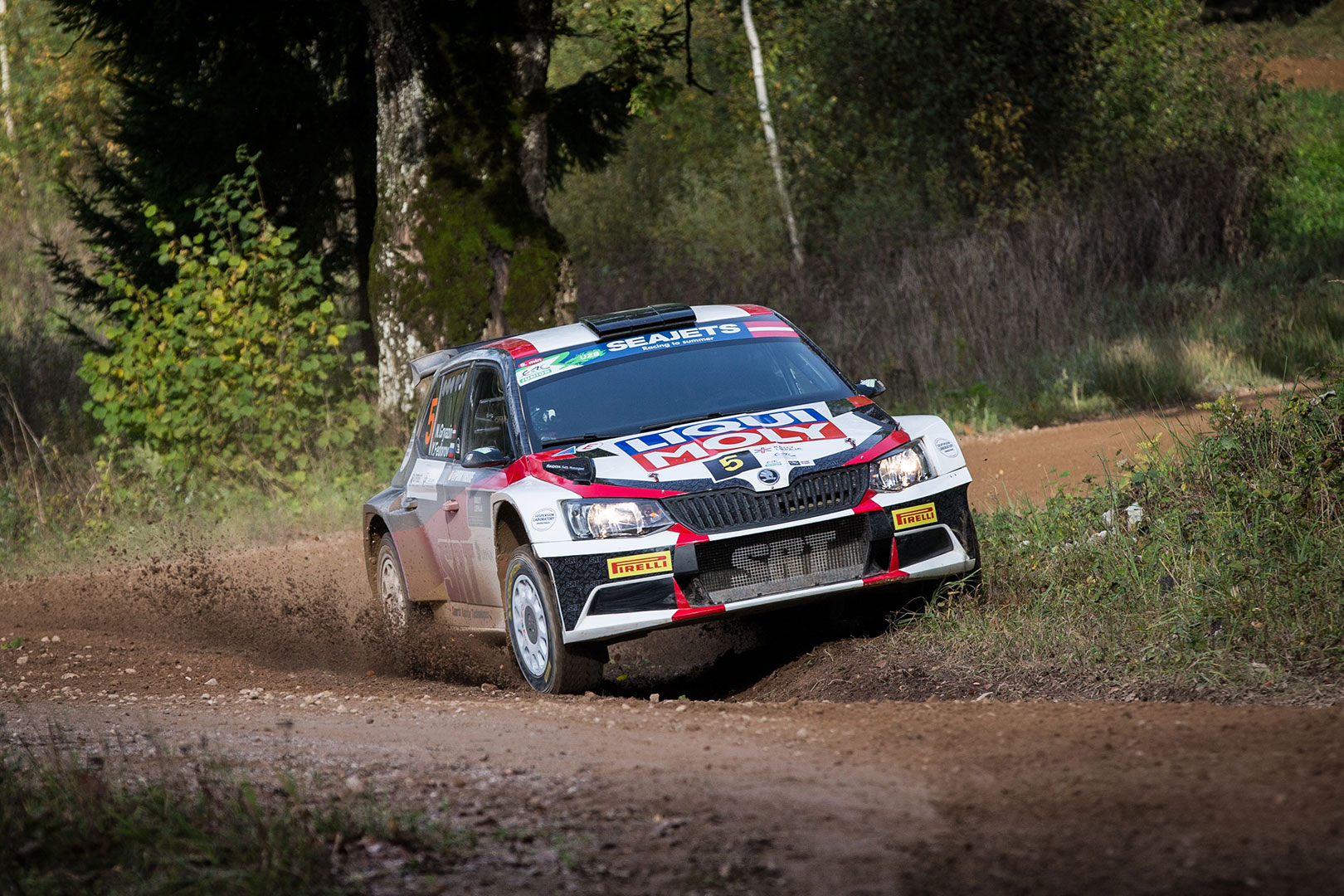 Last season, there was only one way for Nikolay Gryazin to improve on his 2017 result in the Junior U28 championship – winning the whole thing. Which is what he did. Now, the 21-year-old Russian driver has set his sights much higher, entering the WRC 2 championship to try his skills in the world arena. Looking at his results from the first two rounds he attended, it seems that Gryazin is not going to stay behind. In his first ever outing on World Rally Championship circuit, he finished 5th in WRC 2 at Rally Sweden. Recently in Corsica, he went for silver.

Those are some real achievements for a young driver, and we can’t wait to see where his career will go next. One thing is certain, Nikolay Gryazin, his co-driver Yaroslav Fedorov and their ŠKODA FABIA R5 are a force to be reckoned with! To find out more about his plans and ambitions, as well as his thoughts about recent rally rounds, we asked Nikolay a few questions.

Let’s start with your latest success at Tour de Corse. It was just your second appearance in WRC 2 and you already finished on the podium. How does it feel?
Feels great, thanks! The race was very difficult and we were surprised to even finish, let alone score a second place.

What was the hardest moment at Corsica?
I think the whole second day of the race was hard for us. All of the stages were difficult, but the 47-kilometre-long Castagniccia was especially tricky. It was very difficult to find the right rhythm, avoid mistakes and post a good time.

And, on the contrary, what was the best one?
Awareness of the finish line. Although we wanted to continue our fight for the first place, we were also just glad of the fact that we were getting to the finish of a legendary and difficult rally.

With works teams moving to WRC 2 Pro, it becomes a bit easier for privateers to fight for the top positions. What are your ambitions for your first year in WRC 2?
Our goal for the first year is to get acquainted with the tracks and understand how to drive them. I personally try not to think about the championship. My task is to work well in preparation and during each race.

And what are your ambitions for the future? Where do you see yourself in five or ten years?
Ambition for the future is to get into a factory WRC team and to improve my professional driving skills to the best of my ability.

Many rally drivers start with racing and driving overall very young. What was your first time behind the wheel, and what was your first competition?
I started out in karting at the age of 15. Then I went to the Russian Cup karting and after that, I drove in the Russian circuit racing championship until I was 16. At age 17, I drove my first serious rally in Latvia – Rally Aluksne.

What do you think of the FABIA R5? What are the main reasons you decided on this car?
The main reason for our choice is reliability. The car is very reliable, which allows me to develop as a professional driver without worrying about the competitiveness of the car. Plus, at the moment the car is one of the best in the R5 category and with many new manufacturers now beginning to produce R5 cars, I am comfortable knowing that ŠKODA will continue to test and develop the FABIA, ensuring it is always at the pinnacle of performance and reliability.

You’re 21, so you certainly belong to the video game generation. Did rally simulators have any effect on your decision to go into rallying? Do you still play any?
I have played a lot in flight simulators. In the beginning, rally did not really appeal to me. However, after I started driving in reality, I had to change the flying cockpit to a racing steering wheel! To this day, I still drive in rally simulators and spend quite a lot of time with them.

Did you have any role model among rally or racing drivers?
Ott Tanak. For me, he is the best example of a real athlete who is continually working hard on his success, he is resilient despite the ups and downs.

Even though many people don’t realize this, rally drivers have to stay in great shape. What do you do to stay fit?
Due to the fact that we spend lots of time on tests, it is not always possible to go to the gym regularly. Therefore, I have an exercise program that can be done at home, in the hotel during tests or wherever I find myself. I combine this with running.

For how long have you been driving with your co-driver, Yaroslav Fedorov? What kind of relationship do you have – are you friends outside the rally track as well?
Yaroslav and I have been together from the beginning of my rally career and we are great friends. Unfortunately, he lives far away from me, and we only meet in training and racing. But that’s ok – it gives us an opportunity to relax from each other…

How did you celebrate your success at Corsica?
We didn’t celebrate. In the morning we had to fly home. After each race, we analyze what was good and what was bad – that is our “celebration”!

What kind of driver are you on the road? Do you drive fast in a civilan car as well?
When I got my driving licence, I was already a racing driver. Therefore, I understood what the dangers are on the roads, so I don’t drive fast on the roads and in the city.