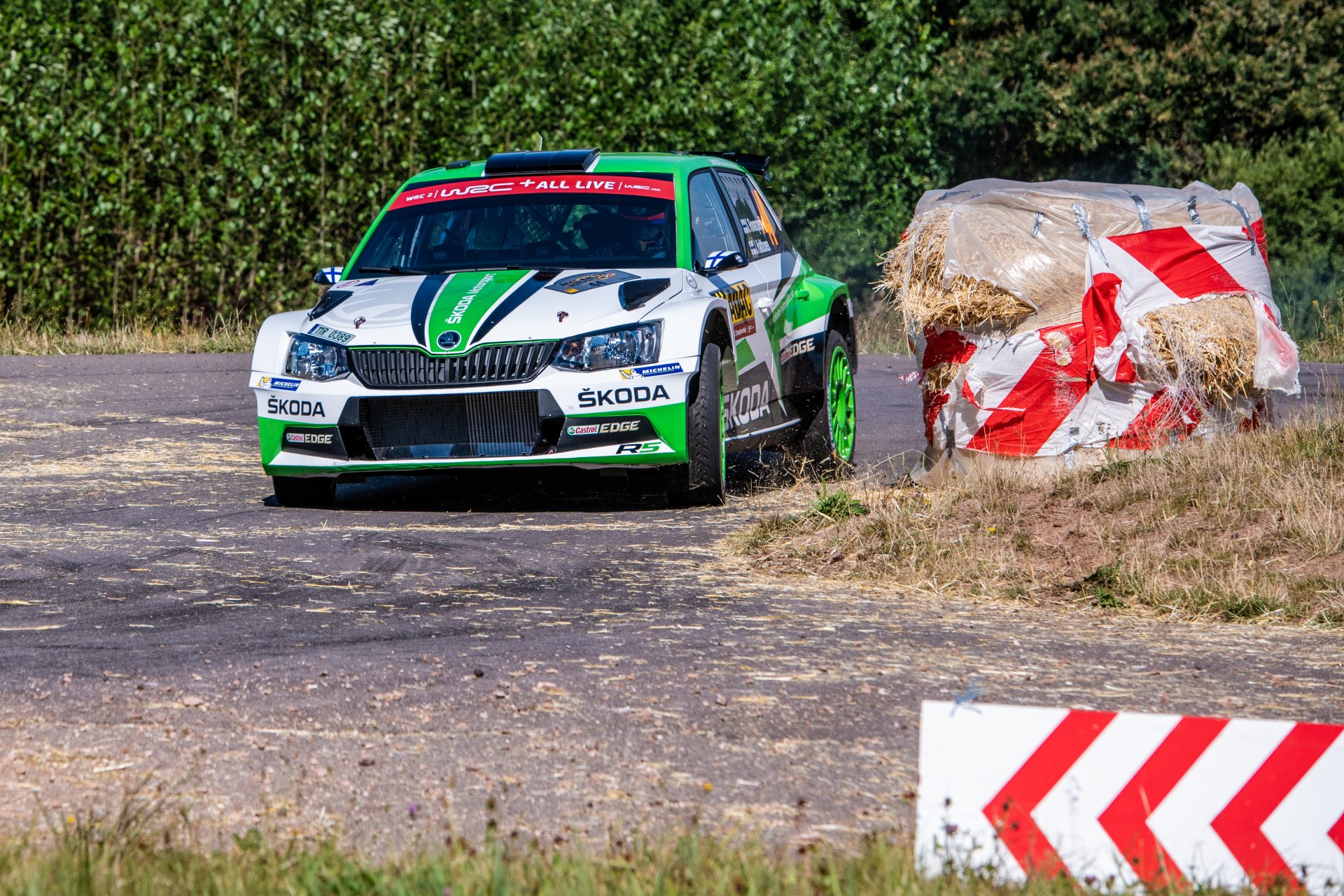 This year’s Rally Deutschland is on! It takes the crews through vineyards around the river Mosel in Germany and through the military training grounds. Find the latest news and results of the rally in this article. Keep watching us and you won’t miss out on anything important!

The shakedown for Rally Deutschland took place on a 5,60 kilometre long stretch of extremely narrow country roads in ST. Wendeler Land. The ŠKODA drivers made a great start to this important WRC 2 event. Jan Kopecký with his co-driver Pavel Dresler posted a set of remarkably consistent times: their best was 3:05.2 in the second run – enough for second place in the WRC 2 class. Kalle Rovanperä with Jonne Halttunen had a bit of a rough start when they left the road in the first run and lost around half a minute. However, they managed to recover and took third place with a time of 3:05.8.

The evening stage in St. Wendell was a real crowd pleaser, with tens of thousands of fans cheering around the track. On the slow, technical circuit, the power of the WRC cars was much less of an advantage than usual. Both ŠKODA factory drivers, as well as their teammate O.C. Veiby, who drove a car entered by the team Printsport Oy, proved that point by placing at the top of the overall classification.

First place belonged to Ott Tänak, driving a works Toyota Yaris WRC, but Kalle Rovanperä was just a tenth of a second slower, with a time of 2:11.3, taking overall second place and leading the WRC 2 category.

With the 1-2-3 positions after the first day, the factory team – and, of course, O.C. behind the wheel of a Printsport FABIA R5 – have great hopes for the next stages of the rally, which will take them into wine country.

“It was a lot of fun to drive our ŠKODA FABIA R5 on these narrow streets, but the real rally will start tomorrow”, concluded Jan Kopecký on the first day.

The “real rally”, as Jan Kopecký described it, begun on Friday morning in the vineyards around the river Mosel. The crews were welcomed by sunny weather in the first stage, where Kopecký once again cemented his reputation of a great tarmac driver and stormed into the lead, while Kalle Rovanperä took more cautious approach and finished sixth.

In SS3, the second stage of the day, it started to rain. “Ten kilometres after the start of the stage, it began to rain heavily. There was standing water on some places”, reported Jan Kopecký. Still, he managed to keep his first place overall, although his lead shrinked to 1.3 seconds.

Kalle, who’s got a higher starting number and set off to the stage much later, was strongly affected by the rainfall, lost valuable time and dropped to the eighth position. “We could have gone much faster, but we took it cautious”, resumed the young Fin. With the fastest time in SS4, the last stage of the morning, he moved up to the seventh place in the WRC 2 overall standings.

After the midday service break, the crews took on the same set of stages as in the morning. This time, even though the forecast warned that more rain will come, the sky remained clear and the roads dry. Jan Kopecký made a full use of the great conditions and managed to win all three stages, increasing his lead to 22 seconds.

His young teammate Kalle Rovanperä kept his clever, careful pace and finished the day in fifth position overall, with podium still within reach.

Saturday’s focus will be the eight special stages set mainly in the military area of Baumholder and the famous “Panzerplatte”.

Saturday morning started with famed and feared stages in the military area of Baumholder, the famous “Panzerplatte”. With rough tarmac roads, lined with concrete block – infamous “Hinkelsteins” – that are really unforgiving to any cars that goes off the track, the stages present one of the biggest challenges of the whole rally.

Jan Kopecký had a great start into the day, with another fastest time in the morning. However, his luck ran out in the second stage of the day, SS9 “Panzerplatte I”, where he suffered a puncture and had to change the tyre. Even though Kopecký and his co-driver Pavel Dresler managed the tyre change in a record breaking time, they still lost around 1 minute and 40 seconds, which resulted in dropto 9thposition.

“Suddenly I realized that we have a flat tyre and we immediately stopped to change it”, commented Kopecký.

From there on, it was a race to catch up for the Czech Champion. In the two remaning stages before the midday service halt, he set two fastest times and moved up to eighth position, while Kalle Rovanperä continued his careful run, moving up to 4thposition.

“We didn’t risk anything on our first run in Baumholder”, said the Finnish youngster during the midday halt.

After the service break, Jan Kopecký started his race to erase the 1:08.2 gap to the lead that he collected after the puncture in SS9. And his pace was mind blowing. In the first stage of the afternoon, the short “Arena Panzerplatte II”, he scored a clean victory. Then, the most important stage of the afternoon, the repetition of the “Panzerplatte” stage where he suffered the puncture in the morning, was on the schedule.

“We just need to focus now on our own performance, which has to be perfect”, emphasized Kopecký before he set off to the 38.57 km long stage. And he obviously focused well, as he narrowed the gap by almost 20 seconds, moving up to 6thplace.

With two more fastest times in the remaining stages of the day, he moved up to the third position, while his young teammate Kalle Rovanperä sensationally took the lead. While the afternoon was very successful for the ŠKODA crews, their competitors suffered from mistakes or technical issues.

ŠKODA Motorsport boss Michal Hrabánek was happy at the end of a spectacular Saturday: “What a day! At their first pure tarmac event for our factory team, Kalle and Jonne impressed me with their speed and cleverness, which brought them into the lead. Jan and Pavel fought back after their bad luck with the puncture and proved a great moral and their pure speed on tarmac.”

Sunday morning started with Kopecký setting the fastest time once again, reducing the gap to Fabio Andolfi, who drives a FABIA R5 of the ACI Italia private team, to just 0.1 seconds. Kalle Rovanperä took the second best time and defending his lead – for the time being.

Then came the penultimate stage of the whole rally, where Kopecký posted another fastest time. This was not only enough to overtake Andolfi, but also to grab the lead from his teammate Rovanperä.

“Jan is pushing like hell, he is going for the championship, while I just drive my own pace”, the young Finn confessed.

With another fastest time in the final stage, Kopecký secured a well-deserved win and put himself into the championship lead ahead of his teammate Pontus Tidemand, who has skipped the Rally Deutschland this time.

A faultless, fast drive took ŠKODA youngster Kalle Rovanperä and his co-driver Jonne Halttunen to a sensational second place. They were followed by Fabio Andolfi and Emanuele Inglesi from the ACI Italia private team, and Fabian Kreim with co-driver Frank Christian from ŠKODA AUTO Deutschland, who have delivered an impressive performance on their home event and finished fourth.

ŠKODA Motorsport boss Michal Hrabánek is already looking forward to the coming events: “After their impressive victory here in Germany, Jan and Pavel will have an open title fight with Pontus and his co-driver Jonas Andersson on the next FIA World Championship Rally in Turkey. Kalle and Jonne drove a fantastic and absolutely faultless rally!”