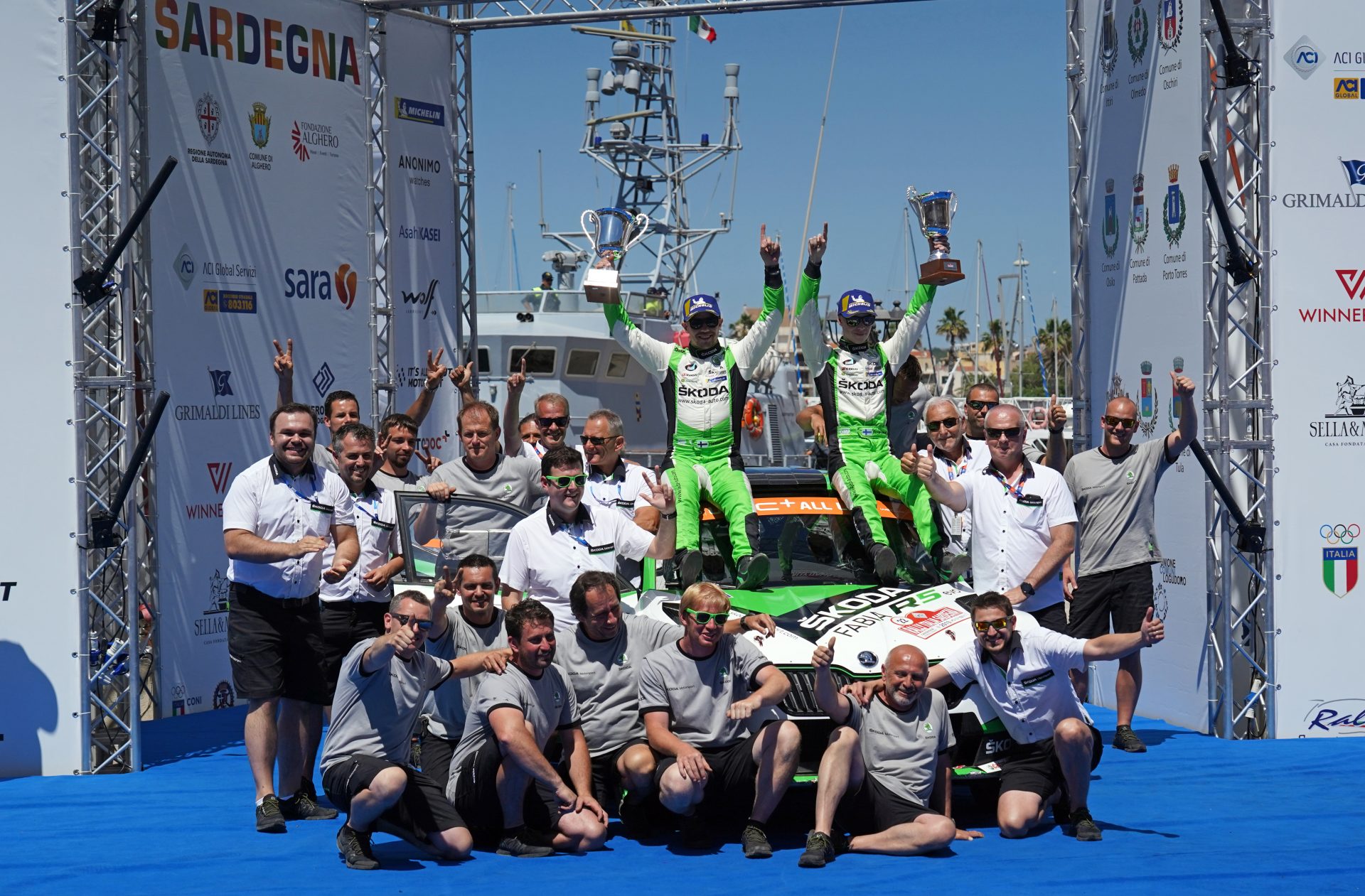 After a successful premiere of the modernized ŠKODA FABIA R5 evo on Rally de Portugal, there is another big challenge ahead of ŠKODA Motorsport – and another rally that’s remarkable for its rough conditions. On a well-known tracks, Jan Kopecký and Pavel Dresler will fight to defend their last year’s victory, while Kalle Rovanperä and Jonne Halttunen will strive to follow up on their first place from Portugal.

Here, you can watch the current news and results over the course of the whole weekend. The content will be continually updated until Sunday. Read more about the background of Rally Italia Sardegna and challenges ahead of the teams in our summary.

Even though the times from the Thursday’s shakedown do not count into the rally results, it’s always interesting to watch how confident the crews are going into the rally. As ŠKODA Motorsport was quite satisfied with the set-up of FABIA R5 evo in Portugal and the conditions on Sardinia will be similar, it was mostly about drivers and co-drivers getting their pace right. The fastest in RC2 was Kalle Rovanperä, who stormed through the shakedown’s track in 3:07.8. Four tenths behind him was Mads Ostberg, followed by Jan Kopecký in the third place.

The rally begun with the Thursday evening’s super special stage, which packed a lot of visual drama for spectators in its 2 kilometres. Nikolay Gryazin on FABIA R5 was the fastest, 0.2 seconds ahead of Simone Tempestini. Kalle Rovanperä finished third with a 0.9 seconds loss to Gryazin, followed by Mads Ostberg and Jan Kopecký.

The first run of the Friday’s four stages proved to be challenging for crews and cars alike. Cars were sliding around on the sandy tracks and many teams were struggling with their choice of car settings or tyres. Right from the start, ŠKODA Motorsport crews proved their speed, with Kalle Rovanperä winning the first stage and Jan Kopecký placing fourth in the RC2 class.

For Kalle, who is in Sardinia for the first time, the conditions were really difficult. “I don’t have any experience of these conditions so it’s really hard to know if I am going fast or slow!“, he confessed after the first stage, before finding out he actually topped his class. In the following stages, he managed to constantly place in the top 10 of the RC2 class and, even more importantly, keep a great standing in the overall classification, finishing the morning’s leg in the 3rd place of RC2 class and second in WRC 2 Pro.

His teammate Jan Kopecký kept up careful pace, not wanting to make any mistakes and saving the car for the afternoon run. Like others, he was fighting the scorching heat: “It’s like driving in a sauna, in the morning, we had temperatures around 39 degrees outside – and in the car it was even much hotter!” Still, he managed to post some great times, eventually finishing the morning’s leg in second place of the RC2 class, 9.7 seconds behind leading Pierre-Louis Loubet (also on FABIA R5) and first in WRC 2 Pro. This means a double lead for ŠKODA FABIA R5 evo in the WRC 2 Pro.

The afternoon run of the Friday’s four stages was about a fight between the two ŠKODA Motorsport works drivers. Kalle Rovanperä once again posted the fastest time of all RC2 cars – and thus also the WRC 2 Pro category – in the first stage. In the rest of the afternoon, he had less success and his only big score was the second place in the second test of the day, the SS7. Still, his consistent speed was enough for him to replace his teammate Jan Kopecký at the top of WRC 2 Pro.

„It has been better this afternoon. Now the car feels right and I enjoyed the driving“, the young Finn commented about his performance.

His teammate Jan Kopecký had some problems with overheating engine in SS6, but they later went away and Jan Kopecký added the second place in the day’s last stage, Monte Baranta, to his two 3rd places from early afternoon. In the overall standings, he moved to the second place in WRC 2 Pro, just 0.6 seconds behind his teammate. Both FABIA R5 evo cars are holding the double in WRC 2 Pro. Overall, 7 out of 10 top places are held by FABIA R5s.

Right after finishing the afternoon run, both drivers and the team were already thinking about ways to improve their performance for the next day. “We changed some parts in the car – at least now we know that in the first loop the setup needs to be much softer to have good grip. For tomorrow, we have to figure something out to get more grip in the second pass“, said Kalle Rovanperä about the plans for the near future.

The Saturday’s leg begun early for the crews – they had to rise at 5:20 AM. Just three stages, run once in the morning and second time in the afternoon, were awaiting them, but they were some really long once. The second and third stage of the day, Monti di Ala and Monte Lerno, were almost 30 km long.

The team worked hard to improve the cars’ setting compared to the previous day. “We made a lot of set up changes to the car so now it is a bit softer which gives us more traction”, said Kalle Rovanperä. The work apparently paid off, as the young driver increased the lead on his teammate from 0.6 to 5.5 and, in the second stage of the day, even moved up to the lead of the RC2 overall classification.

Jan Kopecký focused on giving a consistent performance and keeping his second place, which means a double for ŠKODA in WRC 2 Pro. “We should not make any mistakes and we want to get to the finish with first and second place for SKODA in the category”, he commented on the team’s strategy.

Private driver Pierre-Louis Loubet on another ŠKODA FABIA R5 is in the lead of the WRC 2 category. Overall, six FABIA R5s are in the top ten.

ŠKODA Motorsport kept up the great work in the second run of the Saturday’s stages. Kalle Rovanperä placed third among the RC2 cars in two stages and second in another, while Kopecký took second, fourth and third place. The result is that both ŠKODA FABIA R5 evo crews are keeping the double lead of the WRC 2 Pro and now also in the whole RC2 class.

At the same time, Kalle increased his lead on his teammate to 26.2 seconds. He’s almost 10 minutes ahead of Mads Ostberg, who is third in WRC 2 Pro standings.

“It was a good day. We got a lot of new experiences and the second loop wasn’t as bad as we were expecting. It was enjoyable to drive“, said Kalle Rovanperä.

For the last day of Rally Italia Sardegna, only two runs of two stages were left on the schedule. Both ŠKODA Motorsport crews with ŠKODA FABIA R5 evo competition cars took a safe, consistent pace this time. With large lead against competitors both in WRC 2 Pro and the whole RC2 class, there was no point in risking the flat-out pace.

Even so, both crews – Kalle Rovanperä/Jonne Halttunen and Jan Kopecký/Pavel Dresler – managed not only to keep their lead, but even increase it. Rovanperä arrived to the finish of the scenic Argentiera Power Stage on the island’s coast 24,6 seconds faster than Jan Kopecký and 2:48.4 ahead of Pierre-Louis Loubet, who managed to bring his FABIA R5 to the finish in third. Next in line was Kajetan Kajetanowicz on another ŠKODA. Altogether, six FABIA R5s finished in the top ten.

“This is one of the hardest events that I have done. There were really good things we learnt about our driving, our pace notes and also about the car. Thanks to the team – great job”, said Rovanperä in the finish of the last stage. His teammate Kopecký added: “It’s really great – congratulations to the team, because they again prepared a really perfect car.”

ŠKODA Motorsport boss Michal Hrabánek said: “I am proud and happy about the great teamwork of our crews bringing this result home and making us lead the championship. We are delighted that our new ŠKODA FABIA R5 evo worked like a Swiss watch again. I would like to personally thank everybody at ŠKODA and ŠKODA Motorsport who made this success happen.”

Even after this success, the team is not sleeping on their laurels and starts the preparations for the upcoming Rally Finland.