On Wednesday 10th June, the first drivers set out to the stages of virtual Rally Spain, held by ŠKODA Motorsport with the support of the customer team drivers in the DiRT Rally 2.0. Like on the previous Rally Australia, the motorsport fans will be able to compare their skills with Oliver Solberg and Miko Marczyk, who are this time joined by José Suárez. The drivers’ impressions and details about the rally, including the description of each stage, can be found our recent article ŠKODA Motorsport eChallenge Heads to Spanish Tarmac.

In this article, we will regularly bring you information about the fastest times, results of the pro drivers and their main competitors and other news.

For every big rally, the ŠKODA Motorsport engineers prepare a recommended setup for the customer teams, which individual drivers can then fine-tune to suit their preferences. ŠKODA Motorsport eChallenge drivers receive the same service. In Spain, they will also face one stage in the rain (the final SS8, run after the last service), two setups were created, one for dry and one for wet tarmac.

The DiRT Rally 2.0 is a very realistic simulation, so the recommended setup is not that far from the real one and build on the real rally experience of ŠKODA Motorsport. However, a lot of values and ranges differ and there are no limits to the players’ invention. 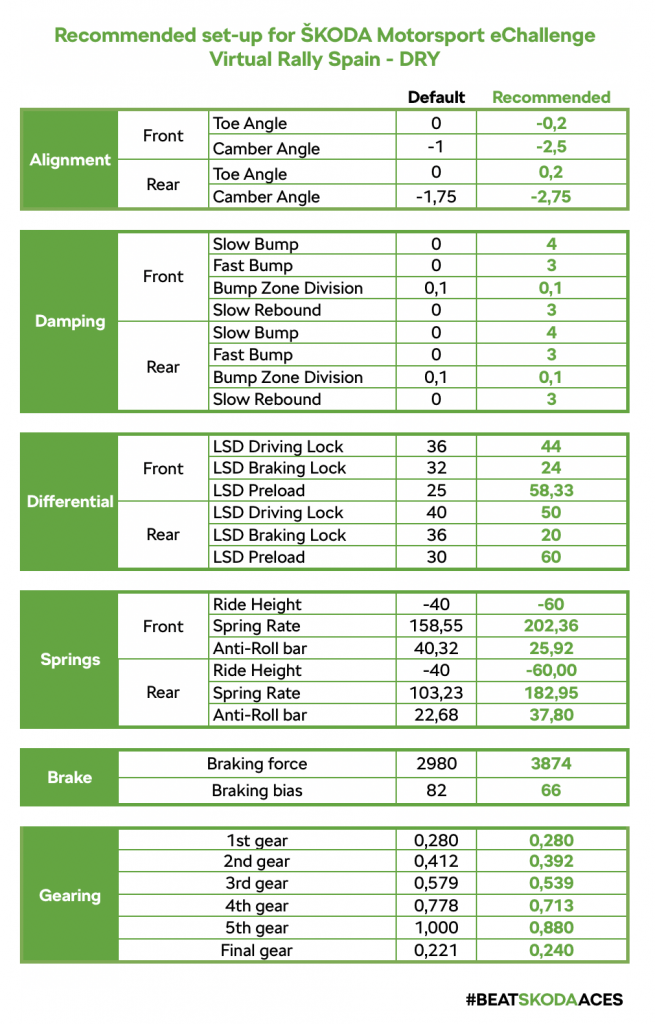 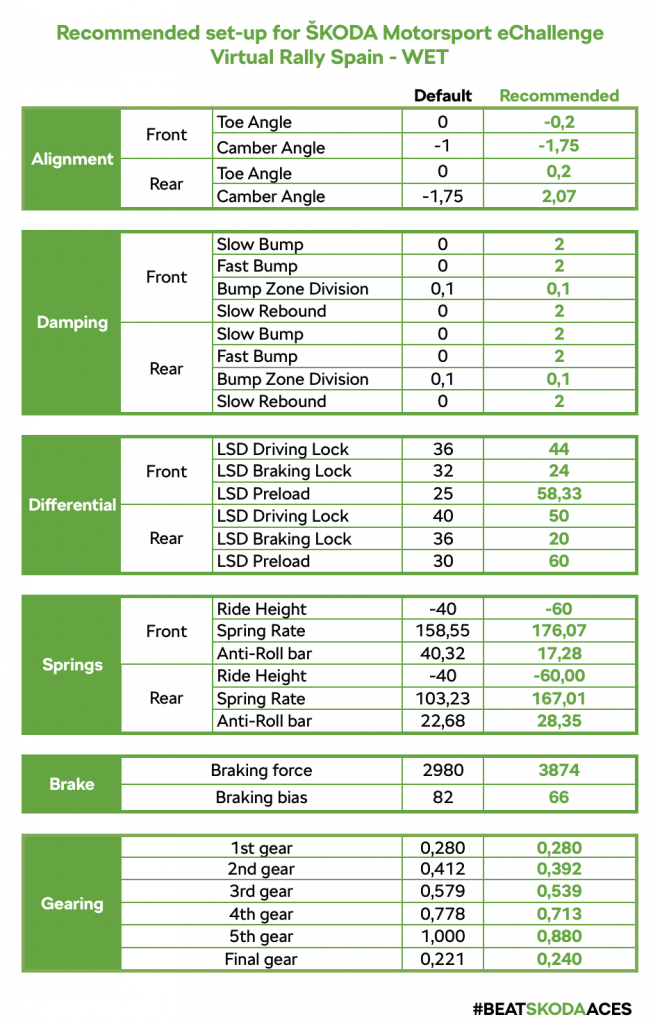 During Friday, more than 4,500 members of the SKODA eChallenge club were ready to take part in a dramatic tarmac race in Spain. The first three places were soon taken by old acquaintances from the previous two rounds – Jonathan Shaeffer, Luca Giacomin and Crazynevada. And even in the same order as before in Australia.

Although Giacomin won five special stages out of a total of eight, he was unable to make up for several mistakes in SS3 and SS4. Overall, he is currently second with a gap of less than 2.5 seconds on Schaeffer.

The fast Austalian praised the diversity of the special stages and shared a few driving tips: „Stiffen the suspension and roll bars – but keep the default ride height as you need the clearance for the edge of the road. Make sure you're driving very smooth with the soft slick tyre on the wet road-any sliding will cost you a lot of time – I lost a lot of time sliding on SS3. It was a great rally in Spain with flowing roads and a great challenge with dry and wet conditions mixed challenging tyre choice,“ said Giacomin.

Update 3: A weekend full of twists

The weekend was all about the fight for the top positions. One of the ŠKODA Motorsport ambassadors, Miko Marczyk from Poland, beat the familiar trio of virtual racers who have stayed at the top in the last two rounds. He finished almost six seconds ahead of the Frenchman Jonathan Schaeffer, making the most of his dedicated training and go-kart experience.

„I trained hard for the third round of the eChallenge in Spain. I know that I'm competitive on tarmac, so I was quite confident. I even drove without a spare wheel for the whole time. Up until SS7, where I got 10-second penalisation for starting too soon, it was a clean drive without any errors. SS3 was also a hard one, as it was driven in the wet, dark and on quite worn tyres. I ended up first overall, which makes me very happy as I found out that on tarmac, I can beat drivers who are much faster on gravel,“ described Marczyk.

Unfortunately, even Miko could not hold on to his first place. Late on Sunday afternoon, he was beaten by Spaniard Will Febrer. Even if the Pole had not received the 10-second penalisation in SS3, he would have been roughly two seconds too slow for victory. Before midnight on Sunday, 4,704 players had entered the ŠKODA eChallenge. This means another increase in the overall number of contestants.

Now, ŠKODA Motorsport is slowly returning to the real-life rally stages and will be focussing its attention there. But motorsport fans can expect more eSports activities in the future.