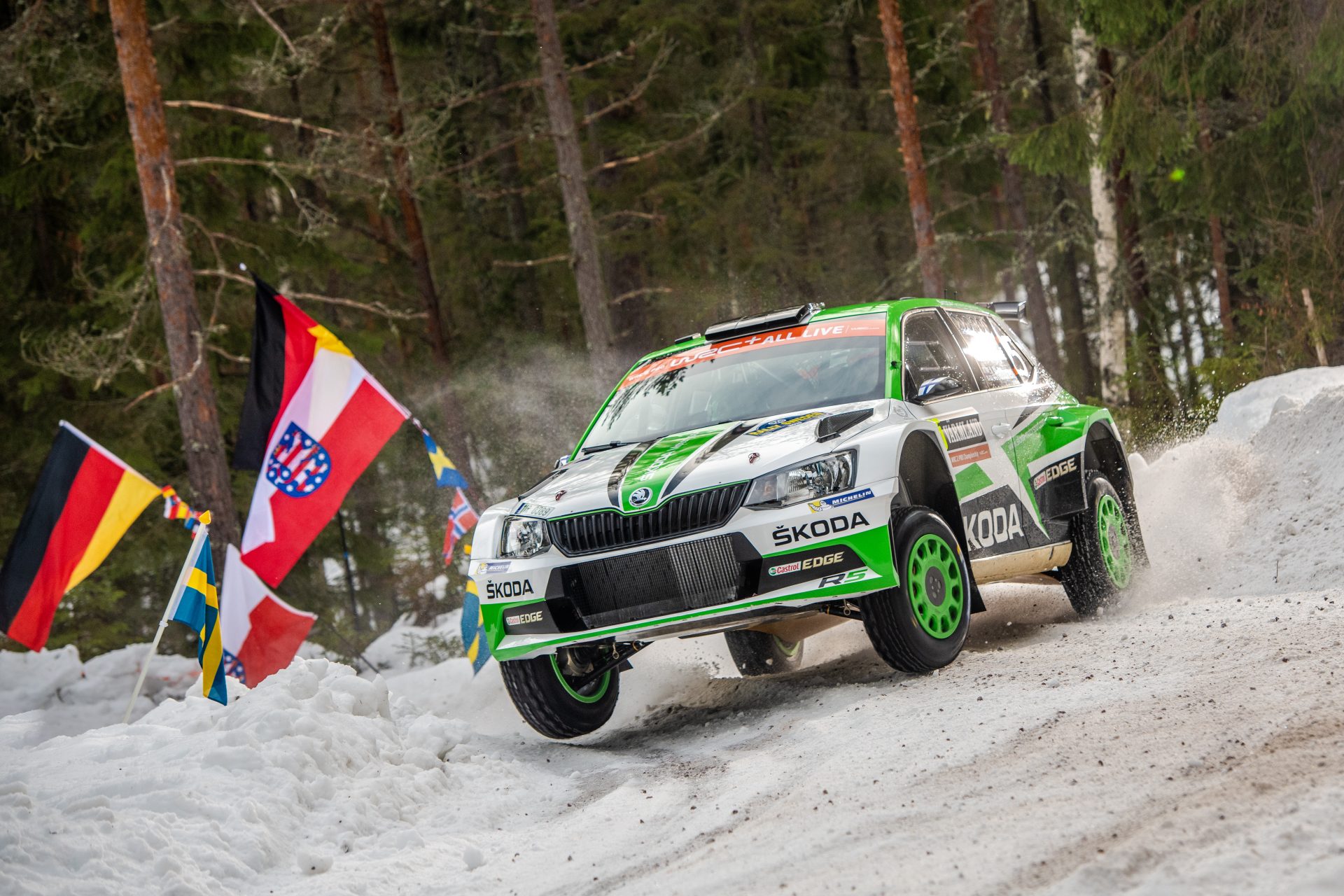 The only true winter rally is here and for ŠKODA Motorsport, it means that it’s time for some Scandinavian dance on ice. Two young drivers from Finland are representing the factory team in the new WRC 2 Pro category. Kalle Rovanperä with co-driver Jonne Halttunen aims to replicate his successes from the 2018 season, while for Eerik Pietarinen with co-driver Johana Raitanen, it is a debut in the ŠKODA works car.

What lies ahead of them is a lot of snow and ice, piles of studded tyres, long drifts and of course jumps. And, last but not least, fierce competition from other drivers on R5 cars. If you have already read our detailed article about Rally Sweden, it’s time to watch what happens on the rally. Follow regular updates here!
CLICK HERE TO JUMP TO LATEST NEWS

In the Thursday morning’s shakedown, Kalle Rovanperä once again proved that even being best is not always enough for him. After two runs, he found his ŠKODA FABIA R5 to be understeering more than he liked. Even though he was already quickest so far, he went to service to change the setup. After the car was fine-tuned to his liking, he returned to the track, setting a dominant fastest time both in the WRC 2 Pro category and among R5 cars overall. His new teammate Eerik Pietarinen shared the second best time in WRC 2 Pro with Mads Ostberg.

Rally Sweden started out really great for ŠKODA Motorsport newcomer, Eerik Pietarinen. In the opening Super Special Stage at Karlstad’s trotting track, he managed not only to secure the first place in WRC 2 Pro standings, but he was even faster than some WRC cars, namely Hyundai driven by Sébastien Loeb and Fords driven by Elfyn Evans and Pontus Tidemand. Among the R5 cars, he shares the first place with Jari Huttunen, also on FABIA R5.

His teammate Kalle Rovanperä was just a second slower, behind Mads Odstberg and his Citroën C3 R5. This means that ŠKODA Motorsport drivers are currently in 1st and 4th place overall both in WRC 2 Pro and among R5 cars overall. Seven out of top nine R5 cars are ŠKODA FABIA R5s.

The second day of Rally Sweden took crews over the border, to the fast and winding forest roads in Norway. For Kalle Rovanperä, the day started with mixed feelings. He confessed that he needs more confidence in his car’s setup, but he still managed to post the fastest time. One stage later, though, he totally lost his confidence and spun his car into a snow bank. With the help of spectators, he was able to get back on track and continue, but the mishap cost him 2:22 minutes. “I don’t like to drive like I am at the moment. My mistake – that’s it!”, confessed young Finn.

The morning was even worse for Eerik Pietarinen. ŠKODA Motorsport newcomer also hit a snowbank and after getting back to the road, he rolled his car in the last corner of SS3. Even with damaged car and without a windscreen, Pietarinen managed to get through the next stage and to the service park at Torsby. At the same time, Rovanperä was back in the rhythm and set the fastest time in WRC 2 Pro, together with Mads Ostberg on Citroën.

At this moment, ŠKODA Motorsport drivers are 3rd (Rovanperä) and 4th (Pietarinen) in WRC 2 Pro category.

After the mid-day service, the crews repeated the three stages from the morning and then finished the day with a special stage near the Torsby service park. “Now we start from the beginning again,” Kalle Rovanperä looked back on his unlucky Friday morning and started a race to catch up with his ŠKODA FABIA R5. Rising temperatures turned snowy roads into gravel tracks, and Rovanperä eventually set three fastest times in WRC 2 Pro out of afternoon’s four stages, and two times, he the fastest one of all the R5 cars.

“My driving was much better in the afternoon, but these conditions are really hard. I never drove with studded tires on roads like this with so much gravel, it is really hard to find the right balance”, he said at the end of the day.

His teammate Eerik Pietarinen places 2nd in WRC 2 Pro in two stages and 3rd in the remaining two, keeping his 4th place overall.

29 crews using a R5 car – amongst them 16 ŠKODA FABIA R5 – started Rally Sweden, which clearly proves the success of this category.

In the Saturday’s morning run, Kalle Rovanperä once again won all three stages, steadily closing the gap behind Mads Ostberg who leads the WRC 2 Pro category. His teammate Eerik Pietarinen continued a solid run with one second place and two third places, keeping his 4th place.

For Kalle Rovanperä, the afternoon part of Saturday’s leg ended with mixed feelings. After he ran out of luck and the road in SS13, second stage of the afternoon, he ended up in snowbank once again. He recovered and finished the stage, but this mishap did cost him 2:48 minutes and effectively ended his chances for a victory in WRC 2 Pro. On the other hand, he managed to win all four remaining stages in WRC 2 Pro, which brought the total to seven victories out of eight stages of the day, showing his great pace and skill. Eerik Pietarinen collected a puncture in SS14, but his fourth place in WRC 2 Pro standings remains safe.

For Sunday, true winter conditions finally returned to the tracks of rally Sweden, turning them snow white once again. Kalle Rovanperä enjoyed this change and set another two fastest times in WRC 2 Pro category. “I am trying to take it easy and avoid mistakes,” was his comment.

In total, Rovanperä set 14 fastest times out of 19 stages in the WRC 2 Pro category. Were it not for the time lost by visiting snowbanks, he could very well score a class victory on his first appearance in Rally Sweden. Still, even though it was his first time on the fast snowy tracks in Swedish and Norwegian forests, Rovanperä scored 18 valuable points for the second place in WRC 2 Pro. He is now in the 2nd place of the season’s overall standings, just 4 points behind the category leader Gus Greensmith. Eerik Pietarinen and co-driver Juhana Raitanen had more bad luck and hit a stone during the last special stage. They had to retire from fourth with a broken rim.

ŠKODA Motorsport boss Michal Hrabánek commented: “I am satisfied with Kalle’s performance. He has been at Rally Sweden for the very first time and showed again his potential against much more experienced competitors.”