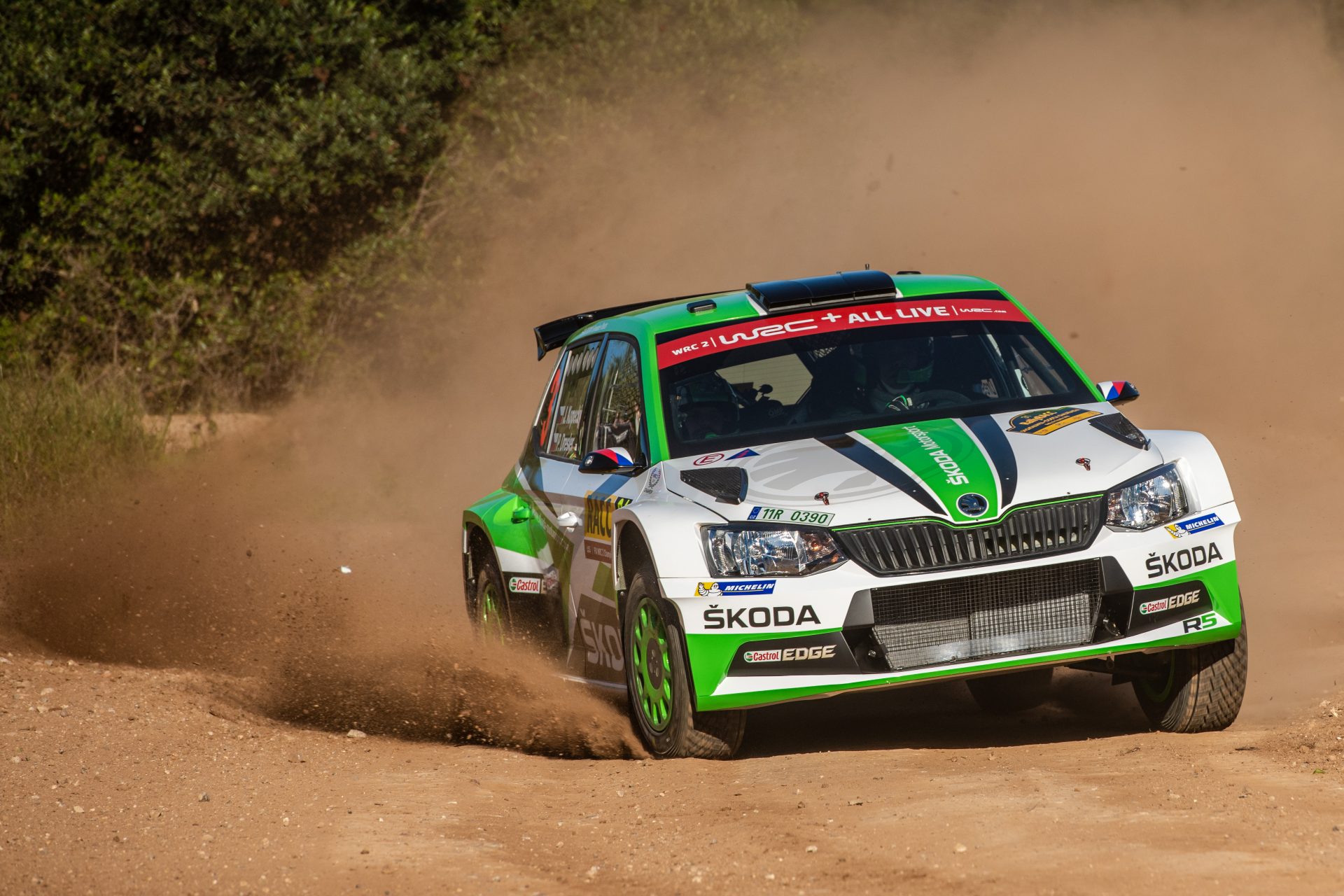 For ŠKODA Motorsport, the RallyRACC Catalunya is the last rally of the 2018 season. The Rally Australia was never a plan of the team’s 2018 program and the team has already scored the WRC 2 title in FIA World Rally Championship for Teams, while Jan Kopecký won the WRC 2 title for drivers.

There are still reasons for both ŠKODA drivers to give their best at the mix of gravel and tarmac roads around Barcelona. Jan Kopecký wants to finish off the best season of his career with another great run, while Kalle Rovanperä still has his chance of moving up to the third position, ahead of Gus Greensmith. That would mean a 1-2-3 finish for ŠKODA Motorsport in the overall standings.

The challenging stages, with one gravel and two tarmac legs, lots of dust, tyre-eating roads and a need to change both the car’s suspension setup and drivers’ mental setup on Friday night, the RallyRACC Catalunya promises to be a thrilling end of the season for the ŠKODA fans.

The two ŠKODA Motorsport crews, Jan Kopecký/Pavel Dresler and Kalle Rovanperä/Jonne Halttunen, entered the Sunday’s final leg of the RallyRACC Catalunya at the top of the overall WRC 2 standings. For Jan Kopecký, the day was about chasing his teammate Kalle Rovenperä and trying to overtake him in the lead of the rally. And he did his best winning three out of four stages (SS15, SS16 and SS18) and placing third in penultimate stage of the day, SS17.

This wasn’t enough, though, to catch up with the Finnish youngster, who kept steady and reliable pace and finished the day in the first place. Winning his second WRC 2 in a row, Kalle Rovanperä scored enough points to move up to the 3rd place of the WRC 2 overall standings, completing the 1-2-3 victory for ŠKODA Motorsport.

Even if RallyRACC Catalunya was the first rally this year Jan Kopecký entered and didn’t win, he had enough reasons to celebrate, as he finished the season at the top of the WRC 2 standings and became the first Czech driver to became a world champion behind the wheel of a Czech car – and all that on the 100th anniversary of founding Czechoslovakia in 1918.

On the podium in Salou alongside the Mediterranean Sea, new WRC 2 champion was more than satisfied with the results: “This is a very special day for me. Today, my home country celebrates its 100th birthday. We are delighted to become WRC 2 champions and so could crown a fantastic season!” One of the first to congratulate was Christian Strube, Head of Technical Development ŠKODA AUTO. ŠKODA Motorsport boss Michal Hrabánek added: “Now it is time to celebrate! Kalle and Jan did a great job. The whole team made it possible for us to enjoy the most successful year in the history of ŠKODA Motorsport!”

After the mid-day service in Salou, four more stages were ahead of the crews – repetitions of the morning’s three stages and 2.24 kilometre stage Salou that finished the afternoon. The two ŠKODA works drivers started into the afternoon run from podium positions, Kalle Rovanperä in the lead and Jan Kopecký in the third place, behind Eric Camilli. Both ŠKODA crews kept their tyre choice from the morning, with Jan Kopecký driving on soft slicks and Kalle Rovanperä choosing the conservative option of rain tyres.

While Eric Cammilli had to retire due to gearchange problems with his Polo GTI R5, Kopecký posted quickest time, half a second ahead of the category leader Rovanperä. This meant that he moved up to second position and ŠKODA Motorsport drivers were now 1-2 in the overall standings. In the remaining three stages of the day, Kalle Rovanperä scored two second-place finishes and won the closing stage of the day in Salou. The works drivers finished the day still in first and second place, with another double victory in sight.

Tomorrow, the final four stages are going to decide the overall result of the rally and the winner will be crowned on the podium in Salou at 14:01 local time.

With the cars converted to tarmac settings and their minds ready to tackle the tarmac leg of the rally, crews departed from Salou to tackle seven special stages totalling over 121 kilometres. To make it even more interesting, the rainy weather made the stages wet and slippery. This was a mixed news for the team – while Jan Kopecký is a tarmac expert and such conditions were exactly what he wanted, his young teammate Kalle Rovanperä has never ever driven his ŠKODA FABIA R5 on wet tarmac, so the slippery roads were to be a huge challenge for him. The team faced a tough decision as well, having to pick either wet tyres for rainy conditions or soft tyres that work better when the tarmac dries up.

After the opening stage of the day, 14 kilometre long Savallà, had to be cancelled because huge crowds of fans were uncontrollable and presented safety risk, the tarmac part of the rally started with 21.25 kilometre long stage Querol. Here, the tyre choice proved to be really crucial. While Jan Kopecký was confident enough to go for soft slicks, Kalle Rovanperä, a novice on wet tarmac, went for a safe bet and picked the rain tyres. The weather proved Kalle right, as the rain got stronger and with second best time in the stage, he moved to the top of the overall standings.

Jan Kopecký was less happy with his tyre choice, the soft slicks lacking grip in heavier rain, but his tarmac mastery got him to the third quickest time, which also moved him into the third place overall. In SS10, Kopecký regained his pace and posted the best time, while Kalle Rovanperä finished 4th, defending his leading position.

Four more stages are to be driven in the afternoon.

It took Kalle Rovanperä much less than expected to prove that he still has a chance for a podium finish. After the mid-day service, he really found his pace and right from the start, he posted the fastest time in SS5, beating Eric Camilli and his Volkswagen Polo GTI R5 for the first time. This moved him up to the fourth place, right behind his teammate Jan Kopecký.

This was only the start of the tense battle between ŠKODA and its sister brand, Volkswagen. With third best time in SS6, Kalle moved ahead of Jan Kopecký and back to the podium position. With the competition heating up, he put everything into the repetition of the longest stage of the rally, SS7 La Fatarella – Vilalba 2. Once again, he was the fastest and jumped into the 2nd place in overall standings, almost 8 seconds ahead of the rallying legend Peter Solberg in the second Polo GTI R5. Kopecký finished third and kept his overall fourth place.

In the evening, the teams are switching the cars over to tarmac settings and the drivers have to prepare for a complete change of their driving style. With the remaining two legs taking place on smooth tarmac roads, we can expect an exciting race for the victory with many surprises!

The Friday morning took crews to the loop of three stages, which are to be repeated once again in the afternoon. Unlike the weekend legs of the rally, the Friday is run mostly on gravel roads, but to make it more challenging to the crews, some tarmac sections are included as well.

The first stage, Gandesa 1, was more of a warm-up, with just 7 kilometres, followed by a 26-kilometre long Pesells 1 and the longest stage of the rally, almost 39 kilometre long La Fatarella – Vilalba 1. The 20 crews of the WRC 2 category were in for a tough morning.

Right from the start, a tense battle for the top positions started to rage. Camilli on brand new Volkswagen Polo GTI R5 set the first best time, while Huttunen on Hyundai was quickest in the second stage. Kalle Rovanperä was second in category after two stages, while the new WRC 2 champion Jan Kopecký occupied the sixth position.

The last stage of the morning shuffled the standings quite a bit. While Jan Kopecký set the second quickest time and moved to the third place in overall standings, his young teammate Kalle Rovanperä had an issue: “One kilometre after the start, the handling of the car started to feel a bit strange. First, we thought we have a puncture and discussed whether to stop. Luckily, we carried on and later found out that there was something wrong with the rear suspension which was changed at the service. It was really a shame, this was a stage that could have made a difference”

After the morning loop, Kalle Rovanperä is in the fifth position of the overall standings, with podium finish still within his sight before the afternoon repetition of the morning run.

The super special stage in the streets of Barcelona was a true crowd pleaser, with cars racing in front of the Palaun Nacional building and around the famous Magic Fountain. This time, ŠKODA drivers started to push harder and after a smooth run, Kalle Rovanperä finished the stage in second place, just over a second behind Eric Camilli on the new Polo GTI R5. Jan Kopecký took 0,4 second more to complete the stage, scoring third position. The Friday’s stages promise interesting fight on dusty gravel roads!

The shakedown, which took place on dusty dirt roads around Salou, saw ŠKODA Motorsport drivers compete against the FABIA R5’s sister car, the Volkswagen Polo GTI R5, for the first time. Both Jan Kopecký and Kalle Rovanperä started off easy, focusing on bringing their cars home in one piece. They finished in sixth (Kopecký) and seventh (Rovanperä), with Henning Solberg on another FABIA R5 in front of them in the fifth position.