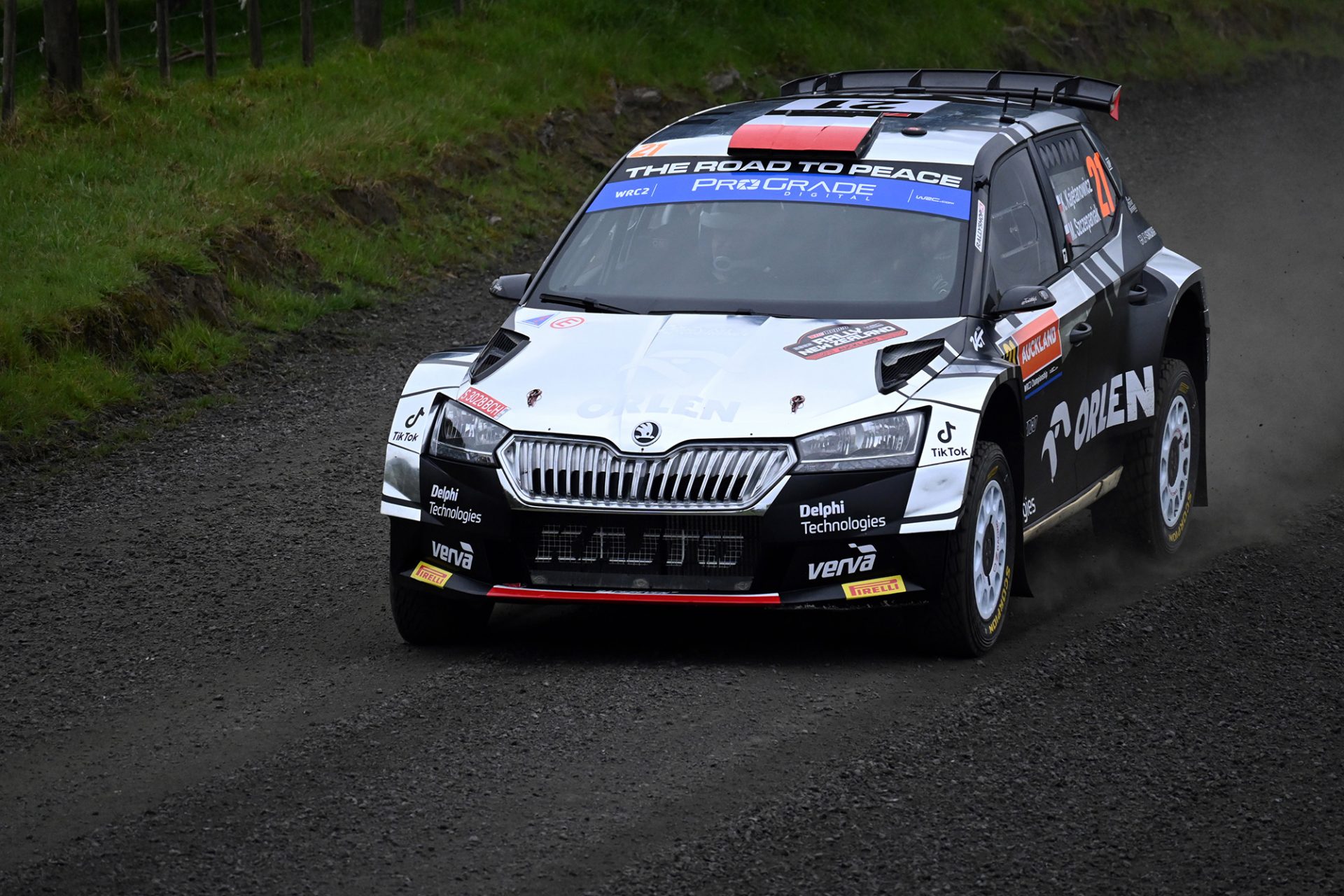 Mladá Boleslav, 19. October 2022 – The fight for the 2022 WRC2 title goes down to the wire between three drivers of ŠKODA FABIA Rally2 evo. Only two of them have entered the upcoming RallyRACC Rally de España (20-23 October 2022), the FIA World Rally Championship’s penultimate round. Current leader Andreas Mikkelsen will be absent, because the Norwegian has already competed the maximum of seven events permitted by the regulations. Kajetan Kajetanowicz from Poland and Finn Emil Lindholm on the other hand can still score points for the WRC2 Drivers’ Championship.

Reigning WRC2 champion Andreas Mikkelsen of ŠKODA Motorsport supported team Toksport WRT has to take the role of a spectator as his project title defense reaches the final phase. Going into the season’s penultimate round in Catalonia, the Norwegian leads the WRC2 overall standings. But as they have already competed in seven events, the maximum allowed by the regulations, Mikkelsen and co-driver Torstein Eriksen have to forego RallyRACC Rally de España as well as the remaining round in Japan.

That leaves the door wide open for the currently second and third placed drivers, Kajetan Kajetanowicz from Poland and Emil Lindholm from Finland. RallyRACC Rally de España being only the sixth event of the season for both, they have good chances to overtake Mikkelsen. With a total of 56 points still at stake, Kajetanowicz trails Mikkelsen in the WRC2 overall standings by 13 points. Lindholm is a further seven points down.

With these results, Lindholm has already secured another 2022 title – the overall victory in the WRC2 Junior classification for drivers 30 years and younger. Second placed Chris Ingram from England, the only driver who mathematically could challenge Lindholm, will not compete the remaining two WRC2 rounds. In the WRC2 Masters category for drivers 50 years and over, the two frontrunners clash on the tarmac stages of Catalonia. Armin Kremer from Germany, sharing a Baumschlager Rallye&Racing run ŠKODA FABIA Rally2 evo with his daughter Ella, leads Mauro Miele by 14 points. The Italian competes together with co-driver Luca Beltrame in a ŠKODA FABIA Rally2 evo of team Dream One Racing.
The 57th running of the officially named RallyRACC Catalunya Costa Daurada Rally de España features a bumper WRC2 entry list. 33 crews are expected to start, 15 of them put their trust in a ŠKODA FABIA Rally2 or ŠKODA FABIA Rally2 evo.

The WRC’s penultimate round is based in the Mediterranean tourist resort of Salou, some 100 kilometres southwest of Barcelona. The event consists of 19 special stages with a total length of more than 290 kilometres on mostly winding and smooth asphalt roads. Friday (21 October) offers eight speed tests with a total length of around 119 kilometres. On Saturday, seven stages over 118 kilometres are on the agenda. Sunday will bring the decision with a 56 kilometres sprint over another four stages. The winner is expected on the seafront podium at approximately 1:50 pm local time.

...the event today known as RallyRACC Rally de España was first held in 1957, was added to the European Championship in 1975 and first appeared on the FIA World Rally Championship calendar in 1991?

...until 2019, the event was the only WRC round with complete legs made up of either gravel or asphalt stages and therefor the cars’ setup had to be changed from one spec to another during the rally? Only since last season, RallyRACC Rally de España is held exclusively on tarmac.

...the waterfront promenade of Salou provides the setting for the start ceremony on Thursday evening as well as for the finish on Sunday?

...the service park will be set up on the grounds of PortAventura World, offering, among other attractions, the “Dragon Khan” roller coaster featuring eight vertical loops and speeds of up to 110 kph?