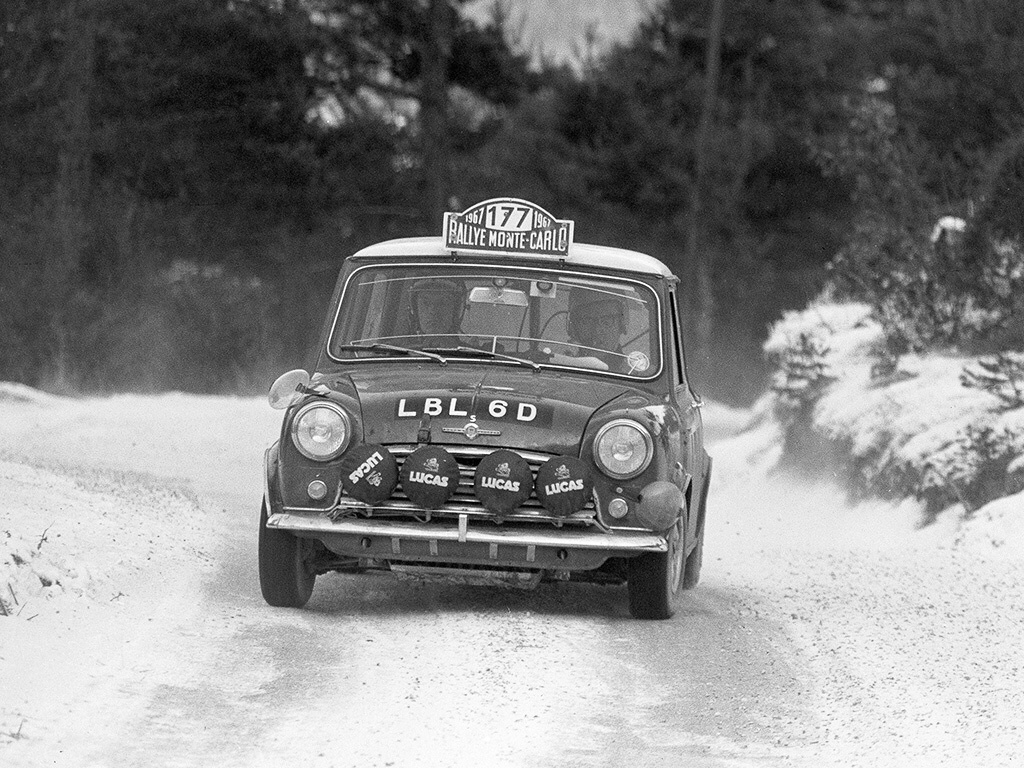 One of the original “Flying Finns“, and the first driver ever inducted into the Rallying Hall of Fame, he famously raced almost anything with an engine. Rauno Aaltonen, who is 80 years old, proves that the old saying “those who can, do; those who can’t, teach” isn’t alwaystrue. In his native Finland, he runs a family rally school, focused on snow driving and techniques that The Professor, as they call him, honed to perfection. You certainly can’t accuse the 1965 European rallying champion of lacking talent…

Rauno Aaltonen was born on 7thJanuary 1938, in Turku. That’s in Finland, although it doesn’t sound like it. His father, August Aaltonen, raced cars after World War II and later moved on to speedway. In 1950s, he started building his own speedway motorcycles, running a successful racing team which managed to win the national championship several times. He went on to build speedboats and racing cars.

It’s not surprising that Rauno followed in his father’s footsteps and started racing speedboats. He progressed to motorcycles, trying his hand not just at speedway, but also at roadracing, circuit racing and motocross. Before he finally switched to four wheels, he became the first Finn ever to win a motorcycle Grand Prix.

He had no intention of starting his rallying career modestly. He went straight for one of the most demanding events around –Jyväskylän Suurajot in his native tongue. For those who don’t speak Finnish, that means the Thousand Lakes Rally. In 1958, he entered the rally in a very successful, although rather obscure, Saab 93 B. Beginner’s luck eluded him and he had to retire, but it’s possible that it was behind the wheel of this car where he instinctively discovered the technique that later made him famous and placed him on podiums around the world on a regular basis. What was it? Rauno Aaltonen was one of the foremost proponents of left-foot braking. This allowed him to drive through corners, especially those on snow and ice, in a fast, controlled slide.

The design of the Saab 93 was ingenious and very advanced for its time, but its appearance didn’t inspire much hope of rallying success. In spite of its looks, however, the cute, stocky car racked up win after win in the hands of Scandinavian drivers. For example, in 1957 it won both the 750 cc class at Mille Miglia and the Thousand Lakes Rally, and in 1959, it came second in its class (and 12thoverall) at 24h Le Mans.

The car from Trollhättan had a monocoque body, a very light 750cc two-stroke engine under the hood and front wheel drive. Even in the stock, non-lightened form, it weighed just 780 kg. Aaltonen couldn’t have wished for a better vehicle in which to hone his left-foot braking technique.

So, what’s the trick? You use your right foot to control the accelerator pedal, instead of having to take care of both the accelerator and the brake. Your left foot operates the brake and the clutch. Braking before the turn transfers the weight forward, and the lightening of the rear wheels makes it possible to send the car into a slide with just a slight turn of the steering wheel. It’s a good idea not to move the steering wheel around too much on the ice, anyway. All the while the right foot keeps the engine at high revs, so it doesn’t lose power.

While a rear-drive car can be persuaded to slide using just the throttle, a front-wheel-drive car, with its natural tendency to understeer, requires a different approach. To complicate things even further, a two-stroke engine, with its small displacement, needs to be kept at high revs in order to provide the power required  to exit the turn as fast as possible. Still not enough to deal with? There’s one more typical feature of a two-stroke: the engine doesn’t lubricate itself during engine braking, because it doesn’t have a separate lubrication system; the oil is mixed into the fuel. This creates a risk of engine seizure.

Given such hardware, the “Flying Finns” had to develop a technique to overcome these problems. In time, they improved it so much that they were the fastest on both icy and gravel roads, no matter if their car was FWD, RWD or AWD. had. They probably didn’t even realize how useful this style of cornering would become in the future, with the advent of four-wheel drive and turbochargers, as keeping the engine in high rpms helps keep the turbo boost and minimizes the turbo lag.

During the 1959 and 1960 seasons, Aaltonen was once again driving a Saab 93, but in three of his rally events, he tried out some very different machinery. From the obscure and rather weird Saab, he switched to the no less fascinating Mercedes-Benz 2220 SE. Like the tiny, front-driven Saab, the massive four-door touring saloon certainly had many fine features, but they seemed unlikely to include a talent for rally. However, Aaltonen had plenty of talent, enough to steer the Teutonic behemoth to victory in the 1961 Thousand Lakes Rally. In the same season, he also won the Finnish rallies Hankiralli and Ralli 500 in a Saab 96 (a successor of the 93).

In 1962, Aaltonen made another switch, this time to the car which would bring  him his greatest successes: the Mini (under the brands Austin, Morris or BMW, depending on how the marketing department shuffled their cards in the confused British Leyland corporation). Once again, no one would have gambled a single penny on this tiny people’s car, designed by the talented Alec Issigonis, achieving any kind of competitive success – not even with the performance modifications added by the no less talented John Cooper. Yet the compact city car with transverse-mounted four-cylinder engine became a legend of rallying –  and the Flying Fins were instrumental in this.

The most memorable part? Furious little Minis charging through the hairpins above Monaco during Rallye Monte Carlo. Aaltonen himself was close to winning the rally in 1962, but with just three kilometres to go, he left the track in a spectacular somersault and the laurels went to another Finnish legend, Eric Carlsson, driving a Saab.

The next season, 1963, saw Aaltonen winning his class at Monte, finishing in third place overall. He collected 41 championship points throughout the season, switching between the Mini, the Saab, an MG 1100 and an Austin Healey 3000. He also continued his tradition of bringing something totally unexpected to a rally, this time appearing at the start of the Svenska Rallyt till Midnattssolen (Rally of the Midnight Sun) in a Chrysler. To be exact, he brought a Chrysler Valiant Estate. Yes, Aaltonen really brought an American wagon to a winding gravel rally in the woods of Finland. He finished in 10thplace.

In 1964, he once again switched between Saab and the British manufacturers, but he didn’t do all that well, although he managed to win a Liège-Sofia-Liège endurance rally in an Austin Healey 3000. The following year, he drove a Mini for the whole season and won seven rallies, including Rally Vltava in Czechoslovakia, and was runner-up twice. The curse of Monte Carlo remained with him, as he didn’t finish again, but he didn’t have much to feel bad about – he managed to become European rally champion anyway and won the Finnish championship as well.

After Minis won the Rallye Monte Carlo in 1964 and 1965, driven by Paddy Hopkirk and Timo Mäkinen, the tiny cars almost managed to get a podium 1-2-3, from Mäkinen, Aaltonen and Hopkirk respectively. It looked like the Professor would finally get lucky in Monaco, until the organizers disqualified all three Minis because their add-on headlights were not fully compliant with the rules. Aaltonen had to wait for victory at Monte Carlo until 1967, when he finally steered the little car into first place. This win was overshadowed by his problems in the rest of the season;  he was hounded by technical difficulties and also crashed.

Rauno Aaltonen was active in rallying and racing until 1987. Besides the Minis, he appeared behind the wheel of cars like the Lancia Fulvia, the BMW 2002 and 3.0 CS, the Fiat 124 Abarth Rallye, Fords Escort and Capri, and the Datsuns 240 Z, SSS Coupé, Stanza, Violet and 160J. In 1972, he appeared in Rally Morocco, but he had to retire due to transmission problems. His car was, yet again, something outrageous. Who else would take a Citroën SM with a Maserati engine to the dusty Moroccan desert?

Even at an advanced age, Rauno Aaltonen was a regular at the Rally Safari, considered to be one of the hardest rallies in the world. He competed with Datsuns and also with Opels – the Ascona 400, the Manta 400 and the Kadett GSI. He finished in second place, six times. He raced in 127 countries around the world over the course of his long career.

Those who were lucky enough to meet the Professor in person say that he certainly is not the quiet, distant man one would expect from a legend of his calibre. Instead, he’s described as friendly and merry, and, although getting on a bit, ready and willing to have fun at parties – and to show off his still stunning driving skills the very next day.

If you want to meet the living legend – and, first and foremost, really learn something – try the Aaltonen family rally school in the Finnish town of Tahko. Headed by the Professor’s son, the staff includes racers Tino Aaltonen, Kati Aaltonen and Rauno himself. You will be in the best of hands. From photographs, videos and stories, we really believe that in those parts of the world, the day “has 24 hours and a night”.