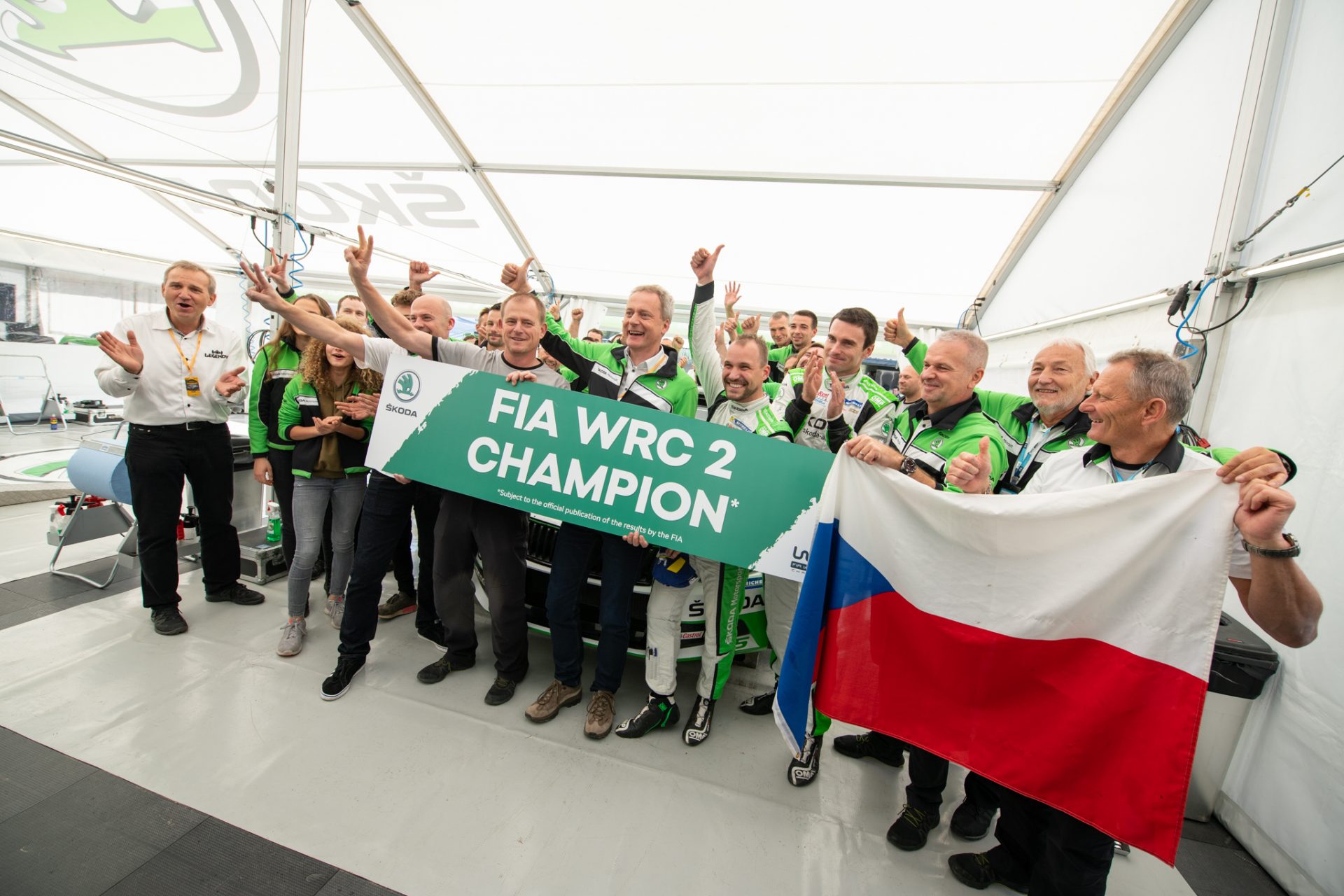 The Season of Dreams: ŠKODA Motorsport in 2018 WRC 2

For ŠKODA Motorsport, this year was the best in history. Winning FIA WRC 2* for Teams title would be enough of a reason to celebrate, especially when it’s for the fourth time in a row. Add to that FIA WRC 2 Driver’s Championship* title – for third time in a row – and then throw the rest of the podium into the mix. Such a thing doesn’t happen every year, even though we would like it to. So let’s go through the glorious season from the first rally to the last, to see how we did it!

To season’s initial event was legendary but tough Rallye Monte Carlo. It runs through snowy passes of Alps and then descends down to eventually end in the streets of the famous city of the rich. This year, Jan Kopecký came here as the sole driver of ŠKODA Motorsport – and proceeded to give himself the perfect 36th birthday present. The first victory in the famous rally. Kalle Rovanperä was here too, driving a FABIA R5 entered by TGS Worldwide. He came in second in RC2 class but wasn’t running for points in WRC 2.

For the 2017 WRC 2 Champion Pontus Tidemand, the Rally Sweden was more important than other rallies. It was his home event and also the first rally of the season in which he strived to defend his title. After an exciting fight for the lead with Takamota Katsuta on Fiesta R5, he eventually finished close second.
His teammate, a ŠKODA Motorsport newbie Ole Christian Veiby, was similarly motivated. It was only his second rally behind the wheel of a ŠKODA works car and, in part, it was also his home turf, as most of the Friday’s leg takes place in Norway. He took a fast but steady approach and finished third after a clean run.

After the snowy Sweden, the team moved to the scorching hot deserts of Mexico. Pontus Tidemand proved to be in his best form, winning the rally in the most straightforward way – by being the fastest from the beginning and keeping in front until the last stage. His young teammate Kalle Rovanperä had a great start, but damaged radiator in SS2 forced him to retire from the first leg and even though he put on an impressive show in the rest of the rally, winning five stages, it was only enough for the sixth place.

The French round of the WRC 2, which takes place on twisty roads of Mediterranean island of Corsica, was perfectly suited for Jan Kopecký and his tarmac expertise. He took off quick, winning the first stage, and stayed in the lead until the very last one, winning 6 out of 12 stages in the process. For his teammate Ole Christian Veiby, it was one of his first tarmac rallies, but he still managed to come in fourth.

The gruelling rally that takes the crews from pampas to high mountain ranges was this year’s first evidence that ŠKODA Motorsport drivers are their own best competition. Since the first stage, Pontus Tidemand and Kalle Rovanperä took turns winning stages, with Pontus staying in the lead until Kalle overtook him in SS11. From there, a chase of the 2017 WRC 2 Champion to catch up on a 17-year-old youngster begun. It promised a nail-biting finish, with Pontus being just 9.9 seconds behind going into the penultimate stage. Then, Kalle ran out of luck and had to retire after a mishap, leaving the victory to his colleague from Sweden.

With rutted tracks full of dangerous rocks and lot of jumping, Rally de Portugal is one of the hardest events in the WRC 2 calendar. This year, it did show its teeth when both works crews, Pontus Tidemand / Jonas Andersson and Juuso Nordgren / Tapio Suominen, had a series of punctures in the first leg. Pontus Tidemand, who was on the very bottom of the overall standings after SS2, started doing what he does best – winning stages. After winning ten in a row and fourteen in total, he once again walked away with gold medal, while his teammate Juuso Nordgren came in sixth.

Another rally made challenging by an unpredictable weather, Rally Italia Sardegna, was a testament of ability of ŠKODA works drivers to cope with unexpected. Ole Christian Veiby even drove a three-wheel-drive car for a few stages, after he damaged the right front driveshaft. In second leg, Jan Kopecký regained his pace after initial problems, moved up to the first position and stayed there until the end. OC Veiby did his best to erase the loss from the earlier problems and finished the rally a runner-up behind his teammate. Another double for ŠKODA!

This time it was Kalle’s turn to show his abilities on his home turf. And he started out great, jumping into the lead in SS2 and staying there for most of the rally – until a jump landed him on a rock hidden in a rut in SS18. The impact ripped of his left front suspension, with shock absorber going through the car’s hood. Once again, the sturdiness of FABIA R5 and ingenious roadside repair done by Kalle and his co-driver Jonne Halttunen enabled them to continue, but the time loss was huge. After the car was repaired, they started a valiant chase after the pole position, but in the end, they ended just short of the third place.

Ole Christian Veiby was even less lucky. First, he damaged rear-right wheel and had to drive with brakes on just three wheels for some time, and then, also in SS18, he went off the road and had to retire. It was the only rally of the season where ŠKODA Motorsport did not score any medals.

Taking place in the wine country around the river Mosel, the Rally Deutschland was a story of unlucky moments and incredible comebacks for ŠKODA Motorsport crews. After a puncture in SS9, Jan Kopecký fell from the lead to the ninth place. At that moment, a race back to the top begun. It took him until the penultimate stage, SS17, to regain the lead. In the meantime, his young teammate Kalle Rovanperä’s steady and reliable place to him to the first place in SS15 and after being overtaken by Kopecký, the youngster finished 2ndoverall. A stunning result for a newbie with very limited tarmac experience, and another double for ŠKODA!

This rally was a big unknown – a brand-new event in WRC 2 that the teams have never driven before. And with its combination of smooth, fast tracks around the coast and rocky, rutted gravel roads in the mountains, it was destined to be a challenge. For ŠKODA Motorsport drivers, it was also a battle that could decide the championship – will Pontus Tidemand defend his 2017 title, or will Jan Kopecký claim his first?

From the beginning, Jan Kopecký was the faster of the two, keeping his lead until Friday afternoon. Then, the problems struck both crews – both Kopecký and Tidemand collected two punctures each, leaving them with no spares left. For Kopecký, it meant falling to third place in overall standings, while Pontus Tidemand had to retire when he discovered hidden suspension damage. It took Kopecký until the end of Saturday leg to regain his lead, but he stayed on top until finish and collected another gold.

For Kalle Rovanperä, the Welsh rally was special in several ways. He celebrated his 18th birthday the Monday before and it was also the first WRC 2 rally he ran for the second time as ŠKODA works driver. His main competitor was once again the 2017 WRC 2 Champion Pontus Tidemand. This time, the rally went without much drama – Kalle took the lead in the first stage and kept it until the last one, while Pontus stayed right behind him in the second place. For Kalle, it was the high point of his career to date and the greatest birthday present.

For ŠKODA Motorsport, the RallyRACC Catalunya was the last event of this year’s calendar, as the team never planned to go to Rally Australia. While Jan Kopecký was already certain to become the WRC 2 Champion*, he wanted to celebrate the end of his season with a great result. For Kalle Rovanperä, this rally was the opportunity to collect enough points to move in front of Gus Greensmith and to the third place in overall standings of the 2018 season.

Even though Kopecký had nothing to gain or lose from the rally, he gave everything into his performance. After too confident tyre choice in Friday’s rainy leg, he lost some time, but he still managed to finish second, celebrating the end of his season and the 100thbirthday of his country with a podium finish.

However, it was Kalle Rovanperä who became the hero of the day. Even with his lack of experience on tarmac, especially in rain, he managed to move up to the lead of the rally and stay there until the end. His second victory in WRC 2 ever, second in a row and second in just one month was a great ending of ŠKODA Motorsport season. And it meant that the team finished the year 2018 with a 1-2-3 victory.

We hope that the next season will be as good as this one!