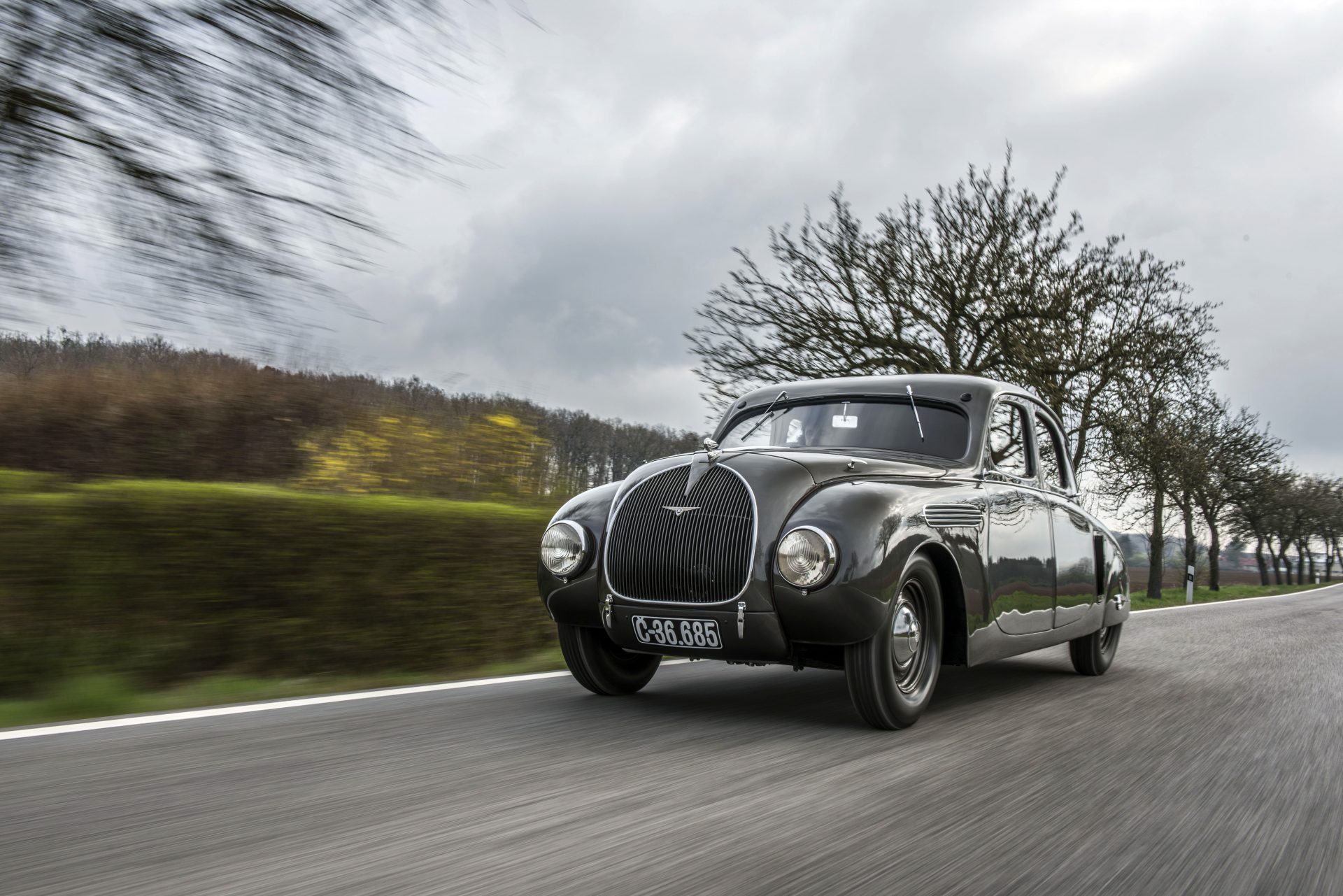 It looked like a car from the future, with its aerodynamic bodywork and futuristic rear-mounted boxer engine. The ŠKODA 935 was a pioneer of the new era.

In 1935, most cars were boxy, much closer in appearance to old horse-drawn coaches than to modern cars. They ploughed through the air rather than slicing through it. Although people already knew about aerodynamics and were using it on airplanes, only a few daring pioneers were trying to apply it to making cars.

After many failed attempts, Chrysler and Tatra came up with first mass-produced streamlined cars in 1934. Their efforts, the Airflow and T77, are well-known, and regarded as game-changers in the industry. While the Airflow kept the traditional layout with a front-engine and rear-wheel drive, Tatra went much further and chose a more radical solution, with an air-cooled V8 engine in the back, an innovative backbone frame and swing axles.

While Airflow failed commercially due to its unorthodox looks, the Tatra became a legend. Until recently, however, hardly anyone knew there was another Czech car with a similarly bold layout and futuristic design. It was called the ŠKODA 935 and it made its debut at the Prague car show in April 1935.

Its most striking feature was, of course, the streamlined bodywork. Its shape was based on the aerodynamic principles laid out by Paul Jaray – a former designer of Zeppelin airships and assistant at the Prague Technical Univesity, who influenced the design of Tatra’s streamlined cars.

There was more to the 935 than aerodynamics, though. Its low, sleek body wasn’t supported by a ladder frame, like most cars of its era. It had a backbone tube frame that was also used to house the 40 litre petrol tank. This design allowed the experimental ŠKODA to be much lower and more aerodynamic than most cars of the era.

The innovations didn’t end there. The 935 was fitted with independent suspension of all four wheels, using swing axles. That was something you could find in Tatras as well, but ŠKODA’s solutions were cleverer. For example, the flat-four engine was placed not behind the rear axle, but in front of it. This allowed for excellent weight distribution, improving the car’s handling and stability.

Together with the streamlined shape, this meant that the 935 was able to drive comfortably at 130 – 140 km/h, making it exceptionally fast for its era. It was a precursor to the kind of fast highway travel which only existed as an idea at the time. It was no cramped sportscar, either. At almost 5 metres in length, it offered a spacious interior for up to five adults plus 300 litres of luggage in the front compartment. There was also a horizontally mounted spare wheel that acted rather like a second bumper.

Also remarkable is the fact that all it took to propel such a large car to highway speeds was a two-litre, flat-four engine with an output of just 55 hp (40.5 kW). Such efficiency is a testament to the vehicle’s aerodynamics.

Unfortunately, we don’t know whether any more of these unique cars were ever manufactured. What we do know is that the prototype introduced at the Prague car show was sold to a private buyer in the summer of 1939. Later, it cruised around the Slovak roads in the hands of a local farmer, who finally offered it to the newly founded ŠKODA Museum in 1968.

The car spent decades in storage before the time finally came to restore it. It took 6 years of painstaking, passionate labour to return it to its former glory. Thankfully, the car was remained almost completely in its original condition, with only the paint and dashboard differing from the 1935 original. A bit of original paint on the inner side of one pillar helped to match the proper shade of grey, while the dashboard and other parts of the car were restored using period photos.

Today, the 935 is one of the most cherished exhibits of the ŠKODA Museum and a reminder that ŠKODA was already innovative and daring decades ago.