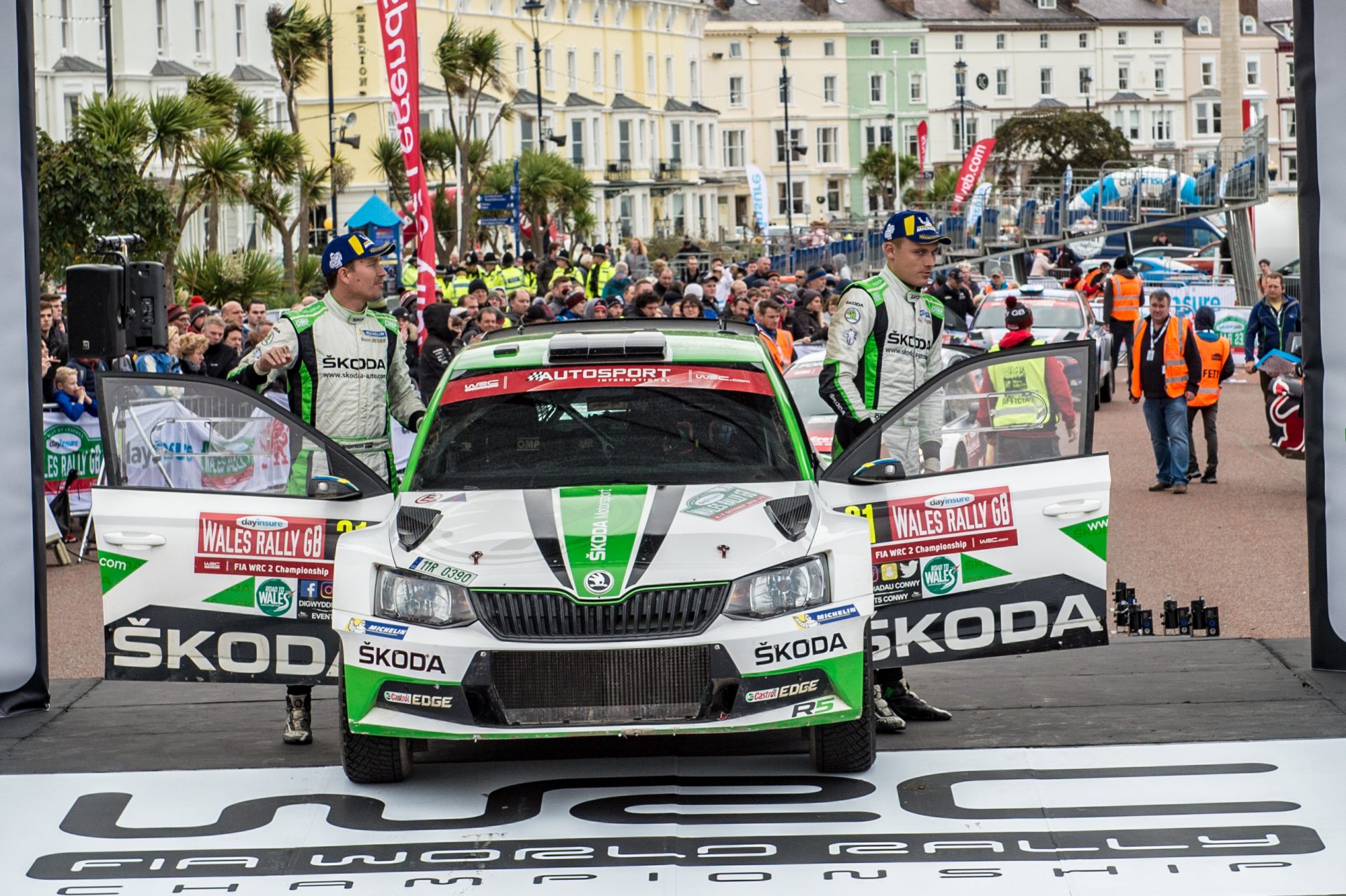 It is that time of year again. The wet and muddy forest roads in Wales will, once again, welcome the fastest rally drivers in the world. Crews will cover more than 318 kilometres of challenging stages, facing wide variety of conditions. Muddy forrest tracks, tarmac links between them, sweeping roads in the moorlands – the Wales Rally GB may be foggy and rainy, but you sure can’t say it’s boring.

This year, two of the ŠKODA Motorsport drivers are returning here. While Pontus Tidemand will try to repeat his victory from last year, youngster Kalle Rovanperä is revisiting the first rally where he drove a ŠKODA works car. And he’s celebrating his 18th birthday. So, let’s dive into the news!

On Sunday morning, the crews departed to the final, shortest leg of the rally. It featured just 55.64 kilometres of mostly tarmac stages, including spectacular Great Orme Llandudno with eight kilometres of stunning road twisting by the Atlantic shore.

For Kalle Rovanperä, who apparently decided to celebrate his 18th birthday with his first WRC 2 victory this year, it was the same as in the days before. He set his 14th fastest time in WRC 2 category in SS19, the first stage of the day. “I am avoiding risks, but I keep my speed in order not to lose concentration”, explained young Finn with his typical disarming understatement. Pontus Tidemand followed his teammate close behind with 3rd best time in SS19, keeping his comfortable lead on Gus Greensmith in overall standings.

The next stage brought another victory for Kalle, while Pontus Tidemand fell to 7th place after hitting an obstacle with the right-rear side of his ŠKODA FABIA R5. The car once again proved to be rock solid, but just to be safe, the crew replaced the rear wishbone with a spare they carried on board.

Only three stages were left to go, including two runs over the Llandudno coastal stage. With comfortable lead in the rally, Kalle Rovanperä with his co-driver Jonne Halttunen took a safe approach, collecting one fifth and two third places, more than enough to secure his overall victory in Wales Rally GB, 1:34.2 seconds ahead of Pontus Tidemand and 2:13.6 from the first non-ŠKODA car, Gus Greensmith’s Fiesta R5.

At the finish line of Wales Rally GB, ŠKODA Motorsport boss Michal Hrabánek was more than happy: “Kalle and Jonne did a really fantastic job. They were not only fast, but they also managed to handle the pressure. Under the most difficult road conditions, they brought home their more than deserved victory. Thanks to another great performance, Pontus and Jonas gave the team the third double victory in the WRC 2 category of the 2018 season. I would like to thank the whole team for this great success.”

Number of the day: 3

After the mid-day break, the sun came out and Kalle Rovanperä enjoyed the drive on gravel roads, continuing his awesome run. “Now it’s getting drier ad we have much more grip than in the morning. Nevertheless, there are still some slippery places where we have to be careful”, the young Finn described his successful afternoon. He scored two more fastest times in WRC 2 category, increasing his number of wins to 13 out of 18 stages. The gap between him and his teammate Pontus Tidemand also widened to 1.03 minutes.

Pontus won the last stage of the day, SS18 Gartheiniog, and improved his lead on Gus Greensmith, who keeps 3rdplace with his Ford Fiesta R5, to 1:48.6.

Tomorrow will bring five more stages totalling 55.64 kilometres and the final decision on the winner of 2018 Wales Rally GB, who will reach the podium around 13.15 PM. Keep watching with us!

It’s called Super Saturday and it’s the longest and most challenging day of Wales Rally GB. It’s not just that 150.24 kilometres on typical Welsh forest roads place exceptional demands on both cars and crews. There’s also the absence of service area at the mid-day stop – all you get is a tyre change zone, where crews can only use whatever tools or spares they carry on board. This means that any larger damage or more than two punctures inevitably lead to retiring.

The day started with a scenic stage at Myherin, running in part over open moorland with electric wind turbines in the background. Kalle Rovanperä started the day at a great pace, setting the second quickest time, ahead of Pontus Tidemand, in SS10 and increasing his overall lead to more than a minute. “It was neither a bad stage for me, nor a good one, too” We will see. I think it is going to be a nice fight today”, the young Finn told us after the stage.

After that, in SS11, Kalle once again set the fastest time, still closely followed by Pontus Tidemand in second place who managed to keep Ford driver Gus Greensmith behind him. The next stage meant first victory of the day for Pontus, while Kalle Rovanperä ended up in 4th. The remaining two stages of the morning reverted to a standard set up with Kalle in the lead and Pontus right behind him – in this case, the gap was just 0.3 seconds in both SS13 and SS14.

In the three afternoon stages, freshly 18-year-old Kalle Rovanperä continued to shine in the same way as in the morning run. He impressed both the rallying community and his competitors when he set another three fastest times. Before the end of the day, he managed to increase his lead on the runner-up – his teammate Pontus Tidemand – to 58.6 seconds. His commentary was as calm and understated as ever: “I am doing my normal drive, fast, but avoiding any risks. I am cautious to avoid the rocks on the track.”

The other ŠKODA Motorsport driver Pontus Tidemand engaged in tense fight for the second place with Gus Greensmith on Ford Fiesta R5 and eventually managed to defend his second place. “Tomorrow is a completely different day”, he told us about the upcoming leg.

On Friday morning, the crews set off to the first full leg of the rally – and they started out in a big way, with 110 kilometres to cover on fast and smooth gravel track. In the opening stage of the day, Pontus Tidemand went for a careful approach and finished in eight place.

“I was a bit careful, but it wasn’t bad for the first stage of the day”, commented 2017 WRC 2 champion. On the other hand, his teammate Kalle Rovanperä went all-out from the beginning, winning the first stage 1.6 seconds ahead of Eric Camilli.

The next one to go was the longest stage of the day, Brenig 1. Kalle stormed the 29.13 kilometres long mix of gravel tracks with slippery tarmac passages and finished far ahead from the rest of the field, with 26.2 seconds to the runner-up. This increased his overall lead in the rally to more than half a minute after just three stages. “The time looks quite okay, but this stage was really nice and technical”, commented Rovanperä with his typical Finnish understatement.

At the same time, Pontus Tidemand was struggling with some understeer of his ŠKODA FABIA R5, but he still managed to move up to the third position of the WRC 2 standings. In the next stage, SS4, Pontus moved up to runner-up position, while Kalle continued to improve his lead.

SS5 was the first stage of the rally that Kalle didn’t win, overtaken by his teammate Pontus, who got his first stage victory in this year’s Wales, and privateer Łukasz
Pieniążek on another FABIA R5. In SS6, things returned to the morning’s standard, with Kalle in the first place and Pontus behind him.

After the morning run, Kalle Rovanperä is in the lead, 37.9 seconds ahead of Pontus Tidemand in second place. In the afternoon, three of the morning stages will be repeated.

The real rally started on Thursday evening with Super Special Stage under the spotlights of Tir Prince Raceway circuit. With high-flying jumps and flames lighting up the night sky, this stage is one of the most spectacular in the rally.

Results of ŠKODA Motorsport crews were equally spectacular. Kalle Rovanperä once again proved that he’s pretty fast after his 18th birthday and won the stage with the time of 1:23.8, 0.6 seconds ahead of his teammate Pontus Tidemand in second place. Fabio Andolfi on customer FABIA R5 followed them in fifth place.

This year’s Wales Rally GB started with shakedown on wet and muddy forest track of Clocaenog. Right away, Kalle Rovanperä gave himself a little birthday present when he beat everyone else in WRC 2 with his best time of 2:07.02. He seems to be pretty well prepared to his birthday rally.

Both Kalle and Pontus, who finished the shakedown in 5th position, told us that they’re very happy with setup of their cars and look forward to the rest of the rally.

Watch this space for the latest updates from Wales!