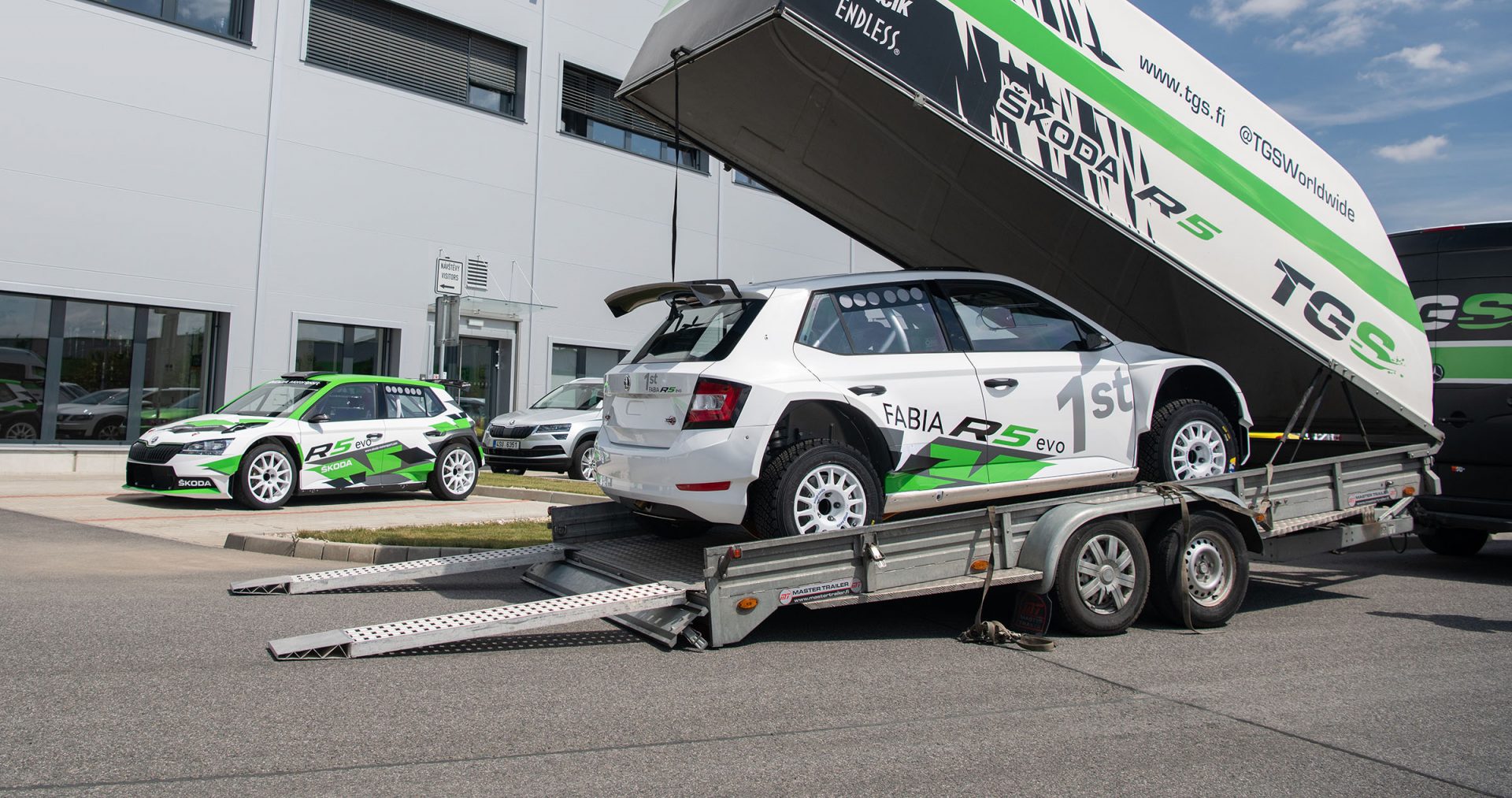 ŠKODA Motorsport have already sold almost 350 FABIA Rally2 cars to drivers and teams all around the world. Selling the car, though, is just the start of any collaboration. Behind it is a massive customer support programme, which is as vital to the results of the rally’s most successful car as its ingenious design is.

“We are available to our teams 24 hours a day and we have very personal relationships with them. Some of our services are completely unique in the rallying world,” David Jareš, the coordinator of the ŠKODA Motorsport commercial programme, said during this interview. 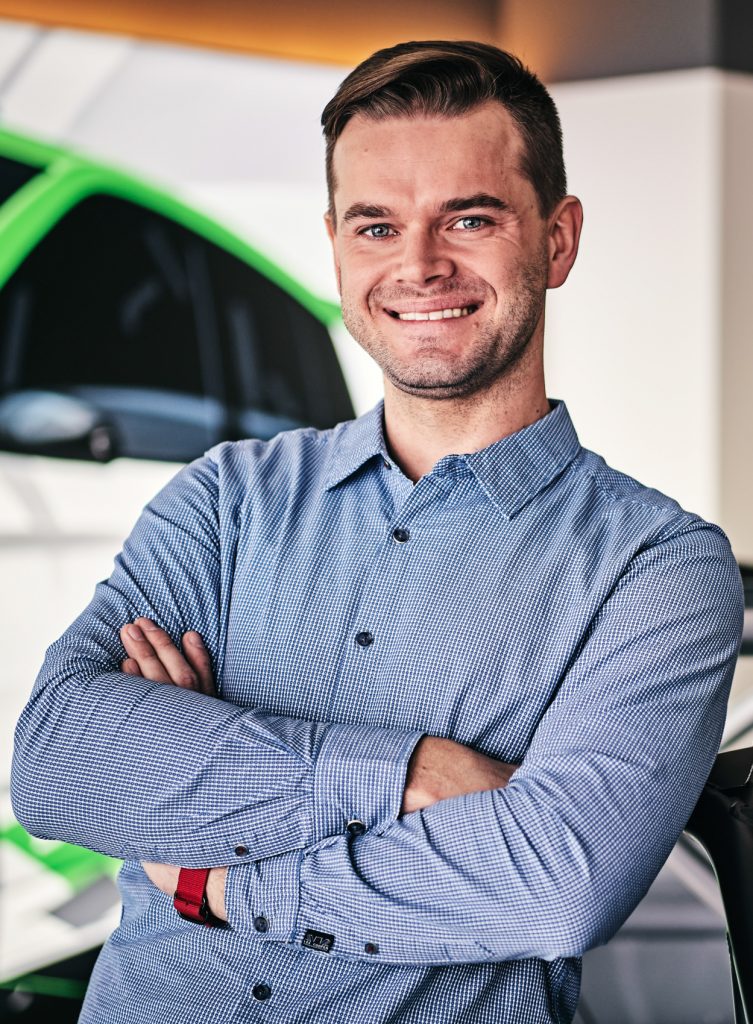 Is it possible to describe the typical ŠKODA FABIA Rally2 customer?
Most often it’s the big teams that have several cars and rent them out to their customers. There are five such companies among our clients, but they make up the majority of our business. They are Printsport Racing in Finland, 2C Competition in France, BRR Baumschlager Rallye & Racing in Austria, Eurosol Racing Team in Hungary or Wevers Sport in Netherlands. Those are really large clients with whom we have long-lasting relationships. You could think of them as small factory teams, as they even have their own spare parts warehouses. Our largest customer when it comes to the number of cars sold is Printsport, who have already bought more than 20 FABIA Rally2 racecars. On the other end of the spectrum you have the individual drivers with one car, who take part in national and local championships, care for their own cars. During the week, they work in the ordinary car service or something like that.

The ŠKODA FABIA Rally2 is a bestseller. How did your support develop along with it?
The ŠKODA Motorsport customer programme was created alongside the FABIA S2000 project, during which we sold 63 cars - and the interest is still huge. Of course, such growth had to be reflected in our capacity, whether for space or people. Currently, the ŠKODA Motorsport headquarters include 3,844 m2 of production and storage facilities. One of the reasons for the increased space was to increase of the amount of spare parts available – at any moment, we have more than half a million parts in our inventory. We also needed to increase our office space a bit. Once, the whole customer programme was run by two or three people, now there are around 15 - and a lot of others take part in supporting customers. Putting it simply, in order to cooperate with 129 teams around the world, we need more of everything than ever before.

How do you manage taking care of so many customers?
First of all, we try to keep a compact, stable team, because we build on personal relationship with the customer. Each salesman communicates with the same teams, he knows their history and knows what’s happening in their region. It may be quite surprising, but our main means of communication is currently WhatsApp! Our customers are not a big fans of e-mails, as they are often working on their cars. They just take a picture of the part they need, or a video of their problem, and we take care of it immediately – during weekends or nights, 24 hours a day. We are able to send the parts the same day. Rallying never stops, so our customers have to be as flexible as possible and we try to accommodate them. We never want to leave them hanging, and that’s one of the reasons they come back to us.

“It’s in our interests for our customers to do well, for their cars to finish and, if possible, win.”

While we’re talking about it, how do you order parts for a rally car?
To make it easy to order spare parts, we have developed our own catalogue. It’s an app which works both online and offline, so the teams can download it and use it even in places without an internet connection. Visually, it represents the whole car broken down to the last part. The customer can easily mark the selected parts and send us a precise order. If a whole assembly is ordered, the system checks that nothing is missing from the order. At the same time, the catalogue serves as a service manual, where the customers can find tightening moments for nuts and bolts, technical diagrams and so on. It’s an absolutely unique service; we don’t know of anyone else in the rally world who uses a system on a similar level.

You also advise the teams before individual rallies. How does that work, exactly?
Yes, we do. And it’s a fairly sophisticated thing. We have a huge database of rallies where our works team or our engineers have taken part in the past, or we do our own research. If we haven’t been to a rally before, our car engineers will find some onboard videos and compare the car’s behaviour with the average temperatures and speeds at various parts of the stage and so on. Sometimes they spend days on this data and they use their analysis to make recommendations for the settings of shock absorbers, differentials or the gearbox. For teams, it’s great because they don’t have to start from scratch and they can just fine-tune things during the pre-rally test. This information is supplied as a paid service if the customer requires it, or, in the case of bigger rallies, attended by several our customers, we supply them for free to everyone. It’s in our interests for our customers to do well, for their cars to finish and, if possible, win.

Is it possible to request ŠKODA Motorsport assistance actually at the rally?
Of course. We offer the services of an engineer who will take the team through the rally from A to Z. First, he analyses the whole event, including the non-race stuff like the technical rules and inspections. He recommends not only a suitable setup, but also which spare parts to take to the rally. At the rally, he’s able to assess the mechanics and the crew, and recommend any changes needed to the team’s use of driving data to improve the driver’s driving style. He can advise him where he’s braking too much, shifting at the wrong points and so on. During the rally itself, he’s practically in charge of the team of mechanics, decides when to replace parts, analyses the weather or advises with the tyre choice. He basically becomes the technical head of the team.

Is this service in demand?
Extremely so. The ŠKODA FABIA Rally2 has been on the market for quite some time, the teams have reached a high level, the competition is huge and every detail matters. Even seemingly small things can bring a better result, and advice from the factory engineer represents one of the ways forward. It allows the team to let go of many things, as they have a person with the latest information on hand. For example, before Rally Mexico, our people spent a whole two weeks on location, and we have agreed on year-round cooperation with some teams, like Pontus Tidemand or Kajetan Kajetanowicz. If this kind of cooperation is continuous, it obviously has a much bigger effect.

“Our salesmen have to know the car down to the last detail, so they know which components were modernized and can advise our customers.”

Is it a paid service, or do teams get it with the car?
This service is paid, but at selected WRC and ERC rallies, we have engineers who take care of free support for all the teams using ŠKODA cars – a technician and an engine specialist. The technician visits all the teams, watches their car perform, gives advice with problem solving and points out new improvements. The engine specialist downloads the data from the engine’s control unit and checks whether the power plant is running right, or if he can suggest changes to the settings. And, because not everyone speaks English, they are able to communicate in other languages, like Italian or French, as well. Once again, this is part of our philosophy of having personal contact with our customers, keeping them satisfied and helping them finish every rally.

Do you help the teams with ongoing improvements to their cars?
Of course. Our car is under constant development and we are trying to move it forward from the standpoints of performance, weight and safety. From time to time, we replace or improve some components. We put out a technical bulletin each time, which describes the changes in detail. In line with the FIA rules for Rally2, there are a lot of parts that come from stock ŠKODA cars, and if they change, we have to react. Some replacements are mandatory, as they have an effect on homologation; some are voluntary, but useful. Our salesmen have to know the car down to the last detail, so they know which components were modernized and can advise our customers. We also develop and manufacture our own accessories, like our state-of-the-art car jack – which is actually used by our competition in WRC!

Do you also supply information for the crews?
Drivers and co-drivers have our official handbook in their phones, which is continuously updated. They can use it, for example, to find instructions on how to set up electronic systems, differentials or how to replace the shock absorbers. If they have to replace anything during the transport stage, they can have a quick look at what’s wrong with the car and what to do.

How the car works during the rally, and its setup, is one thing, but ŠKODA Motorsport also provides large service jobs like engine rebuilds, right?
Exactly. We build the engines ourselves, as we want to have the heart of our car under our control. That’s also the reason that we do rebuilds of customer engines. After 3,000 kilometres in rally, you need a “small rebuild”, which includes changing parts of the timing gear and rotating assembly – piston rings, seals, bearings, nuts and bolts. The engine is taken apart completely, and it’s also tested on a dynamometer to measure the power and resistance. After 6,000 kilometres, it goes for a large rebuild, where a lot more parts are replaced – the result is a 95% new engine, including the block, head or crankshaft. However, if you realize that the whole Czech Rally Championship, for example, is around 1,000 hot kilometres, you see that a car could go two seasons, including testing, without so much as a rebuild.

“The number of instances where our customer car doesn’t finish because of a technical problem is really low.”

Other parts can be serviced by the teams themselves?
Currently, ŠKODA Motorsport offers, in addition to engine rebuilds, rebuilding the shocks or gearboxes, or training to service them properly. When it comes to a gearbox service, our customers can also use our partners in various regions, who we’ve selected, trained and certified.

FABIA Rally2 boasts above-average reliability. How much do you care about properly servicing the customer teams?
The number of instances where our customer car doesn’t finish because of a technical problem is really low. For the works team, the percentage of retirements caused by technical problems is almost zero, and private teams are not that much worse. We are trying to pass on our know-how and educate our customers in the proper care of their cars. It’s mostly about prevention and precise servicing, although it’s also important to follow all the proper stages. And I have to compliment them, as they follow our instructions and in a large majority of cases, they do a great job of keeping the car in top shape. Their feedback also helps us to improve further.