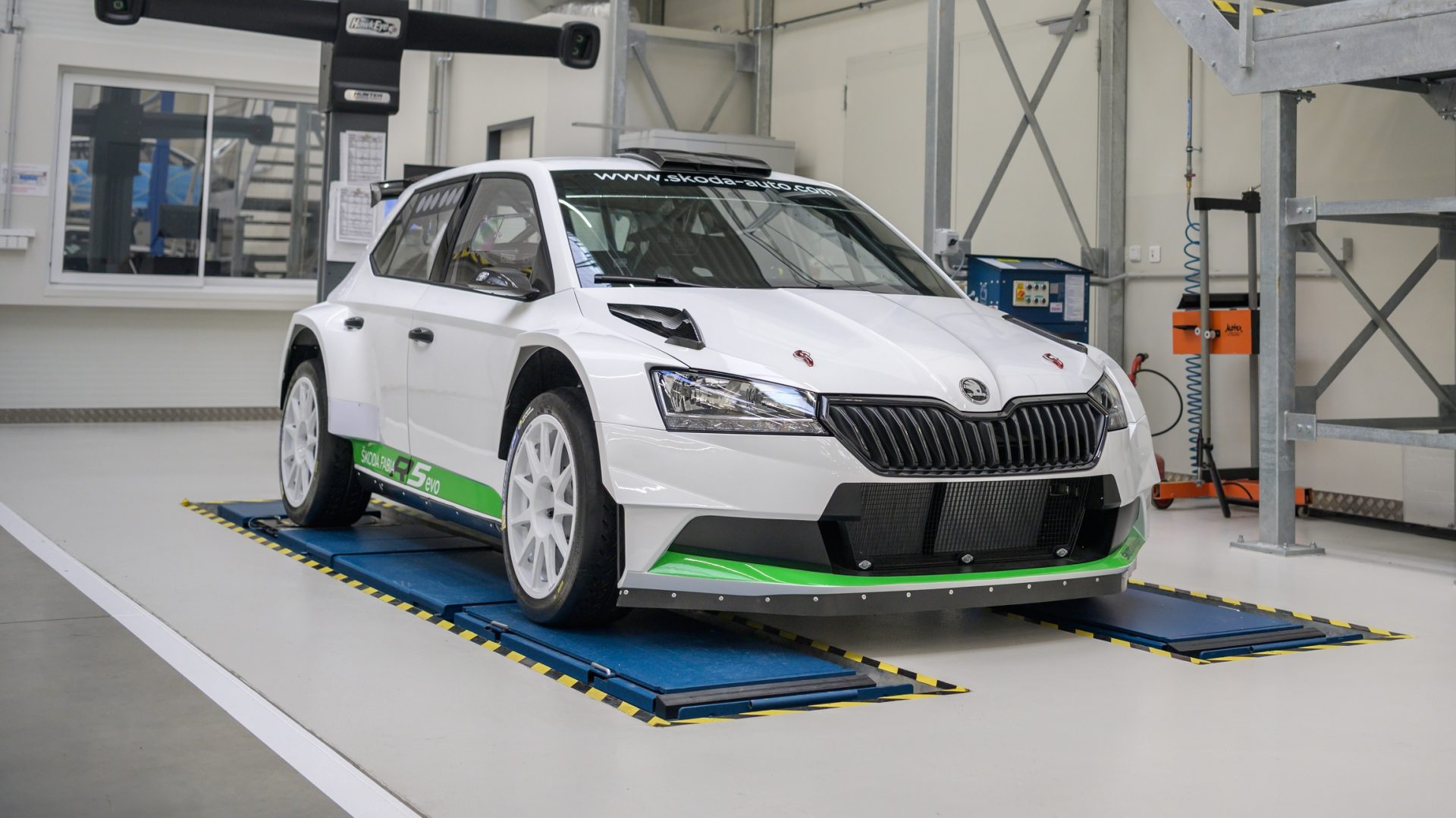 10 Most Important Changes In The ŠKODA FABIA R5 evo

Recently, we taught you to spot five differences between the first version of the ŠKODA FABIA R5 and its modernized version, called the evo. The most important changes, though, are hiding beneath the hood – they affect the engine, gearbox, cooling or suspension. “I like the car’s design, but overall, I don’t care much whether it’s green, gold or pink. What’s important is how it works”, stated last year’s WRC 2 champion Jan Kopecký, after his first rally with the revamped car.

The development of the FABIA R5 evo started at the end of 2017 and it took about one and a quarter of a year until homologation. This timing wasn’t by chance. The FABIA R5 first appeared in 2015 and FIA rules allow the homologation of a new rally car after four years, based on the same production car. The first generation had already used all 12 of the “jokers” that allow manufacturers to change one component from the original specification. The new homologation was the best (and only) solution to continue improving the performance, reliability and safety of the car, keeping it at the top of the R5 category.

During development, the car did around 10,000 test kilometres. To test the gravel setting, well-known tracks in France, Germany, Greece and Finland were used. The tarmac set-up was mostly tested home in the Czech Republic, but German, Italian and French roads were used as well.

So, what’s changed when compared to previous years?

The suspension travel has been increased in both set-ups, tarmac and gravel. In both cases, the travel is increased by 30 millimetres both front and rear. This change helps to improve the car’s traction, which is especially helpful under extreme conditions.

Throughout the whole car, the engineers strived to make selected parts lighter and moved the saved weight to the places where it’s most beneficial, according to computer models. This helped lower the centre of gravity and find a better balance on both types of surfaces.

Compared to the previous version, the cooling system of FABIA R5 evo has a new radiator which, together with the more efficient cooling fan, provides a cooling effect of forced cooling which is about 15% stronger and, at the same time, lowers the electric energy consumption by a third. The fan is also lighter and smaller, so the mechanics have more room to work in the engine bay. The new coolant reservoir also allows you to increase the cooling system pressure to 1.6 bar, which in turn increases the coolant’s boiling point. In addition, flushing the system is now much faster.

Using an electric water pump in the completely reworked cooling system helps optimize the coolant flow, keeping the engine to a more stable temperature cycle under various conditions. This is important for an optimal fuel/air mixture preparation, a reduced tendency to knock at low engine speeds and to stabilise the engine’s friction. At the same time, the electric pump makes it possible to reduce the engine’s friction losses.

The goal of many of the partial changes was to increase the engine power in both static and dynamic operation. For example, the new electric control of the turbocharger waste gate allows for quick reactions to changes in operating conditions, especially after a gearchange. The regulation of the air pressure in the intake manifold is now much more effective as well. The car also has a new ECU (Electronic Control Unit) with increased computing power, a dual core processor and new software. Depending on conditions, the maximum power output is increased by approximately 2 kW – but this isn’t very telling figure in a rally car. Much more important is the dynamic power output to the wheels, a figure that describes the powertrain’s overall output. The comparison tests show that the FABIA R5 evo is faster than its predecessor in real-life conditions, a feat that is partly achieved with the new gearing. The gearchange is also faster.

The steering now has faster gearing for quicker reactions. The newly designed handbrake doesn’t require as much force and the force required to control the accelerator pedal has been optimized as well. All of this makes the car’s handling easier. The new cockpit is fitted with a larger display which has better resolution and a clearer layout of important information.

The Brembo brake system was replaced with a new one, manufactured by Alcon. The goal of the new setting is to offer the ideal ratio of top performance and long-term efficiency.

Thanks to new oil pump regulation, a marked improvement in oil pressure stability has been achieved, along with a reduction in the power consumption of the oil pump. This results in more stable pressure in the lubrication systems during rally operation.

Throughout the car, changes have been made to make it more robust. The reinforced components include half-shafts and a sturdier exhaust manifold which is less prone to heat deformations. The engine is fitted with new sensors which combine longer service life and lower cost (e.g. oil and coolant temperature sensors, turbocharger speed sensor). Also reworked is the centre tunnel and chassis mounts. Safety is improved with a new rollcage, designed to conform with the FIA standards for 2019, stronger seat mounts, a redesigned fuel tank and bigger door panels made of new materials.

Based on an analysis of timing gear operation, a new valve spring with decreased operating forces was designed. Its progressive setup reduces the forces in the timing gear, thus lowering the engine’s friction losses. The momentum and friction in the clutch and flywheel were reduced as well. Optimized calibration of engine maps in transport stage mode also helps to reduce fuel consumption and thus also the amount of fuel needed for the transport stages.
Answers prepared by: Aleš Rada, rally car engineering chief responsible for testing and development, and Andrea Hlaváček, chief of rally engine development and quality