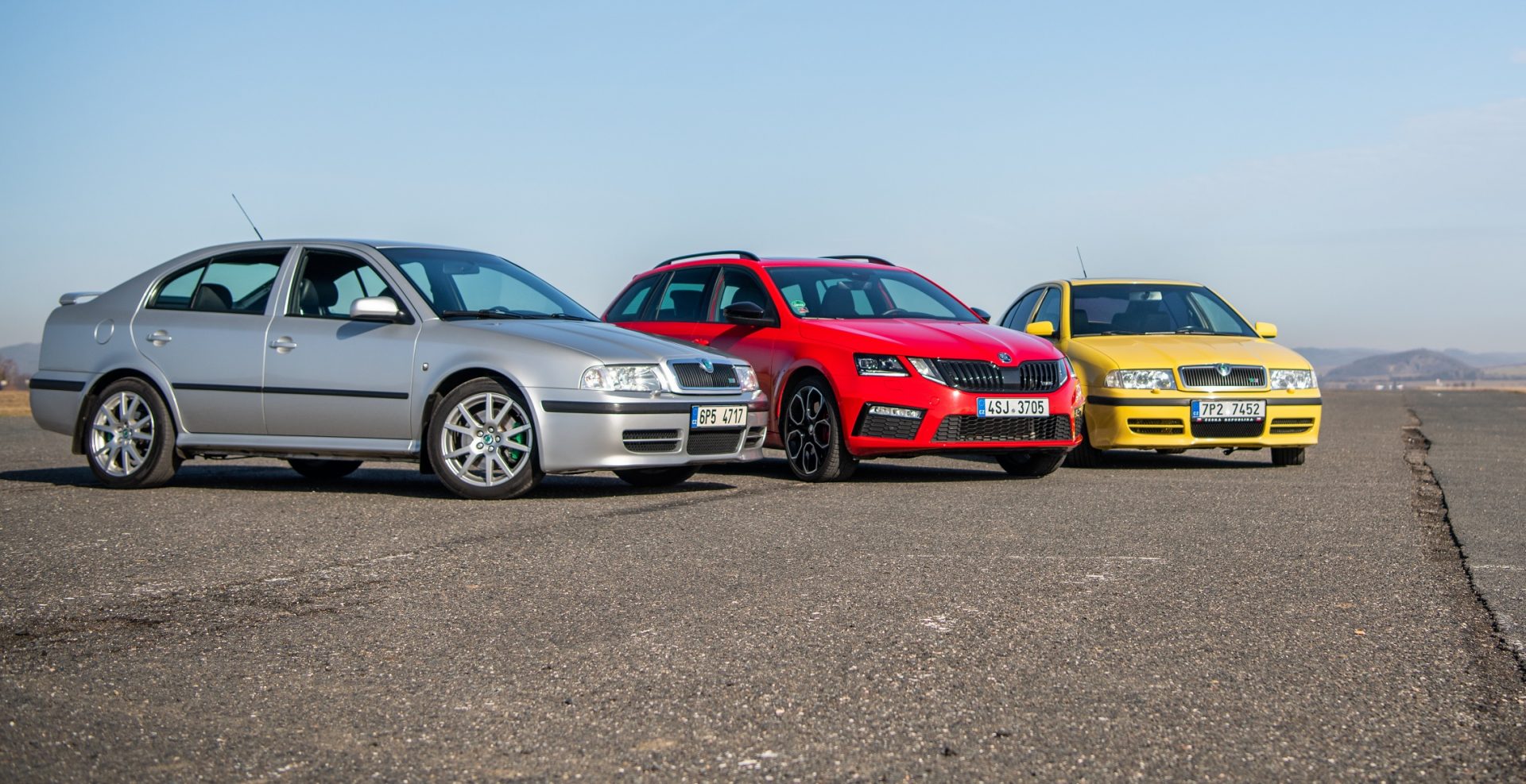 A Meeting of Generations: OCTAVIA RS

When the OCTAVIA WRC first appeared at the season’s opening WRC round, the Rallye Monte Carlo, with Armin Schwarz and Pavel Sibera behind the wheel, rumours quickly began to spread about a fast civilian version. That came soon after and it quickly gained popularity. How does the ŠKODA OCTAVIA RS drive after almost 20 years? A comparison with the current generation will show!

At the beginning of the century, the speed of the ŠKODA OCTAVIA 1.8T seemed peerless. The 150 horsepower engine managed to cut the 0-100 km/h time by more than 2 seconds. Everyone thought that OCTAVIA couldn’t fit anything more powerful under its hood. They were wrong. When they introduced the facelifted model, ŠKODA added the RS version with an even more powerful turbocharged engine. With 180 PS, the acceleration times fell by another 0.5 seconds and broke the eight second threshold. A legend was born.

The looks were important, too. OCTAVIA RS’ ground clearance was 15 millimetres lower, a difference that was apparent at first glance. In a way, it was similar to the WRC version in its tarmac setup. Also new was the massive front bumper with triple air intakes, the large hexagonal tailpipe and the small, restrained spoiler on the tailgate.

The 1.8T/132 kW is notable for several interesting technical features. For one thing, the cylinder head has three intake valves and two exhaust valves per cylinder. The advanced five-valve technology was, at the time, used only by Ferrari in its naturally aspirated engines. Another novelty was the variable valve timing, using a chain that connected camshafts to a hydraulic tensioner. The system was borrowed from the 3.0-litre four-cylinder engine in the Porsche 968. The engine is also well-known for the durability of its cast iron block, with an aluminium head and a turbocharger connected to the engine’s cooling circuit.

Behind the wheel of the first generation, the 180 horsepower is a thrilling experience, even though the original’s engine is tuned quite softly when compared to the current model. Under 2,500 rpm, it seems like you’ve left the turbocharger at home. The engine only really starts to breathe, with a whistling turbocharged soundtrack,when the rev counter needle approaches three thousand. Only then do you start to believe it’s got the power.

The direct-injected 2,0-litre engine in the current OCTAVIA RS is much sharper, thanks to the higher compression ratio. The turbocharger’s onset is not so noticeable, because it’s got a linear torque curve almost from the idle. From 2,000 rpm up, the engine is taking in enough air under full throttle to allow you to overtake easily. Put simply, the current RS goes like a rocket anywhere between 2,000 and 6,500 rpm. The latest generation of TSI engines is unique in this respect, as no other turbocharged two-litre engine revs with such a compelling combination of ease and power. It feels like it’s got no inner friction at all. To make things even better, the power of the 245-horsepower version is easy to modulate.

The “one-point-eight” is a much more supple, sedate old-school engine. It’s a bit like a drowsy bear that you have to poke with a stick to make it crawl out of its warm, cosy den. With a five-valve head, the engine needs more revs to provide optimum power than the modern-day TSI. However, the 5-speed mechanical gearbox with long ratios turns revs into speed at a great rate. The first-generation RS is able to reach 120 km/h in second gear and 170 km/h in third. The driver’s enjoyment is amplified by the precise and smoothly mechanical operation of the gear lever, which is upholstered in soft, perforated leather.

The suspension of the older car takes its time as well. In its day, it was considered quite stiff and very precise, but compared to the current RS, it feels soft and supple. Entering the corner, the liftback rolls surprisingly soon, moving its weight over the outer wheels. If you’re used to the shorter suspension travel of today’s cars, it may disconcert you a bit, but in the end, the car musters a lot of grip. The red estate rolls much less, allowing you to get a better feel for the tyres’ grip. The VAQ front differential with its electronically controlled slip plays a big part in making the front end more focused. It works really well and keeps the front wheels planted during hard acceleration.

Even with its long rear overhang, the car is very planted and fast in sweeping corners. It’s this stability and clean, smooth speed that can make the third-generation RS feel a bit detached, compared to the first generation. This is down to the more effective operation of the more advanced dampers. The car’s stability makes you go faster and faster, moving the threshold at which you start to feel the suspension moving around and the weight shifting. This is probably the most substantial difference between the new car and the 20-year-old one. Firstly, the OCTAVIA RS is more robust and at the same time softer, with somewhat portly reactions. This makes the drive more adventurous than in the new car. The facelifted third-generation car feels like it’s some 200 kilograms lighter from behind the wheel, which makes it much sportier, with sharper response from both the engine and suspension.

Another noticeable difference between the two cars is balance. The estate has a bit of an unsportsmanlike advantage here, as it settles into corners in a balanced fashion, putting both axles to work. The first generation is much more about the front end, with the rest of the car flailing behind a bit.

20 years of difference, but the basics remain

The biggest takeaway from this drive is that 20 years of development is an age of difference. The new car is much sportier and faster. Still, both cars retain the same DNA even with a gap of twenty years between them. Both the first and third generation of the OCTAVIA RS are designed to never bother the driver with their sharpness. They serve it up in a very civil way, even though the numbers on the speedometer may sometimes surprise you.