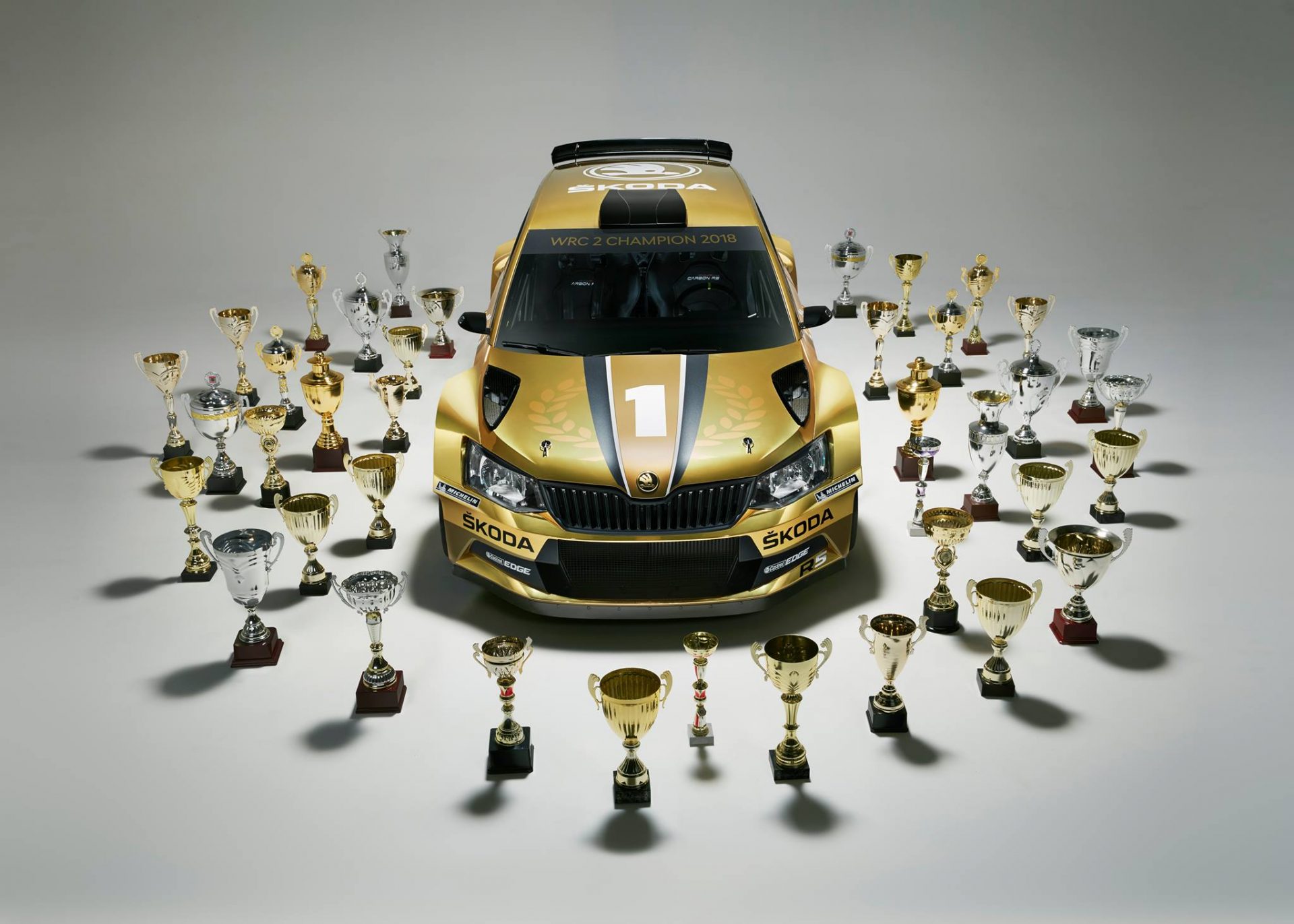 Our Early Christmas Presents: Titles Around the World

One of the most interesting things about Christmas celebrations around the world is who actually delivers your gifts. Nowadays, Santa Claus is probably the most popular gift giver worldwide, but there are others: Father Christmas, Père Noël, Saint Nicholas, Baby Jesus, Grandfather Frost or even the Christmas Goat, they all bring presents and joy to children at Christmas time.

At ŠKODA Motorsport, though, we have our own set of gift-bringers. Instead of sleighs and reindeer, they have FABIA R5s and horsepower. Their gifts don’t come wrapped in pretty paper, stuffed in a sock or placed under the Christmas tree. Their presents are victories and titles from rally championships all around the world. They are our champions and this year, we’ve received more gifts from them than ever before. We’ve introduced all of them in recent weeks, but now is a good time to remember them all.

This young Russian driver seems to be at the start of a great career. This year, he scored his first title in junior ERC championship and seems poised to continue in a big way!

Since 2011, Gustavo Saba dominates the South American rallying scene. Besides another win in Paraguay championship, he added another one from the continental CODASUR series.

In the Asia-Pacific championship, ŠKODA has a long history of dominance. This year, Yuya Sumiyama added both drivers’ and constructors’ title to the long line of successes.

Last year, he scored the first rally victory for ŠKODA on African soil and continued on to take the continental title. This year, he repeated his success. Will 2019 mark a hat-trick?

In 2016, he won the French Tarmac Rally Championship – remarkably without winning a single rally – and this year, he added a title from its gravel counterpart.

He’s been rallying since the turn of the century and for a long time, it seemed he would be always second. This year’s switch to a FABIA R5 brought him his first title.

In the four years he’s been driving a ŠKODA FABIA R5, Hermen Kobus has managed to significantly improve his results. This year he added his first Dutch title, after driving a perfect season.

He is already a legend in his home country, having won Polish title in 2016 and four Slovak titles. His road to title in 2018 wasn’t smooth, though, with two hard competitors in the way.

Not only did he win the Cyprus Rally Championship with a clean run of four rallies, he also became the first Cypriot in at least a decade to win the prestigious Cyprus Rally.

After 20 years in his home country, Krisztián Hideg found that sometimes you have to move abroad to find success. He claimed his first title in Croatia.

A new rally series needs some great drivers to attract attention and gain prestige. Giandomenico Basso and his FABIA R5 are doing this for the new TER series.

Rally may seem like a sport for the young, but Miroslav Angelov and his near-perfect season in Bulgaria prove that that’s not always the case.

When a legend leaves the championship, it can result in boredom. In Belgium, it ended up in a stunning battle between two great drivers.

He’s been active in rallying for over 20 years, but the last two seasons were his best – maybe thanks to the switch to a ŠKODA FABIA R5?

Another long-time legend of the sport, Dan Girtofan claimed his third title in Romania and even managed to reach the finals of the European Rally Trophy.

All Scandinavian rally championships are hard and Sweden is no exception. Winning two of the gravel rallies was a feat in itself, leading to well-deserved title.

The third title in Australian Rally Championship is a proof that Eli Evans is a true talent. Although his begun this year’s season with a Mini Countryman, he finished most of it in a FABIA R5.

Once again, this year’s Lebanese Rally Championship was won by Roger Feghali who is, together with his brother, a legend of rallying in Lebanon and surrounding countries.

Spain is among the countries that have different championships for tarmac and gravel. And Xavier Pons took his FABIA R5 to the victory in the gravel one.

You can find ralllying even in the most exotic and remote places. Like Mauritius, where a FABIA R5 took local rallying ace, Rajesh Ramdenee, to the victory.

Another small island in Indian Ocean, another gold for FABIA R5. Thierry Law-Long took the first place in the rally championship of one of the most remote parts of EU, French overseas territory of Réunion.