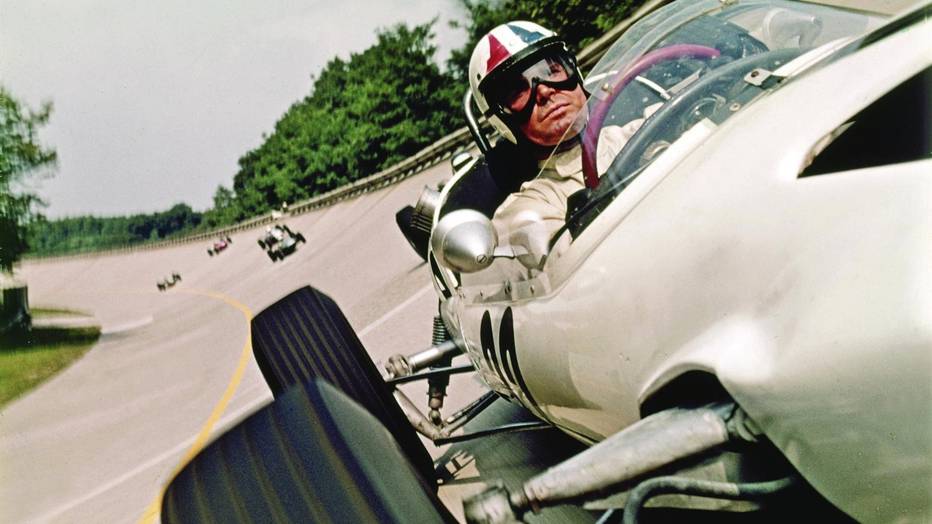 When the subject of racing movies comes up, what’s the first one that pops into your mind? For many people, it’s Steve McQueen’s Le Mans. Younger motoring fans may recall the more recent Rush, which tells the story of Nikki Lauda and James Hunt. There was, however, a film that came long before Rush – and half a decade before Le Mans. And when it was new, it really made a splash.

This epic film, with a running time of almost 3 hours, was directed by John Frankenheimer in 1966 and for many enthusiasts, it’s still the best racing movie ever made. We could almost say that when it comes to motorsport films, people are divided into two camps – those who prefer Le Mans, and fans of Grand Prix.

There are several reasons for Grand Prix’s popularity. Besides the fact it covers a season in the most prestigious form of motorsport, it also features obsessive attention to detail. Frankenheimer took great pride in making his film as realistic as possible, and his high demands resulted in a rarely seen level of accuracy. For example, there’s not a single shot in the movie that has been speeded up, because Frankenheimer was convinced that even your average moviegoer would be able to tell. The technical consultant for the film was none other than the great Caroll Shelby.

The film’s story is about four fictional drivers and their fight to be Formula 1 world champion. They are Scott Stoddart (played by Brian Bedford), Jean-Pierre Sarti (Yves Montand), Nino Barlini (Antonio Sabato) and Pete Aron (James Garner). Originally, Steve McQueen was considered for the role of Pete Aron, but the director finally went with Garner because he thought that McQueen wasn’t showing enough interest. In fact, McQueen was so angered by the refusal that he didn’t speak to Garner for several years.

Not all the characters are fictional, though. As five of the six races were shot during real racing weekends, there are a lot of genuine motorsport personalities in the film. You can see Jimmy Clarke, Jackie Stewart, John Surtees, Juan Manuel Fangio or Jack Brabham.

The only race for which the shots of real action were not used is the last one – the French GP. The scenes of this race were actually shot in Belgium, but it’s the only exception. In all the other racing sequences, the scenes from the pits and backstage were shot “live”, to the chagrin of many real racers, who considered the presence of the film crew distracting. Most of the racing scenes featuring actors were shot a few days after the races had taken place and the production had rented the tracks. Sometimes – for example, in the scenes featuring the Monaco and Belgium Grand Prixs – real racing footage was used.

In order for the actors to look convincing behind the wheel, all the leads took racing lessons from Jim Russell. Brian Bedford struggled with shifting, and 1961 world champion Phil Hill ended up standing in for him. This is why the character of Scott Stoddart has a scarf around his face in every race.

Phil Hill’s driving skills were essential to the shoot. Hill drove the camera cars, equipped with remote-controlled cameras, a great innovation at the time. Two camera vehicles were used, an AC Cobra roadster and a Ford GT40 prototype with a camera mounted on the front bonnet. Some scenes were also shot from a helicopter. Background projection was never used; every scene with an actor behind the wheel is real.

Overall realism and perfect editing were Frankenheimer’s goals. There are several points in the movie where two scenes run in parallel. Such a simple trick will hardly impress anyone today, but in the mid-60s, it was a huge innovation. Another innovative aspect of the movie is the fast editing in the action scenes. The average length of a shot is just 5.4 seconds.

It might seem as if no costs were spared during production, but in fact the studio coffers weren’t bottomless and some ways of saving money had to be found. Apart from the footage of actual races, no real Formula 1 cars appear in the film. Instead, Formula 3s modified to look like the faster formula cars were used. Shooting the start of a race required the cars to burn rubber, so the film crew would douse the tyres with petrol to make them spin more and create smoke.

Grand Prix isn’t just about details, however, but about the whole picture. The film provides a clear view of the simpler, “grass-roots” days of top-level motorsport. It combines state-of-the-art footage with stories of rivalry and interpersonal relations during the season. There are some memorable quotes, some very convincing crashes, a bit of a romance and, of course, the inevitable death. If you have already seen Le Mans and think that racing movies can’t get any better, give its predecessor a try. Maybe you’ll find a new champion