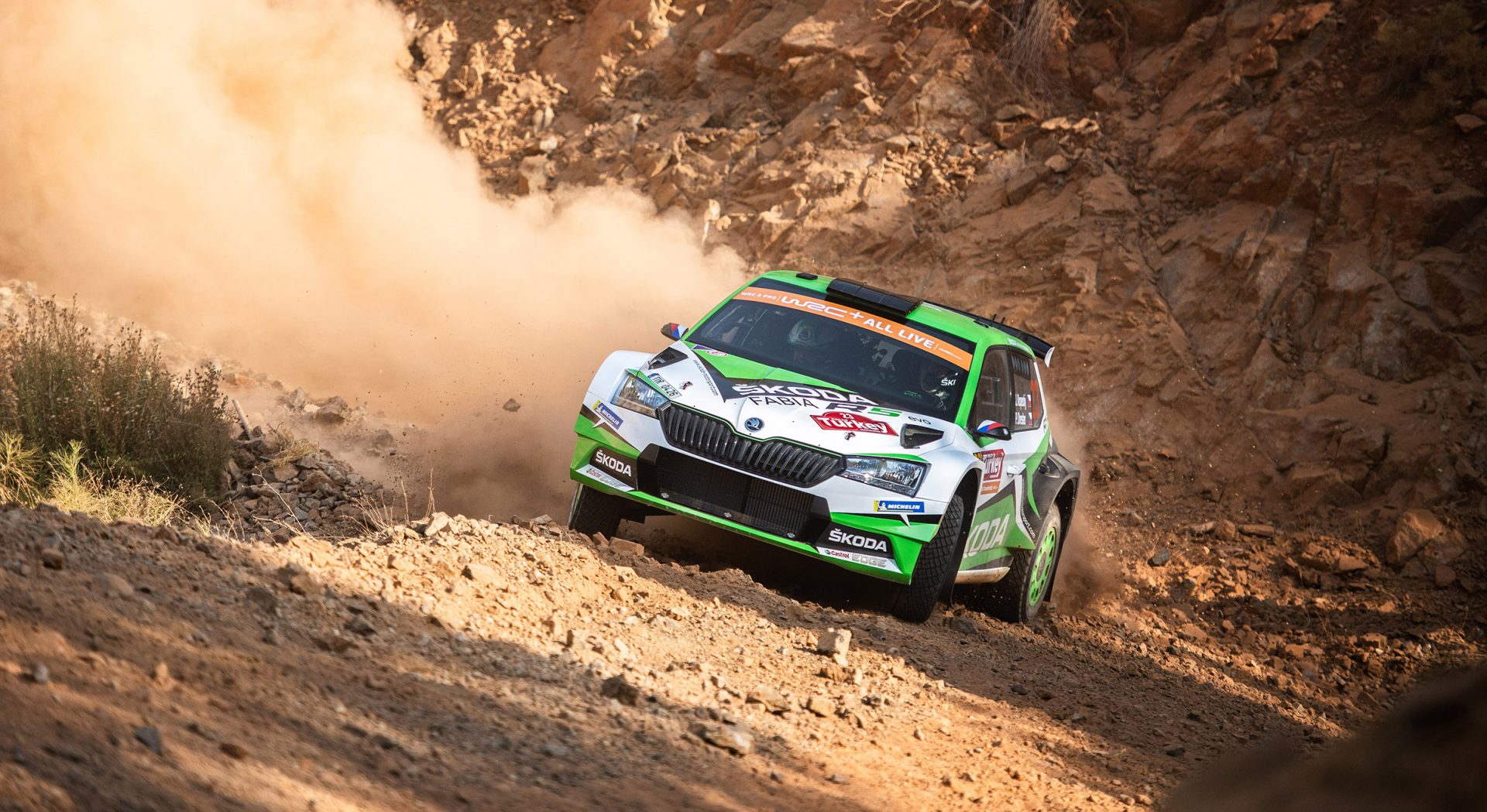 Last year’s Rally Turkey was literally a survival game. This year, some of the tracks are in a bit better shape, but from the first impressions it seems that the cars’ durability and luck in avoiding punctures will once more be the decisive factor. The combination of the extreme heat and low speeds, which cause problems with cooling, will also put an extreme strain on engines and brakes. Read more about all the challenges facing the crews in Turkey this weekend in our summary article.

Here, you can watch the current news and results during the whole weekend. The content will be updated continuously until Sunday.

In Thursday’s shakedown, both ŠKODA Motorsport crews decided to save both cars and tyres. Jan Kopecký with his co-driver Pavel Dresler, as well as Kalle Rovanperä with Jonne Halttunen took just one run on the shakedown each. Even so, Rovanperä posted the second best time in his class, bested only by Gus Greensmith with the new Ford Fiesta R5 MK2.

In the evening’s super special stage, though, the Finnish crew wasn’t going to give up the victory. With the time of 2:06.9, they even managed to beat several more powerful RC1 cars. And thanks to great times posted by Kajetan Kajetanowicz, Fabio Andolfi and Jan Kopecký, ŠKODA FABIA R5 and ŠKODA FABIA R5 evo cars took first four places in the RC2 class. In the WRC 2 Pro classification, Gus Greensmith finished third, behind Kopecký and Rovanperä.

Right in the first stage of the Friday’s leg, it became obvious why Rally Turkey is so dreaded by teams. Kalle Rovanperä with Jonne Halttunen suffered first puncture soon after start, which caused the young Finn to lose his focus and roll the car. However, his ŠKODA FABIA R5 evo proved its durability and managed to continue without any significant damage. Still, it meant almost four-minute loss. Meanwhile, Jan Kopecký and Pavel Dresler posted the fastest time of RC2 class, 1.5 seconds ahead of Kajetan Kajetanowicz and 4.2 seconds ahead of Gus Greensmith.

The next stage, almost 40 kilometres long Cetibeli, wasn’t any more merciful. Rovanperä had to deal with another unexpected puncture, which, according to his words, came with no obvious cause. This forced him to slow down significantly, as he already used both his spare wheels. Still, it wasn’t enough. A big rock in the way and inability to replace a tyre for the third time left him with just two choices: retire, or try to go through the whole Ula special stage (16.57 km) with a flat tyre. Kalle and Jonne decided for the second option – and they really made it to the finish! But FIA rules require four functional tyres for transport stages. That was solved by saving one of the punctured tyres, which had only a slow air leak, but unfortunately, it didn’t survive the trip to the service zone and courageous stunt couldn’t be finished.

Kopecký finished the morning in first place of the WRC 2 Pro classification, almost two and a half minutes ahead of Greensmith who, like many other drivers, did not avoid puncture. The first four places in RC2 were held by ŠKODA drivers, in the order of: Kajetan Kajetanowicz, Jan Kopecký, Marco Bulacia Wilkinson and Henning Solberg.

In the afternoon, it was, unfortunately, Kopecký’s turn with bad luck, when he suffered a puncture as well. Still, he managed to finish the SS5 just 24 seconds behind Greensmith, who started to slowly shrink the lead of the Czech crew. Then, however, Kopecký suffered another puncture and had to drive very carefully to avoid his teammate’s fate – the fight for seconds turned into the fight for survival. In the end, the experienced crew managed to avoid the dangers presented by Rally Turkey and they finished the leg in the first place of WRC 2 Pro category, a minute ahead of Greensmith. In the RC2 class overall classification, they kept the second place, 41.5 seconds behind Kajetan Kajetanowicz.

The team’s mechanics had their big moment as well, when they put on a great show for spectators, repairing Kalle Rovanperä’s FABIA R5 evo. The car was heavily bruised after the Friday’s leg, but even after all the hits and many hot kilometres driven on a flat tyre, it remained fully able to continue. Even though Rovanperä and Halttunen received heavy penalisation after their problems in the morning, they at least stayed in the running thanks both to their perseverance and the effort of the whole team.

The Saturday started out great especially for Jan Kopecký and Pavel Dresler, when the marshalls reduced their time from the third stage by 20 seconds, as they had to drive in a cloud of dust behind a car that was bogged down by defect. Throughout Saturday morning, they drove very carefully to avoid mistakes and minimize the risk of more punctures. Before the mid-day service, Kopecký was keeping at the top of the WRC 2 Pro, more than a minute ahead of Gus Greensmith. In the RC2 class, he keeps the second place, 20.6 seconds behind Kajetan Kajetanowicz, also on ŠKODA FABIA R5.

The other works crew, Kalle Rovanperä and Jonne Halttunen, returned into the rally with repaired car and a new set of spare wheels. In the first three stages, which took place on notable better surface, they needed none of the spares and Kalle managed to win two stages and place third in the other.

Unfortunately, the endless series of unexpected defects continued in the second run of the Saturday’s leg. Without knowing where and how, Kopecký punctured a tyre in SS11 Yesibelde, losing two minutes of time. This prompted him to start pushing hard and he won the very next stage. Then, another slow puncture meant that he had to slow down once more. Meanwhile, Kalle Rovanperä continued his great drive and out of the three stages, he was fastest once, and second-fastest twice.

In the end, the Saturday’s leg ended up with Kopecký and Greensmith switching places. The British driver leads the WRC 2 Pro, a minute and 7 seconds ahead of the Czech crew. In the RC2 class, Kajetanowicz on FABIA R5 is still in the lead, followed by Greensmith, Kopecký, Wilkinson and Andolfi.

In Sunday’s final four stages, the Czech and Finnish crews performed in beautiful harmony. Twice, Kopecký and Dresler finished first, with Rovanperä and Halttunen in the second place, twice they reversed that order, not letting anyone else to the top. However, even that wasn’t enough to completely erase the losses from the previous days. In the end, Kopecký finished second both in WRC 2 Pro category and RC2 class, 29.4 seconds behind Greensmith. Still, after all the unpleasant surprises that Rally Turkey offered, the silver medal is a great result.

The WRC 2 category was utterly dominated by ŠKODA FABIA R5 – not even one car of competing brands managed to finish the extreme rally. The fastest was Kajetan Kajetanowicz, who switched to FABIA R5 specifically due to the challenging nature of Turkish tracks. Apparently, it was a good choice and once again, ŠKODA cars proved their reliability and ruggedness. The second was Marco Bulacia Wilkinson, followed by Fabio Andolfi in the third place. Behind them finished Henning Solberg, Burak Cukurova, Paulo Nobre and Diogo Salvi.

ŠKODA Motorsport boss Michal Hrabánek concluded: “This was clearly not the result we were aiming for – we didn’t win after some tire mishap. But we got valuable points especially for the manufacturers’ championship. I am satisfied that ŠKODA rally cars proved their legendary reliability on the rough gravel roads in Turkey!”