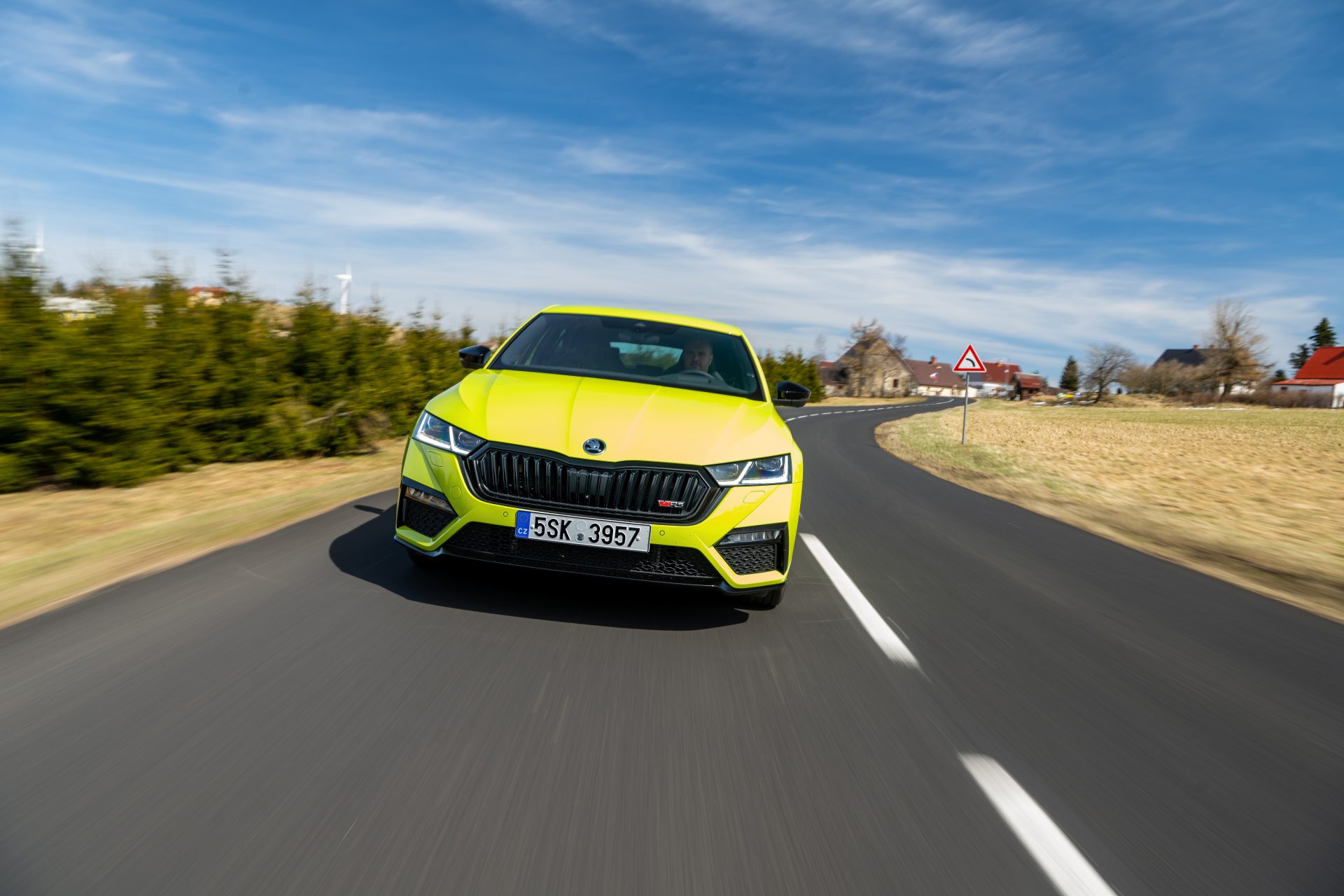 Just as rally drivers eagerly await the next competitive weekend full of special stages, weekends also have their own magic for enthusiastic drivers, because in the quiet of Saturday and Sunday mornings, we can enjoy our civilian cars on our favourite roads. The OCTAVIA RS TSI is perfectly suited for just such a drive.

The tradition of ŠKODA's sharper models dates back to the beginning of this millennium, when the company decided to offer its wealth of motorsport experience to road car drivers. The result was the OCTAVIA RS with a modified chassis, a distinctive rear wing and 180 horsepower. Its resemblance to the OCTAVIA WRC competition car, together with its captivating combination of speed and comfort, quickly won hearts of many customers who felt a bit like Armin Schwarz, Didier Auriol or Toni Gardemeister behind the wheel. 20 years on, the first OCTAVIA RS is still looking very good, and particularly well-preserved pieces in the limited WRC Edition are rising steeply in price.

After such a success, it's no wonder that every subsequent generation of the OCTAVIA has had an RS version. Although the character of the RS cars has been honed over time, its core has remained the same as the first generation. The OCTAVIA RS has always offered its drivers a very fast ride, no matter the quality of the asphalt you were driving on. In this, incidentally, it also resembled its WRC version. Its chassis was neither too hard to bounce off bumps, nor too soft not to be able to feel the work of the car's suspension in the steering wheel. In competition parlance, it worked on Spanish, Corsican and Croatian tarmac. Over time, the use of adjustable dampers and an electronically clamped front differential further expanded this range of functionality. This has made the OCTAVIA RS an extremely versatile car that is a joy to drive in any situation. And it's with this in mind that the garage is best opened on a Saturday morning, because you need a car that's a joy to drive.

If you don't have your favourite road right behind the house, never mind. In the comfort mode, the fourth generation of the OCTAVIA RS is a pleasant companion even on brisk motorway journeys. In this setting, the shock absorbers provide the crew with floaty comfort and at the same time excellent stability at higher speeds. The two-litre engine with a capacity of 245 hp, in turn, gives the car the necessary dynamics worthy of the RS designation. Compared to racing engines, it is tuned much more civilly, but it has a good pull already at low revs, where it benefits mainly from high torque. It does not lose its urgent power even at the limiting red field of the throttle, where the turbocharger still manages to supply a sufficient amount of compressed air. In addition, when driving quietly, the driver can reward himself with a very favourable consumption of less than 7 litres / 100 km.

On the winding mountain roads of the northern border of Bohemia and Germany, the engine is excellent. When switched to Sport mode, it feels like someone has injected a horsepower shot of adrenaline into the block. Just like a competition car, you can enjoy very quick responses to the slightest movement of the throttle, just as it befits a fun weekend drive.

The car's very good balance also deserves a mention. OCTAVIA has traditionally featured a voluminous luggage compartment that creates a relatively long overhang behind the rear axle. And it is the important piece in the overall excellent driving characteristics. Armin Schwarz already appreciated this specific feature of the OCTAVIA WRC: "It has always been a bit of an oversteerer, but it hasn't been tricky. It didn't bother anyone; it was simple and pleasant to drive. The OCTAVIA WRC was just fantastic to drive." Definitely don't expect the wild over steer of an all-wheel-drive rally special in the fourth generation. However, if you switch the stabilisation system to ESC Sport mode, the weight of the rear can be beautifully handled on corner entry. The rear will lighten up nicely and help the car to turn in.

In a corner, the OCTAVIA's revised geometry with its larger camber means that it rests firmly on the outside wheels and cleanly carves out exactly the radius you want it to. Very much like leaning into your carving skis. This makes it very easy to get the right rhythm in the turns on winding mountain roads. This is important for having fun behind the wheel on the road and then it also plays a key role in setting good times on the stage. Then all you have to do is sit back in the sports seats with integrated head restraints and enjoy every corner. It's the ability to corner precisely corner after corner that the fourth-generation OCTAVIA RS does better than any other RS in history. The motorsport genes are simply undeniable.

In addition to a brisk weekend drive, OCTAVIA, with all conceivable safety and assistance systems, is also the perfect companion for everyday family life. In addition to its speed and excellent handling, it adds a wealth of equipment and interior space that even cars a class above would not be ashamed of. So, are you looking forward to next weekend?