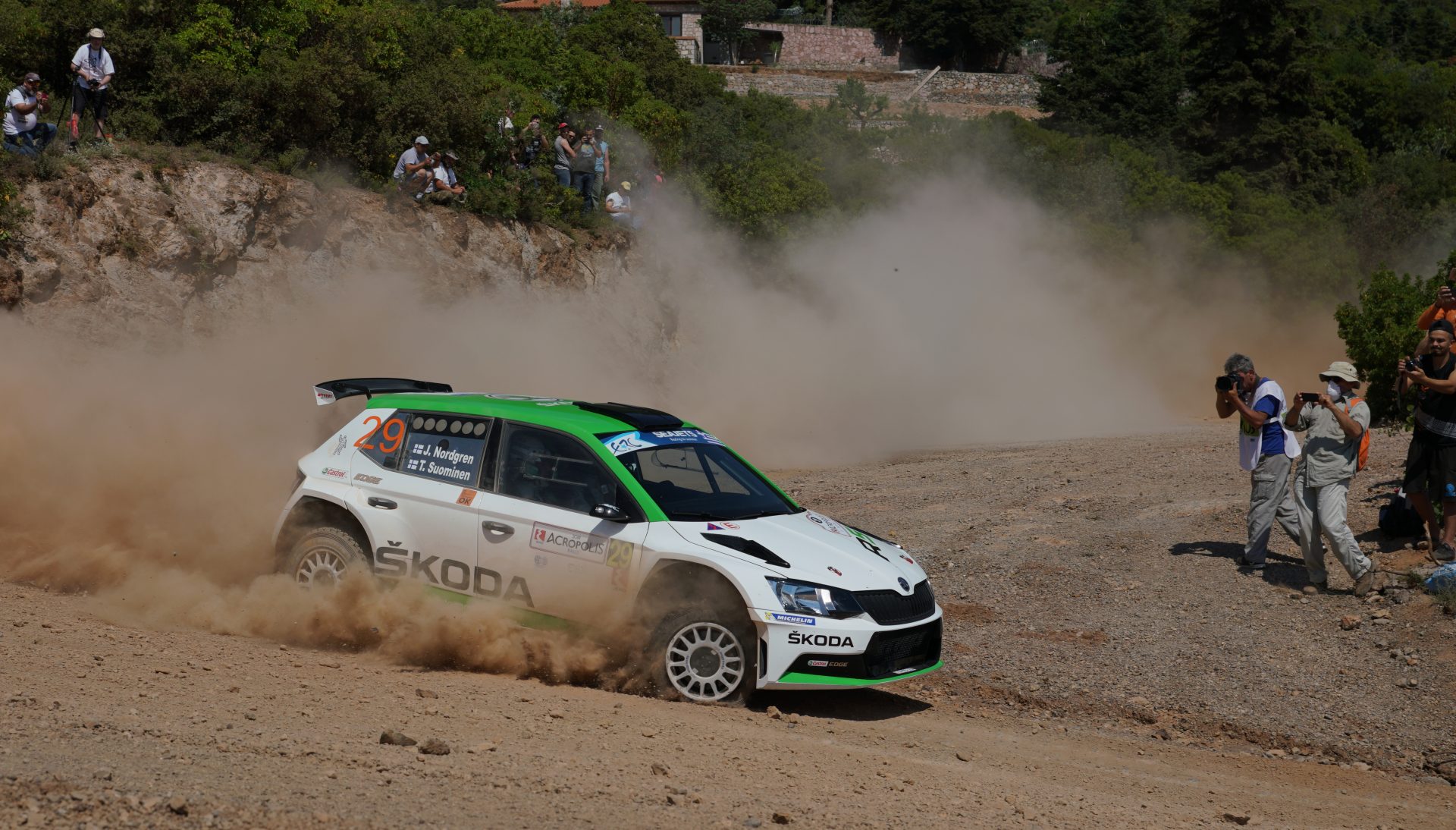 On the rough and rocky stages of Rally Acropolis, the Greek round of the European Rally Championship, FABIA R5s once again dominate the show. No less than fourteen ŠKODA-driving crews entered the rally on Friday and even though the extreme conditions of the rally, with tyre-killing rocks and dismal visibility due to massive clouds of dust, were really harsh on cars, ten of them is still in the game after the Saturday’s second leg.

Of those ten, eight FABIA R5s hold positions in the top ten, including the first four places, held by Bruno and Hugo Magalhães from Portugal in the lead, Norbert Herczig and Ramón Ferencz from Hungary in the second, Hubert Ptaszek and Maciej Szczepaniak from Poland in the third and local crew of Simos Galatariotis and Antonis Ioannou in the fourth.

As it happens in motorsport, though, not everyone was so lucky today. Juuso Nordgren, one of the ŠKODA works drivers, who came to Greece with a private car prepared by Wewers Sport, got a puncture 3 kilometres in to stage 3 and decided to mount two new tyres – but they were soft compound gravel ones. In stage 4, the hard surface destroyed two of his tyres and even though he made it to the stage’s finish on flat ones, he had to retire as he run out of spares (it’s only allowed to carry two).

The last stage of the day, SS8, brought troubles for another Polish crew of Grzegorz Grzyb and Jakub Wróbel, who broke the wheel on some stones and went from 3rd position to 6th – thus ending the 1-2-3-4-5 domination of FABIA R5s.

Under the Rally 2 regulations, the drivers who retired on Saturday were allowed to re-start with time penalty. In the Sunday’s four stages, Juuso Nordgren managed to achieve one fastest time, two second-fastest times and one fourth place. With the penalty, though, it was only enough for 20th position overall.

“For sure it was a learning experience, still we need to finish such rally with some good result. Big learning, big experience”, said Nordgren about the rally.

At the top, the situation was mostly unchanged, with crews of Bruno Magalhães, Norbert Herczig and Hubert Ptaszek keeping the 1-2-3 positions. Local driver Simos Galatariotis fell to 5th position overall but still, the FABIA R5s took 8 of the top 10 positions.