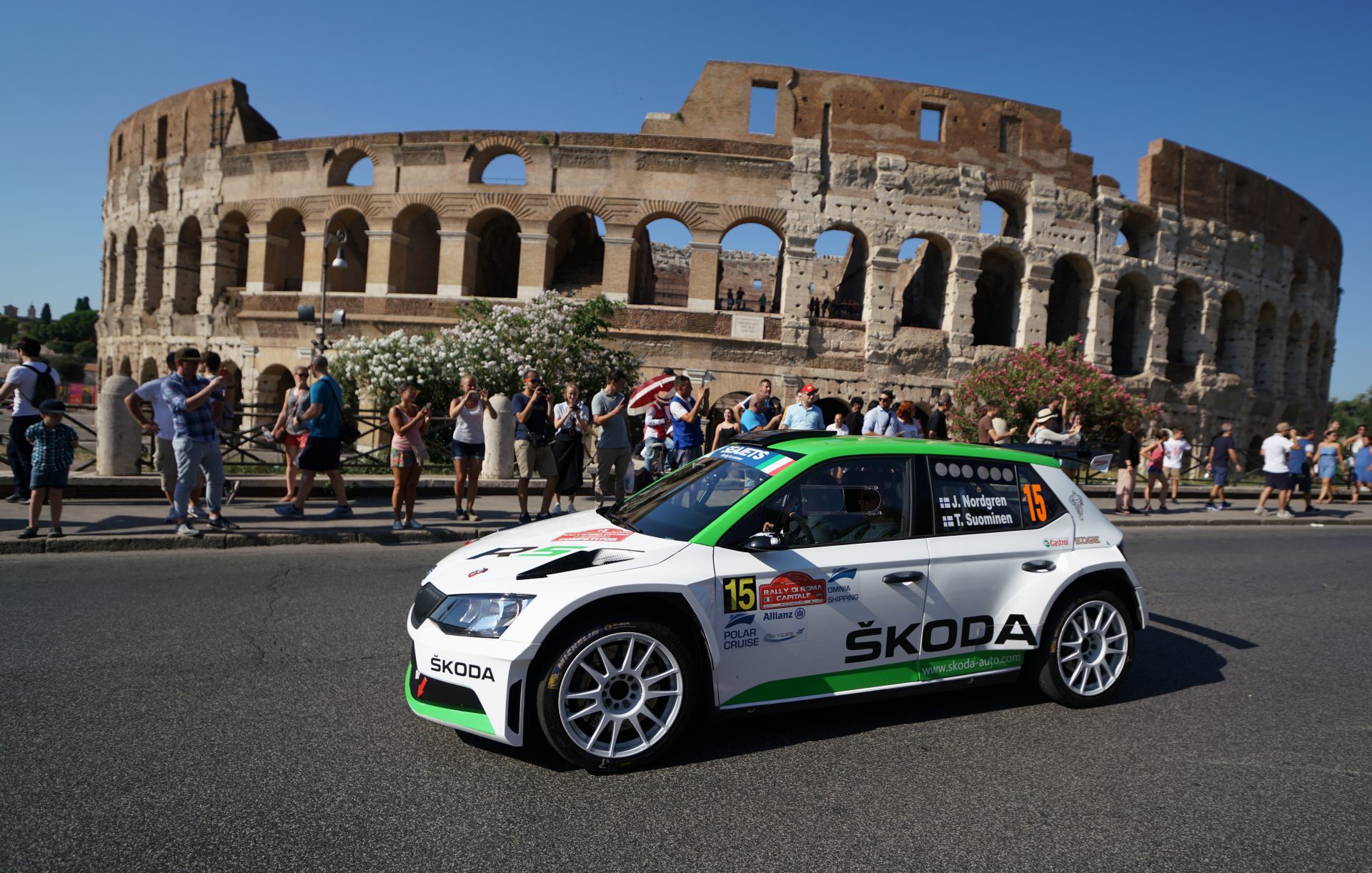 In one of the most challenging tarmac rallies in Europe, ŠKODA FABIA R5s once again dominated the top of the standings, with eight cars in the top ten places.

While the ŠKODA Motorsport team does not compete in European Rally Championship, there was no shortage of FABIA R5s at the ERC’s last round. No less than fifteen of them came to compete on the tarmac roads in and around the Italy’s capital.

The ŠKODA works crew of Juuso Nordgren with co-driver Tapio Suominen was one of them, driving a FABIA R5 entered privately by Wevers Sport. Their main goal was for Juuso to gain more experience on tarmac and maybe also break the streak of bad luck. On last two ERC rallies – both run on gravel – he proved his speed but his result was ruined by punctured on Rally Acropolis and he was stopped by a mishap in Cyprus.

In Italy, the young Finn had a clear task: To Bring the car to the finish and get as much experience on the twisty tarmac roads as possible.

“I think this was the most challenging stage in my career. The roads are quite narrow, you have to trust your pace notes”, was his resume after special stage two which saw him on tenth position in the overall standings.

Nordgren continued his learning and while a lot of competitors suffered punctures in the fifth stage, he made a faultless run and moved up in the leaderboard.

He commented it: “When we saw the others had so much troubles, we decided to keep our pace steady, pushing in these conditions wouldn’t be good.”

In the end, Juuso and Tapio finished in seventh place. Sixth would have been possible, but they lost more than half a minute due to spinning out.

They weren’t the only ones to have a difficult rally, though. Another Scandinavian crew, Fredrik Åhlin (who you may know from our recent video) and Joakim Sjöberg, had their share of troubles as well. In the first stage, a broken driveshaft cost them about ten seconds and in SS5, they suffered a puncture.

“I am not happy with our pace on tarmac and sometimes I have not enough confidence”,confessed the Swedish driver but nevertheless managed to finish the rally on tenth position after some encouraging stage times.

At the Rally di Roma Capitale, eight ŠKODA crews finished within the top ten, with Italian crew of Giandomenico Basso and his co-driver Moira Lucca close behind the winner Alexey Lukyanuk. It’s possible that they would be able to close the gap of 7.5 seconds, but cancellation of the longest stage due to large and uncontrollable crowds of spectators and interruption of another due to accident meant they did not get a chance.

The German pairing Fabian Kreim and Frank Christian, running a ŠKODA FABIA R5 from ŠKODA Auto Deutschland, delivered a stunning performance by finishing fourth behind another ŠKODA crew, Grzegorz Grzyb/Jakub Wróbel from Poland. Kreim also managed to win the ERC Junior U28 category and enlarged his lead in this championship as well.