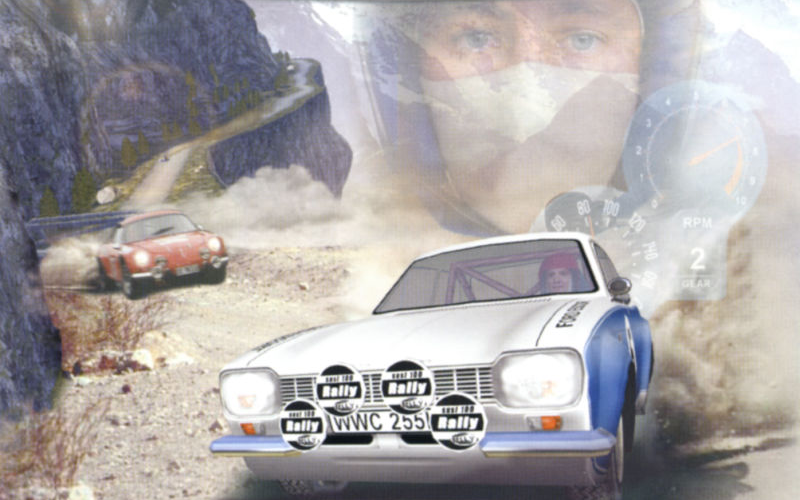 Around the turn of the century, the number of rally simulation games on offer was pretty generous, even abundant. You could play the legendary Rally Championship 2000, Colin McRae Rally 2.0, V-Rally, Pro Rally 2001 and many others, but all of these games had one thing in common. While each of them offered different tracks and various cars, all of them focused on modern rallying. Not one of them covered the sport’s history.

That was a gaping hole just waiting to be filled. And so, somewhere in Finland, a studio called Bugbear Entertainment was founded in the spring of 2000. It only took until the end of 2001 to release its first game and begin a minor revolution. For the first time, there was a rallying game which could be called a true simulation and which you couldn’t master in a few hours of playing. If you had a steering wheel rather than just a keyboard it dramatically improved your driving experience and car control. This certainly wasn’t true for games like Colin McRae Rally 2.0, which was actually easier to control with the keyboard. Maybe being better to play with the driving wheel than the keyboard is one way to define a true rally simulation? If that’s the case, then Rally Trophy was truly revolutionary, and not just when it came to the driving model.

As soon as you start the game, the intro takes you way back into the past, making it clear what you’ll be driving. Developers based the game on real rally cars from the years between 1962 and1976, bringing a breath of fresh air into the world of rallying simulations. Like the legendary F1 simulation Grand Prix Legends, Rally Trophy recalls a time when rallying was more about tactics and driving skills and less about power; a time when Minis could beat Ford Cortinas and Porsche 911s.

Which models can you drive in Rally Trophy? Representing the front wheel drive cars are the Mini Cooper 1275 S, the Saab 96 and the Lancia Fulvia. The latter two are equipped with unusual V4 engines. All three cars share the tendency to understeer which is typical of front wheel drive cars. As understeer is considered to be easier to control and less treacherous than oversteer, you can only drive FWD cars at the beginning of the game.

Soon, though, you acquire more difficult cars and using a steering wheel instead of a keyboard becomes a really good idea. Trying to tame, for example, the brutal Lancia Stratos with only your keyboard arrows is a scary task. Besides the Italian rallying legend, the game offers a wide array of other cars that try their best to make your life hell in the turns: the Ford Escort Mk1, the Fiat 600 Abarth, the Opel Kadett, the Ford Cortina, the Alfa Romeo Giulia GTA, the Volvo Amazon and, last but not the least, the Alpine A110.

The game has few shortcomings, but the tracks are one of them. Together with the difficult controls, they were considered a problem by contemporary reviewers and may well have cost the game the title for the best racing game of the year, which went to a NASCAR simulation instead. The game offers five locations: Russia, Finland, Sweden, Switzerland and Kenya. Although they have varying weather and a large number of tracks (six stages for every rally besides Russia, which has eight), they come are rather monotonous, lacking interesting turns and varied profiles. Only the Switzerland location comes close to really being an exciting rally stage.

Another interesting aspect of the game is your co-driver. Besides reading pacenotes and informing you of dangers like animals crossing the road (which you can’t hit), he’s prone to making witty remarks about your performance. Slow times in special stages, as well as shunts, warrant digs from your co-driver, prompting you to perform better – or stressing you out enough to crash again. All of this makes the game that bit more believable and life-like.

The game is still playable even on modern computers and remains one of the few proper simulations of historic rallying. If you have some spare time in your evenings, it might be worth your while to give Rally Trophy a try.

And if you like classic ŠKODA rally cars, you can even download a mod that adds them into the game, creating a unique opportunity to try out a rear-engined cars like 1000 MB, 120 S or 130 RS in the virtual world!