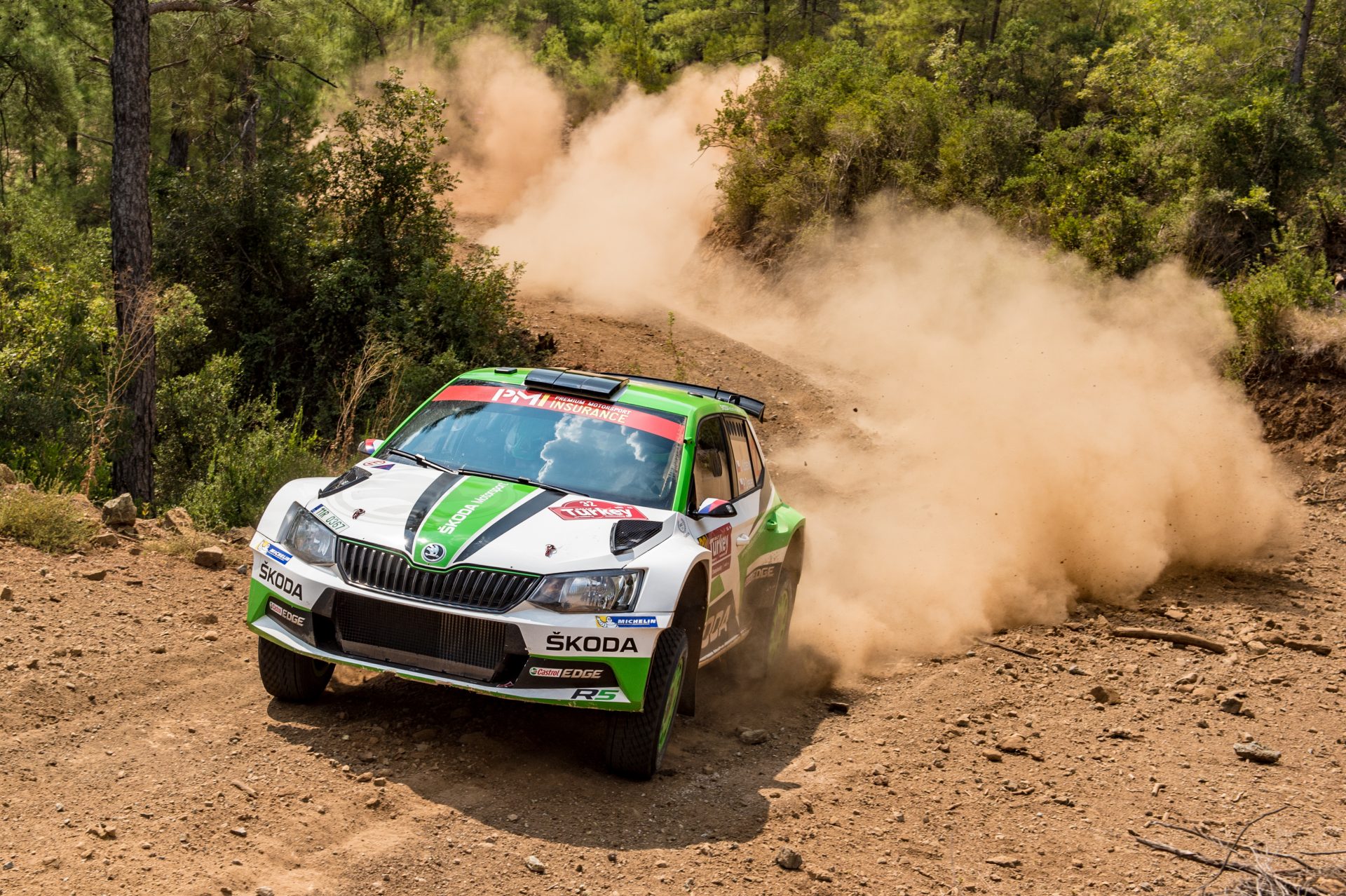 This year’s Rally Turkey is on! The crews will face fast and smooth roads around the coastal resort of Marmaris on the Turkish Riviera, as well as rough and rocky roads in the mountains around Mugla. What to expect? We don’t know, as this is the first year of Rally Turkey’s return to the WRC 2 calendar. What we know is that the battle between Jan Kopecký and Pontus Tidemand will be fascinating to watch! Keep watching us so you don’t miss anything important!

On Thursday morning, the action started with the shakedown in the hills around Değirmenyanı, in about a third of way from Marmaris to Datça. Right from the start, the FABIA R5s proved their speed with the 1-2-3 result. Jan Kopecký took one of the works cars to the lead with the time of 3:43.3, followed by Pontus Tidemand at 3:47.0 and Norwegian privateer Henning Solberg from Norway with 3:47.1 in the third place.

The evening of the first day belonged to the spectacular super special stage in the streets of Marmaris which set off the rally. A two-kilometre loop which formed a three-pointed star in the city centre, connected by the large roundabout in the middle, was lined with huge, cheering crowds.

Both ŠKODA Motorsport works crews decided to take it easy and preserve their cars (and especially tyres) for the next days. The morning’s shakedown proved that the rally will be extremely hard on the cars, especially on tyres and suspension, and it is wise to play it safe.

Once again, Jan Kopecký was the faster of the works drivers, taking overall second place with the time of 2:07.3. Pontus Tidemand, though, was right behind him at 2:08.7 and we can be sure that he will not give anything easily to his teammate. Other two FABIA R5s in the top ten were Chris Ingram in the 6th and Burak Çukurova in the 8th position.

On Friday morning, the rally started for real and right away, it took crews to the its longest stage, the daunting, 38.10 kilometres long Cetibeli. With all kinds of gravel surfaces, fast passages and narrow winding roads, it definitely wasn’t a walk in the park.

“It was quite tricky, especially because there was no wind at all. In some places, I was completely lost in the dust. No big push as this rally is really long”, commented Jan Kopecký, who finished the stage in the first place, 0.7 seconds in front of Pontus Tidemand.

“I was very careful in the beginning, the next stage should be cleaner so I will push on that one”, said the Swedish driver about his run.

After two stages, the gap between the WRC 2 leader Kopecký and second placed Tidemand was just 2.1 seconds. The reigning Czech Rally Champion then set another fastest time and widened the gap to nine seconds. On the final stage, Pontus Tidemand fought back, posted the fastest time and reduced the gap to five seconds before the midday service in Marmaris.

Also in the top five is Chris Ingram with his co-driver Ross Whittock, driving a FABIA R5 fielded by Toksport WRT. In fourth place, he is a little over two minutes behind leading Kopecký and almost a minute in front of the local hero Yagiz Avci on Ford Fiesta.

The afternoon started out rough for both ŠKODA Motorsport crews. In the second run of the 38.10 kilometre Cetibeli stage, Pontus Tidemand had to change a tyre due to a puncture, while his teammate Jan Kopecký suffered two flat tyres on his front axle, which he had to change as well. To make things worse for Pontus, he discovered another slow puncture at the end of the stage. This meant that both ŠKODA works crews had to complete the remaining two stages of the day with no spared – any puncture would force them to retire.

“Anything can happen at any moment to anyone”, commented Jan Kopecký after the massive mishap. Although both drivers lost a lot of time, Tidemand kept his second place in the WRC 2 category standings, followed by Kopecký just 17.3 seconds behind him. They also weren’t alone with their troubles, as rough terrain caused punctures to other crews as well.

In the last stage of the day, the reigning WRC 2 champion Tidemand collected another slow puncture and, to make his troubles even worse, his suspension broke. This combination of mishaps meant that he had to retire from the third place. Jan Kopecký, knowing that another puncture would mean an end of his run as well, drove the remaining kilometres carefully and finished the tough Friday leg as the leading driver of WRC 2 category.

ŠKODA Motorsport boss Michal Hrabánek commented: “What a tough day! Jan kept the category lead despite suffering punctures. I feel sorry for Pontus, who had to retire.”

While both works crews had a streak of a bad luck, Chris Ingram and Ross Whittock on ŠKODA FABIA R5 entered by Toksport WRT private team enjoyed a great success. After both factory cars experienced troubles in SS5, they moved up to the overall lead of WRC 2 category, where they stayed until Jan Kopecký moved them down to second position in SS7. This means that ŠKODA FABIA R5 still holds a double lead, while Turkish rally champion Burak Çukurova moved up to the 6thplace in the WRC 2 overall standings.

Number of the day: 4

After Pontus broke his suspension in SS7, everyone was anxious to know if he will be able to re-start on Saturday morning. Unfortunately, the team discovered additional structural damage when the car was inspected during the evening service. After consultation with FIA technical stewards, it was obvious that a sustainable and safe repair was impossible to carry out. This meant that Pontus Tidemand and Jonas Andersson had to retire from Rally Turkey for good.

It was sad news for rally fans everywhere, as the tense and exciting battle for victory in Turkey and for the lead in the WRC 2 category ended. From now on, everything was in the hands of the reigning Czech Rally Champion Jan Kopecký. His victory in Turkey would secure the WRC 2 championship victory for ŠKODA, but there was still ten tough gravel stages waiting for him. On Saturday alone, six stages of over 134.20 kilometres had to be driven.

Kopecký started out great on Saturday morning, setting the second quickest time and increasing his lead. On SS3, though, a broken driveshaft turned his ŠKODA FABIA R5 into a rear-wheel-drive-only car. Kopecký lost several minutes and dropped to second position behind ŠKODA privateer Chris Ingram. During the midday service, his car was repaired and he went into the afternoon stages fully prepared to post another set of great times.

With his car back in order and powering all four wheels, Jan Kopecký started to close the gap on leading Chris Ingram. Just on the longest stage of the day, the 34.24 kilometres long SS11 Yesibelde 2, he gained 41 seconds and got withing half a minute to Ingram, with two more stages left to go.

Next stage, 10.70 km long Datca 2, saw him gain another 11.3 seconds and close the gap to less than 20 seconds. Continuing his clean run, free of any mistakes, he managed to finally overtake Ingram in the last stage of the day, 20.37 km long Icmeler 2, which he finished 44.5 seconds ahead of Simone Tempestini in the second place, while Ingram fell to the third, 1 minute, 32.3 seconds behind Kopecký.

If Kopecký keeps up his pace and wins Rally Turkey, it is mathematically certain that either him or Pontus Tidemand will become the next WRC 2 Champion.

ŠKODA Motorsport boss Michal Hrabánek said following about the busy day in Turkey: “Today, Jan and Pavel impressed me with faultless and fast drive on tough gravel stages in Turkey.”

After 17 tests in total, the winner will reach the podium in Marmaris on Sunday (16 September) at around 13h00.

Number of the day: 44.5
Despite two punctures on Friday and transmission issues on Saturday, ŠKODA factory driver Jan Kopecký holds the lead in the WRC 2 category by 44.5 seconds.

Starting the day with the 44.5 second lead to Simone Tempestini on Citroën C3 R5, Jan Kopecký focused on playing it safe and preserving both the car and his lead in the rally. He started the day with 4thplace finish in the Marmaris 1 stage and proceeded to place second, behind Kajetan Kajetanowicz on Ford Fiesta R5, but in front of Tempestini in all three remaining stages.

The result was not only enough to maintain his lead, but even to increase it to 1 minute and 11.9 seconds after the end of final Power Stage Marmaris 2. With overall time of 4:17:49.7, he won the Rally Turkey, his fifth victory of the five WRC 2 rallies he attended this year.

For the team, this means more than one result to celebrate. As Jan scored 125 points in this season so far, with Pontus Tidemand right behind him at 93 points, it is now mathematical certainty that one of them will, at the end of the year, become the WRC 2 champion. ŠKODA Motorsport also secured its fourth victory in FIA WRC 2 Championship for Teams for the fourth time in a row (subject to official publication of results by the FIA).

“This fantastic result is a well deserved reward for the whole team. Congratulations to Jan and Pavel. After some setbacks, they proved their great morale and delivered a faultless performance”, said happy ŠKODA Motorsport boss Michal Hrabánek after the rally.

And Jan Kopecký was happy as well: “Many thanks to the team for giving me the great ŠKODA FABIA R5 which withstood these tough gravel roads. Now Pavel and I are very close to crown our careers with the drivers’ title in the WRC 2 category.

ŠKODA factory crew Jan Kopecký/Pavel Dresler won each of the eleven rallies they were competing in 2018, including five events in the WRC 2 category of the FIA World Rally Championship and six rounds of the Czech Rally Championship.