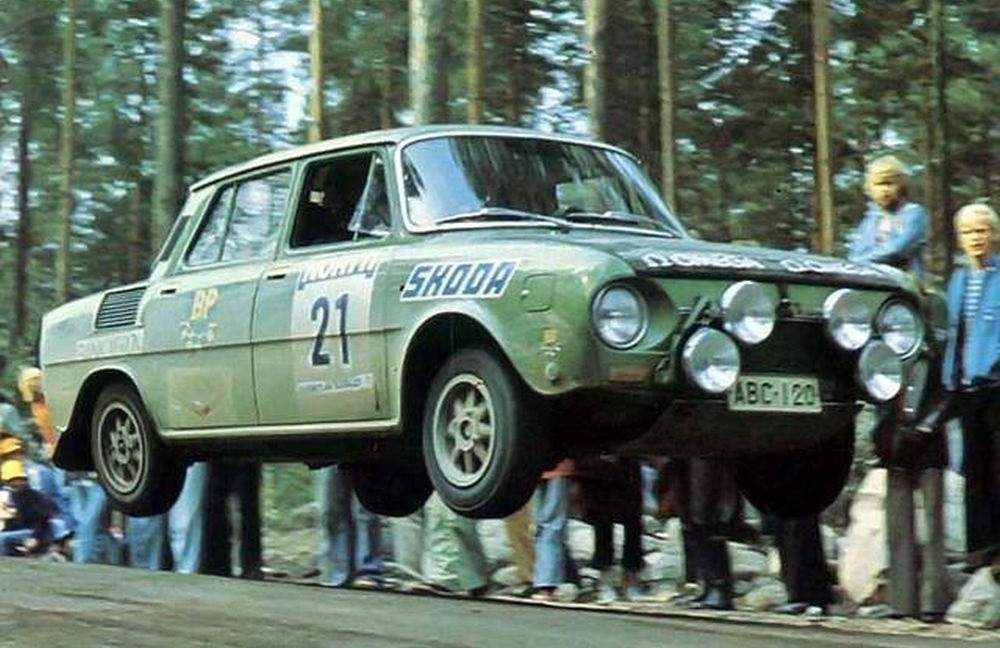 At first glance, it may have looked like the standard ŠKODA 100/110, but in reality, the 120 S RALLYE, with its reworked cooling and powertrain, was much closer to the legendary ŠKODA 130 RS.

In the early 1970s, the International Automobile Federation (FIA) significantly altered the development of sports cars when it closed the 1,150 cc class, replacing it with a new, 1,300 cc one. If ŠKODA stayed with smaller engines, they would have a significant disadvantage when compared to their competition. Luckily, ŠKODA’s development team was already working on a new, longer-stroke engine.

This modification was planned for future mass production, specifically for the planned ŠKODA 742 line. The 1,173 cc in-line four-cylinder engine allowed for increasing the bore as well, moving the displacement up to the new limit of 1.3 litres allowed by FIA. The right solution was found and a relatively unknown – yet very important in terms of future development – rally car was born. It was called the ŠKODA 120 S, or the 120 S RALLYE in its competition form.

Similar only at first glance

Superficially, the car may have looked almost identical to the ŠKODA 100/110 of the same era, but technically, it was so different that it received a new type code – Š 728. One of the most important changes was moving the radiator from the engine bay to behind the redesigned front fascia. The hot air was released through a channel leading into a newly created grill in the front bonnet. Using a so-called “chimney effect”, this solution was so efficient that the modified cooling system didn’t need any fan to help it.

As the first “one-twenty” didn’t have any bumpers, its designers moved the turn signals into the new cutouts under the headlights. The cars from the homologation series, however, which were supplied to the Czechoslovak Ministry of the Interior, were fitted with standard bumpers from the production ŠKODA 100/110, the grill in the front fascia and the vent in the bonnet being the only signs of their unusual engineering.

The tests of the first prototype showed that moving the radiator brought not only improved cooling efficiency, but also better handling. Still, the most important upgrade was the engine, of which several versions were developed.

From the civilian version to the rally special

The standard four-cylinder engine of the civilian version of ŠKODA 120 S had a displacement of 1,173 cc and a compression ratio of 9.4:1. Fitted with a Jikov 32 DDSR carburettor, its maximum output was 64 PS at 5,250 rpm and it had a maximum torque of 89 Nm at 4,000 rpm. Among other modifications, the power plant had cast-iron crankshaft bearing caps, an eight-channel cylinder head and a precisely balanced crankshaft with connecting rods.

Weighing just 795 kg, the 120 S was able to accelerate from zero to 100 km/h in 16.4 seconds and it was able to achieve a maximum speed of 150 km/h, given a long-enough straight. While those numbers may not seem very impressive today, it was the year 1972 and it was the least-powerful version of 120 S.

The ŠKODA 120 S RALLYE offered a somewhat more interesting performance and dynamics. The hotter version was built with two Weber 40 DCOE 2 twin carburettors. Together with the compression ratio increased to 10.8:1, it provided the car with 84 PS at 6,500 rpm, enough to shorten the acceleration to a 100 km/h to 14.2 seconds. Much better, but still not the best.

For its rally drivers, ŠKODA prepared a works version with the engine bored out from 72 to 75.8 mm, increasing the displacement to 1,299 cc. This wasn’t the end of their modifications, though. The engineers introduced a dry-sump lubrication system, an enhanced Lucas ignition and a re-ground camshaft to change the valvetrain timing. They also changed the cylinder valve channels and the exhaust system.

The production of the ŠKODA 120 S started in the autumn of 1971 and finished in February 1972, when ŠKODA entered the homologation request. The manufacture itself was done by the Special Modifications Department. The model was very important for several reasons, probably the most important of which was that the 120 S became the predecessor of the legendary ŠKODA 130 RS when it came to the design of the engine, gearbox and cooling system.