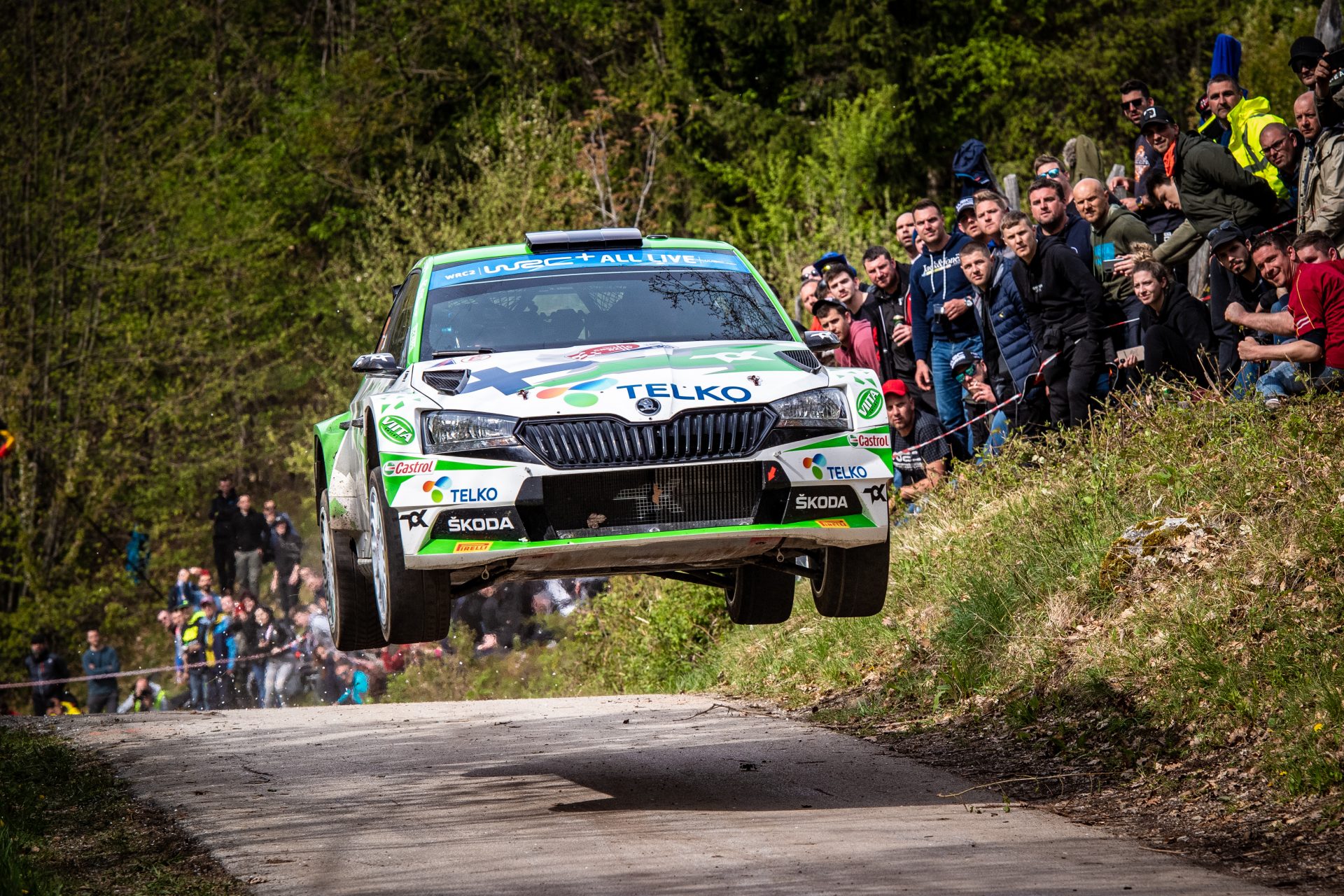 Treacherous asphalt with a taste of rain | Croatia Rally

After a long break, all fans were treated to this year's third round of the World Rally Championship (WRC), the Croatia Rally. Challenging rain-soaked stages with frequently changing asphalt quality mixed up the overall standings. The ŠKODA FABIA Rally2 evo took second to fifth places in the WRC2 category, once again confirming their dominant position.

The asphalt stages around the capital city of Zagreb are characterised by the often alternating quality of the asphalt and its grip. In places, the brand new smooth surface transitions itself without warning into old worn-out asphalt, which has been mercilessly affected by the ravages of time and weather.

Finding the right asphalt set-up for such a varied surface is a challenge even for experienced teams. Unlike last season, when the entire Croatia Rally took place in the dry, this year's rally was rainy. As a result, the crews set off mainly on wet tyres. However, for the teams and crews, the key to the rainy weather was the information about the current conditions of the surface of the stages during the rally. This is because the rally cars, when "cutting" the corners, gradually pull sand and mud from the ditches onto the road, which dramatically reduces the grip of the asphalt tyres. Therefore, it is extremely important to know in advance in which passages you need to slow down. Cutting also significantly increases the risk of puncture.

In these treacherous conditions, 19 crews set off in the ŠKODA FABIA Rally2 and Rally2 evo to fight for the best possible position. The popularity of this car was evident at first glance as almost 30% of all the cars in all the groups were the ŠKODA FABIA.

The fastest ŠKODA crew in Friday's first stages was the Chris Ingram/Craig Drew pairing in the ŠKODA FABIA Rally2 evo, but they were held back by a puncture. Nikolay Gryazin/Constantin Aleksandrov took the lead and brought their ŠKODA FABIA Rally2 evo to the finish line on Friday evening in second place in the WRC2 category. Kajetan Kajetanowicz/Maciej Szczepaniak then finished fourth ahead of Emil Lindholm/Reeta Hämäläinen, also driving a ŠKODA car. The crew of Chris Ingram/Craig Drew took sixth place after an unfortunate delay.

Saturday started with the Kostanjevac - Petrus Vrh stage, which continued along the road to the Adriatic Sea, one of the other new features for this year. However, even Saturday's 117km stages did not bring a change in the WRC2 category lead and Yohan Rossel retained first place ahead of Nikolay Gryazin, Kajetan Kajetanowitz, Emil Lindholm and Chris Igram in the ŠKODA FABIA Rally2 evo.

On Sunday, the rally continued north of Zagreb on the widest sinuosity of the entire event. It was here where the Kajetan Kajetanowicz/Maciej Szczepaniak crew took second place in the WRC2 category, a position they held onto to the finish. However, the fastest WRC2 driver on Sunday was Emil Lindholm. The reigning Finnish champion at the wheel of the ŠKODA FABIA Rally2 evo won three of the four stages of the day, including the Power Stage, which earned him three extra points. He reduced his lead over Kajetanowicz to less than ten seconds, but had to settle for third place in the WRC2 category at the end. His reward, however, was his victory in the WRC2 Junior category.

A total of 18 FABIA Rally2 and Rally2 evo specials reached the finish. Although the current WRC2 category leader Andreas Mikkelsen did not take part in the Croatia Rally, he still remains in the first place in the WRC2 driver standings and the ŠKODA Motorsport-supported Toksport WRT team continues to hold the top spot in the team standings.

Croatia rally
Although this only has been the second time in its history that Croatia has appeared in the World Rally Championship, it is certainly no newcomer to rally events. Back in 1974, the former Yugoslavia's national championship was held for the first time and in 1986 Croatian stages were included in the European Rally Championship (ERC).