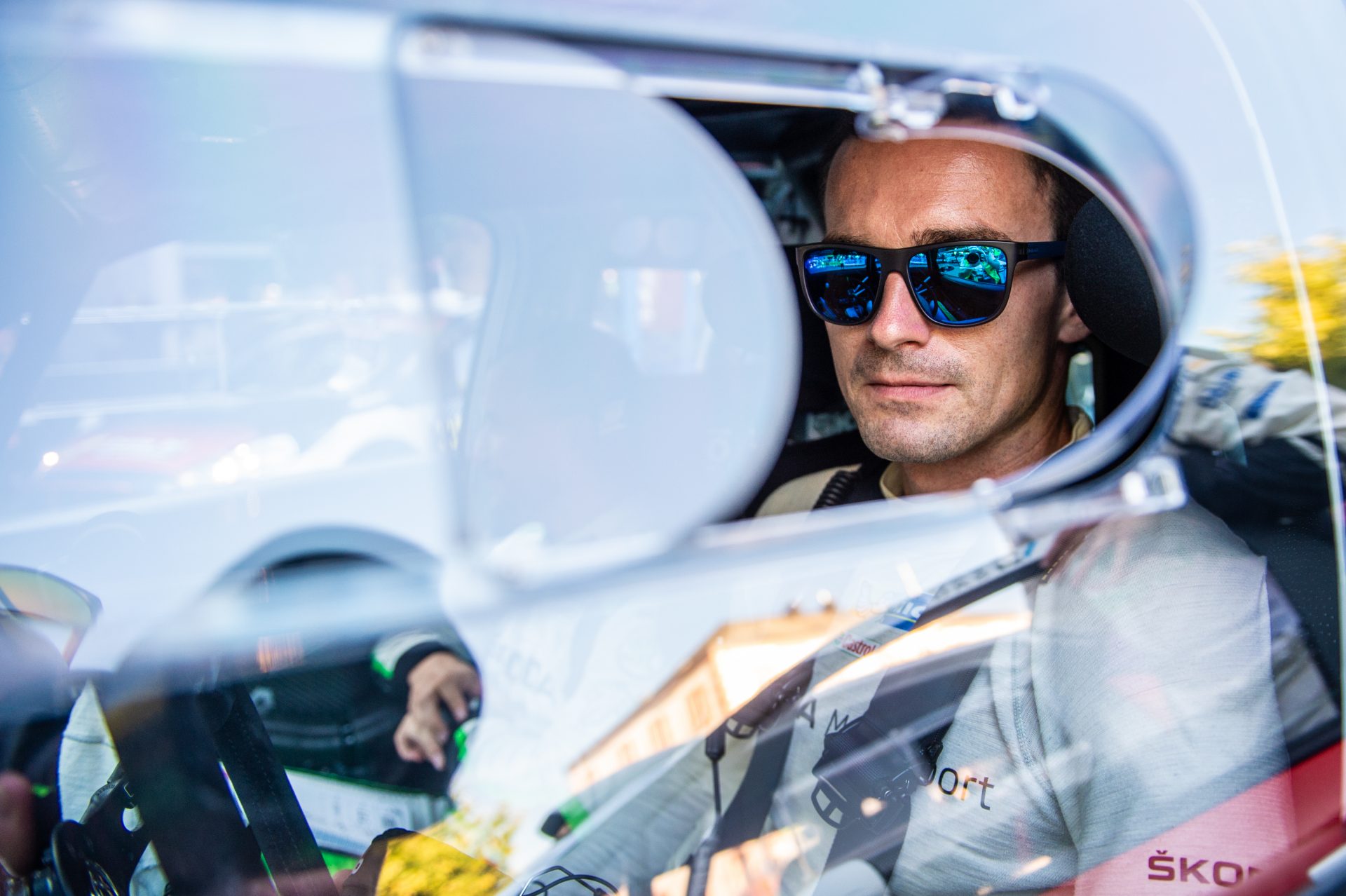 What Does Jan Kopecký Think about The Recent Rallye Deutschland 2018?

This year’s German rally was one of the most thrilling of the whole season. After a smooth start and impressive results from both ŠKODA Motorsport crews in the first super special stage, where they managed to beat most of the WRC class cars, Saturday brought troubles for Jan Kopecký and Pavel Dresler. The race seemed to be lost on Saturday afternoon, but they managed to turn it around. In the end, the works crews finished in the first two positions of the WRC 2 class.

You might already have read the detailed story of this year’s Rallye Deutschland in our regular reports, and seen the wrap-up video. Now, we bring you an interview with the hero of the past weekend, and leading driver of the WRC 2 season, Jan Kopecký. How did he manage to overcome his bad luck and what does he think about his teammate Kalle Rovanperä? Read on!

Jan, your drive in Germany was a thrilling experience for every rally fan. How was your path to the victory?

We were already fast in the shakedown and the evening super special stage only cemented our lead. Unfortunately, we started among the first cars and there wasn’t enough rubber on the track. The surface was a bit like a kart track and the grip got stronger with each car. That was good for Kalle, who started among the last WRC 2 cars and scored a fantastic second place overall. We finished fifth, but we were satisfied. It was great seeing three FABIA R5s among the top five cars.

What were your goals going into the Friday leg of the rally?

On Friday, we didn’t really need to win every stage, but we wanted to be fast. Then a heavy rain started to fall in the last 12 kilometres of SS2, leaving us with barely any visibility. There was standing water everywhere and it was really hard not to end up in the wine grapes with the heavy car. In the end, we survived and ended the day with a great time, over 20 seconds ahead of second place. In the afternoon, Nil Solans was pushing us, but a 40 second penalty moved him way back.

The Friday went well, but the same can’t be said about Saturday, can it?

Not at all. The puncture at Panzerplatte brought us to our knees.

How did it happen?

We don’t really know ourselves. We had a puncture there last year as well. The Panzerplatte is so rough that you never know what edge, rut or transition from tarmac to concrete you will hit, or what will slice your tyre open. This time, it was a quick puncture in the fourth- or fifth-gear sequence and we didn’t even know about it at first. We went through a fast turn and as soon as I braked again, it was obvious that we’d got a flat tyre. A strange situation, as we didn’t go off the track, there was no cut, nor did we notice any bump. In just 100 metres, we’d stopped and changed the tyre. I think we managed to do it pretty quickly, but it still meant a loss of a minute and a half, which is a lot. We fell from the euphoria of running a great race down to ninth position. We had no other choice but to lock ourselves in the car and try to do something about it.

What was your first reaction to the puncture? Did it take away the will to continue?

You can’t think like that, because once you give up in your head, you lose your speed. It’s no use continuing the race then. You might as well go back to service and park the car then and there. You just can’t give up, that’s what I know from experience.

How did the rest of Saturday go?

In the morning run, we had two stages left. They weren’t long enough for any real catching up, so it was obvious we would have to attack in the second run of the Panzerplatte. We changed the strategy with that in mind, and we drove the rest of the morning on the used soft tyres from the Friday’s super special stage. This way, we saved the new tyres for the afternoon and for the Sunday run. With the temperatures rising, the use of soft compound was a bit of a risk, but thankfully the set survived and we managed to win the remaining morning stages on it.

The breakthrough came with the second run of the Panzerplatte, where we managed to get within 20 seconds of second place. Eric Camilli was another half a minute further ahead. Given his driving abilities, it looked as if it would be impossible to catch up on him, but then he had some technical difficulties and suddenly first place was in our sights again.

Let’s go back to the second run of the Panzerplatte. Did you go flat out?

It’s impossible to describe it that way. If we had gone really flat out, we would have destroyed the tyres after 15 kilometres. You have to find the right balance between speed, aggression and a clean line. It’s about finding the fine line that lets the tyres survive until the finish. After 15 kilometres, our tyres started to overheat, so I changed my driving style a bit and went easier on them so I wouldn’t reach the finish on bald tyres. I put my foot to the floor once again just 7 kilometres from the finish, when it was obvious that the tyres would hold up. In the end, we caught up around 20 seconds, which was decisive for our eventual victory.

How was your relationship with Kalle during the rally?

Kalle is a typical silent Finn. He’s got his own ways, but he’s unbelievably mature for his age, both mentally and as a driver. It’s obvious that he’s got a lot of kilometres racing cars under his belt. He can feel the car and he drives in a really clever way. That boy will be a world champion one day, that’s for sure.

Did you act as his tarmac mentor in Germany?

I don’t think so. He asked about a few things from time to time, but he didn’t really need much advice. He really impressed me.

On Sunday, the rally returned to the vineyards. Did you deliberately build your speed gradually?

Yes, the Grafschaft was a new stage and the car was heavier, as we were carrying two spares to be on the safe side. On the first run, I may have gotten a bit complacent and I didn’t drive as aggressively as on the Saturday afternoon. We reduced the gap by just 3 seconds and we were still only in third place. That wasn’t enough, so we had to push on in the second run. The last stage was too short for any real catching up, so we had to be fast in the second run of the Grafshaft. There, we went flat out and were 13 seconds faster compared to the first run. That got us back in the lead. After the puncture, we won every stage. I think that the second runs of Panzerplatte and Grafschaft were the key moments for our victory.