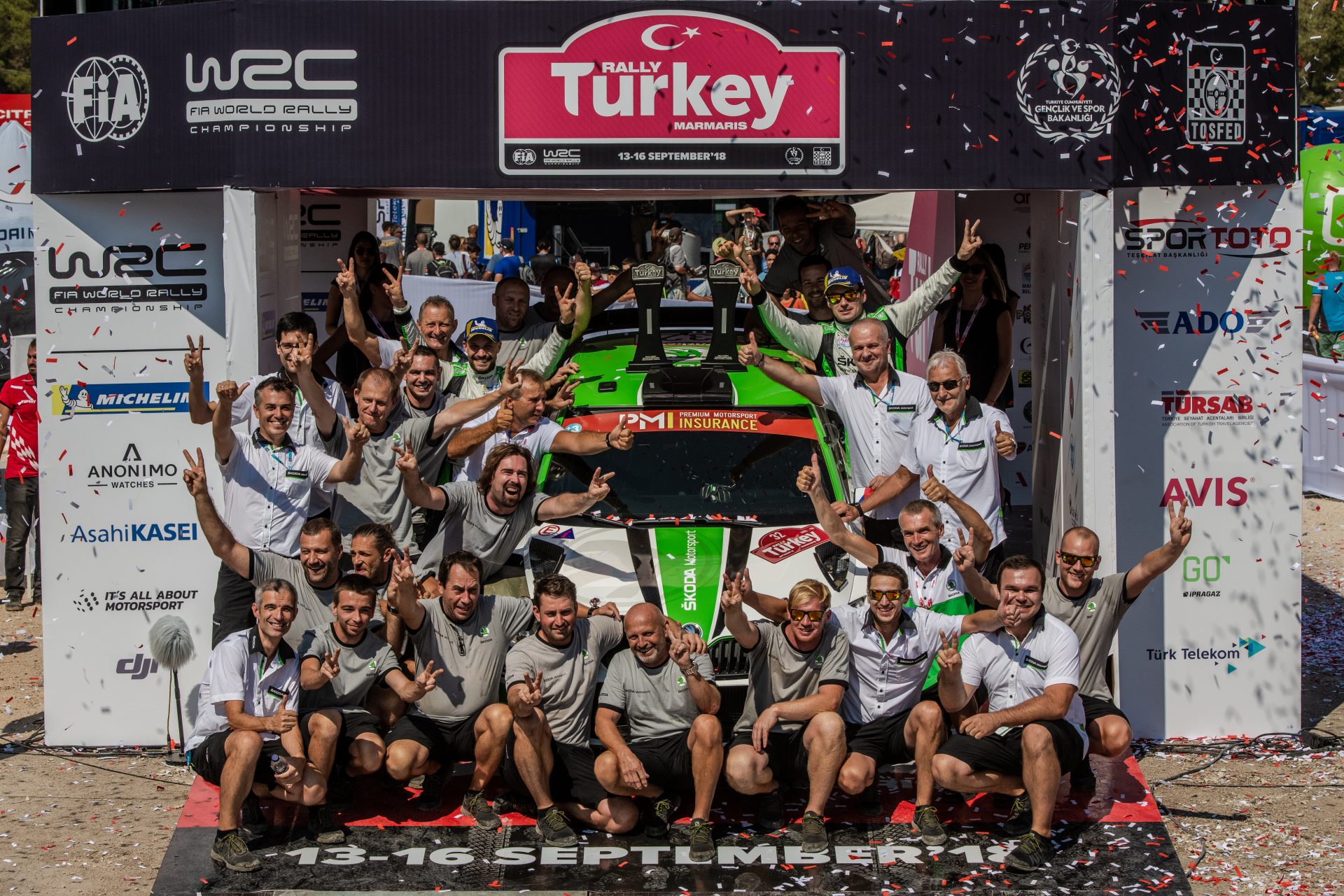 Four Seasons of Champions: How FABIA R5 Came to Dominate the WRC 2

In the four years since it was introduced, the ŠKODA FABIA R5 has made its name as the most successful car in WRC 2 as well as in several other championships that use R5 specification cars. For the ŠKODA Motorsport works team, this meant four consecutive victories in the FIA WRC 2 Championship for Teams*. Here’s the story of this remarkable winning streak.

It took until the fifth rally of 2015 for the FABIA R5 to be ready to race in WRC 2. When the car finally debuted at Rally de Portugal, its performance left no one in doubt that the ŠKODA meant business in its category. Right away, Esapekka Lappi and Pontus Tidemand took 2nd and 3rd place, respectively.

Since that moment, the factory team have managed to score at least one podium finish in every rally they entered. In Poland and Finland, Lappi and Tidemand scored double victories, while Kopecký won in Germany. In the final rally of the year, the RallyRACC Catalunya, the FABIA R5 managed to score its first 1-2-3, when the 2015 WRC 2 Champion Nasser Al-Attiyah, who switched to a FABIA R5 at the end of the season, placed 3rd behind Pontus Tidemand and Jan Kopecký.

The stage was set for bigger things to come, and for ŠKODA’s dominance to last until today. Even though no FABIA R5 driver placed in the top three, it was obvious that it was just a matter of time.

The factory team made a slow start to the 2016 season. With works cars absent at Monte Carlo, Armin Kremer from BRR Baumschlager Rallye & Racing Team was the one to represent the brand, taking 2nd place on the podium. In Sweden, factory drivers Tidemand and Lappi took 2nd and 3rd place, while at Rally Guanajuato Mexico, it was up to Teemu Suninen from TGS Worldwide to score for the factory colours.

Next came victory for Nicolás Fuchs in Argentina, followed by a double from Tidemand and Fuchs in Portugal, another double from Teemu Suninen (this time in a car from Team Oreca) and Jan Kopecký in Sardinia, and another victory for Suninen in Poland. There, Esapekka Lappi from ŠKODA Motorsport took his first podium, a 3rd place. Most people had no idea what was about to happen next.

Lappi won in Finland, ahead of Suninen. In Germany, he again stood on the top of the podium, side-by-side with Jan Kopecký in 2nd and Armin Kremer in 3rd place. This time, Ghislain de Mevius completed the 1-2-3-4 finish for the FABIA R5. Kopecký went alone to the Tour de Corse, taking 2nd place, then went for the victory in Catalunya, with Pontus Tidemand close behind him. In Wales, Esapekka Lappi won again, ahead of Pontus Tidemand and Teemu Suninen, and in Australia, he scored his fourth victory (out of four consecutive starts!) of the season, this time ahead of Nicolás Fuchs.

ŠKODA Motorsport Team, Kennards Hire Rally Australia 2016Overall, it was four doubles and two 1-2-3 victories for the FABIA R5. While Esapekka Lappi became the 2016 WRC 2 Champion, ahead of Teemu Suninen in second place, the team scored once more in the FIA WRC 2 Championship for Teams.

2017: Dominance from the start

The 2017 season began early for ŠKODA Motorsport, who were celebrating 40 years since the famous class victory at Rallye Monte Carlo. Jan Kopecký took the FABIA R5 (which had been given a commemorative paint scheme) to 2nd place, while Andreas Mikkelsen emerged victorious.

From then on, it was Pontus Tidemand’s turn to shine. He won his home rally in Sweden, with OC Veiby behind him in 3rd place, and also Rally Guanajuato Mexico, where Benito Guerra Jr. finished 3rd. At the Tour de Corse, it was Andreas Mikkelsen’s turn to claim the victory, but Pontus returned for another win in Argentina, this time leading the 1-2-3 finish with Juan Carlos Alonso and Benito Guerra again.

He repeated his victory in Portugal, while Rally Italia Sardegna ended with a double for Jan Kopecký and OC Veiby. In Poland, OC Veiby scored his first victory, while Pontus Tidemand, for the first time in the season, didn’t win – he finished second. In Germany,  Pontus Tidemand achieved his worst result of the year, a 3rd place. Catalunya was another runner-up finish for Kopecký and a 3rd place for Guerra, while Tidemand scored one more win in Wales.

When the season was done, Pontus Tidemand’s 140 points was more than enough to earn him the title – Eric Camilli, in second place, was almost 50 points behind (on 91 points). Jan Kopecký narrowly missed the podium with 76 points, only 6 points behind Teemu Suninen.

This year’s season was the best ever for ŠKODA Motorsport – and unlike previous years, there was more than one contender for the title from within the team. From the very beginning, Pontus Tidemand and Jan Kopecký took turns scoring big time. Kopecký won at Monte Carlo; Tidemand placed second in Sweden and won Mexico. Jan won the Tour de Corse, while Pontus scored in Argentina and Portugal – only for Jan to get even with another win in Sardinia. While Finland was the only rally of the season without a podium position for ŠKODA Motorsport, the team scored wins in the next four rallies in a row – two for Jan Kopecký and two for the recently turned 18 Kalle Rovanperä. As the team isn’t going to Australia, the current overall score of 399 points is the final outcome of the season.

Read more about our best season so far in our recent article!