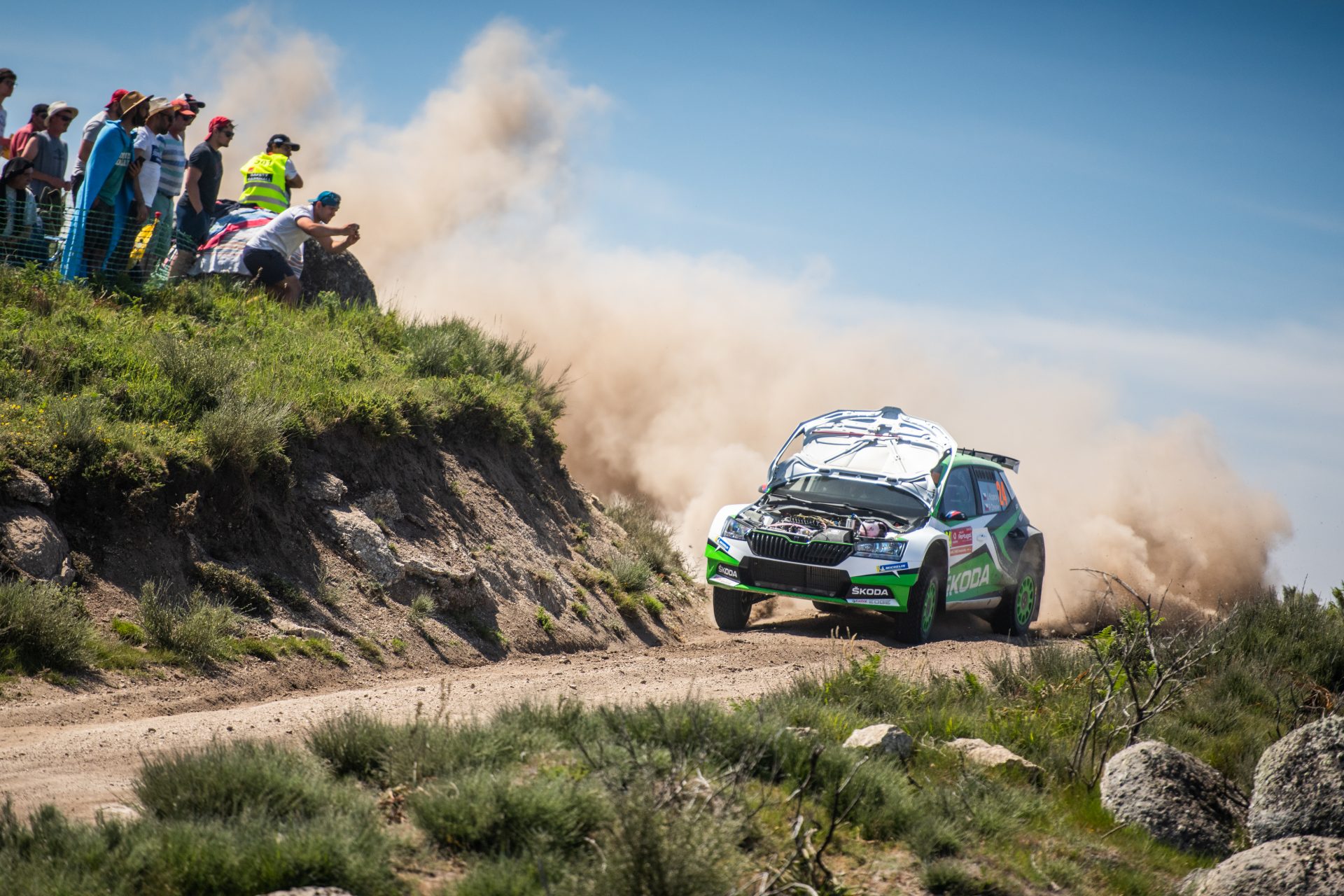 The revamped ŠKODA FABIA R5 evo is making its debut in World Rally Championship. ŠKODA Motorsport fields two cars on Rally de Portugal. One is driven by last year’s WRC 2 Champion Jan Kopecký and his co-driver Pavel Dresler, behind the wheel of the other modernized FABIA R5 is Kalle Rovanperä, with co-driver Jonne Halttunen by his side. For the Finnish duo, this is the first ever start in Portugal, while the Czech crew last attended this rally in 2016.

Here, you can watch the latest news and results. We will be continually updating this article until Sunday. Find more about the background of Rally de Portugal and everything that awaits the teams in coming days in our overview.

In the Thursday’s shakedown, the updated ŠKODA FABIA R5 could show its potential for the first time. It raised a lot of interest not just among the fans, but also other drivers. Even Thierry Neuville came to ask Kalle Rovanperä about his impressions.

Both drivers of ŠKODA Motorsport started their “warm-up runs” carefully, but in the second runs, they confidently moved into the lead of the RC2 class, posting identical time of 3:11.3. Then, Kalle took the lead with the time of 3:10.1 in the third run, while Jan was satisfied with just two runs.

Right in the first stages of the day, Kalle Rovanperä proved that gravel is his forte. Even though it was his first time at Rally de Portugal, he managed to win all three morning’s stages – Lousa, Góis and Arganil – with huge lead. After first runs, he was in front of the WRC 2 overall standings as well as the RC2 class, 20.2 seconds ahead of the field. This is also a clear proof of capability of the revamped ŠKODA FABIA R5 evo.

A tense battle was fought for the places behind Rovanperä – another five drivers in the class finished the first three stages within 10 seconds. After slower start, Jan Kopecký took third place in WRC 2 Pro, but he’s still 7.7 seconds behind the runner-up Mads Ostberg.

The second runs of Friday’s stages really mixed up things – at least for some time. Kalle suffered a puncture, losing 40 seconds to the lead, in the fourth stage. The loss could’ve been even worse, but even so, he fell back to the sixth place in his class. Ostberg, though, had even worse luck. Due to problems with his car, he came late to the start and was struck with a four-minute penalty.

The biggest winners of the afternoon loop were Ole Christian Veiby and Jan Kopecký. With consistent time, the Czech driver moved up to the second place in the class, just four seconds behind Veiby. Rovanperä was doing an excellent job as well, winning SS6 with lead of more than seven seconds and got back into the game quickly. „I had a puncture out of nowhere. The stages are much more rough than I expected so you can’t drive flat out all the time. We’re trying to close our gap to Kopecký, but we don’t have any spares left so we need to be careful“, said Kalle.

Before the evening super special stage, Jan Kopecký and Pavel Dresler were the first in WRC 2 Pro. Kalle Rovanperä and Jonne Halttunen, though, are close behind them with just 5.4 second gap in the second place. The day ended with super special stage, which offered a thrilling atmosphere, but the times were changing only by tenths of seconds.

In Saturday’s leg, ŠKODA Motorsport continued exactly like it started the day before. Kalle Rovanperä won all three stages of the morning run – Vieira do Minho, Cabecairas de Basto and Amarante. This returned him to the lead in both the RC2 and WRC 2 Pro and he finished the first part of the day with comfortable lead of 37.2 seconds on his teammate Jan Kopecký.

The Czech driver made the most of his purposeful style and consistently good times, while his biggest rival, Ole Christian Veiby, was forced to retire after his Volkswagen caught fire. After the first three stages of Saturday’s leg, Kopecký was 1:19.1 ahead of the third driver in class, Katsuta Takamoto.

Even in searing heat with temperatures far beyond 30 °C and extreme amounts of dust, ŠKODA FABIA R5 once again proved itself as very durable and reliable. Besides the two FABIA R5 evo works cars, two more ŠKODA drivers, Eerik Pietarinen and Pierra-Louise Louber, managed to place in the top five.

The afternoon stages were very challenging not only because of scorching heat, but also deepening ruts in the track’s surface, which put huge strain both on cars and crews. For Jan Kopecký and Pavel Dresler, things got even tougher when they had to drive part of the SS11 with unlatched hood blocking the view. Still, they managed to avoid losing much time. They even went six seconds faster compared to the first run of the stage.

“I forgot to latch the hood and it opened on the stage. On top of that, we almost rolled when I missed the braking point. We were very lucky!”, commented Kopecký. Even after these troubles, the last year’s WRC 2 Champion managed to keep his position and finished the Saturday’s leg in the second place.

Kalle Rovanperä won two out of three afternoon’s stages and keeps comfortable lead of Rally de Portugal. Before the final leg, he’s more than a minute ahead of his teammate Kopecký. “It was good. On this loop we made an optimistic tyre choice so the tyres are quite done. I have to say that the second run here is quite rough on cars, so it’s not very pleasant to drive fast”, said Rovanperä.

The mail goal for the last leg was to keep ŠKODA Motorsport’s FABIA R5 evo works cars on the first two places. The day’s programme includes two runs of the beautiful special stage Fafe, with an iconic jump that was crowded by spectators since early morning. Even the crews themselves were infatuated by the stage.

“This stage is really amazing. I know our goal is to just get to the finish, so maybe it’s not so enjoyable, but we are doing our best to have fun in the car”, described Kopecký. His teammate feels the same. “It’s not fun driving with a one-minute gap – it’s harder than going flat out! Today we can enjoy the stages and have fun!”, confirmed Rovanperä three stages before the finish.

In the remaining stages of the day, both drivers were just keeping their positions. However, even at a more careful pace, they didn’t give anything away to their competitors – in the penultimate stage, Kalle posted another best time, to a tenth identical with that of Mads Ostberg.

The premiere of ŠKODA FABIA R5 evo went great. The crew of Kalle Rovanperä – Jonne Halttunen won both the WRC 2 Pro category and the whole RC2 class. And, having avoided any serious trouble, they even managed to finish sixth overall. “Big thanks to the team – everything has been going well and they have worked really hard to get the car to the finish”, said fresh winner after the rally.

The second place, after a very consistent performance, went to Jan Kopecký and his co-driver Pavel Dresler. The private teams with ŠKODA cars had a successful weekend as well. Pierre-Louis Loubet was third in class and overall, seven FABIA R5s finished in the top ten. Among the most successful drivers were Henning Solberg, Eerik Pietarinen, Nikolay Gryazin and Benito Guerra.