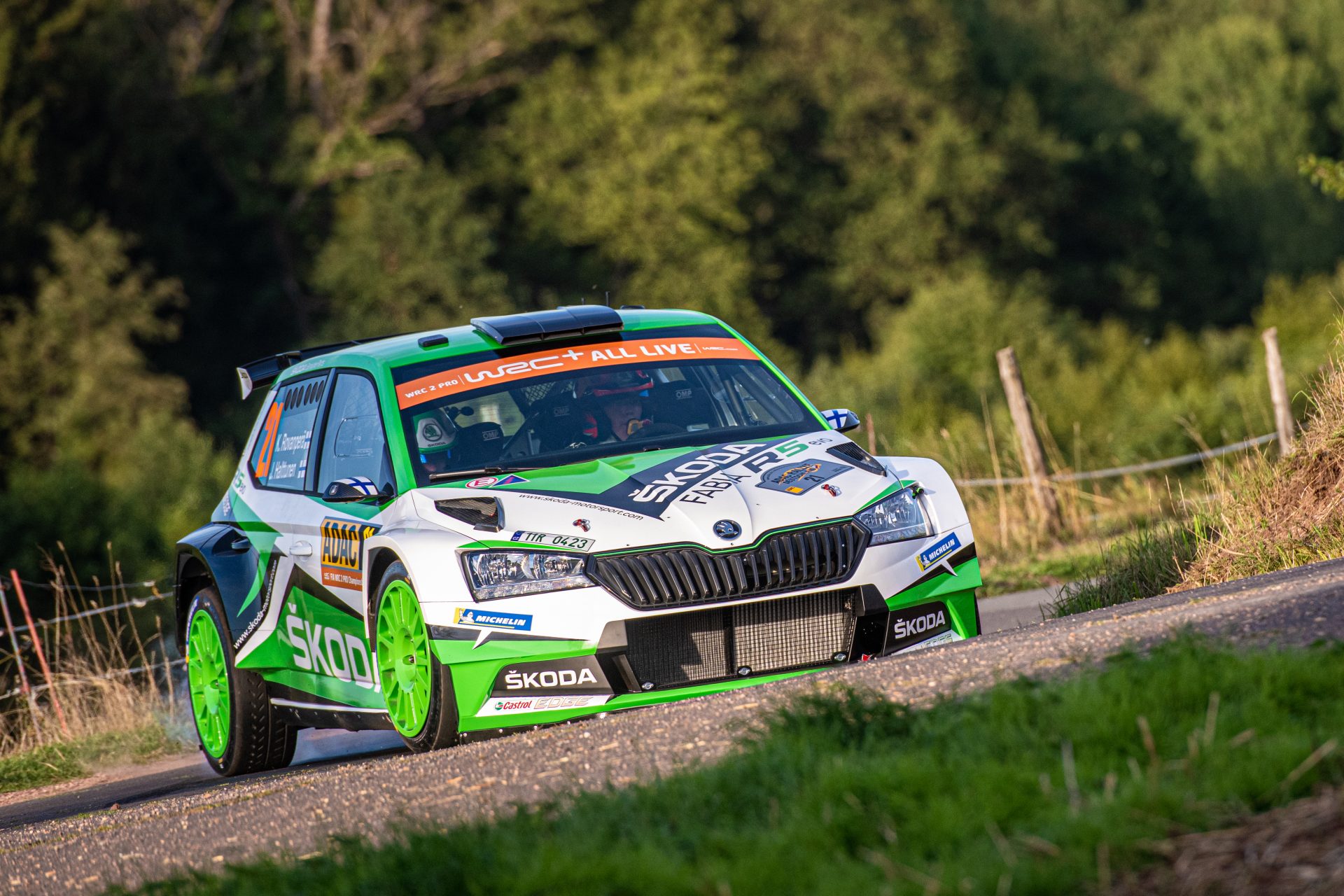 Since its debut at Rally de Portugal, the ŠKODA FABIA R5 evo has been collecting laurels everywhere it goes. The young Finnish crew of Kalle Rovanperä and Jonne Halttunen won in Portugal, Sardinia and Finland with the new car, following on from their victory with the first-generation ŠKODA FABIA R5 in Chile. This weekend, they are facing a new challenge – the second (and last) tarmac rally in the WRC 2 Pro calendar. Being a Scandinavian, Kalle is more used to gravel rallies, unlike his teammate Jan Kopecký, who is regarded as tarmac expert.

Both last year’s champion Kopecký and this year’s current leader Rovanperä will appear on the starting line in Germany, together with four private teams driving the ŠKODA FABIA R5 evo and six driving ŠKODA FABIA R5 rally cars. For the ŠKODA Motorsport works team, this rally is particularly special because of  the amount of Czech fans who’ll be present around its track.

Read more about Rally Deutschland in our recent article!

The two ŠKODA works cars made a great start to Germany’s round of the WRC 2 Pro, with Kalle Rovanperä dominating the shakedown right from his first run and steadily improving his time. His did his final run in 2:49.2, a second faster than the runner-up Jan Kopecký, who was in turn 0.2 seconds faster than the Ford-driving Eric Camilli in the third spot. A great start to one of the hardest rallies in the calendar!

On Thursday evening, the rally started with a Super Special Stage in St. Wendeler Land. The results mirrored those from the Shakedown, with Rovanperä being a second faster than Kopecký at 2:48.6. This time, though, a third FABIA R5 evo, driven by the local crew of Fabian Kreim and Tobias Braun, completed the 1-2-3 result. They did the first stage in 2:50.2, just 0.6 seconds behind Jan Kopecký and Pavel Dresler.

“At Barum we tried some different setups to test for this rally and they worked well. This stage is not so bumpy”, Jan Kopecký remarked after the first stage. His teammate Rovanperä was satisfied with his performance, but noted that Rally Deutschland certainly won’t be easy: “It will be much tougher than in previous events. The time is good.”

Kalle may have said that Rallye Deutschland would be much tougher to win than the previous ones, but he certainly didn’t seem to have a hard time during the Friday morning run. He posted the fastest times in the first two stages of the day, the SS2 Stein und Wein and the SS3 Mittelmosel. Only during the third test of the day was he beaten by his teammate, Jan Kopecký, who had placed third in both of the previous stages. The victory at the SS4 Wadern-Weiskirchen was enough for Kopecký to move ahead of Stéphane Lefébvre’s Volkswagen Polo GTI R5 and into second place in the RC2 class. Rovanperä is now more than 11 seconds ahead of the rest of the field.

Another two FABIA R5 evo drivers, Fabian Kreim and Marijan Griebel, are in 8th and 6th place, followed by Fabio Andolfi in his first-generation FABIA R5 in 9th place.

After the first two days of Rallye Deutschland, the ŠKODA Motorsport works drivers Kalle Rovanperä and Jan Kopecký held the first two places of the WRC 2 Pro category. The repetition of afternoon’s special stages didn’t change much in the WRC 2 Pro standings. Kalle Rovanperä once again won the first two stages of the loop in his category, noting that the afternoon run was even better for him than the morning’s part of the leg: “It went much better than the first time, at least in my opinion. At the end of the day, when the brakes are quite worn, it‘s not the best feeling for me.”

In the last stage of the day, the second run of Wadern-Weiskirchen, the young Finn ran into a bit of trouble for the first time, when a small mistake cost him some time and he dropped back to 2nd position in the WRC 2 Pro, behind Jan Kopecký. Still, he retained his first place overall, even increasing his lead to 19.6 seconds ahead of Jan Kopecký. “It wasn’t that good. I messed up the first corner and went wide onto a gravel bank. However, I am really happy with the day – we went really well.”

Jan Kopecký did a great job as well, posting four second-best and two best times in the WRC 2 Pro category, keeping his second place. He was satisfied with his performance, but after SS5, he commented that whatever he does, he’s not able to catch his young teammate: “It’s a little bit more slippery in some places so we are trying not to take any risks. For sure, we would like to try and catch Kalle but at this moment it’s just not possible!” He commented on his speed again one stage later: “I think we can’t do any more. If I push more then small mistakes would creep in. I cannot go any faster.”

The two German drivers Fabian Kreim and Marijan Griebel, for whom this is their first event in the ŠKODA FABIA R5 evo, are currently in 3rd and 4th place in the WRC 2 category, reserved for private teams. Behind them, in the 5th place, is Fabio Andolfi, driving a ŠKODA FABIA R5.

During the first two days, the ŠKODA works crews posted the best times among the 27 R5 cars in six out of the seven stages.

Saturday is the longest day of Rallye Deutschland. Unlike a typical leg, where morning stages are repeated in the afternoon, it includes two pairs of stages, each repeated straight away – SS1 and SS2 repeated as SS3 and SS4, and SS5 and SS6 repeated as SS7 and SS8. This presents a challenge for the teams; the morning stages take place on country roads in the Saarland and the Rhineland Palatinate Region, while in the afternoon, the crews have to deal with the the notorious military area of Baumholder. Once again, the abrasive concrete roads, lined with concrete blocks, the infamous “Hinkelsteins”, would prove to be a tough test for both men and machines.

Kalle Rovanperä and his co-driver Jonne Halttunen began the day with some bad luck. Starting the day as leaders of both the WRC 2 Pro and the whole RC2 class, they went off the road on the last corner of the morning’s first stage and got stuck in the undergrowth. Although spectators came to help, there weren’t enough of them in that spot and in the end, the recovery took more than four minutes. This meant that the Finns dropped from the lead to 4th position. “It was a stupid mistake. I didn’t have it as being narrow on my notes, and went too wide and got stuck in the grass. I feel sorry for the team,” Kalle Rovanperä explained. It was just not his morning as, only one stage later, he slid off the road again after a jump and lost another 23 seconds to his teammate Jan Kopecký – who was now comfortably leading the WRC 2 Pro category. “We have to be really focused because the stages are very tricky – there is a lot of loose gravel everywhere,” the recently crowned Czech Rally Champion commented during the midday rest halt at Lake Bostal.

For the ŠKODA customer teams, the morning run was a successful one. Both of the German drivers in the ŠKODA FABIA R5 evo, Fabian Kreim and Marijan Griebel, moved up to the front of the WRC 2 category, followed by Fabio Andolfi in a ŠKODA FABIA R5, completing the 1-2-3 for ŠKODA cars.

In the afternoon, the action moved to the military area of Baumholder, well-known for its Panzerplatte special stages. Its combination of rough surfaces and “hinkelsteins” – concrete obstacles designed to stop tanks and thus well-able to stop rally cars – makes for a special challenge. Jan Kopecký knows this well, as he suffered punctures here in both 2017 and 2018.

This year, Kopecký started out really well, posting the best time in the first stage of the afternoon, the SS12 Arena Panzerplatte. His teammate, Kalle Rovanperä, was close behind him, with a 1.2 second gap, and made his way up the charts after the morning’s mishap. In the first run of the Panzerplatte stage, the two works drivers placed second (Rovanperä) and third (Kopecký) in the WRC 2 Pro, while Marijan Griebel and Fabio Andolfi took the two top spots in the WRC 2 category.

Among the privateers in the WRC 2, four out of the top five cars are ŠKODAs. Two ŠKODA FABIA R5 evo drivers, Kreim and Griebel, are first and second, followed by ŠKODA FABIA R5 drivers Andolfi and Gryazin in 4th and 5th place.

The final leg of Rallye Deutschland took the crews back to the picturesque vineyards around the river Mosel. The leg included two pairs of stages, run twice each. The 28.06-kilometre-long “Grafschaft”, the second-longest stage of the rally, provided an early wake-up for the crews, as it started at 7:46.

The challenge for the two ŠKODA works crews was clear: recently crowned Czech Rally Champions Jan Kopecký and Pavel Dresler had to defend their lead in the WRC 2 Pro category. Their teammates Kalle Rovanperä and Jonne Halttunen, who had been in the category lead until their little off-road excursion on Saturday morning, had to secure their third place in the WRC 2 Pro category for valuable championship points.

Although Kopecký started the day at a cautious pace, he still managed to increase his category lead. “The stage was hard – there was a lot of gravel on the road and some muddy parts in the forest. So I had to be really careful,” he said. His young teammate Rovanperä added: “In the morning, it was quite slippery on the hard tyres. I was cautious, but it was good.” Having said that, he emerged as the fastest driver of the category.

Eventually, Jan Kopecký and Pavel Dresler defended their lead until the very end, claiming their first WRC 2 Pro victory in the FIA World Rally Championship 2019. Kalle Rovanperä and Jonne Halttunen took no risks with their ŠKODA FABIA R5 evo. With a third place in the WRC 2 Pro category they secured valuable championship points in both the drivers’ and the manufacturers’ overall standings.

In the WRC 2 category for private teams, Fabian Kreim (the German champion in 2016 and 2017) and the reigning German champion Marijan Griebel, both supported by ŠKODA Auto Deutschland, secured a double victory on their first event driving the new ŠKODA FABIA R5 evo.

ŠKODA Motorsport boss Michal Hrabánek was delighted at the podium near Lake Bostal: “Congratulations to Jan and Pavel who brought home this victory thanks to a great performance. We are proud that our new ŠKODA FABIA R5 evo remains undefeated in its category in the FIA World Rally Championship. This is a big reward for the great work the whole team has done. After their mishap, Kalle and Jonne made the most of the situation by finishing third in the WRC 2 Pro category and collecting valuable championship points!”