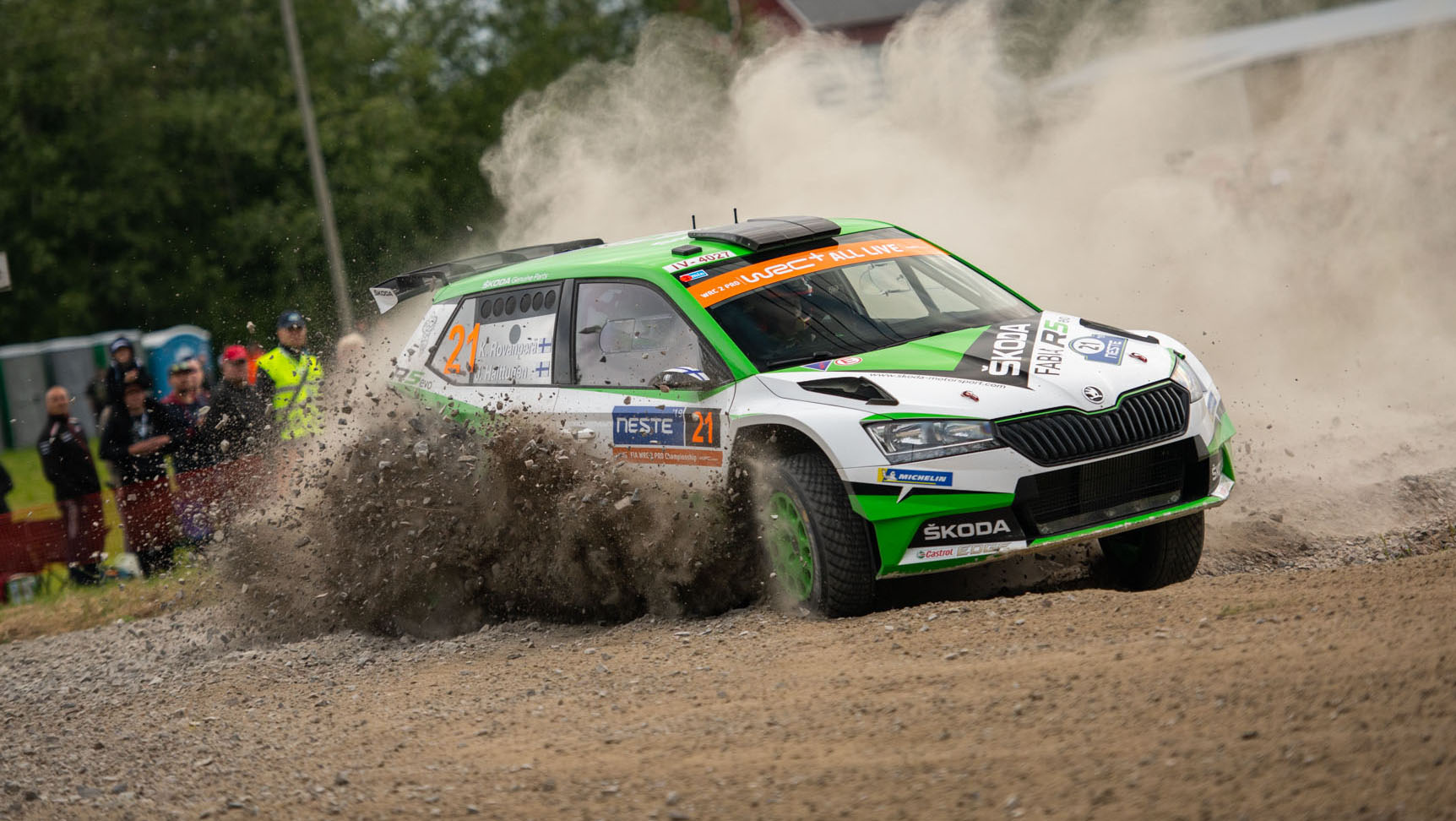 After winning the first two rallies with the new FABIA R5 evo in Portugal and Sardinia, the ŠKODA Motorsport works team is about to enter the fastest rally in the WRC calendar. Two ŠKODA Motorsport crews are going to fight for points in the WRC 2 Pro category: Kalle Rovanperä and Jonne Halttunen in a works car and Eerik Pietarinen and Juhana Raitanen driving a car of TGS, the first customer team to take delivery of revamped ŠKODA FABIA R5 evo. Last year, Pietarinen won the WRC 2 category at Rally Finland.

The main rival for ŠKODA Motorsport in the WRC 2 Pro category will be Eric Camilli, who is entering a brand new Ford Fiesta R5 Mk2. Overall, 17 ŠKODA cars are going to appear in the RC2 class, including four examples of modernized FABIA R5 evo. Besides Rovanperä and Pietarinen, Pierre-Louis Loubet and Henning Solberg are driving those cars.

In Thursday’s shakedown, it was Kalle Rovanperä who took the fastest time in the RC2 class. At 2:01.1, he beat his colleague Pietarinen by 0.6 seconds. The third best time went to FABIA R5 evo as well, thanks to Pierre-Louis Loubet. For many drivers, though, the shakedown was the first “hot” drive with their new cars and they mainly focused on fine-tuning the setup. We can only expect full pace in the Friday’s special stages.

In the evening’s super-special stage, the 2.31 kilometre-long Harju, Kalle Rovanperä was once again the fastest in his class. He was 1.1 second ahead of runner-up Johan Kristoffersson, with Pierre-Louis Loubet in the third place, followed by Eerik Pietarinen, Emil Lindholm and Henning Solberg. All four FABIA R5 evo crews finished in the top six.

On Friday morning, Emil Lindholm with Volkswagen Polo GTI R5 made for a little surprise on the Oittila stage. He managed to beat Kalle Rovanperä by almost three seconds, more than 10 seconds ahead of the rest of the field. But for the rest of the morning, Rovanperä dominated his class. He won the following four stages and arrived to the afternoon service with almost 20 seconds on Pierre-Louis Loubet in second place, also on FABIA R5 evo.

On the other hand, Eerik Pietarinen didn’t have much of a luck and had to retire after a mishap. The second place in the WRC 2 Pro category then went to Eric Camilli on Ford Fiesta RS MK2, who is almost one and a half minute behind Kalle.

The afternoon run was quite similar to the morning in its outcome. In all five special stages, the works crew of Kalle Rovanperä and Jonne Halttunen finished first in the RC2 class, while Pierre-Louis Loubet and Vincent Landais celebrated the second place three times. This meant that Rovanperä finished the first full day of Rally Finland in the first place, with 31.6-second lead to Loubet. Stage by stage, Nikolay Gryazin and Yaroslav Fedorov moved up to the third spot, completing the 1-2-3 result for ŠKODA cars. In the WRC 2 Pro category, Rovanperä increased his lead on Camilli to two and a quarter of a minute.

“It has been an interesting day – we had a really good fight with the other guys in the morning and it was good to find some setup changes in the evening service. Tomorrow, we will see how it works,“ said Kalle Rovanperä.

In the Saturday morning run, Kalle Rovanperä and Emil Lindholm shared an equal number of stage victories, with each of them posting two best times. This, however, changed nothing about the standings at the top of the RC2 class. Kalle just increased his lead to the Pierre-Louis Loubet in second position to more than a minute. Nikolay Gryazin in the third place was replaced with local driver Jari Huttunen. In the WRC 2 Pro, Eric Camilli’s loss to the leading Rovanperä increased to three and quarter of a minute.

„This morning has been nice – the setup is correct so the car is much more enjoyable to drive. I try not to take any big risks and just enjoy the driving. I have never driven on such slippery stages in Finland. It’s fine – we don’t have to push, but it would be nice to know where we can find some more grip”, explained Rovanperä about his morning.

On Thursday and Friday, the works crew and ŠKODA Motorsport engineers tried hard to find the perfect setup of their car. The effort paid off, and on Saturday afternoon, Rovanperä had only praise for its handling. “It’s incredible. The roads are in really good condition and the car is working well. I am just having fun behind the wheel!” he concluded with satisfaction. The results reflected this as well, as he claimed three victories and one second place in the remaining four stages.

Behind him, things were pretty busy. Pierre-Louis Loubet, who was showing a very confident performance until that time, went off the road in the last stage of the day and fell to the sixth place. This allowed Nikolay Gryazin, who got back ahead of Huttunen, to take the second place, two and a half minute behind Rovanperä.

In the four stages of the final leg of Rally Finland, the ŠKODA Motorsport works crew only had to defend its lead. Even so, Kalle Rovanperä and Jonne Halttunen posted two second best and two third best times. “We’re playing it safe, stage was in a great condition but as we’re not in any battle we just need to get to the finish!” quipped young Finnish driver. The works crew took a dominating victory in RC2 class, more than two and a half minutes ahead of the fastest competitor and with the lead of almost five minutes in the WRC 2 Pro category. After Chile, Portugal and Sardinia, it is the fourth victory in a row for ŠKODA Motorsport.

ŠKODA Motorsport boss Michal Hrabánek praised the Finns: “Kalle and Jonne impressed me with their strong nerves. They met the high expectations exceptionally well and mastered the challenge in front of their fans in the best possible way. From our rich experience we know how extremely demanding it is for Finnish crews to shine at their home event”.

ŠKODA also claimed the second place in the RC2 class and victory in the WRC 2 category, thanks to the performance of Nikolay Gryazin and his co-driver Yaroslav Fedorov on FABIA R5. Seven ŠKODA cars finished in the top ten, three of them being the updated FABIA R5 evo.